What’s your happy place? Maybe it’s gliding down Stratton Mountain on skis, or stalking a prize trout in the Battenkill. Or maybe it’s just hanging on the porch with your best friend, your dog. Whatever it is, chances are Chandler 4 Corners will have some home décor that will, in the words of organizer extraordinaire Marie Kondo, spark joy.

“We want to connect with our customers, and our products usually reflect their passions and their happy places, whether it’s a ski resort or the shore,” said company co-founder Henry Chandler. “We tend to do very well in places where people are relaxing and getting away from it all, whether it be Vermont, Nantucket, the coast of Maine, or Lake Tahoe.” 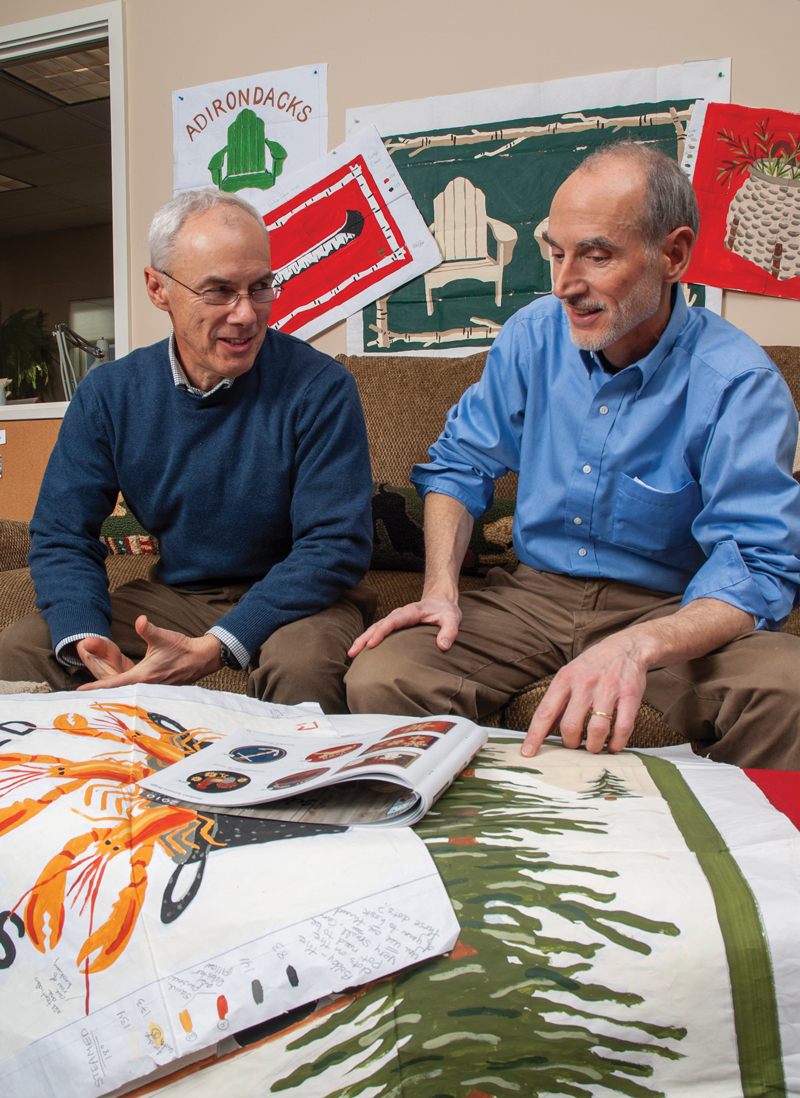 In fact, Chandler 4 Corners, headquartered in downtown Manchester, sells tens of thousands of home accent pieces to more than 1,000 stores and catalogues across the United States and abroad, an extraordinary testament to their quality, design, and mass appeal. But co-founder David Chandler said the popularity of the company’s products is also tied to another factor: “It’s that wow moment,” he said. “The feel of the pillow, the look of the rug, the color motif, and the price point. I like to think it’s a combination of factors that resonates.” 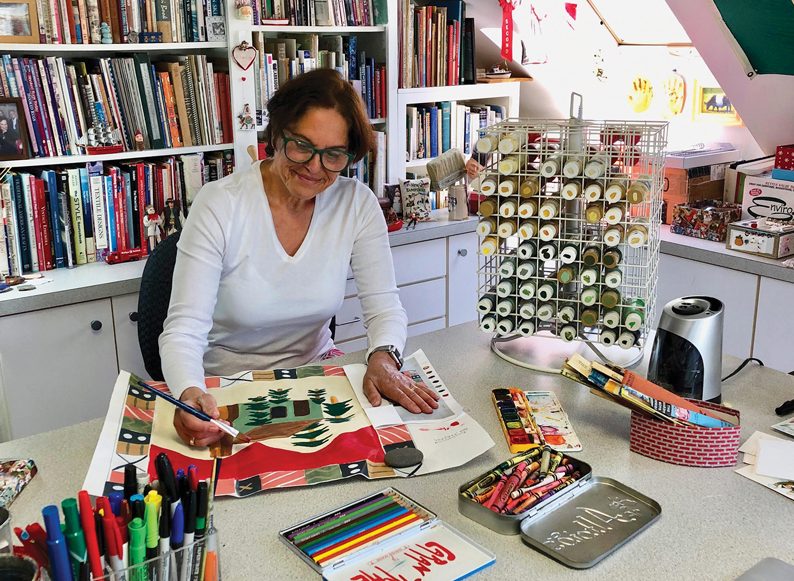 The company’s motto, Accent Your Life, reflects the more than 700 products it currently produces: Vermont-designed, hand-hooked pillows and area rugs, accent furniture, throw blankets, chair pads, and many other accessories. The products showcase a “love for outdoor adventures, coastal living, and the country life,” the company says. The playful designs depict everything from a skier schussing down the slopes to a whale bobbing atop a deep blue sea. There are Vermont moose and bears, Montana bison, Texas longhorns, and coastal lighthouses. Lumbar pillows are emblazoned with the names of special places, Vermont, of course, with a background of the Green Mountains; Texas with a bucking bronco; and Maine with a red lobster. Others advise “Gone Fishin’,” “Cabin Fever,” “Ski In–Ski Out,” and “Life’s a Beach.”

And then there are the dogs. “We have a lot of dog designs, mostly black Labs. People love black Labs,” said Laura Megroz, lead designer for Chandler 4 Corners. “Dogs are a huge part of our offerings,” added Henry Chandler. “Dogs play so many roles in our lives. They are surrogate children. They give unconditional love. Dogs are the glue that holds the family together.” There are dogs romping in the snow, peeking out of an old Volkswagen Bug, sitting in a canoe, and piloting a motorboat. In fact, dog designs make up about 10 percent of the company’s sales. Only Christmas-specific products do better.

All of the pillows, rugs, and other products are stored and shipped from Chandler 4 Corners’ 12,000-square-foot warehouse in downtown Manchester, which also houses 2,000 square feet of office space. Locals know that the first Saturday in December is the company’s giant warehouse sale and as many as 200 customers will line up outside waiting for the doors to open. And although the pieces are manufactured overseas, most of the design ideas come from the mind of Londonderry textile artist Laura Megroz, who teamed up with Henry Chandler 20 years ago, a few years after she created her very first moose pillow. “I made it from pieces of felt and fabric that I would cut up from old shirts and things that I found in thrift shops,” she recalled. “I’d applique them together, then sew on buttons. If I made a moose, I’d put a button necklace around his neck.”

Laura’s friends encouraged her to try to sell her crafts, and so she made 25 moose pillows and brought them to the old T.P. Saddleblanket store in downtown Manchester and asked the shopkeeper if she would be interested in selling them. “It was so brazen; who does that?” Laura laughed. “But she said, ‘I love them,’ and took all 25. I thought, ‘This is a good sign.’”

Emboldened by that success, Laura made more pillows and took them to craft shows where they flew out of her booth. By 1996, she felt confident enough to send a small sachet pillow and pictures of her other designs to the buyer at Gorsuch Ltd., a high-end ski emporium in Vail, Colorado. “Within a week they called and said, ‘We’d like to order some pillows,’ and I said, ‘Great how many?’ They said 250 of the 18-inch and 1,000 of the little sachet pillows and I thought, ‘Oh my God, what have I done?’” 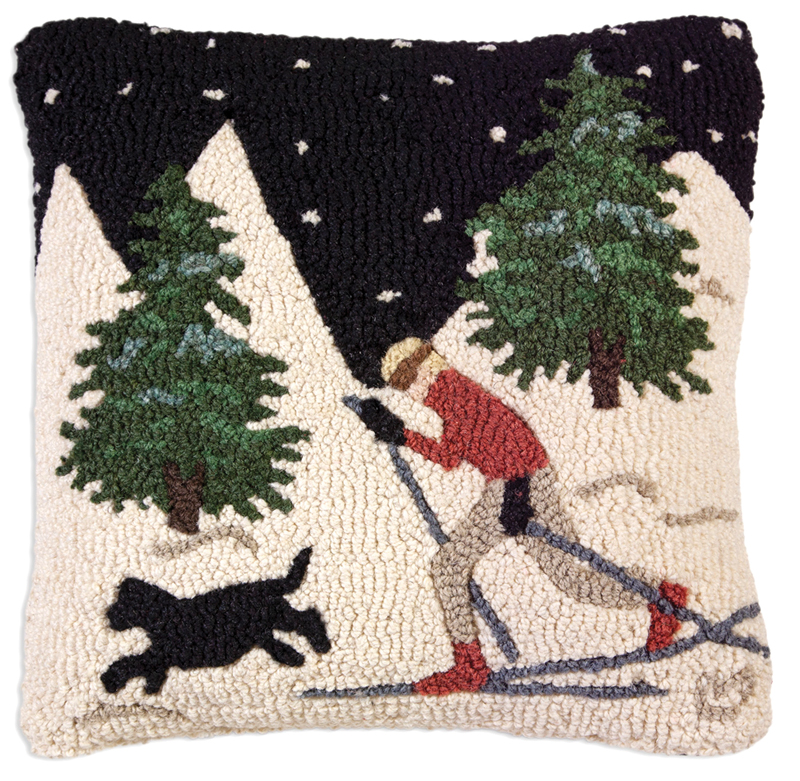 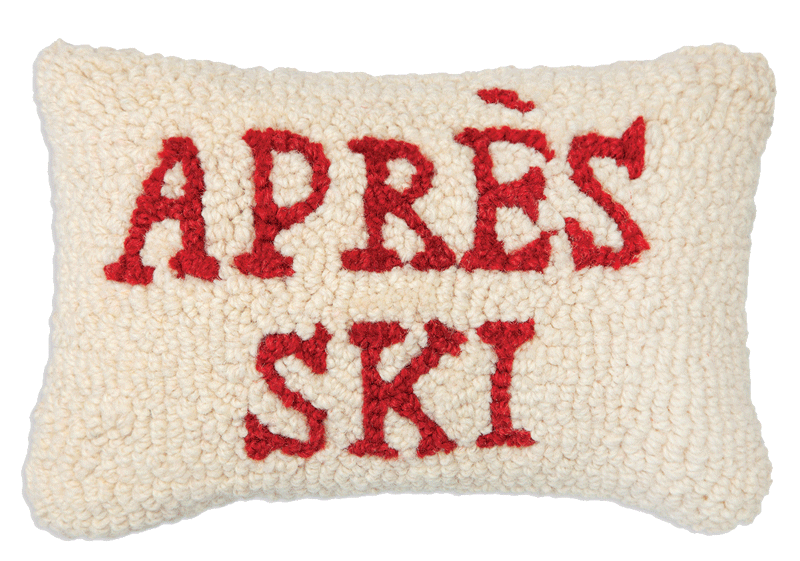 Laura spent that summer sweltering in her workshop, surrounded by wool, but managed to fill the order. A year later, at a Vermont products trade show, an overwhelmed Laura met Henry Chandler when he came to check out her booth. “I said, ‘Henry, can you help me and take this away from me?’ and he said, ‘I’d love to.’”

Serendipitously, Chandler 4 Corners was also at a turning point when Henry ran into Laura that day. The company had recently lost its lead designer, Susan Sargent, who had gone out on her own and continues to be a successful rug designer. Henry realized that Laura’s artwork would mesh perfectly with the hand-hooked pillows and rugs the company was beginning to develop in its new manufacturing facility in India. “We had started doing rugs with Susan Sargent, but they were more of a flat-weave style,” Henry said. “The nice thing about hooked rugs is that they allowed for a lot broader design opportunities. We could do rugs with skiers, rugs with whales and sailboats. It was much more painterly, whereas a flat-weave rug woven on a loom had to be geometric, largely just straight lines.”

Up to that point, Chandler 4 Corners had success but hadn’t found its true niche. Henry, who had started out in business as a custom sign maker in Dorset and his brother, David, who had spent 10 years overseas working for a religious relief organization, began the company back in the early 1990s. Their plan was to showcase Vermont artistry and craftsmanship, and they had marketed numerous different textile products before teaming up with Laura. “Henry came to my studio and took everything from me, all my designs, patterns, buttons. It was hard for me, like giving up your baby for adoption, but off he went, and started manufacturing my pillows,” Laura said. “He took them to the New York gift show where they were very successful, came back, and said, ‘Okay, we need to design a rug to go with the pillow and I thought, ‘Oh my God, he thinks I know what I’m doing.’”

Despite her trepidation, Laura designed what would be the company’s breakthrough product: a braided rug with a center of hooked wool in a half-dozen different designs. “Henry brought them to the next New York gift show where they were a big hit,” she said. “Plow & Hearth put the moose rug on the cover of their catalogue and it was a great seller. It put us on the map.” Laura then came up with the idea to produce a pillow version of the rug, and in 2001, Chandler 4 Corners debuted what would become its signature product: the first massproduced, handcrafted hooked wool pillow. “We never looked back,” the designer said.

Chandler 4 Corners pillows and rugs have been featured in dozens of national catalogues during the years, including L.L. Bean, Orvis, William Sonoma, Sundance, and Crate & Barrel. And the inspiration for Laura Megroz’s creations is often right outside her home studio in Londonderry. “They say write what you know; I draw what I know,” she said. “I look out my window at Stratton Mountain, so I do a lot of animals, a lot of nature, a lot of skiing.”

Added Henry Chandler: “Laura has her finger on the pulse of what people like, where things are going, and what our customers are excited about. No one goes out looking for a Chandler 4 Corners pillow but if they happen upon one in a store or online they might think, ‘Oh, isn’t that wonderful,’ or ‘That’s just like my dog,’ or ‘My friend would love that,’ and they buy that pillow to sit on a couch. It’s affirming of their lifestyle.” Laura believes the pillow and rug designs invoke a sense of nostalgia for people, a return to simpler, happier times. “They make you feel comfy, cozy, and like part of the past,” she said. 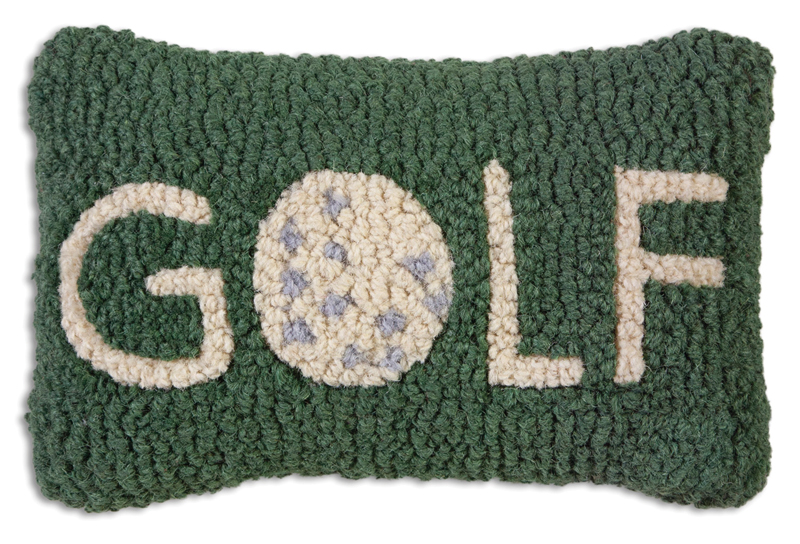 Another draw is the versatility of Chandler 4 Corners’ products. Many of the pillow designs can be personalized, and there is a large line of holiday-themed pillows and rugs that can change the look of a room in minutes. “At our house we pull out a dozen Christmas pillows, our holiday-themed hearthside rug, and put the Chandler 4 Corners stockings on the mantle, and bingo, it’s Christmas,” Henry Chandler said. “In the summertime we bring out the more country-summery pillows and coastal homes can bring out the whale rugs and sailboat pillows. It all makes a huge impact.”

In addition to the variety of designs, Henry said customers appreciate the quality of the company’s goods. “All of our products are made from the finest materials,” he said. “And they are 100 percent guaranteed.” And the fact that they are all handmade adds a little something special, he added. “A handmade product is much more individual, like a work of art. We might make 100 pillows with the same design on them but each one is unique because it’s handmade. The slope of a dog’s back or the expression on his face might be a little different. Each one reflects individual care and an artist being proud of their own work.” David Chandler, whose overseas relief work was critical in helping the company launch its manufacturing facility in India, said he has seen the way the work has helped enrich the lives of its foreign workers. “The first time I went to our hooking facility it was an old beat-up building with an empty courtyard,” he said. “Three years later, the courtyard was filled with bicycles, and 10 years later it’s filled with motorcycles and the owner of the facility had built a new house behind the factory. So I feel like we haven’t gone too far from the vision of making a profit and at the same time doing good.” 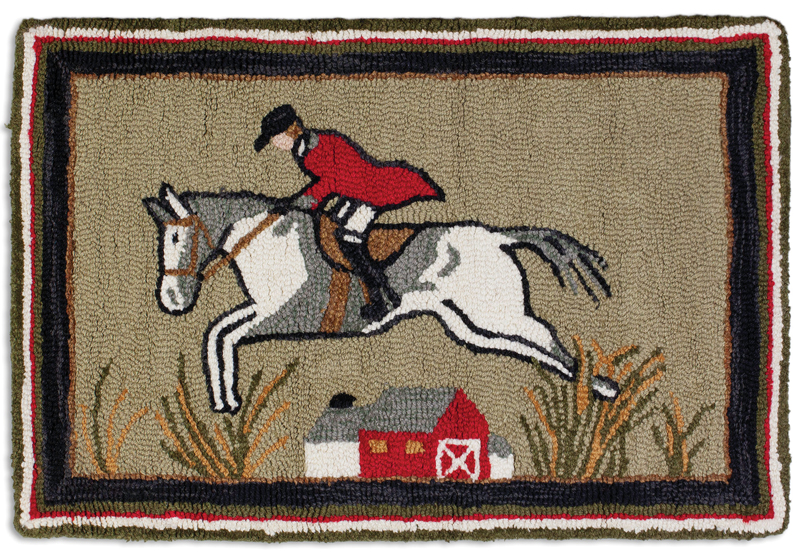 From its humble beginnings, Chandler 4 Corners has racked up tens of millions in sales and filled homes from coast to coast with fun and unique accent pieces. “There’s a whole sense of family rootedness and a sense of belonging that we hope we are generating when people buy our stuff,” said David Chandler. “They’re grounded in those good, solid values we all dream about. It’s family. It’s shared memories and traditions. It’s a way of reconnecting to our roots.”

And, of course, it’s the dogs.