When she asked her dad to help her find it, he just shrugged and mumbled something about the attic.

He had not been any help last year either. Since his wife’s death, a long 18 months ago, Mr. Levy had shown no interest in holidays. Their sparkle had been snuffed out by his sorrow. 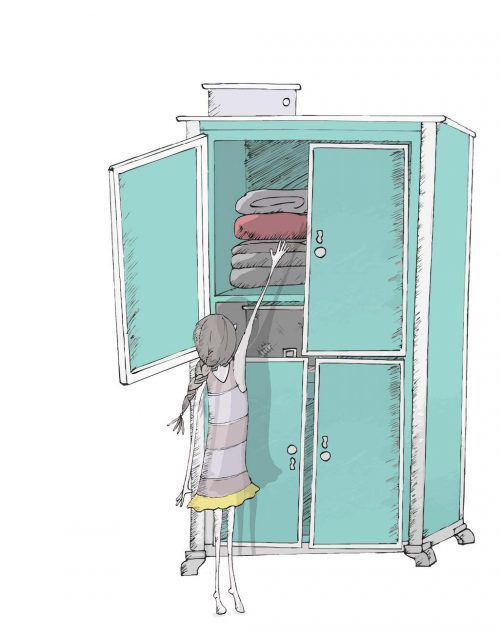 He still prayed at the synagogue, but celebrations were another story. Last Hanukkah, Rachel and her brother Sammy had spent the week with their cousins in Minneapolis, but this year, the Levy family would be home.

Still, Rachel was not discouraged.

She had saved enough money from her weekly allowance to buy gifts for her father and brother, along with dreidels and candles from the synagogue gift shop.

Now, her only problem was to locate the family menorah.

Except for a dollar or two, her money was spent. A new menorah was out of the question, and she didn’t dare bother her father again about the old one. Rachel remembered how much her mother had loved that menorah. It was one of the few possessions Rachel’s grandmother had brought with her to America. But if her father did not want her to use it, he must have a good reason.

Rachel decided she would concentrate on making latkes instead. She watched carefully in Hebrew school when Mrs. Rosenblum showed the class how to make the batter. She remembered watching her mother follow the very same steps each Hanukkah.

Those times had always been very special.

Cooking was fun, but even better was listening to her mother tell wonderful stories about her own childhood.

Without fail, Sammy would ruin it by barging into the kitchen and demanding his turn to stir. The lovely calm would turn to chaos. It seemed that all Sammy had to do was look at the bowl, and batter splattered from ceiling to floor. 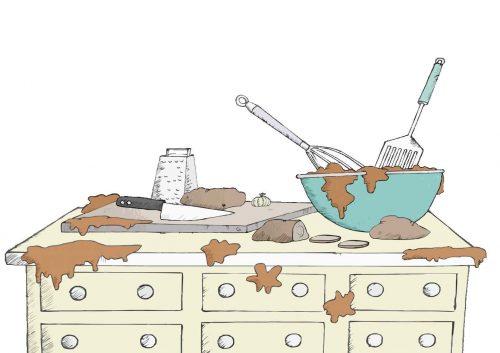 But Rachel’s mother’s latkes were always scrumptious. She was not certain her own potato pancakes could match up, but she was
determined to try.

The afternoon before the first night of Hanukkah, Rachel stopped by Weintraub’s grocery for a bag of potatoes, but she couldn’t find a single one. The bin was empty.

He disappeared into his back room.

“It isn’t much,” he admitted. “All of my shoppers kept throwing it back into the bin. It’s not rotten. It just looks funny. I suppose one potato won’t make a lot of latkes, but it’s the best I can do. Take it with my compliments.”

Rachel studied the curious potato for a moment and suddenly screamed with delight. 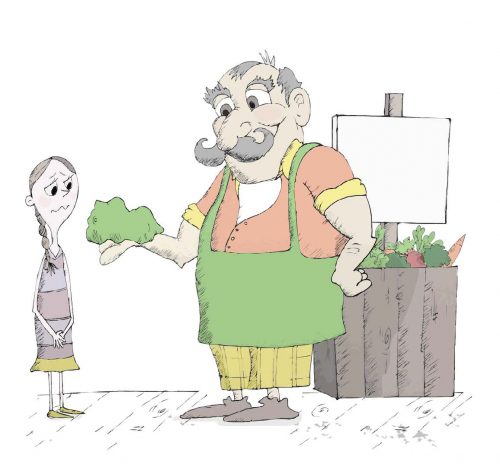 As Rachel rushed out of the store, Mr. Weintraub just shook his head and smiled.

Sammy greeted his older sister as she walked through the door.

“Where have you been? What’s in the bag?”

“I was at the grocer’s to buy potatoes,” she answered.

He grabbed the bag from his sister’s hand, and the odd potato fell to the floor.

Sammy made a face. 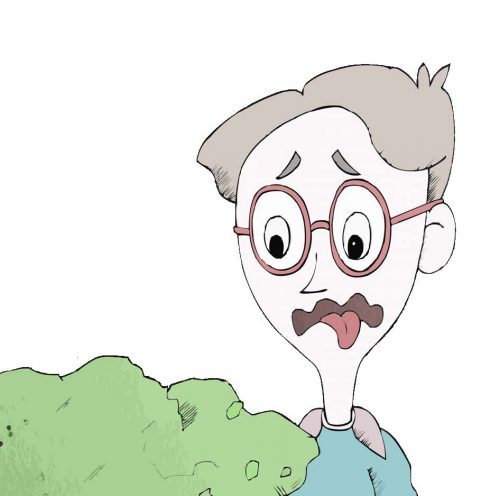 “Come into the kitchen and you’ll see.”

Sammy followed Rachel to the sink and watched her carefully scrub and dry the mysterious potato.

Rachel could no longer contain her excitement.

“Don’t you see, Sammy? It’s perfect. For some reason, Daddy doesn’t want to use our beautiful menorah, and I don’t have money to buy a new one. Until this afternoon, I had completely given up on lighting candles, but when I saw this potato, I remembered a story Mommy used to tell me. She always said we were lucky to have such a beautiful Hanukkah menorah. When her Daddy was a little boy, his family was so poor they couldn’t afford a real one, so they used a potato to hold the candles.”

That evening, before the family sat down to dinner, Rachel quietly reminded her father that it was the first night of Hanukkah.

Mr. Levy smiled and said, “Yes, honey, I haven’t forgotten. In fact, this afternoon I spoke to your Uncle Louis, and your Hanukkah treat is all arranged. You and Sammy are flying to Minneapolis this weekend for a wonderful celebration.”

“That’s great!” Sammy piped up, “But we don’t have to wait. Come into the kitchen. We’ve got a surprise for you.”

Mr. Levy did not know what to expect, but when he saw the odd potato holding candles for the first night of Hanukkah, tears filled his eyes.

His voice trembled as he spoke. “Children, it’s beautiful. Your mother would be very proud. Let us light the candles.”

Together they chanted the blessings as Rachel lit the candles.

After dinner, they played with the dreidels Rachel had bought and congratulated her on the presents she had chosen.

At bedtime, Rachel confessed to her father that she, too, would like a special Hanukkah gift.

Mr. Levy smiled. “That seems only fair,“ he said. “Anything in
particular?” 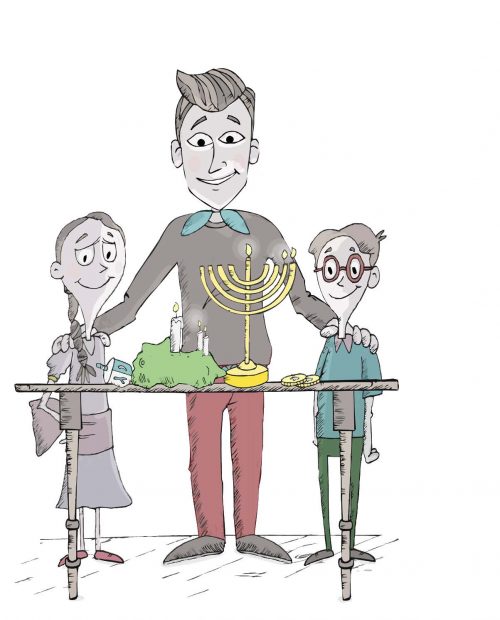 “Yes, Daddy. Please help me find our Hanukkah menorah. The
potato is nice, but it’s not the same.”

“You’re right, Rachel,” he said. “Tonight, I realized how much I, too, miss Mommy’s beautiful menorah. We’ll look for it together in the morning.”

The next night the family chanted the blessings for the second night of Hanukkah. Standing side-by side were two very beautiful menorahs.

1982 marked the beginning of my writing career. My very first show, Me, Myself, and I, was playing at Kansas City’s family theater, The Coterie. After one of the performances, a woman in the audience approached me. She asked if I would write (and read on air) an original story for Hanukkah for her local TV series. Without missing a beat, I said, “Yes!”

The day we televised the show, everyone got a real kick out of the story’s title, The Odd Potato. I remember leaving the set, and someone yelling out, “You should get that published!”

Easier said than done for an unpublished writer, but I took the advice to heart. I remembered a student magazine from my Hebrew school days called The World Over. I figured my story was perfect for a future December issue and mailed the editors my typewritten manuscript—if you can call three-and-a-half pages a manuscript. Several weeks later, I received those three-and-a-half pages back in a manila envelope with a polite form letter.

“Thank you for your submission, but after 44 years, The World Over is going out of print.” I remember thinking, “I only had 44 years and missed the deadline!” Yes, I was frustrated but thought, “That’s that.” What happened next is one of those unexplainable moments in life. If I used it as a plot device, critics would write, “Contrived! Unbelievable! Nonrealistic!” Still, it really happened.

I stood in my kitchen with the empty manila envelope in hand, ready to throw it into the trash bin. Suddenly, I stopped. To this day, I don’t know why I decided to stick my hand inside the envelope again… as if I missed something. But, I did—and found a tiny sheet of paper stuck to the bottom. On it was a short note from one of the editors. “I’m sorry I can’t help you, but I think your story has promise.” Below, she listed eight book publishers. Did I understand correctly? An editor at The World Over was suggesting my short story had potential to become a picture book?

Unlike today, a writer then could only submit her work to one publisher at a time. For the next 10 months, my three-and-a-half pages (via snail mail) “made the rounds.” Seven rejections later, only one name remained on the list. I did not hear anything for a couple of months. Then, one balmy September afternoon, I saw a manila envelope sticking out of my mailbox. My heart sank. I automatically assumed inside were my returned three-and-a-half pages accompanied by the eighth and final rejection. I stood there in shock as I read (and re-read…and re-read) the acceptance letter! The publishers of the Maryland-based Kar-Ben Copies hoped I would “allow them” to publish a picture book of my heartwarming story.

Cut to the chase. In 1984 (35 years ago), The Odd Potato entered the world of Hanukkah picture books. For the next several years, I would be sought out for book signings and lectures in cities around the country. Canadian Public Broadcasting asked to read The Odd Potato on air as part of their “favorite holiday stories series” and friends reported “book sightings” of The Odd Potato on three different continents. I even remember a personal note from someone in New Zealand. The little story that no one wanted found a place in libraries, schools, book fairs, and homes around the globe.

Of course, 1984 marked another significant event in my writing career. Earlier that year, The Coterie produced my second musical, Rotten Apples. This time, my older sister Gail was my writing partner. She wrote the music; I wrote the book and lyrics. We discovered we had a knack for writing songs together.

When I received my first copy of the picture book and saw the masterful illustrations by artist Katherine Kahn, I had an epiphany. The Odd Potato had the makings of a holiday musical. Of course, I would need to expand the plot. The characters, Rachel, Sammy, and their dad each needed a separate storyline. I called Gail; she loved the idea. After all, the original short story was inspired by our dad’s own childhood experience during the Great Depression. To us, The Odd Potato will always be more than a story; it’s our family’s history. The Bluestone Sisters went to work.

In 1986, the first three musical productions of The Odd Potato appeared on Jewish Community Center stages in Seattle, Hartford, and St. Paul. In the years to come, I would write multiple adaptations for community, regional, and museum theaters. A Chicago television special earned me an Emmy® Award for “Outstanding Achievement in Children’s Programming.” Hallmark issued a greeting card for Hanukkah (inspired by The Odd Potato), and the musical debuted in New York City at the Merkin Concert Hall, starring a young girl named Jamie Lynn Sigler, who just a few years later would reach fame as Meadow on the hit television series The Sopranos. Eventually, I would reinvent the show, and rename it Broadway Sings The Odd Potato, starring television favorites, Frank Gorshin and Charlotte Rae, plus Grammy® Award winner B.J. Crosby, directed by four-time Tony® Award nominee Randy Skinner. Major media covered that holiday event at Symphony Space in New York, including The New York Times—twice. Even Voice of America crafted a special piece with all the stars that aired on stations throughout Europe.

The album is, indeed, a little gem of a musical with sound effects, story narration, dialogue, song, and even some world-class tap dancing.

Even now, so many years later, when the original picture book is out of print, the story and music prevail. In the last several years, what a heady experience to hear select songs from the score performed on the concert stages of Carnegie Hall and Lincoln Center. Of course, it’s always a kick to hear one of the tunes on the airwaves.

I guess that’s the long and short of the last 35 years. Not too shabby for a three-and-a-half-page story. Still, I hope at the 50-year mark, I can report even more exciting news. For now, I simply thank my lucky stars that I rechecked that manila envelope! 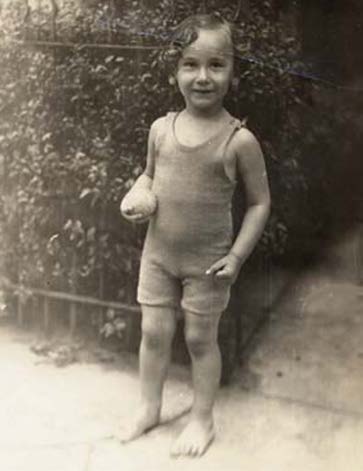 Herman Bluestone, the child who inspired The Odd Potato