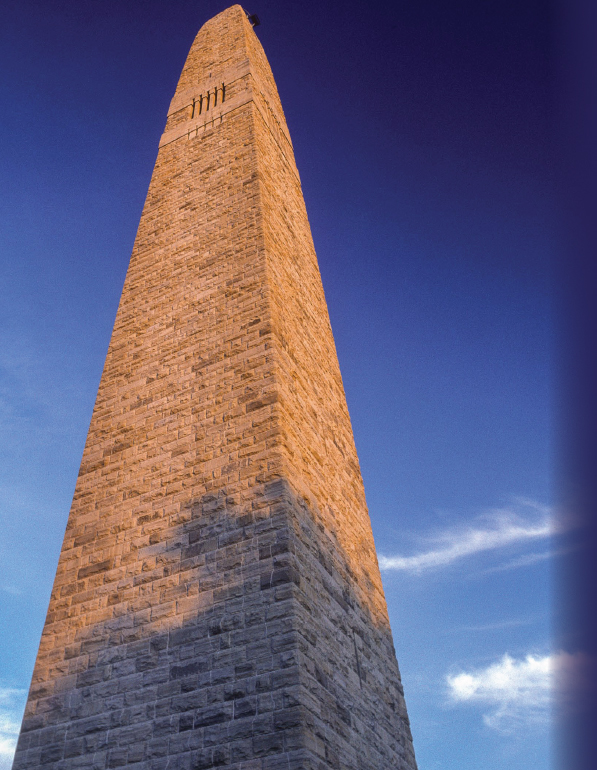 Nestled in the rolling foothills of the town with which it shares a name, the Bennington Monument dominates the unwavering mountain skyline.

It’s difficult to imagine Bennington without the 306-foot stone tower, as it’s one of the first things that greets visitors. But besides its picturesque charm, there’s some rich history memorialized within those tall gray walls.

On August 16 in the year 1777 General John Stark and his troops successfully defeated parts of the invading British army. The British had planned to cut New England off from the other colonies, but the troops were in desperate need of supplies following battles at Fort Ticonderoga (now in New York) and Hubbardton (Vermont).

With reports of supplies being held at the present day monument site, the British army headed toward Bennington. Stark and the Green Mountain Boys interrupted the British at what’s now known as the Bennington Battlefield, located five miles away from town in New York. The rest, as they say, is world changing history, and, along with the Battle of Saratoga, marks the definitive turning point in the Revolution.

A group wanting to recognize the importance of the battle decided a monument should be built where the coveted military supplies had once been cached.

To commemorate the battle, construction of the Bennington Monument began on Aug. 16, 1887 and was finished two years later, although it did not open to the public until 1891. What makes the monument even more unique is the fact it was built using Sandy Hill Dolomite, a magnesium limestone harvested from present day Hudson Falls, NY. The stone is known to contain fossils, so who knows what secrets the monument contains. Amazingly, the structure was built without any framework and is essentially stone laid on stone.

The Bennington Monument opens in late spring, allowing visitors from across the world the chance to take an elevator up 200 feet, and enjoy breathtaking views of Southern Vermont as well as parts of neighboring Massachusetts and New York.

A small informational center borders the monument’s property at the end of Monument Avenue in what’s affectionately known as “Old Bennington.”

These grounds also contain several other small monuments depicting important aspects of the Battle of Bennington. The largest of these monuments is a full-sized statue of Seth Warner, the commander of the Green Mountain Boys, which was donated in 1911 by Colonel Olin Scott.

General John Stark is also memorialized at the site (with a slightly smaller statue), along with the thousands of men from New Hampshire who fought alongside him.

While groups have worked to preserve the historic tower and its natural settings, the monument has undergone some safety precautions over the years, including the closing of the 417 iron steps to the top in the 1970s. The steps are now only open two days each year—on May 18 and July 13.

The site hosts several events each year, ranging from summer solstice celebrations to a living history encampment, and even the occasional wedding.

The Bennington Monument is open daily mid-April through the end of October from 9 a.m. to 5 p.m. A small admission fee is charged, and the sprawling lawns are open for picnicking if you’d like to share a moment of history with family or friends while enjoying the view.