“ If you play music for a living, you gotta know how to hustle,” Travis says.

At the beginning of sixth grade, Travis Dobson made a choice that changed his life: He joined the band. It wasn’t entirely voluntary.

“Every kid had to choose—chorus, band or orchestra,” he says. “I don’t sing in front of anyone, and stringed instruments seemed foreign. So I signed up for band and picked the trumpet. Then they ran out of trumpets, so I wound up playing trombone.”

More than two decades later, Dobson, 34, is still playing trombone—and making a living as a freelance music man. From his 1940s farmhouse on Lower Taylor Road in Winhall, he travels New England to play gigs with the Vermont Symphony Orchestra, the Boston Symphony Orchestra and other ensembles. He also teaches private students at his studio in Boston; plays at weddings, graduations and other events; helps out with the instrumental music programs at southern Vermont schools like Burr and Burton Academy; works as an occasional handyman; and sells hand-crafted ice cream in small batches to selected clients.

“If you play music for a living, you gotta know how to hustle,” he says.

Dobson’s career was an unlikely choice. He grew up on a family farm near Greer in upstate South Carolina; his dad raised beef cattle and worked as a part-time machinist. “There was zero music in my family,” Dobson says. Still, he stuck with marching band through high school, while also playing goalie on the practice squad for a minor-league hockey team. As senior year approached, he figured he would apply to Duke and become a doctor. Then John Sizemore, Travis’s first private music instructor, tossed out another idea.

But talent doesn’t always mean dedication. Travis had that dedication. I knew he could be whatever he wanted to be—including a professional musician.’

“He asked if I’d ever considered leaving the South,” Dobson says. “I said ‘maybe.’ And then I bought a plane ticket to Chicago.” His goal was to meet Charlie Vernon, the longtime and legendary bass trombonist with the Chicago Symphony Orchestra. Vernon knew Sizemore and was friends with Matt Anderson, a professional musician and instructor who worked with Dobson through high school.

“I really had to bug Vernon to see me,” says Dobson. “He grew up in North Carolina, so in the end, the Southern connection helped. I had never listened to classical music, but in Chicago I saw a concert—Gustav Mahler’s Third Symphony—that featured brass instruments. And I took a lesson with Vernon. He had some choice words about my playing style, but I had a good sound. I was raw, but I could play.”

“Travis was always very persistent,” says Sizemore, who started working with Dobson when Travis was in 7th grade. “I’ve been a professional musician and instructor my entire adult life, and I’ve seen a lot of kids with ability. But talent doesn’t always mean dedication. Travis had that dedication. I knew he could be whatever he wanted to be—including a professional musician.” Matt Anderson echoes that sentiment. “Travis went at music pretty heavy,” he says. “He’s sure of himself; I’ll say that. His attitude is, ‘If I work at it, and work at it correctly, I will achieve something.”

For “therapy,” as he calls it, Dobson is a hard-core outdoor athlete. He’s a skilled backcountry skier who tests his own limits on steeps, glades and cliffs.

At Vernon’s suggestion, Dobson started attending auditions at colleges and conservatories. His father was skeptical and his mother was “heartbroken,” he says. “She thought I was running away from home.” Then he was offered a full ride at a leading program, the College Conservatory of Music at the University of Cincinnati, and his parents got on board. After transferring a few times, in 2004 he graduated from the Ohio State with a bachelor’s in music—and enough pre-med coursework to apply to medical school, just in case. He went on to earn his master’s in music from the University of Maryland in 2006, while playing summers with orchestras in Las Vegas and in Austria. That’s when he reached another crossroads.

“I was done with school and had no place to go,” he says. “I had no idea where I was going to live or what was going to happen. Then a friend heard about this job in south Florida.” Dobson was offered an artist-in-residence position at the Dreyfoos School of the Arts, a well-known magnet high school in Palm Beach. He also started playing with the Florida Grand Opera, the Miami Symphony Orchestra, the Palm Beach Opera and the Boca Raton Symphonia. Though he’s taken a few temporary detours since then, he’s never really looked back.

” If you want to be a musician, don’t take a job outside of music. Because you might start to make good money. And then you might wake up one day and realize, ‘Man, music is really hard.’

In 2011, after relocating to Boston, Dobson and his then-girlfriend decided to spend a summer in Vermont. They rented a place at the West Townshend home of Taffy Morgan, a longtime Stratton ski instructor. To make a little money, they concocted their handmade Starry Sky ice cream and started selling it at farmer’s markets. They stayed through the winter, and Dobson taught skiing at Stratton. Though the romantic relationship didn’t last, he loved Vermont and moved to Winhall in October 2012.

“It was useless to stay in Boston,” he says. “I could never make enough money to buy a house there, plus the street lights, the sirens, the noise… So I kept my teaching studio and all of my freelance music gigs in the city, and now I drive back and forth. I’d rather drive three hours from Vermont than commute every day in bumper-to-bumper traffic.” 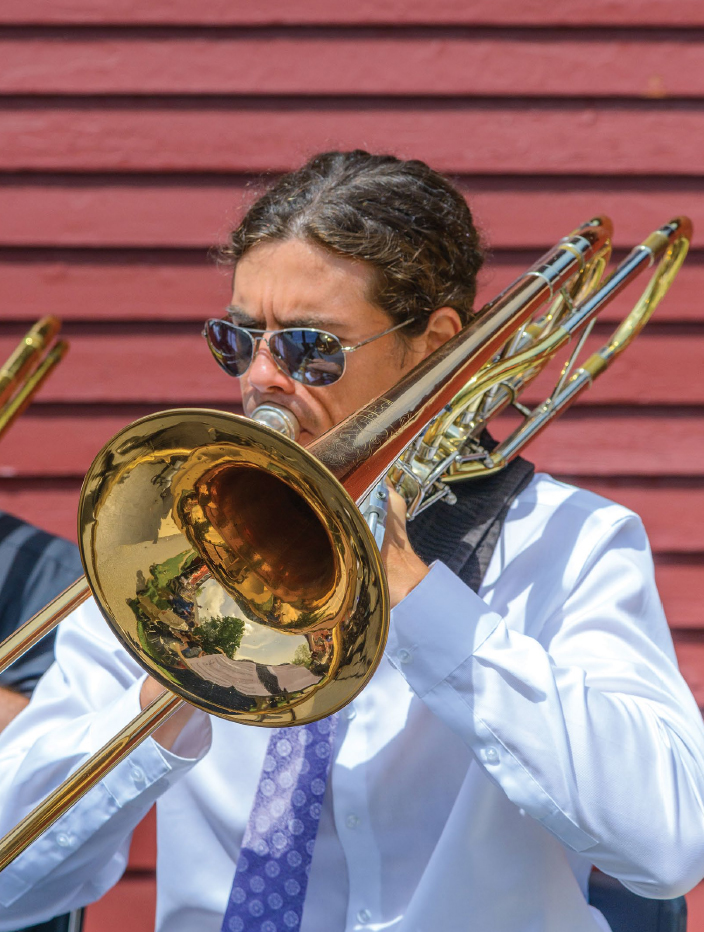 Though there’s no typical week for a freelance classical musician, during the school year Dobson teaches private students in Boston on the weekends, returning to help out at Burr and Burton and Manchester Elementary Middle School during the week. In summer, he works with the Boston Symphony Orchestra and Vermont Symphony Orchestra, while also teaching and running the stage crew for the high-school division of the Boston University Tanglewood Institute. He also takes any other jobs that come along. “You get a phone call and you go,” he says.

For “therapy,” as he calls it, Dobson is a hard-core outdoor athlete. He’s a skilled backcountry skier who tests his own limits on steeps, glades and cliffs. “I don’t mind being in situations where, if you don’t have a singular focus, something bad could happen,” he says. “When I choose to push it on the mountain—or on my motorcycle—it’s not for adrenaline. It’s for touching those spaces of quiet and calm, being fully present. When you jump off a 20-foot cliff, you’re not thinking. You’re just being. In turn, this focus improves my music, my playing.” In summer, he’s a trail runner, which he compares to “active meditation.” He also practices yoga, splits his own wood and grows vegetables in six raised beds he’s built outside his farmhouse.

At various times in his life, Dobson has dabbled in other professions. Though he had enough coursework to start medical school, he was turned off by what he sees as the Western approach of “pushing drugs and taking pills to fix any damage.” He’s done some time in telemarketing and spent two years as a loan officer. “I was a good salesman,” he says. “I socked away enough savings to buy my house in Vermont. But what I learned from that job was: If you want to be a musician, don’t take a job outside of music. Because you might start to make good money. And then you might wake up one day and realize, ‘Man, music is really hard.’”

For now, Dobson is content with the hard road. “I can eat and keep a roof over my head,” he says. “A life in music has inherent challenges, including instability and limited compensation. But this path has given me freedom that goes far beyond career or tangible rewards.” ◊

Kathleen James is a free lance writer from Manchester.