With Stratton about to open for the season, are you dreaming of big powder days? A secure snowboard stance, or a win at The Vermont Open?

The resort’s annual snowboarding event, The Vermont Open, with seven years already under its belt, continues to flourish, as it garners fans—both new and old. The no-age-limit event is like no other; carrying a unique reputation of high-quality, yet friendly competition for everyone on the snow. No wonder it’s ranked number two by Vermont Sports Magazine as a “Best of Vermont, Best Ski Area Event,” but the event extends beyond even that accolade. The Vermont Open is a gem because it is a tangible reminder that snowboarding and Stratton have been synonymous since the sport’s early days.

In the 1980s, Stratton created one of the first machine-built half pipes. “If we build it, they will come,” was the mantra of the time. And people did come—thus forming a tight-knit, passionate community of snowboarders with a history of greatness. These days, grooming methods have progressed. The equipment has improved, and features like half pipes continue to change—all for the better. But Stratton’s heart will forever remain firmly placed within its snowboarding community.

It is with that same endeavoring spirit that Stratton launches into the 2019/2020 season. 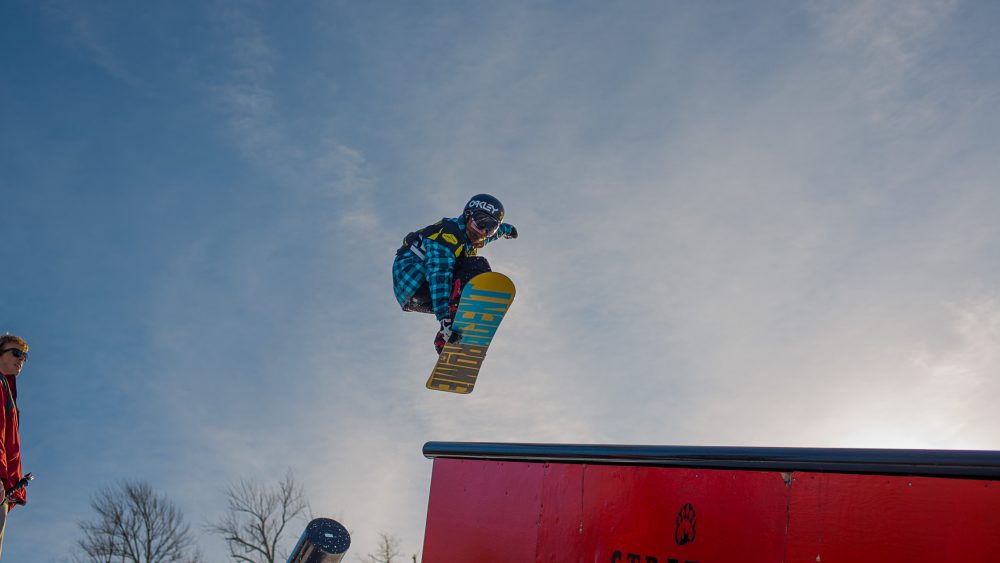 “The biggest thing that we’ve got going on this season,” says Zach Cole, terrain park supervisor at Stratton, “is that we are changing our terrain park trails. We’re moving away from the main base with our large and medium parks. So instead of being on Suntanner for the season, we’ll be on Big Ben.”

Suntanner has been a park since the 1980s; its strong presence on the mountain is a testament to Stratton’s cardinal roots in snowboarding. “There will still be a park on Suntanner this year. It will be built for The Vermont Open and then remain open until the end of the season,” says Cole.

The move to Big Ben allows for the mountain to be creative with its ample resources. “Big Ben is really wide with snowmaking down the center of it. We’re going to do both our medium and large parks on one trail. One trail—two separate parks.” Cole says. This thoughtful addition adds yet another layer to Stratton’s solid park progression throughout the resort.

Further park housework includes Tyrolienne staying a small park: with a brand-new Burton Riglet Park at its base. “The Riglet Park is going to be for kids 12 and under. It will offer a controlled environment full of exciting terrain-based features for the youngest snowboarders to receive lessons,” says Cole.

Beginning with the Burton Riglet Park, novice riders will experience success with snowboarding. As their abilities build, they will be able to smoothly move up to the Tyrolienne small park. “From Tyrolienne, you’d then go up to Big Ben on the medium side.” says Cole. “We’re blending progression so that our last feature in Tyrolienne will be a little bit smaller than our first feature on the medium side of Big Ben. From there, skiers and boarders can then move on to the large park side of Big Ben.” 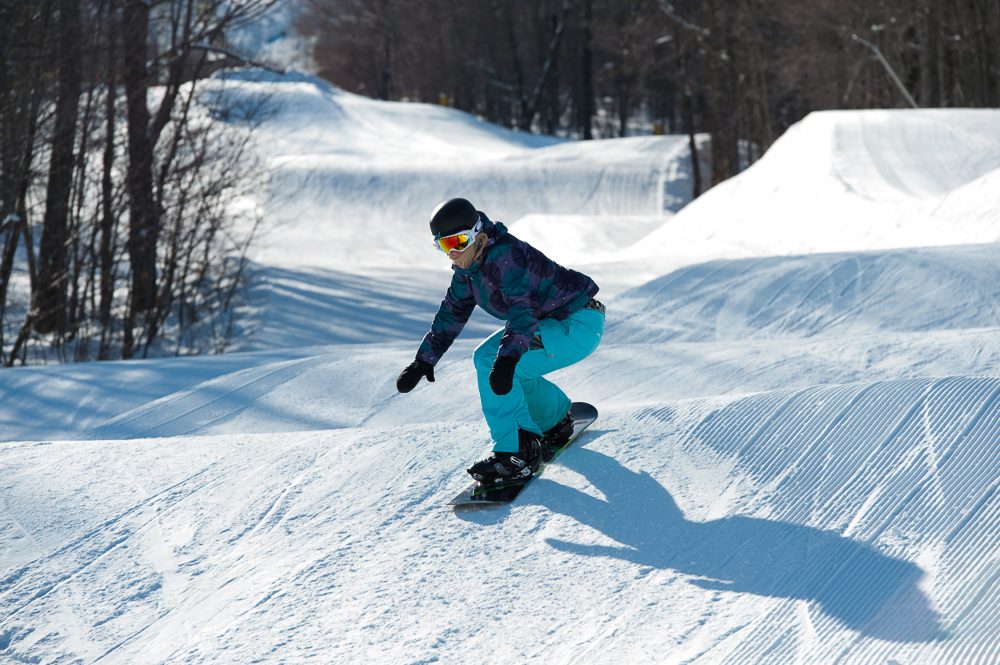 The features typically found on Old Smoothie will also be migrating to Big Ben, while East Byrnes Side will be utilized for boarder and ski cross training for competition teams and events.

Zach Cole was Stratton’s terrain park supervisor more than a decade ago before life led him in another direction. But his passion for park design remained and in January 2019, he returned to Stratton. He says, “Big Ben was something I’ve always wanted to do. It’s an ideal spot. Tons of snowmaking, a lot of acreage, moderate pitch … everything adds up to make it a fun park to ride.”

The new park will encourage creativity through its flow design. The original model of terrain parks, industry wide, is very straightforward: hit a jump based on size progression of learning that jump. The intent with Big Ben is to have a park where a pro can ride it and love it, but so too can a young child hit it at his or her ability level and love it just the same. “We’re making a park that everyone will want to ride,” Cole says. “In creating a flow park, it won’t be limited by your ability; everything is accessible. There are lots of features for young, as well as seasoned riders.” 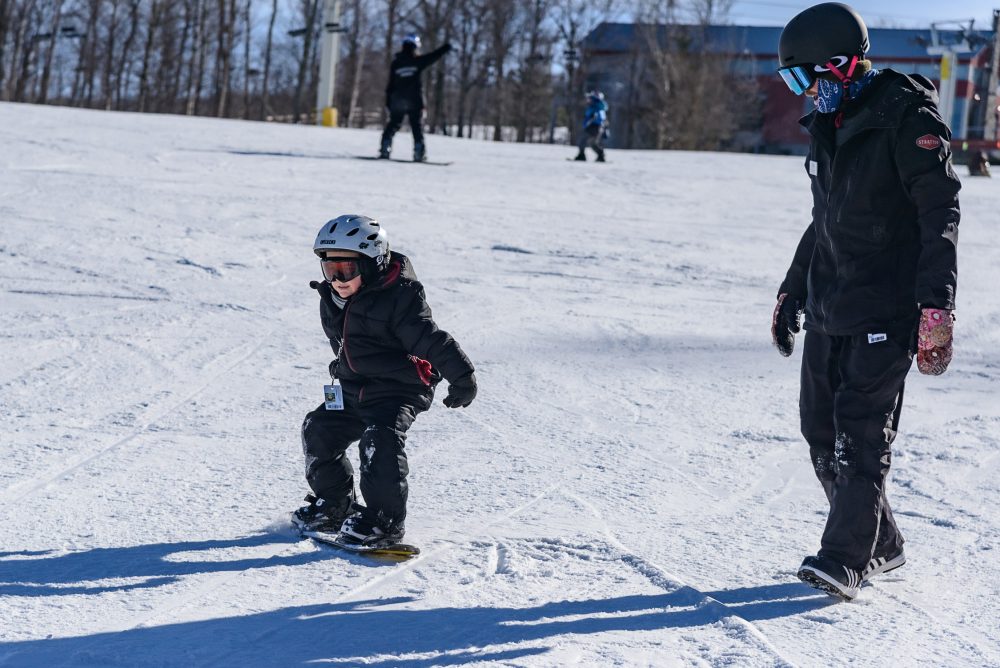 This layout bodes well for families or friends who want to go through the park together but have varying skill levels. “A flow park is not necessarily just jumps and rails,” says Cole. “It’s banks, rollers … transitions that you can hit 10 different ways.” He says that you don’t necessarily have to be a skier or a snowboarder who wants to hit a big jump—you might want to try some cool bank turn. Big Ben will be a place where you can be creative on your skis or snowboard and find a new or different way to do something. It will be a spot where every boarder and skier will have optimal opportunities to flow, independently practice tricks, watch a pro set some down, or cruise along the center lane, bypassing features, but still able to watch others try them out. “Because of its accessibility, it’s going to be that much more inviting to ride,” Cole says. 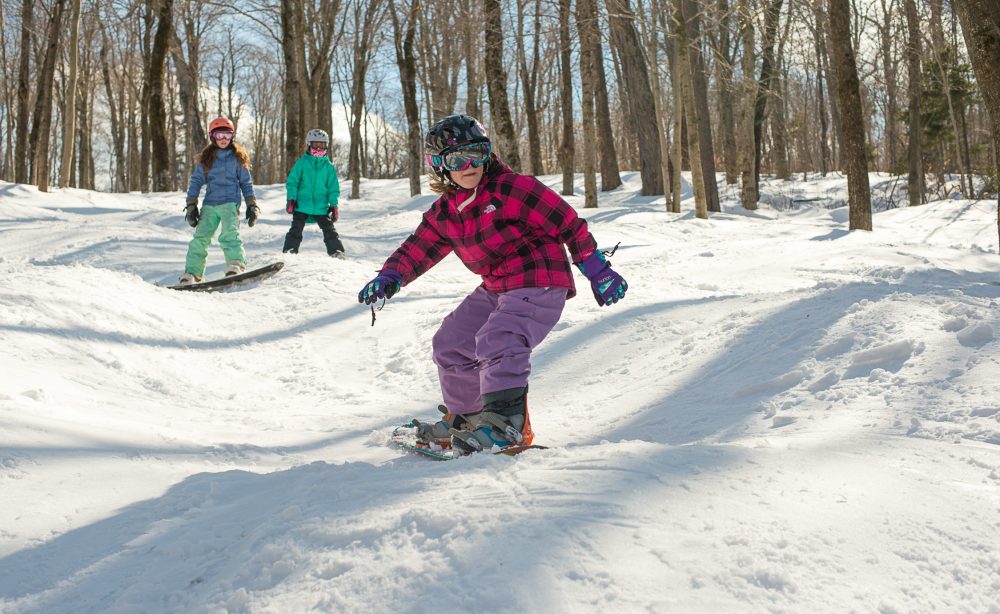 Talks of social media announced barbecues and an eventual banked slalom entrance to the park have been kicked around. “It should be a pretty cool vibe there,” says Cole. “The tube park will be over there too. Big Ben will be a spot where you can unwind and feel it’s a comfortable, safe place to explore. It will be the part of the mountain where you can go and say, ‘Great, I can relax here.’”

The new Burton Riglet Park also amplifies the resort’s belief in terrain-based learning. Located at the base of Tyrolienne and accessed through the carpet, “it will be offered through classes,” says Cole. “I think everyone can agree, it is best to begin learning as a child.” The program teaches the fundamentals of snowboarding in a mellow, inviting environment and is revolutionary in its approach. Instruction is hands-on with features designed to help children learn by doing, so that no matter if a child is a born shredder or someone who has never slid on snow—each will have a fantastic learning experience in the vibrant, cheerful environment of the Burton Riglet Park. 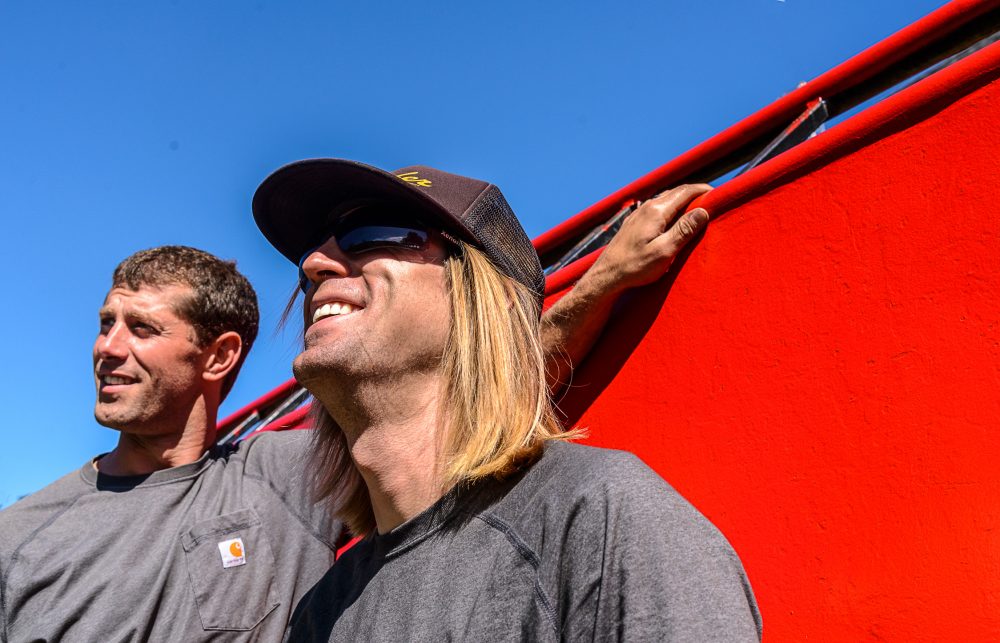 The features in the Riglet Park will be removable, but when in place, will include “low boxes basically on the snow,” says Cole, along with small turns and rollers to give children the experience of going over features and being able to learn how to control themselves through turns. Most important, the park will only be open to participants in the program, making for a controlled, safe space in which to learn. “It will take the scary stuff out of learning how to ride,” says Cole. With its birds-eye location in front of the base lodge, parents will be able to view their child’s progression—and their smiles—too.

“We are building excitement for everybody: our employees, our guests,” says Cole. “From the Burton Riglet Park to Tyrolienne, to Big Ben. And with Suntanner and East Byrnes Side too.” It’s easy to feel that excitement when dreaming of snowy days to come, but excitement isn’t the only thing to be built. There’s the staggering, literal work of building a park such as Big Ben.

“It’s a big process to build a terrain park,” says Cole. “Especially on Big Ben, where we are looking to have 50 features on the trail. That’s a lot of work.” He says that building a terrain park begins in the warmest of seasons. “We draw the layout for a park in summer. By creating a reference on paper, we have a good idea of where each jump or rail box feature is going to be located once we start moving snow around.” Summer is spent going through the metal features and rail boxes, fixing any damages and repainting wood, all while considering where they might best fit in the overall park design. “In the warmer weather, we get our inventory done so that when winter comes, we’re ready to put steel in the ground and be good to go,” Cole says. Specific to Big Ben, the terrain park crew plans to change up features throughout the riding season. “If you were to come in and look at the park on a Sunday, it might be a little different in layout than it was on Friday,” Cole says. Changeups are exciting news for guests, but for the crew, planning ahead for some of these additional features is vital because once winter hits, it means that long—albeit rewarding—work hours are needed to keep the terrain parks running optimally. Cole is effusive in praising his crew.

“Their job—which we don’t see and guests don’t see—is the most important job there is,” says Cole. “They go out at night. They work long hours. Our lodge is at mid-mountain, and it’s tough to move all the features to the Sun Bowl, maneuvering in a snowcat.” Snowcats, for creations like Big Ben, are relied on heavily to move snow. Lots of it.

“Some of the jumps we build are the size of a house and it can take a full day to build that one feature,” says Cole. “A large park takes one to two weeks to complete the bulk (snow) move. After that, we have shapers who come in, do the handwork, and set the rails. We rake and shovel each take-off to every rail and every jump.” He adds, “We’ve got a really good team of groomers that rebuild the jumps and put the mountain together every night in ways that you can’t imagine.” 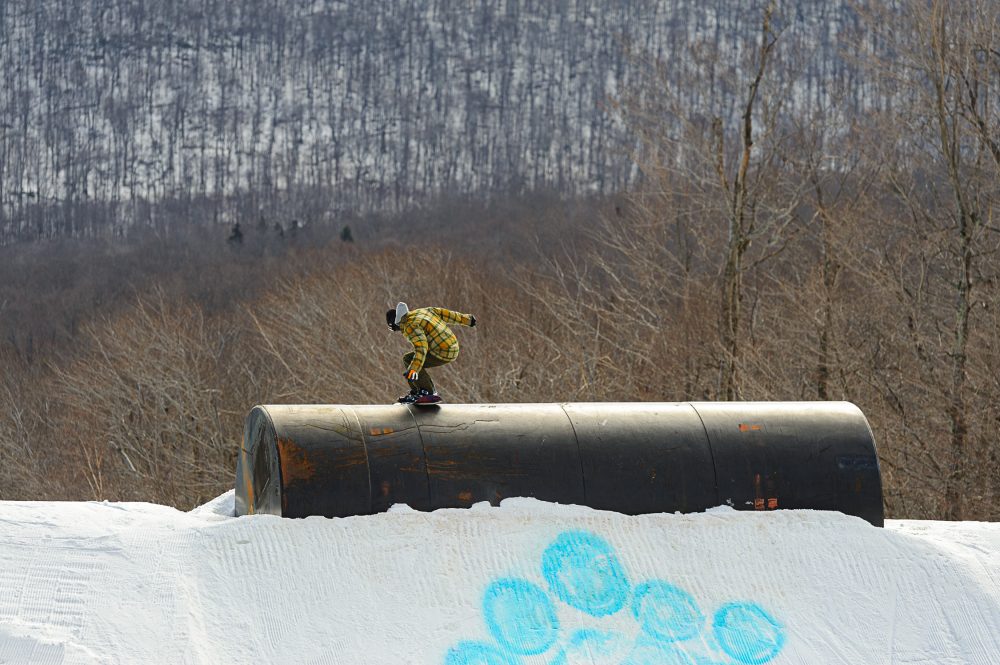 All day long the parks are being enjoyed, which means that once evening hits, those trails need to be reworked. “The snow has been pushed out by skiers and riders,” Cole says, “so our groomers bring the snow back up the hill and onto the trail. They push up all the landings and rebuild the jumps every single night to keep the parks fresh.” In the wee hours of the morning, the hand crew comes in with their rakes and tools to shape everything again into a final professional polish. The resort opens, and the cycle begins again, a necessary, welcomed rhythm to winter in the parks.

In his book All Along the Clocktower, Brian L. Knight writes of Stratton’s early success in expanding the sport of snowboarding, “growing in popularity from Olympic gold medalists to backhoe operators and converted skiers, locals contributed immensely to the development of the sport.” In every evolution since that first machine-built half pipe, the mountain has strived to remain true to its boarders and skiers who claim Stratton as their fondest “home.” This latest chapter, of Big Ben and Burton Riglet Park developments, guarantees a blockbuster future while paying homage to the resort’s storied past.