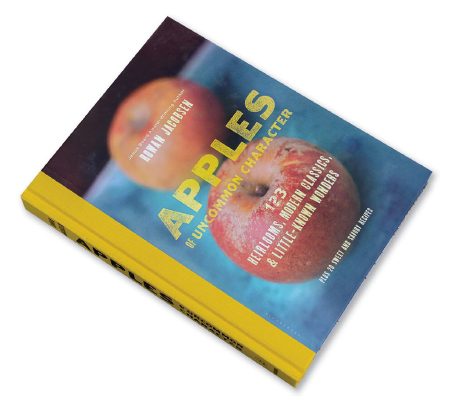 If you wanted to eat an apple when I apple trees in Calais, Vermont. A numstan and Kyrgystan from the deserts of was growing up, your choices were ber of the apples that he describes are western China,” where they appeared a thick-skinned McIntosh, a bland either very rare or not readily available 10,000 years ago, Jacobsen notes. The Red Delicious, or an equally bland in the Northeast, but most can be found first truly American apple is considered although slightly juicier Golden Delicious. I checked out a local supermarket recently and counted a dozen varieties on display, many with complex flavors that were unknown when I was a kid. Of course, we’re lucky in Southern Vermont to live near apple orchards where the choices are even greater. If you are an apple lover—and who among us isn’t?—you’ll enjoy Rowan Jacobsen’s delightful book, Apples of Uncommon Character: 123 Heirlooms, Modern Classics, & Little-Known Wonders, a very personal and enthusiastic journey through apple pomology (the study of fruit), witty, well-researched and beautifully illustrated, with 20 appealing recipes. Jacobsen lives with his family and some here, although some only from apple growers. However, if you are looking for root stock to plant, apples for cidermaking, or fruit to eat, searching them out may be worth the trip.

“Apples do not come true from seed,” Jacobsen explains. If you plant an apple seed, the fruit that the tree produces will be a wild card, with half the genes of one “parent” and half from the other. Occasionally this will produce a new and remarkable apple, but the only way to grow more of them is to graft a shoot of that tree to another tree, producing a clone of the desirable apple. “The cradle of all domestic apples is the Tian Shan, or Celestial Mountains—jagged, twentythousand-foot peaks that divide Kazakhthe Roxbury Russet, first grown in Roxbury, Massachusetts, in the early 1600s and still available.

Jacobsen divides his apple “portraits” into six sections: Summer Apples, Dessert Apples, Bakers and Saucers, Keepers, Cider Fruit and Oddballs. He describes each apple with the place and date of its origin, flavor, appearance, texture, season, use and region. He is quick to explain that the categories are arbitrary and overlap; for instance, many dessert apples can also be stored successfully; you can make good pies with some of the summer apples. His descriptions of the flavors of the apples are priceless, like those of a wine connoisseur. He likes the ancient Roxbury Russet, which is in his Keeper category, describing it as: “an ugly apple” with green skin turning “the color of oiled oak in the sun.” Yet its flavor is “yummy and strange”—acidic early in the season that “gives way to a delicious, rich, persimmon with nutty undertones.” He says the Empire “tastes like rosehip tea with honey” and calls one of my favorites, the Macoun, “the best thing to ever spring from a McIntosh seed—very sweet, very tart with an addictive yet uncomplicated lemon zing that makes your mouth tingle. Best eaten fresh.” He’s not too keen on the McIntosh (he describes the flavor as “savory and tart, with the slightest edge of curry lingering on your lips…skin like a rhinoceros”), nor does he like the more modern Honeycrisp, which he says is “sweet and dilute…there is no acid flourish, no exotic aromas, just glorified sugar water.” In fact, he’s critical of Americans for preferring very sweet apples with little complexity. Of the ubiquitous Fuji: “A colossal opening salvo of lychee gives way to tantalizing touches of mango, cantaloupe and gourmet jelly bean (choose any flavor you want; they all taste the same.)” Of the Jonathan (1790s): “intensely appley…seems to concentrate traditional apple goodness;” of the Jonagold, its more recent offspring (1968): “strong sweet and sour juices dance together over your palate in perfect step. Not a particularly complex flavor, but a very satisfying one.”

The first truly American apple is considered the Roxbury Russet, first grown in Roxbury, Massachusetts, in the early 1600s and still available.

We can still find some of the very old European apples. The Gravenstein was developed in Denmark in the early 1600s, the Summer Rambo in France a century earlier, and Lady Apples from Brittany, France, in the 1500s. He describes them as “The world’s cutest apple; two bites and you’re done…one of the most delicious apples…bright, nutty and fruity…by Christmas sweet as pear drops.” They are available throughout the US and I’ve seen them in local markets and at fruit stands.

The early settlers in the US and Canada found so much more room here than in Europe that they started growing apples wherever possible. We still eat a great number of them, created in the mid to late 1700s and 1800s, although many are only available now at home orchards and farm stands. They include Baldwin, Wealthy, Pound Sweet, Twenty Ounce Pippin, and Rhode Island Greening, first grown in Newport RI in the 1640s or earlier. Jacobsen calls it “sweet and very tart—the New England pie apple.” I agree. I once found some at an orchard and made the best apple pie of my baking career. And, of course, there was John Chapman, known as Johnny Appleseed, who started seedling nurseries throughout the Midwest in the early 19th century. Many of the recent apple varieties have been developed in Washington, the University of Minnesota and especially at Cornell University and the USDA’s Plant Genetic Resources Unit in Geneva, New York. We also eat several varieties from New Zealand (Braeburn, Gala), Australia (Pink Lady, Granny Smith), and Japan (Fuji, Mutsu, also known as Crispen).

“After years of false starts, cider is taking America by storm,’” Jacobsen says, “with new cideries popping up everywhere.” Most of the cider apples in the book originated in England, where hard cider has been a popular drink for centuries. And speaking of England, in Jacobsen’s Oddball category, most of which are of strange size, shape, or color, is the Flower of Kent apple, which originated in Kent, England in 1629. It was the apple that Isaac Newton saw fall off of the tree as he was sitting in his garden in the summer of 1666. Jacobsen says it has a sour flavor, a mushy texture, and is extremely rare, but you can see a specimen in the USDA collection in Geneva.

I tested several of the recipes (why not? I’m reviewing a book about apples!). The easiest, and one of the most delicious, was Slow-Roasted Baby Apples. I coated tiny Lady Apples with oil, sugar, and cinnamon and roasted them in a slow oven for about an hour; they were delicious as a dessert or snack. Several popular recipes are greatly enhanced by the zing of apples: chicken liver pate, Waldorf salad (with lobster), chicken curry, a salsa for Mexican pork carnitas, sausage pot pie, and lime tart. I particularly liked braised fennel and cabbage and braised Brussels spouts with bacon, both of which included chopped apples, and risotto with mushrooms and apples as a base for a sautéed duck breast. And there are several excellent recipes for apple desserts. Each recipe includes suggested apple varieties—sweet, tart, hard, soft—but I found that I could find adequate substitutes; I even decided that I would make a few of the dishes again with a different type of apple—it’s all according to your taste.

This entertaining book is not only for apple eaters. If you are planning to grow your own trees or make cider, it will give you a lot of ideas as to varieties and availability. Rowan Jacobsen’s books include A Geography of Oysters, for which he won the James Beard Award; Fruitless Fall; American Terroir; and several others. His articles have appeared in the New York Times, Harper’s, Mother Jones, and Best American Science and Nature Writing and Best Food Writing. He was a 2012 Alicia Patterson Foundation Fellow and his Outside Magazine article, “Heart of Dark Chocolate,” won the Lowell Thomas Award from the Society of American Travel Writers for best adventure story.