“What job would you do if you could do anything?” is the daydream that working folks talk about after a long day at the office or the shop. For Christopher Mayne and Earl McGoff that dream was to open a commercial brewery.

For 23 years, the two have been good friends and work buddies. They met when Mayne was working for NAPA auto parts in Bennington, and McGoff worked for corporate NAPA. The two bonded over a love of good beers and good times, and about ten years ago they started making their own beer at home after hours to share with family and friends. 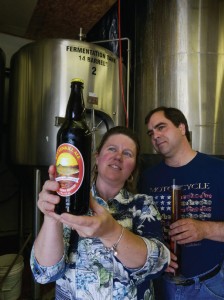 “We happened to have a lot of friends who liked drinking our beer,” said Earl of their time as home brewers. And while those homebrews were originally meant just for drinking at home, their friends and family members gave the pair the push they needed to go pro with the brewery. At first the brewery idea was just that—something fun to dream about over a couple of homebrews after dinner. But buoyed by the continued praise they received from peers, Mayne and McGoff took a chance and enter their beer in the local Southern Vermont Home Brew Festival competition, which is sponsored in part by Bennington’s long-time brewpub, Madison Brewing Company. Why not, the pair decided. It’s all in good fun and besides, it supports a good cause. Profits from the competition benefit the Bennington Museum. Much to their surprise, they won the “People’s Choice” award that year for their Pilsner, and that was the final push they needed. They decided that they were definitely on to something bigger than backyard barbecue beer.

“We looked at each other and said, ‘you know, maybe we’ve really got something here,” says McGoff. “What do you think about starting a brewery?”

Those were heady times (pun intended…). To make the commercial brewery a reality, the pair needed to scale up their small-scale brewing system of stovetop brew pots and 5-gallon fermenters to something commercial-size. They also had to establish a home base. Despite the dismal state of the economy at the time, finding used equipment turned out to be a bigger challenge than they expected. While layoffs and closures were rampant during the recession, craft beer was booming, and a lot of other people around the country were trying to open small commercial breweries as well. Since the two friends also felt they needed some expert advice from brewers who were already brewing professionally, they  traveled to the annual Craft Brewers Conference in 2009, which was held that year in Boston. They wanted to get some hard figures on what it would take to open their own brewery and also to meet some people in the industry. Hosted by the Brewers Association, the CBC is a brewing industry event that serves both brewpubs and packaging breweries.

“While we were there (in Boston) we were able to find brewery equipment, which we secured, and we also came home with a plan,” says Mayne. That plan is basically the seven-barrel brewing system that they currently use. There are 31 gallons in a barrel, so their system can brew 217 gallons of beer at a time—much more than they could do with their homebrew setup, but still pretty small by commercial brewing standards.

They moved the shiny stainless steel setup in to a small commercial space on County Street in Bennington (conveniently located next to NAPA for quick trips back and forth) and started fermenting test batches of potential recipes that they could successfully brew again and again.

Consistency can be difficult to achieve with a small brewing system, so the recipes needed to be solid before they released anything to the public. Mayne and McGoff needed to be able to brew beers that tasted exactly the same every time they were made, which sounds easy but is actually quite tricky. To brew a beer that tastes the same from batch to batch, a brewer needs to work with the exact same ingredients in the exact same amounts and under the same temperature conditions each time. Ingredients can vary, however, and the temperature in the brewery can change quite a bit depending on the season. This isn’t as much of a concern when home brewing—you win some batches, you lose some, and nobody really cares. It’s all beer, after all. But in commercial brewing it is very important to be consistent. McGoff said that one of the secrets to their success is Mayne’s attention to detail. In fact, Mayne will not let any beer that isn’t up to his standards leave the brewery. Not even to friends and family.

“What some people consider perfect isn’t quite right for him,” said McGoff, “He does a great job making sure everything is exactly right.” And perfection is a tall order as a lot can go wrong with a batch of beer no matter who is doing the brewing— for example the yeast might stop working if the temperature is too hot or too cold; or the beer could pick up a spoilage bacteria that will produce off flavors. McGoff says that Mayne would rather send an entire batch of beer down the drain than put out something that he thinks is “just okay” or flawed in some way—a much bigger loss with a seven-barrel system than a five-gallon system! 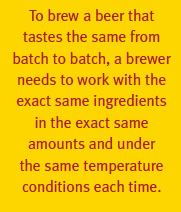 Their decision to brew their chosen styles is another secret to their success in the sea of startup breweries; while a great number of commercial breweries are focusing on making highly-hopped, high alcohol beers like IPA and double IPA, Northshire is focused on making approachable, easy drinking brews with moderate alcohol levels—styles that are known as “session beers.” Session beers are designed to allow a drinker to have two or three during a “session” at a local pub without overwhelming his senses or making him too intoxicated.

After spending some time stationed in Germany in the military as a young man, McGoff developed a love for classic European beers such as Pilsners, chocolate stouts and brown ales. Mayne shares McGoff’s appreciation for the classic styles, so they decided to stick with what they like. It’s a niche that seems to be doing well. The first year that they released their beer to the public, 2010, they sold about 250 barrels of beer, strictly in kegs. Now, three years later, they sell more than 1,000 barrels a year in both kegs and 22-ounce bottles.

Another challenge the Northshire team has encountered is trying to keep up with Bennington County’s growing thirst for local beer without growing too fast and jeopardizing what they’ve built. As one of the few breweries in Southern Vermont, they have experienced some growing pains trying to get enough beer fermented and into bottles and kegs. 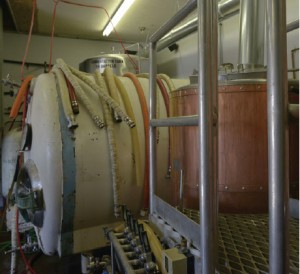 Making commercial beer is not all fun and games—it takes a perfectionist’s attention to consistency of ingredients brewed under labratory conditions.

“Keeping up with demand has been one of our biggest problems. We’ve had to increase our cellar capacity quite a bit and get newer and bigger fermenters,” says Mayne. (Cellar capacity doesn’t necessarily mean an actual cellar, by the way, it refers to the amount of space a brewery has available for storing packaged beer at cellaring temperature, which is usually around 50-55 °F). “Bottling helped us alleviate that, too, by letting us put more beer into packages and get it out to the market.”

Another secret to their success is that the two friends have decided to stay small. While Mayne works full time in the brewery, McGoff still juggles work at NAPA with part-time brewery sales. They have opted to grow and expand only within their means and when the time is right.

“We are growing as fast as we can without jeopardizing our Vermont market,” says McGoff. In addition to adding some new equipment, they also hired a part-time assistant, Andrew Grabarz, to help with the day-to-day brewery tasks like transferring beer from tank to tank, bottling and kegging finished beer and keeping the brewery clean.

“The product we are producing is taking pretty well,” said Grabarz, who homebrewed for four years before coming to Northshire. “I’ve seen our percentage grow even since I’ve been here.” 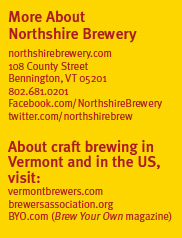 “We used dark maple syrup in it, added some extra hops and a little more in the grain bill to increase the flavor and alcohol,” Mayne said of the special-edition brew.

“Craft beer is definitely here to stay,” says Stratton’s Mayville. “People come here from New Jersey, Connecticut, New York and other places and they ask for Vermont local craft brews. I like being able to say, ‘This beer is made 40 minutes from the mountain in the space of a two-car garage,’ and they think that’s really cool. It’s something that is really unique to the area. I would love to keep supporting them and seeing them grow.”

In addition to playing around with different beer styles and possible future collaborations like the Anniversary Ale, Mayne and McGoff say that they hope to have some new additions up and running at the brewery by this fall. First is a brewing lab space that will allow them to do more testing and tasting to be sure they are serving up the highest quality, most consistent beers that they can. Second is an improved tasting room, which will give visitors a place to taste Northshire’s current beers and talk to the brewers.

If you are a beer lover and can’t make it down to the brewery, however, don’t worry, you can find Northshire beers in plenty of bars and restaurants on the mountains and throughout Bennington County, as well as beverage centers like Mueleman’s Craft Draughts in Rawsonville, Manchester Discount Beverages in Manchester, Bennington Beverage, Smoker’s Den, Martin’s Mini Mart and Powers in Bennington and Clark’s IGA in Londonderry. Also keep your eyes out for Northshire at many of the local and statewide craft brew events this fall. McGoff and Mayne estimate they’ve got a beer festival or tasting going on almost every weekend of the summer, including Mount Snow’s Brewer’s Festival the weekend of August 31 to September 1 or at Stratton’s Full Palette event that same weekend. Stop by the booth when you see the Northshire guys and try some truly local craft beer.

“It’s exciting to be part of an industry that’s seen so much growth and so much positive feedback,” said Mayne. ◊

Betsy Parks is a local free lance writer and a big fan of local craft beer.