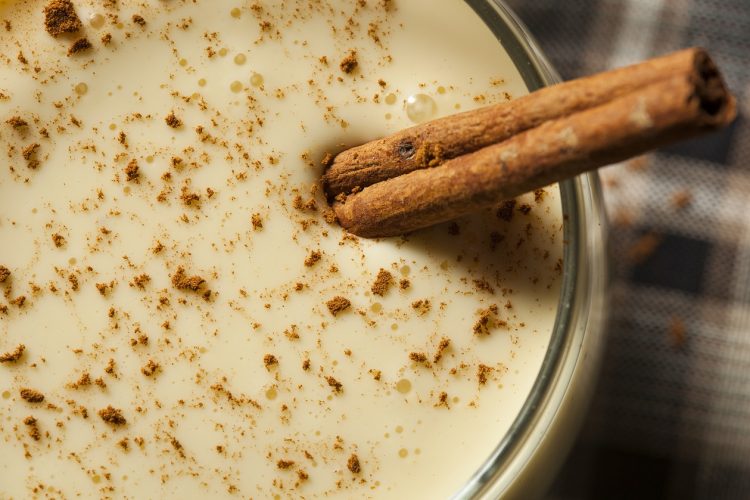 There are two kinds of people: those who love eggnog and those who loathe it. I was a loather. Having only had the kind from the supermarket, I found it gluey, overly sweet, and artificially flavored. The unscientific poll that I ran on social media showed that a majority like eggnog, but few have ever had it homemade. I decided to try making it from scratch to see if it was palatable. I read about 20 recipes, tried five, and came up with the two that follow.

I was concerned about the first recipe: classic eggnog is basically a raw egg custard – eggs, sugar, milk. Hmm. Raw eggs? I did some research, and I learned two things: the quantity of alcohol will neutralize most of the microbial beasties that might be lurking in raw eggs, and most of those offending microbes lurk on the outside of the egg. Wash your eggs with soap and water, use the freshest eggs possible, and if you’re still worried, use pasteurized eggs. Or, try the second recipe, which gently cooks those eggs. I like the first one better, but the second is good, too. Both serve about 4.

With a nod to RuralandProgressive.org, my optometrist Cinda Anderson, and The New York Times, here are my recipes.

Stir brown sugar and vanilla into egg yolks. It will look like dark mustard. Beat with an electric mixer until it thickens and looks more like light mustard. Very slowly, with the beater running, pour in the liquor until fully incorporated. Pour in half-and-half and mix until blended. Set aside.

Add a pinch of salt to the egg whites, and beat until glossy, stiff peaks form. Fold into the yolk mixture until no lumps of white remain. Ladle into glasses and top with freshly grated nutmeg and garnish with a cinnamon stick, or refrigerate, covered, for up to a week. Stir before serving.

Heat half-and-half until hot but not simmering. Beat remaining ingredients in a heavy saucepan. Slowly pour hot half-and-half into egg mixture, whisking constantly. Place this saucepan on medium heat, and, whisking, heat again to hot but not simmering, about 3 minutes. Strain into a covered container and chill completely. To serve, place 1 tablespoon liquor in each glass. Pour eggnog over, grate fresh nutmeg over the top, and garnish with a cinnamon stick.

Note: Most recipes call for heavy cream, but I switched to half-and-half. This is a rich beverage, almost like a dessert. Cream was too heavy for my taste. You can also use whole milk to make it lighter, but it will lose its silky quality if you use low fat milk. You can also use almond milk for a dairy-free version – it will be thinner but still delicious.