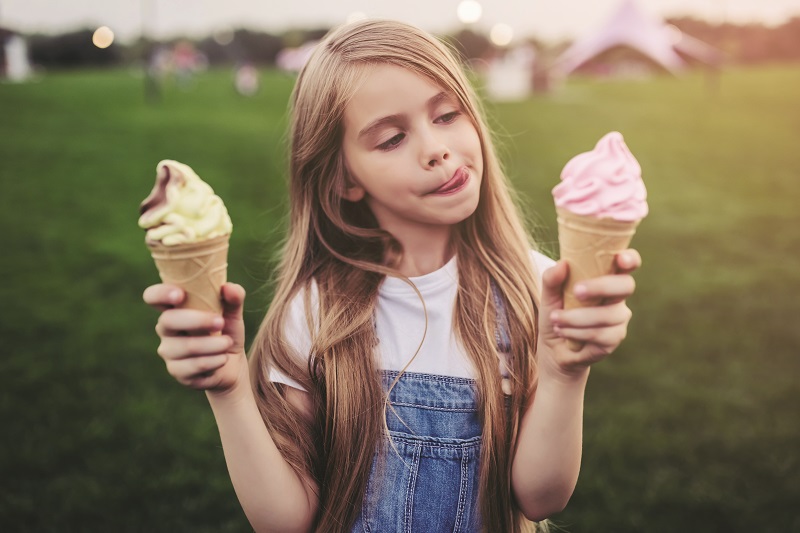 Cream, milk, and sugar . . . churned slowly in a freezing environment to create a frozen milk foam. Ice cream, helado, kulfi, creme glacee, dondurma, gelato, bingquilin, sofuto kurimu—various forms of this frozen solution of milkfat infused with assorted flavorings and sweetened with a sugar are found in a dizzying number of styles with different names throughout the world. But at its core, ice cream is a simple treat. In Vermont, ice cream is more than just a treat however; it’s a point of state pride and bespeaks to our dairy heritage.

Most food historians claim that the earliest form of ice cream was a frozen “milk drink” found in ancient Chinese culture, roughly 1,400 years ago. This refreshment was made with various animal milks mixed with flour and an evergreen flavoring. It has been claimed that Marco Polo brought the original ice cream recipe back from China to Italy at the end of the 13th century, but that story is questionable. What we do know is that in the 17th century in Naples, Italy, adding milk to frozen sugar and fruit drinks became very popular; most food historians consider this the official start of modern ice cream.

How ice cream came to the United States is a bit vague, but it is generally believed that the Quakers brought the love for the confectionary treat over from the Old World. The first true commercial producer of ice cream in this country was Quaker dairy merchant Jacob Fussell. In the 1850s, he built an ice cream production facility in Seven Valley, Pennsylvania, regarded the birthplace of the American ice cream industry. Ice cream production remained small-scale until affordable, automated refrigeration made production costs less costly for manufacturers and easier to ship and store frozen. 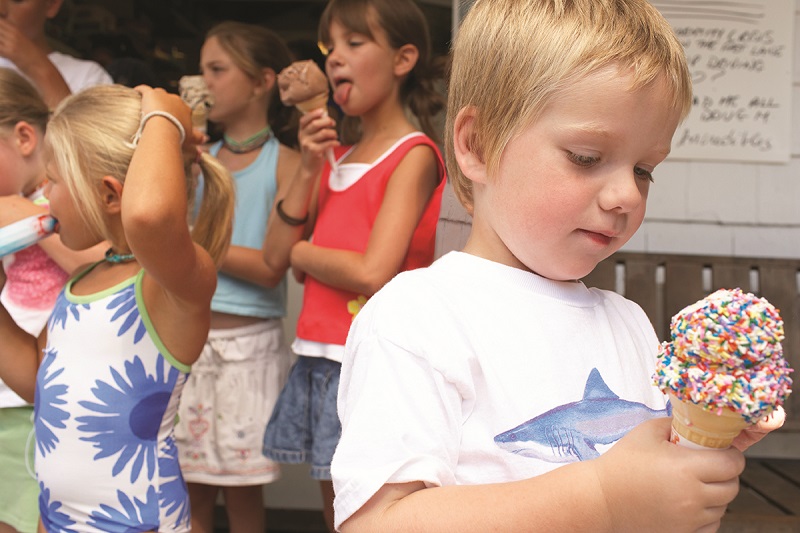 Ice cream production starts with mixing and then heating the base ingredients: milk, cream, sugar, and an emulsifier (sometimes egg yolk). The heat will both pasteurize (sanitize) and homogenize (mix) the milk and ingredients. An ice cream maker’s goal is to emulsify the fat from the cream with the proteins found in the milk, creating a stable solution of fat and milk—a process akin to getting oil and vinegar to not separate.

Once the mixture is homogenized, the chilling process begins. The chilling phase takes place when the true emulsifier replaces the emulsifiers from the milk. During this process a very important structural re-configuration happens to the fat, which allows air to more easily be “captured” into the solution in a smooth, homogeneous fashion.

Next is the freezing and churning phase, when air gets incorporated into the solution. The amount of air that is added to the mixture is known as the “overrun,” which determines how soft or hard the ice cream will be. For example, higher-grade ice creams and gelatos are churned lightly, with lower overruns, producing a dense and rich final product, while supermarket half-gallons are churned more heavily, producing lighter products with more of a whipped quality. Gelatos are often considered to be the most dense with the least amount of churning, although some high-grade ice creams such as Ben & Jerry’s can be about as dense as many gelato brands. The churning phase is also when specialty flavorings are added.

The final step in ice cream production is hardening. At this stage, ice cream is rapidly chilled to about -31 degrees F (-35 degrees C), locking in the creamy texture and the crystal formations developed through the first few phases. Home ice cream makers often have difficulty with this phase as home freezers don’t get cold enough, but keeping the ice cream in small containers at the bottom of the freezer can help. 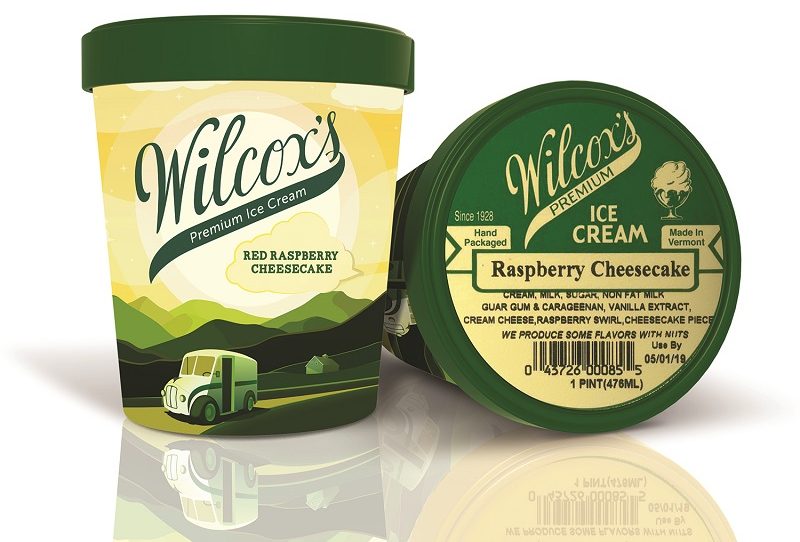 Coming soon to you in a new container

Here in Vermont, Wilcox Ice Cream is known as the first commercial ice cream producer, celebrating their 90th anniversary in the ice cream business in 2018. Local to the Southern Vermont scene, Wilcox Ice Cream is a family-owned business, with the sixth generation of family members now helping churn out their frozen delights. Located just south of Manchester, in the town of Sunderland, Wilcox Ice Cream is a staple of the region. The Wilcox Family is happy to share that they are now operating out of a new facility that has lots of room for growth.

These days St. Albans Creamery creates the bases—one plain, one chocolate—for Wilcox Ice Cream, utilizing the same recipe that Christina and Craig’s grandfather crafted. All their ice cream flavors, usually between 20 and 25, are made from those two bases. The bases are shipped to the new Wilcox production facility in Sunderland where they can churn out up to 300 gallons of ice cream per hour. Fourth generation master artisan Howard Wilcox, age 75, still flavors every gallon of product produced. They also currently produce several private label brands on top of their standard Wilcox Ice Cream brand. Craig Wilcox, fifth generation, heads up distribution of the ice cream along with hundreds of specialty food products offered by Wilcox Ice Cream and Specialty Foods.

Recently they have begun production of a 4-ounce individual serving size cup and ice cream bars are in the works. Wilcox Ice Cream is in the middle of rebranding their product line. Keep an eye out for the new packaging coming soon.

When Vermont Gelato Company owner Peter Salloy was growing up, his mom owned a restaurant that he credits for nurturing a love for crafting his own foods. Peter made a name for himself in the music industry playing alongside some of the great names including Eric Clapton and Jimi Hendrix as well as producing music for Peter Frampton. But, “Music is more a young man’s game,” he says, “so now I’m into my seventh life, gelato-making.” When an opportunity for owning part of a cafe in Newfane, Vermont presented itself, Peter and his wife jumped on the opportunity. “We started making gelato at the cafe and by the end of the first day, we had already sold through our first production run.” Gelato became an instant hit and he expanded his gelato production at the cafe. Eventually he sold his portion of the cafe, and in 2010, opened the Vermont Gelato Company, based in Brattleboro, Vermont.

The key to Peter’s success has been focusing on sourcing only top-quality ingredients, keeping his milk-to-cream ratio at 10:1, and limiting the overrun so that his gelatos are less than 10 percent air. In comparison, ice cream can commonly be 27 percent air or more. So despite his gelato containing less than half the fat of standard ice cream, the texture and taste is still intensely rich and dense. All of the gelato is made from scratch, and Fresh Ginger is their best-selling flavor. The ginger is processed on-site and their flavor lineup is constantly evolving. Keep your eyes out for a new lineof organic gelatos to hit soon. Peter is also in the process of opening a small scoop shop in Brattleboro for folks to enjoy their gelatos fresh from the production facility.

Ice cream in Vermont is nearly synonymous with the names of Ben Cohen and Jerry Greenfield, who in 1978 opened a small scoop shop in a renovated gas station in downtown Burlington. Ben Cohen lacks the ability to smell or taste, so when the pair started their business he focused on the texture of the ice cream instead of the flavors and found that adding chunky bits of fruit and treats greatly enhanced the experience. Their quirky flavor combinations, high-quality ice cream, and socially conscious corporate model won fans the world over. Currently they are listed as the fourth largest ice cream label in the world. With five scoop shops around the state, including one based Manchester, Vermont, as well as their Waterbury factory, the company is a Vermont institution.

Just across the border in Salem, New York is Battenkill Valley Creamery, which holds the award of “Highest Quality of Milk Produced in New York State” bestowed by Cornell University Department of Food Science. This award has a lot to do with the grazing/pasture time for the cattle and overall quality of life of the maidens. Thanks to their high-quality milk, Battenkill Valley’s ice creams stand up with the best. Most of their distribution is focused on the Interstate 87 corridor from Albany up through Glens Falls, so Vermonters may be best able to try their ice cream by visiting the Salem facility. During the summer months, try combining a trip to pick-your-own raspberries and blueberries at Gardenworks just down the road, and finish off with an ice cream at Battenkill Valley Creamery for a delightful summer afternoon. 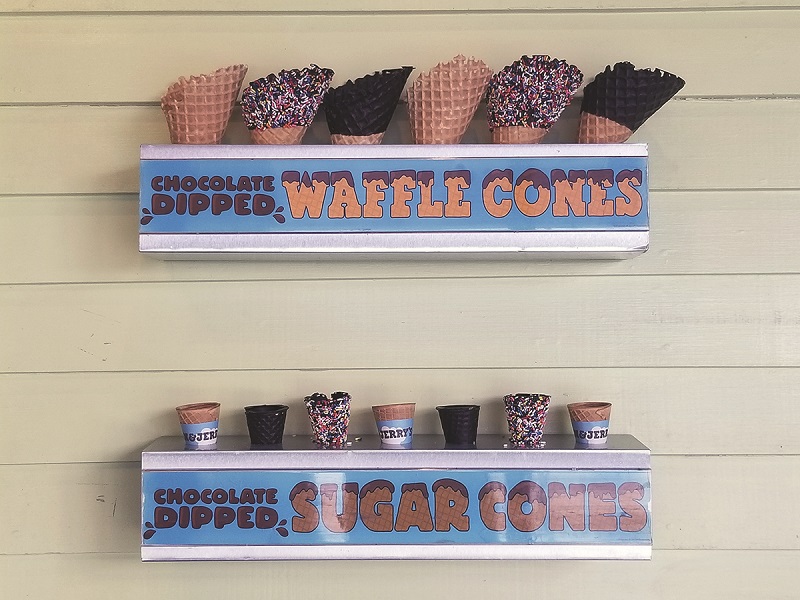 If you are looking for a way to cool down on a warm afternoon or just up for a treat to celebrate the season, there is no better fix than a visit to the local ice cream stand. Scoop shops and creemee stands can be found throughout the area. It’s simply a matter of finding your favorite flavor. With so many varieties to choose from, there is sure to be something for every taste bud.