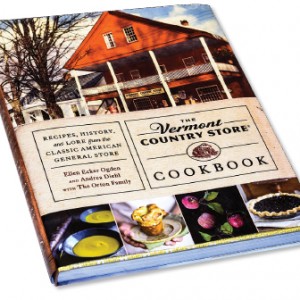 Recipes, History, and Lore from the Classic American General Store

Most of us have a warm feeling for “the good old days,” a time when we like to think that life was simpler and easier than in the hectic present. The Vermont Country Store, one of the Green Mountain State’s most honored and renowned destination places for locals and tourists alike, has relied on this feeling of happier former times, especially in rural Vermont, for 70 years. It was started by Vrest and Mildred Orton in Weston in 1945, first as a catalog, still published and still called The Voice of the Mountains—and still one of the most popular of its kind—followed quickly by an old-fashioned retail general store in Weston. The business has been enlarged and is thriving, the management handed down now to the third generation. The Vermont Country Store Cook Book: Recipes, History, and Lore from the Classic American General Store by Ellen Ecker Ogden and Andrea Diehl with the Orton Family is the story of this emporium that combines folksiness and nostalgia with sharp business practices. The recipes are for traditional Vermont foods from Mildred Orton’s files and those of her mother, grandmother and friends and relatives, many of which the editors have updated, giving 19th century treats a 21st century twist. In addition, Lyman Orton, Vrest and Mildred’s son, and his sons, Gardner, Eliot and Cabot, reminisce about growing up in Weston, working at their family store, and eating meals from Mildred Orton’s kitchen. Just about every page features old black and white photographs, donated by the Ortons that recall bygone days and Matthew Benson’s stunning full-color pictures of contemporary food, people and places.

It is a splendid combination of the history of a successful small-town Vermont business and of the foods that most Vermonters treasure. In addition, the book is a treat for the eye.

In describing the design, Andrea Diehl says, “We tried to capture the essence of the Vermont Country Store. The chapters are based on landscape.” And, indeed, rather than chapters divided by types of ingredients as in most cook books (meat, fish, vegetables, baked goods), they follow the flow of country life: The Dairy Barn, The Kitchen Garden, Small Family Farms, Streams and Fields, Wilds and Woods, The Gristmill, Potlucks and Crowd- Pleasers, The Pantry, The Cookie and Candy Jars, The Cake and Pie Safe.

Ellen Ogden says that selecting the recipes was time-consuming. “The Orton family had files of recipes going back generations, especially Mildred Orton’s Wilcox family recipes. We had to figure out who we were writing the book for. We wanted to be true to Mildred’s recipes but appeal to contemporary cooks. We wanted recipes you can’t find online, with stories behind them. We took many old recipes and modernized them, allowing us to add the dimension of time.” She says that the Orton family archives are well preserved, but most of the recipes consisted of lists of ingredients with no instructions. Lyman Orton agrees. “These handwritten recipes, scribbled on the back of canceled envelopes and sheets of defunct stationery or collected in food-stained journals, form the foundation and inspiration for the recipes in this book.” In those days learning to cook and bake was a type of on-the-job training, with mothers teaching their daughters in the kitchen, so they did not need to write anything down.

Ellen Ogden says, “My co-author [Andrea Diehl] and I spent the first three months reworking to reflect a good balance between what we thought best reflected the classics of the era and updated Vermont style.” She adds, “The best part of writing this book, actually, was hiring three local cooks to help test the recipes: Joanne (Foster) Prouty, Becky Moore and Nancy Benoit. A few are actually Foster family recipes; the Fosters were close neighbors of the Ortons and known for their cooking.” Lyman Orton says that The Vermont Country Store Cookbook is only the second published collection of his mother’s recipes. A firm believer in replacing white and processed grains and flours with whole grains, she wrote Cooking with Whole Grains in 1947, which was the first whole grain cookbook published in the U.S.

I tried many of the recipes, choosing at random, and had a lot of happy meals. Roasted Carrot and Butternut Squash Soup was wonderful; it is spiked with ginger, curry and turmeric and topped with grated lime zest to give it a contemporary zing. Dishes that combine grains and legumes are not new, but the editors bring theirs into the 21st century with present-day favorite ingredients, such as Couscous, Lentil and Arugula Salad with feta cheese, dressed with Lemon Vinaigrette; old-fashioned chicken pot pie is updated into Turkey Potpie with Buttermilk Biscuits, with a tarragon-scented sauce and the most tender biscuits I’ve ever eaten; Coffee Can Brown Bread, a New England favorite, full of golden raisins, slipped easily out of the can in which it was made. Recipes cover the gamut from Mildred’s Buttermilk Griddlecakes, a fluffy breakfast treat, to condiments (Green Tomato and Pepper Piccalilli, a traditional relish), cakes (an unusual Angel Food Crunch Cake), fruit pies (Fresh Chilled Blueberry Pie), and outstandingly crisp Oatmeal Lace Cookies. They include Mildred Orton’s Farmhouse Whole Wheat Honey Bread and a delicious Savory Herb and Cheese Bread, which is great for egg salad or grilled cheese sandwiches, or a go-along with soup or a salad. It will now be one of my freezer staples, as well as an updated version of two old favorites combined, Blueberry and Zucchini Quick Bread. Crispy Wild Rice Cakes—another grain recipe—were very tasty and unusual, as were Yankee Cod Cakes, a New England variation on Maryland’s crab cakes.

Many of the recipes have the special Vermont touch—maple, cheese, apples. The Award-Winning Venison and Apple Chili does merit an award. Vermont Glazed Quail with Cranberry Stuffing, boned small birds—quail, other game birds, or Cornish game hens—enriched with a well-seasoned corn bread and cranberry stuffing and glazed with boiled apple cider are luxurious and flavorful. I didn’t have a chance to try Roast Duck with Wild Plum Sauce or Maple-Mustard Grilled Rack of Lamb, but they sure look good. Vermont cheddar cheese pops up in many recipes: In Breakfast Popovers, the aforementioned herb and cheese bread, Irish Soda Bread with Cheddar and Herbs, and modern variations on old standards—Macaroni and Cheese with Bacon Topping, Fire- Roasted Tomato Soup with Crunchy Cheese Straws, and Vermont Cheddar and Spinach Custard. Of course, a country cookbook must include some traditional comfort foods. Here they are updated: Vermont Shepherd’s Pie, flavored with rosemary and thyme and topped with rich mashed potatoes, Orton Family Meat Loaf with prunes and bacon, and Friday Night Clam and Cod Chowder.

However, I have to caution care. Most recipes produced excellent results, but in a few cases, they didn’t, despite the many cooks involved with this project—or perhaps too many cooks. Zesty lemon curd, served with a delicious gingerbread studded with crystallized ginger, yielded 2½ cups, rather than the ½ cup listed in the recipe. The previously mentioned couscous and lentil salad is supposed to serve 4-6, but served at least 8-10. The ingredients for a very good vegetable lasagna include a can of crushed tomatoes, but the recipe refers twice only to tomato sauce; I assumed this meant the canned tomatoes. These are minor errors, but they imply a lapse in copyediting.

Vrest Orton’s descendents still know that, in our fast moving world, throwbacks to an earlier time give a sense of comfort. And old-fashioned comfort foods give the ultimate comfort.

Vrest Orton was from an old Vermont family that owned a dairy farm and a small country store in North Calais. Mildred was from the Wilcox family in Manchester and grew up on their dairy farm. Vrest worked in publishing in New York City but returned to Vermont in the 1930s and set up his own publishing business in Weston. He and Mildred met, married in 1936, and moved to Washington D.C. in 1942 where he worked at the Pentagon during World War II. During that time Vrest remembered seeing a coffee ad that featured elderly men sitting around a wood stove in a country store; it reminded him of his father’s store. He wrote, “I wanted to revive an authentic, old fashioned, rural operating store with the same merchandise: New England foods, store cheese and crackers, bolts of calico cloth…peppermint sticks, freshly cut cheese, roasting coffee, nutmegs, cinnamon sticks and so many other nostalgic things that I remembered.” The Ortons returned to Weston, published their first catalog in 1945 and sent it to 1,000 people. The simple black and white cover offers “36 Items You Can Buy Now” for the house, to eat, to wear, to read, “all fine for gifts.” The present greatly expanded colorful catalog now reaches hundreds of thousands. As Lyman Orton writes in the introduction to this book, “My dad understood that during the war,  nostalgia, a longing for the good old days, had already begun. And nostalgia would drive people to seek that simpler time, somehow.” The catalog is famous for nostalgia-laden merchandise that I didn’t think was made any more. A few years ago a friend bought a push lawn mower, the kind I hadn’t seen in 50 years. The cosmetics pages feature face creams and colognes I remember my mother using when I was a child. My daughter lives on the West Coast but is a faithful customer of the catalog’s wool, silk and cotton clothing.

Vrest and Mildred opened an actual retail store in an old building in Weston the next year and the public has beaten a path to it ever since. Success came quickly; the Ortons expanded the original store, purchased The Bryant House restaurant next door and began serving meals; they opened a second country store in Rockingham in 1967. The company also has jumped into the contemporary Vermont business culture, supporting the Vermont  Cheese Council, Slow Food Vermont and the Vermont Fresh Network.

Although the internet now offers impatient shoppers the newest of the new with the tap of a finger, the sweet, old-timey atmosphere in the Vermont Country Stores and the lush descriptions in The Voice of the Mountains catalogs still draw thousands of customers a year who love the time-honored products. In 1945, Vrest Orton realized there was a desire for “the good old days” and of a pre-war way of life, even though the U.S. was fast urbanizing and country life in those old days was usually hardscrabble and difficult. His descendents still know that, in our fast moving world, throwbacks to an earlier time give a sense of comfort. And old-fashioned comfort foods give the ultimate comfort.

-Louise Jones is a regular columnist for Stratton Magazine.