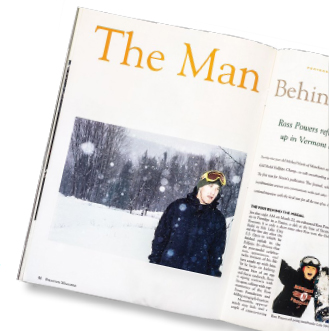 Ross Powers in The Man Behind the Medal, by Michael Nevin, Fall 2002

There is something about our little part of the world that attracts people, draws them, and stimulates them to do things that make other people (like us here at the magazine) pay attention. This is not a new development here. It has been going on for more than a century now, as we learned from Paul Robbins’ Kipling in Vermont. The great poet lived for a while in Brattleboro area where he wrote The Jungle Book.

Closer to home, in both time and space, other distinguished writers have lived and worked here in these hills. Among them, W.C. “Bill” Heinz, a Fifteen Round Writer, who was a contemporary of Red Smith and some of the other legends of American sports writing. Robert F. Jones wrote about sports—and many other things—in a later era and became both a resident of the Northshire and a contributor to this magazine. We remembered him as The Man Who Loved His Dogs. A writer of a very different sort, Fred Buechner, is famous for both his novels and his theological writings as well as for the occasional sermons he preached at some of the churches in our area.

In The Hills Are Alive, we profiled Michael Rudiakov, another sort of artist; one who made the Northshire his home and was the force, for years, behind the Manchester Music Festival which continues to thrive under the direction of his son.

When it comes to drawing interesting and celebrated people to the area, Stratton Mountain is a magnet. Some of these people come to make a contribution but do not stick around. Arnold Palmer, for instance, was here to launch his eponymous golf school on the mountain. And the most celebrated skier of his time, Jean Claude Killy, a man who became something of a superstar in the sport and beyond, was in the region to present medals to other winning skiers.

Then, there were the people drawn by the mountain and others who came and stayed and left a mark. These included Tink Smith, a visionary and earth mover who literally left his mark on the mountain. Then, there were Casey Rowley, Mitch McLaughlin and Emo Henrich, who made Stratton into a place where those who did not know how to ski came to learn and those who did would come to get better.

There are also some for whom the lure of the mountain is so strong that they choose, like the Joudrys, to live Life at the Top. Their summer house at the summit of Stratton Mountain has no electricity and no phone but, as we reported, you can’t beat the view.

This place has that sort of effect on people. And we’ve been finding them for 50 years now.