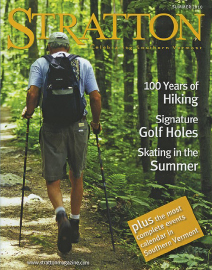 There is a lot to do in Southern Vermont and the people who make this place special do all of it … with a passion. From the beginning, Stratton Magazine has covered the many pursuits that engage us and our readers. Beginning, of course, with skiing. This comes with the name and the territory. And like the mountain, skiing has evolved over the years, as we have noted and reported regularly. In the Winter 1995-96 issue, Rick Kahl wrote about Once and Future Skiing. It is evidence of how far things have come since then, that we announced the article on the cover with a line that read: Skiing: From Bear Traps to Super Sidecuts. The world does not stand still. Nor do those who live in and love the Northshire. They are, among many other things, avid anglers. In the Summer 1992 issue, Robert F. Jones wrote in his energetic and inimitable fashion of how he was Hooked for Life by the fishing around here. The legendary Battenkill River and our many other fine streams will do that.

Our rivers also appeal to those whose passion is for less languid pursuits. As, for instance, white water canoeing and kayaking, which are done at world class level on the Wild, Wild West (River, that is).

Things don’t get pushed to quite that extreme in Lionel Atwill’s Geri- Hat-Trick Hockey in which the author sets out to prove that you can play competitive ice hockey at any age. Really. You can. Still, as he writes, “A couple of us relied on our sticks more as a rudder or crutch than as a tool for maneuvering the puck.”

There is no age limit—really no limit of any kind—on the sport of cross country skiing. You can go as far as you want, even from border to border, on Vermont’s Highway of Snow. And at the weary end of a bracing day, you can find a hot meal and a comfortable bed in one of the inns along the way.

Not all the passion here is for extreme sports. We also cultivate and grow with a commitment and passion. And we do it, on occasion, as a community, the way a few dedicated local women did when they undertook the rehabilitation of an old home once owned and occupied by a famous person. That would have been Robert Todd Lincoln and the home would be Hildene which was derelict until, as Marsha Daniel wrote in Spring 1990, those volunteers set about Restoring a Vision of the Past and brought the home and, especially, the grounds back to glory.

And, if you really want to go the genteel route and fill your leisure hours with perhaps the most leisurely sport of all, you can do Mallet and Wickets on the lawn. Tres civilized.

Many pursuits and lots of passion. Ingredients for an interesting, and active, 50 years.