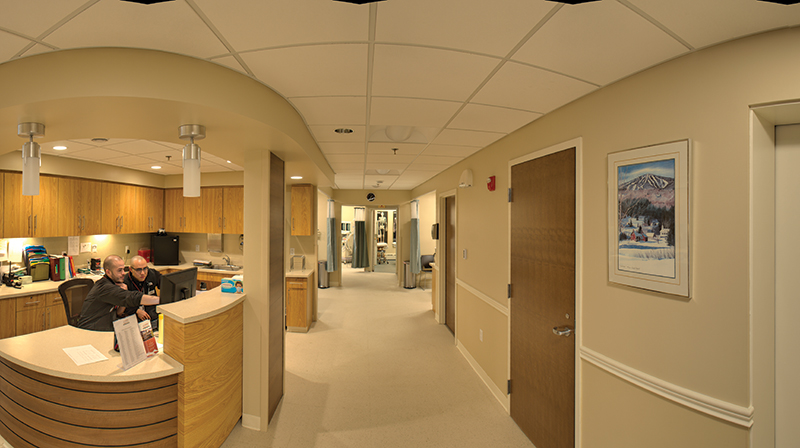 It is not often easy to find top-notch medical care in rural communities, but for Stratton and the surrounding towns, Stratton Mountain Urgent Care at the Carlos Otis Clinic is a priceless resource that’s available to everyone.

The state-of-the-art medical facility behind the gondola base is open throughout the ski season with a staff that includes veteran emergency room physicians and orthopedic surgeons from hospitals in Boston, New York, and beyond.

“It’s very much a community-oriented facility,” said Clinic Medical Director Dr. Janel Kittredge. “Anyone can walk in with any ailment and see a medical doctor or an orthopedist. No appointment is necessary and you don’t have to be skiing to be treated.”

Longtime local doc Carlos Otis started the clinic back in 1971 to provide both general and urgent care to the Stratton community during the winter months. Since then, the facility has treated thousands of local residents and resort guests for a myriad of illnesses and injuries, earning praise from scores of grateful patients.

“It’s an amazing resource,” said Assistant Stratton Ski Patrol Director Mike Anderson. “I don’t know how many ski areas have that kind of asset at the base of the mountain but the people who got that going all those years ago, they saw the future.” 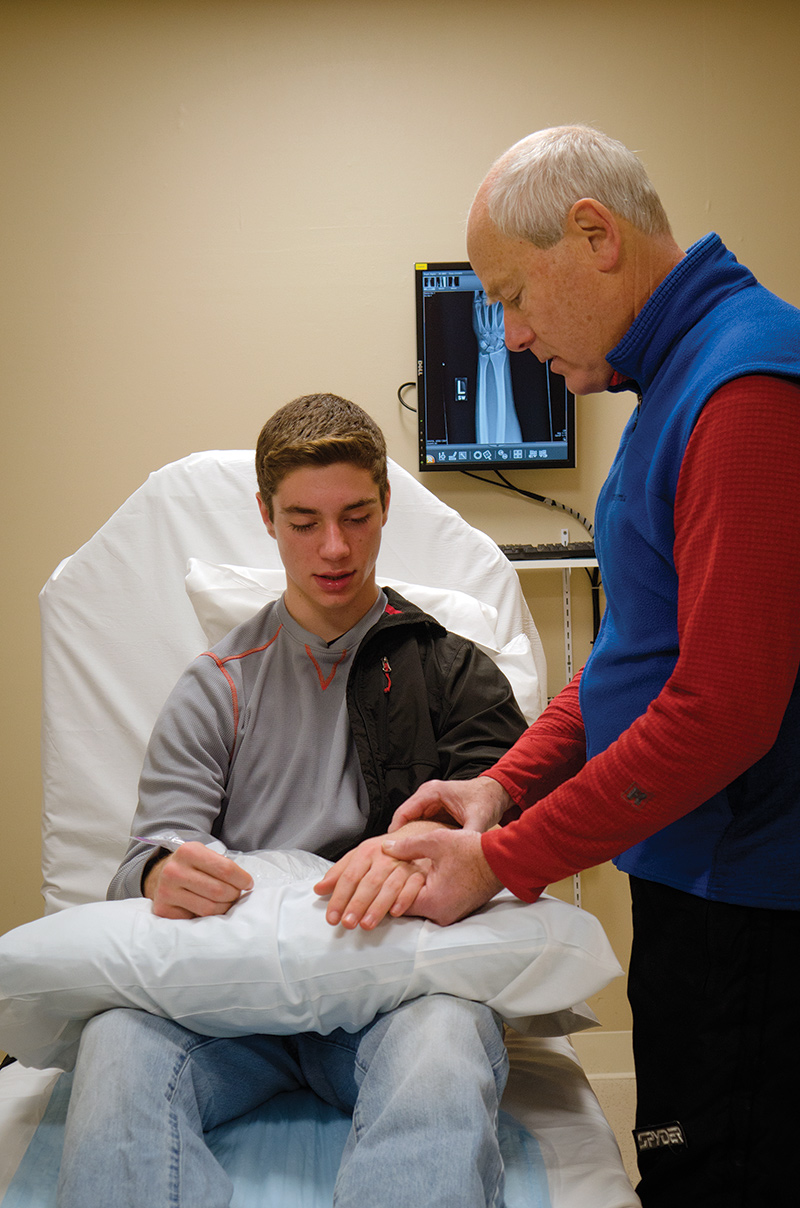 The clinic staff includes full- and part-time nurses, X-ray technicians, and administrative staff but all 43 of its doctors are volunteers. And every day during ski season there is at least one emergency room physician and one orthopedic surgeon on duty. “We offer 100-percent physician-level care,” Executive Director Seth Boyd said. “Every patient is seen by a doctor and that’s pretty uncommon.”

Most of the volunteer doctors are clinic regulars who typically sign up for weekly rotations at the resort year after year. “It’s become a family tradition for a lot of our doctors,” Boyd said.

Dr. Elizabeth Matzkin and her husband, Dr. Eric Smith, are both orthopedic surgeons in Boston. She is an associate professor at Harvard Medical School and surgical director at Brigham and Women’s Hospital where she specializes in women’s sports injuries. He is an associate professor at Boston University School of Medicine and a reconstructive orthopedic surgeon at Boston Medical Center specializing in various types of hip surgery. They volunteer at the clinic for two weeks every year when their three daughters have Christmas and February school vacations. 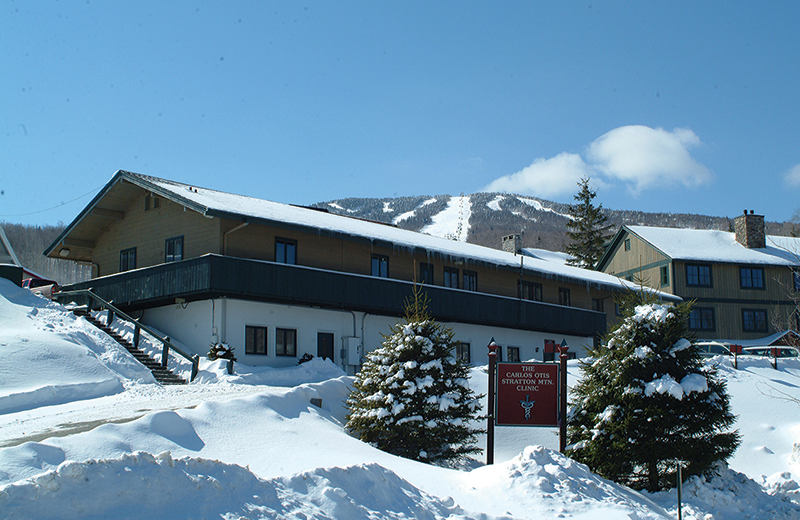 “My wife and I are busy orthopedic surgeons and the kids play a lot of hockey so we really cherish our time together at Stratton,” Smith said. “Liz and I get to do the jobs we really love; we also love getting out on the mountain, so we’re really thankful to have the opportunity to do that.”

Here, patients can walk in and see an orthopedic surgeon right away, which in a city could take weeks. And for patients suffering from coughs, colds, aches, pains, or any other ailment where they need to seek treatment, the clinic staff is ready to help.

“We have people who come here from all over the world,” Matzkin said. “And when they’re at the resort, maybe one of the kids comes down with an earache, a sore throat, or flu symptoms. The ER physicians see and take care of those patients and can give them simple medications, if they need an antibiotic or something, to get them through until they can get to a pharmacy.” 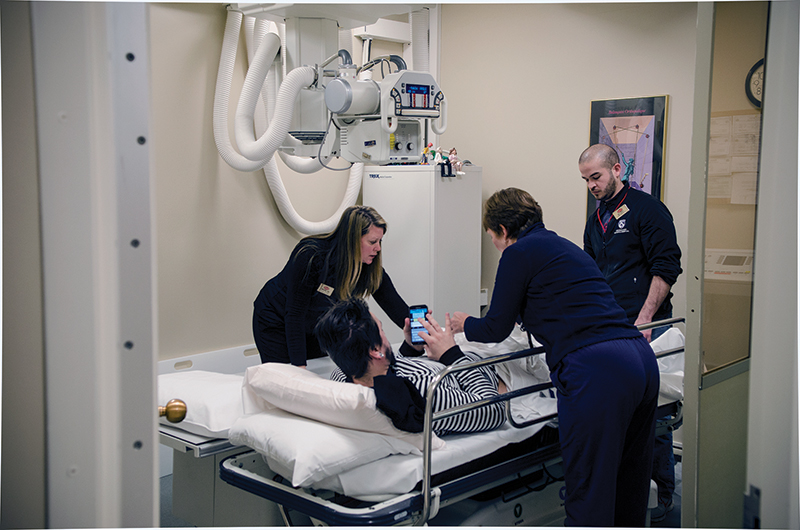 Working alongside the doctors is a staff of nurses and technicians, many of whom have been at the clinic for years. “It’s very much a team approach,” said Fran Dorsky, who recently wrapped up a three-year term as president of the clinic’s board of directors. “Each member of the team—the physician, the nurse, the X-ray tech, the business administrator—is valued equally for their skills. Each one is critical, not only to the care of the patient, but to the care of the family who is waiting for the patient as well.”

Kittredge said longtime nurse Mary Beth Hand, who was at the facility from its opening until her retirement last year, and Dr. Otis “set the foundation for the culture of care at the clinic.”

“And it’s a very high level of care that we offer,” she added. “It’s extraordinarily rare to have this kind of facility at a ski resort.”

In 2014, the clinic underwent a $1.5 million renovation, adding 4,000 square feet of new or renovated medical space as well as updated medical equipment. In 2018, a new ambulance was obtained. “We were able to expand the number and size of the treatment rooms so more patients can be seen and there’s more privacy for those patients,” Kittredge said. “We also expanded the first aid room, which is a completely free service by the way, staffed by nurses. We have a full digital X-ray, ultrasound and EKG machines, and electronic medical records, to help with continuity of care and follow-ups. And all the funds that were raised to expand the building came from private donations.” 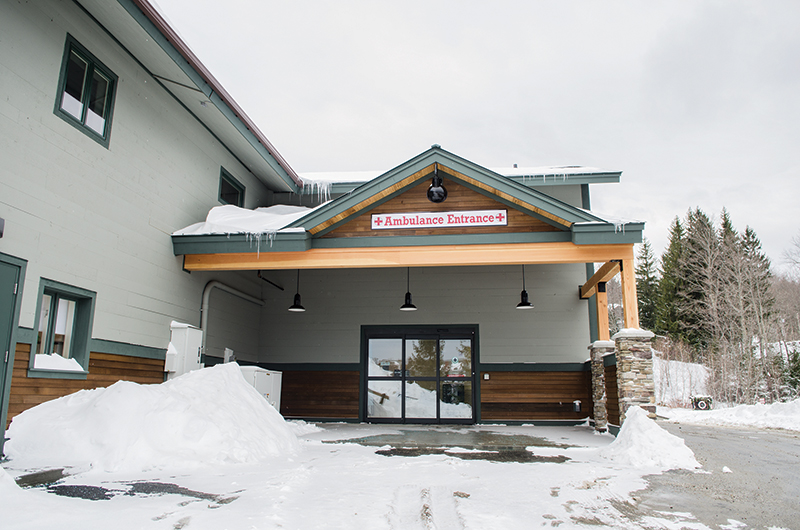 That kind of support from the Stratton community has made it possible for the facility to grow from a small orthopedic clinic at the base of the mountain to the full-service medical center of today.

“The only way a clinic like this could exist is by community involvement,” Kittredge said. “The Stratton community has faith in the clinic; they want to have a facility like this available, and without that kind of support we wouldn’t exist.

From its humble beginnings back in 1971, Stratton Urgent Care at Carlos Otis Clinic has evolved into a critical local resource, providing top medical care to skiers and snowboarders as well as Stratton guests, employees, residents, and the community at large.

“I think if Doctor Otis were alive today, he’d be so happy to see what the clinic is capable of doing on any given weekend,” ski patroller Anderson said. “He’d be very proud. 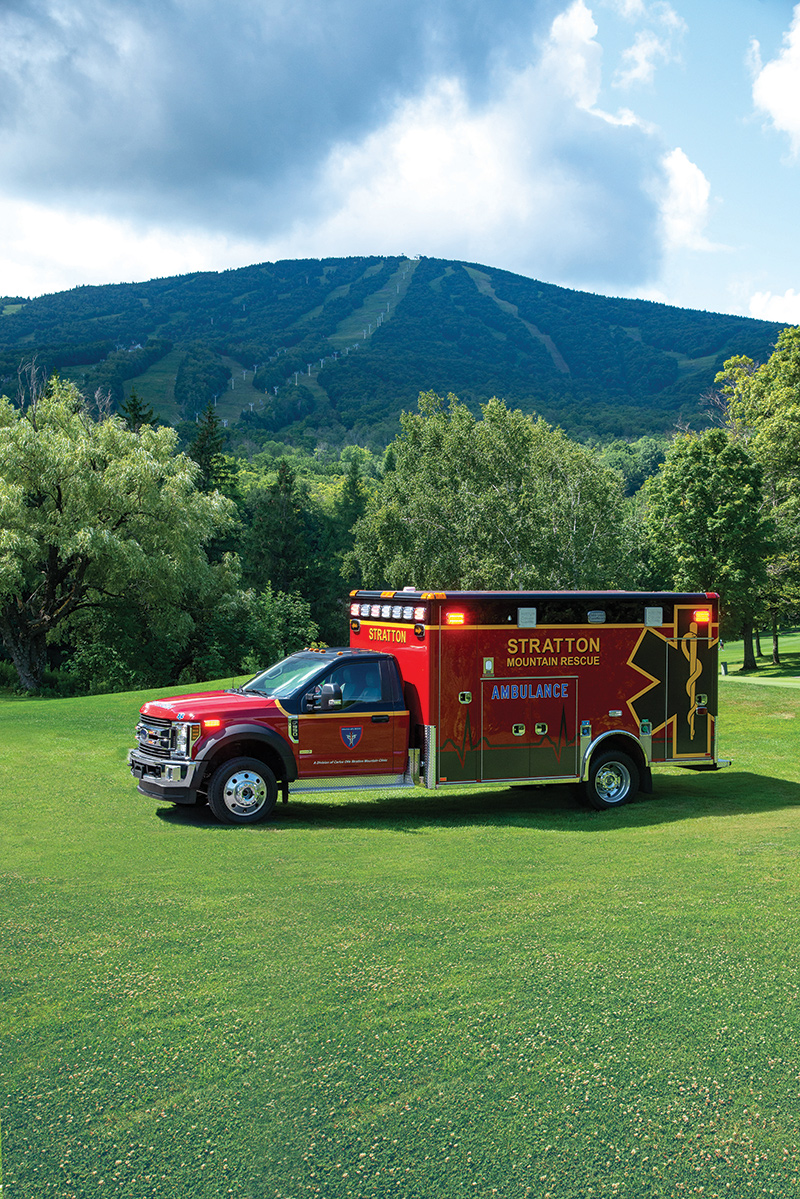 The staff at the Carlos Otis Clinic can successfully treat approximately 95 percent of those who come through the door, but occasionally someone has to be transported to a hospital and that’s where Stratton Mountain Rescue comes in. The rescue squad is a team of emergency medical technicians, and paramedics, most of whom also work as members of the Stratton Mountain Ski and Safety Patrol.

Stratton Mountain Rescue is also charged with maintaining and manning the clinic’s new state-of-the-art ambulance, and monitoring and caring for patients from the time they leave Stratton until they are safely in the hands of the hospital. The team also responds to calls anywhere in the resort community or the surrounding area as part of the local mutual aid system, covering emergencies for eight nearby towns when those EMTs are busy at another scene.

“It’s different from our role on the mountain,” said Steve Truskoski, an EMT who also runs the Stratton Safety Patrol. “Every day there’s a designated crew who work the ambulance, and we have to be ready to change our boots and jump in the rig whenever we need to take a patient from the clinic to the hospital.”

Recently Stratton Mountain Rescue also began a backcountry rescue program comprised of roughly a dozen patrollers who are trained to go out into the woods armed with survival gear, mapping programs, rescue packs, and other equipment to locate anyone who wanders off the trails and gets lost or injured in the woods. “Most of the rescues are pretty straightforward; we follow the tracks in and find them,” said Ski Patrol Director Chris Schilling, who runs the backcountry program with Truskoski.