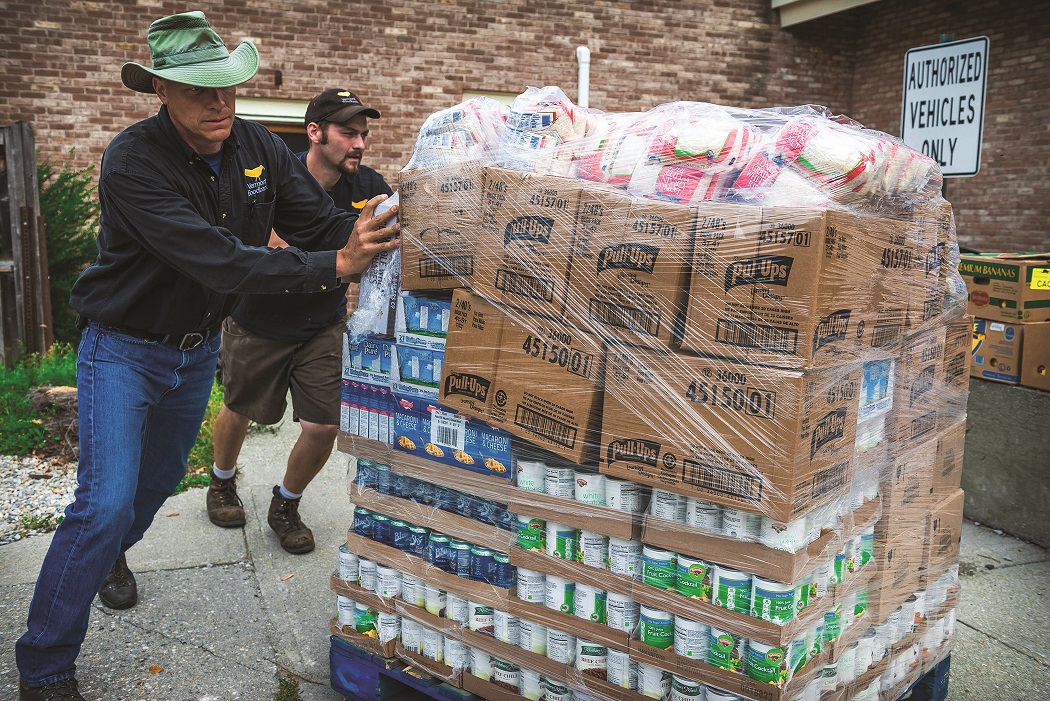 At Manchester’s Community Food Cupboard, the gift is being able to give away groceries.

For a few hours on Wednesdays and Thursdays each week, over in a jam-packed 800-square-foot corner at the Manchester Center Town Office, volunteers for the Community Food Cupboard greet their patrons one by one with big smiles and an even bigger gift of love for everyone—bagfuls of nutritious food.

Some of the groceries that the volunteers give away are canned goods, some are frozen, such as meats and vegetables, and even in the dead of winter, they find a way to provide fresh produce and fruit.

Some of the food is purchased with money given directly to the Community Food Cupboard by individuals, businesses, and charitable organizations such as The Stratton Foundation, and some of the food is delivered to their door from the Vermont Foodbank.

Some of the food is salvaged, that is, donated goods that would otherwise go to waste.

Some of the food is dropped off in small bags and little boxes by local residents who want to help in some kind way, and, in summertime, some of the food is grown in a garden over at the Equinox Valley Nursery on the southern end of town.

In all, it adds up to—really, sit down before you read this number—an astounding 20,000 pounds of food that flows in and out the doors of this one tiny pantry each month. That’s 120 tons of food annually. Now, in your head, picture five F-16 fighter jets piled up in a gigantic stack; that’s what 120 tons looks like.

“Our volunteers are like gold to me, and they manage to keep up with the task,” says Martha Carey, director of the Community Food Cupboard since 2000. She is the nonprofit’s only paid staff, just part time, and the operation she manages could not function without an army of willing hands. “Twice a month when the big truck from the Vermont Foodbank pulls up out back, we have a team of volunteers ready to help unload the food and carry it inside.” After each delivery, there is a mountain of bags, boxes, pallets, and crates higher than the tallest helper. “We can hardly move in here,” she says, “but we need this much inventory to feed our neighbors.” This one small distribution center serves nearly 400 households across 16 towns and villages, and an 18-member board of directors from six regional religious congregations oversees it. 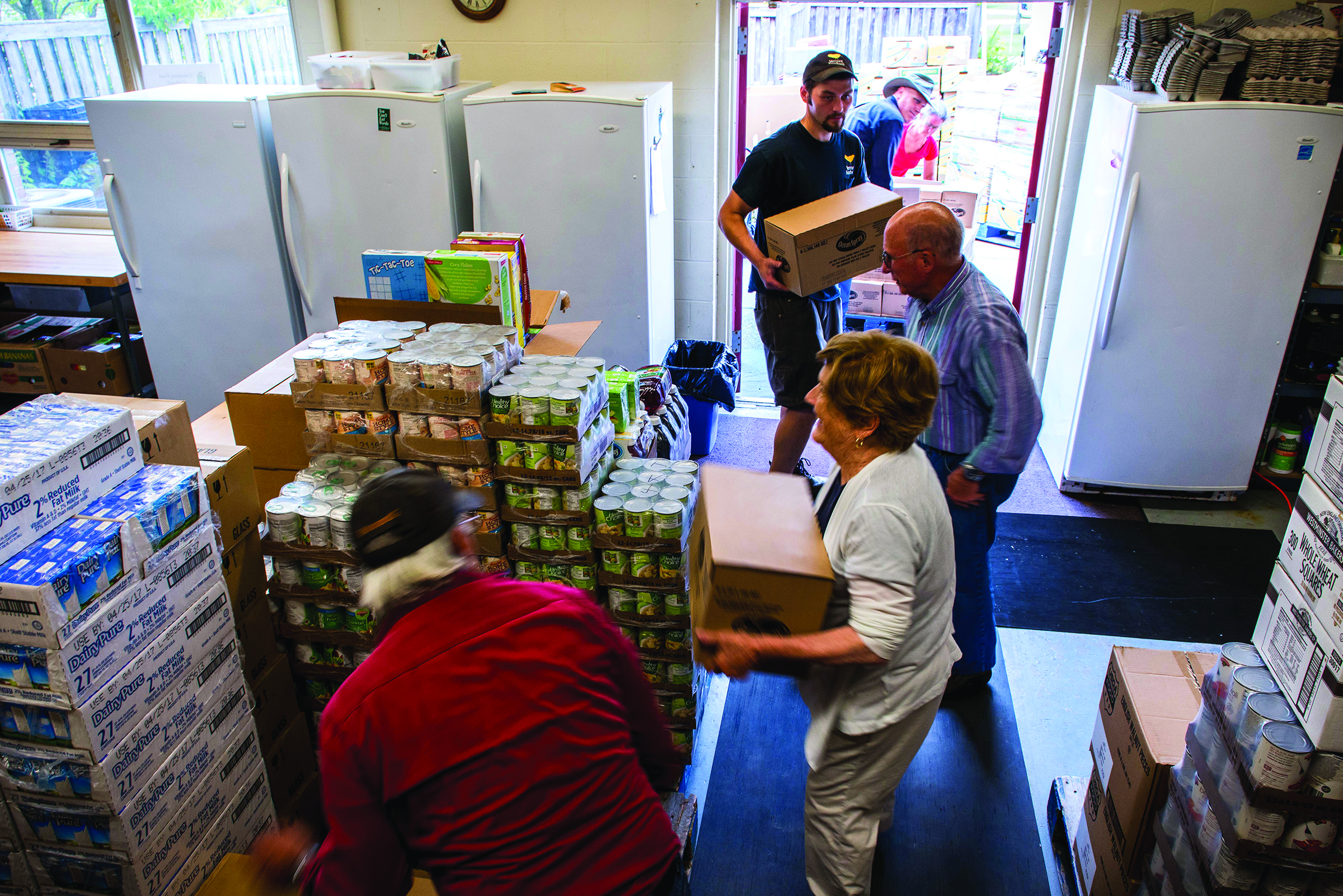 An astounding 20,000 pounds of food flows in and out the doors of this one tiny pantry each month.

“There’s no one description that fits the people who come each week,” Carey says. “People need extra food for so many critical reasons, and every time we see them, we understand a little more about what they’re dealing with.” The cupboard serves individuals and families who are unemployed or may be between jobs, people unable to work due to disabilities or illness, many single parents, and a surprising number of elderly residents trying to make ends meet on low Social Security incomes,” Carey explains.

Why do so many local households rely on this food distribution when people can just apply for what most of us still refer to as “food stamps”? Because, according to the Department of Children and Families, the 3SQUARESVT allotment for a family averages roughly $7.60 a day. Carey says, “That alone is not enough to feed a whole family.” More than 13,000 Vermonters over age 60 rely on 3SQUARESVT benefits, too. (3SQUARESVT is Vermont’s federally supported program for helping to fight hunger, and it is income based. For example, a family of four with an annual income of less than $44,868 could be eligible for benefits.)

Carey looks up at the wooden and wire shelves that are almost as high as the ceiling and says, “The one issue I deal with in here every day is space. We need more space.” She glances at the wide door that leads to the concrete loading area, and adds, “If we had the money, maybe we could build an addition out there.” But that’s not her biggest wish. Deb Moser,  chair of the Community Food Cupboard’s board, and Martha Carey both share the same desire. If they could change one thing it would be that whatever stigma people have about asking us for food the first time or about continuing to receive food would magically vanish. Moser says, “I see every one of the people we serve and each time I realize that this could be any of us at any time. We each feel that and so we want to do everything we can for them.”

The Community Food Cupboard is prohibited from discriminating based on race, color, national origin, sex, religious creed, disability, age, political beliefs, or reprisal or retaliation for prior civil rights activity for any program or activity conducted or funded by the U.S. Department of Agriculture.

The Community Food Cupboard is at the Manchester Center Town Office Building, 6039 Main Street, Manchester Center. Food is distributed on Wednesdays from 2 until 4pm, Thursdays from 10am to 12pm, and the same day again from 2 to 4pm. First-time clients are asked to sign a one-page form if they plan to come on a regular basis. To learn more about this program as a client, food donor, cash contributor, or as a volunteer helper, call 802-362-0057.

A recurring gift of $40 enables the local food cupboard to give a family of four nutritious meals every day for an entire month. Visit www.communityfoodcupboard.org to set up an automatic donation schedule monthly or annually. Retro idea—write an old-fashioned check and stick it in a holiday greeting card addressed to CFC, P.O. Box 864, Manchester Center, VT 05255.

“Rural poverty looks a lot different than it does on the streets of New York City,” says Judith Stermer, director of communications and public affairs for the Vermont Foodbank. “In Vermont, it’s far more hidden than other social issues, but it is big, and growing. We know that one in four residents in the state relies on a food shelf or meal site at some point throughout the year.” The true scope of the effort that the Vermont Foodbank makes is in the numbers: The food they provide reaches some 153,000 people annually. The food they distribute totals more than 11 million pounds a year and goes to 225 food shelves and meal sites statewide. Stermer says, “We all have a role to play in preventing hunger in Vermont. We can all do something.” The best way to know what to do is to subscribe to the Vermont Foodbank’s free quarterly newsletter. Call 1-800-585-2265, or get on the mailing list at www.vtfoodbank.org.