Luring fish back to the Battenkill

For generations the Battenkill lured anglers from around the world to its legendary banks promising a trout-fishing paradise, but some 30 years ago the river stopped giving up large numbers of fish, leading scientists, anglers, and concerned citizens to ask: What was killing the Battenkill?

“Back in the 1940s and ’50s the Battenkill was widely regarded as one of the best wild trout fisheries in the eastern United States,” said Michael Cooperman of the Moore Center for Science Conservation International who has studied the fishery. “Everyone from movie stars to the hoi polloi would come to Manchester to fish. But at some point between the mid-1980s and early ’90s the number of fish started to fall and the size started to decline and that caused a lot of concern.”

In response, the Vermont Fish & Wildlife Department restricted the Battenkill to catch-and-release, meaning anglers had to return the fish they caught back to the river. At the same time state, federal, and local biologists began to study the problem with an eye toward bringing the river back to its glory days. There were lots of theories about what was keeping the trout numbers down: Disease? Water quality? Water temperature? But eventually, in the early 2000s a consensus emerged: it was a habitat issue. 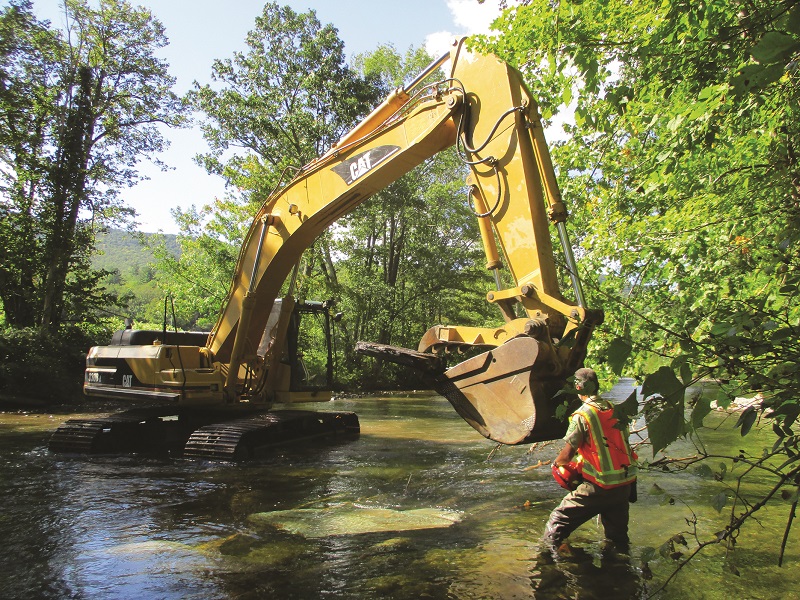 “There were deep-pool habitats that would hold a few big fish and ripple habitats that would hold some of the small fingerling-size fish, but no real habitat for the in-between stages,” said Carl Schwartz, a biologist with U.S. Fish & Wildlife Service. “There was a lack of cover for the midsize fish. The little ones could hang in the riffle but if the medium size ones went in the deep pools they’d just become part of the big fish.”

There were numerous reasons the Battenkill’s trout habitat declined, but the main causes were excess erosion and conflicts between river users. Erosion was caused by landowners cutting down the trees that held the land in place along the riverbanks. Some wanted to improve their views, others were seeking more acreage for farmlands. But the unintended consequence was a blow to the trout fishery.

“Trout like a river bottom with big rocks because the insects that they like to eat will live in all the nooks and crannies,” Cooperman said. When you have an eroding bank, it’s dumping dirt into the river, and all those nooks and crannies fill up and the river bottom looks like a paved road. You lose the insect population, the fish have no food, and so the river will support less fish.”

Meanwhile the Battenkill was becoming more and more popular with recreational users such as canoers, tubers, and kayakers. To clear a path for them, a lot of commercial renters removed fallen trees, branches, and stumps that were in the river providing cozy little fish condos for the trout. That eventually led to the main problem: a lack of cover and shelter for the fish.

“Trout need places to hide from predators, other fish, ducks, otters, and eagles,” said Cynthia Browning, executive director of the Batten Kill Watershed Alliance, created in 2001 to promote good stewardship of the river. “And they need deep pools and shade to get away from the heat in the summer. Trees overhanging the banks provide shade, and the big rocks, trees, and stumps that fell into the river provided cover and shelter for the trout.”

To address the issue, a coalition of local, state, and federal agencies, the Batten Kill Watershed Alliance and other concerned groups launched the Trout Habitat Restoration project, an effort to improve the trouts’ living conditions, to protect the banks from erosion, and to educate landowners about the need to save the trees. They began by installing man-made habitats in the river for the trout—structures made of wood and stone that would provide the cover and shelter lacking in the river. 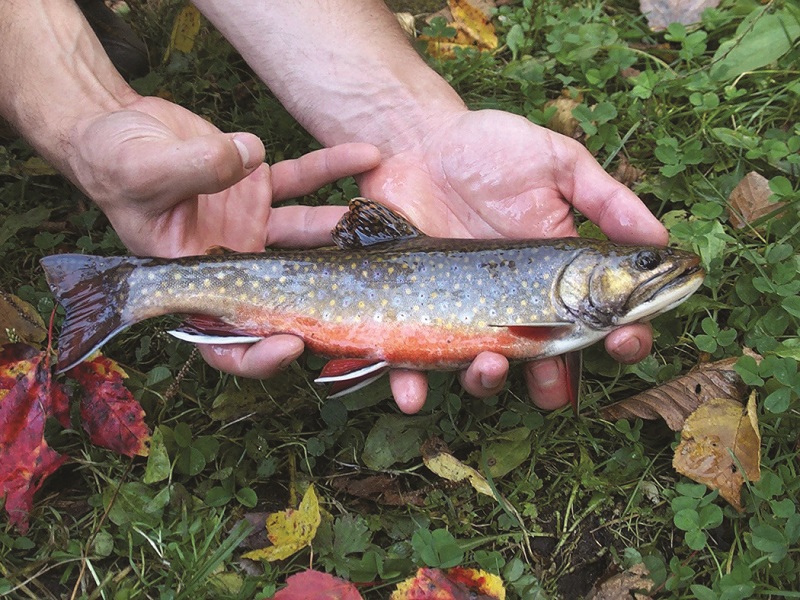 “The complex wood structures created many separate spaces for different-size adult trout to use without engaging in territorial competition,” Browning said.

In other words, the medium-size trout had places to hide so they didn’t become dinner for the big trout. And in every area of the river where work was done, the goal was to make the structures look as natural as possible.

“We’ve done in the neighborhood of 30 to 40 different projects in different areas of the river and we could do into the hundreds,” biologist Carl Schwartz said. “But when all is said and done, we want it to look as though we were never there.”

The restoration efforts have shown impressive success. Before the work was done, the Vermont Fish & Wildlife Department did a fish population count in the upper 700 feet of the river in the West Arlington project area. Only three adult fish and seven young were found. Once the work was completed last September, the agency did another fish population count and found some 76 adult fish and 60 young.

“This is an astonishing result,” Browning said. “It confirms again the hypothesis that the shortage of cover and shelter has been a limiting factor on the productivity of the trout fishery.”

Fly-fishing guide Ray Berumen of the Taconic Guide Service in Manchester has seen the success firsthand.

“In the spots where they’ve done a lot of conservation work the fishing is incredibly better,” he said. “Absolutely, 100 percent.”

Convinced that they found a solution to the declining trout population, advocates are now trying to educate the public and private landowners along the river about the need to save the trout. According to Lee Simard, a fish biologist with the Vermont Fish & Wildlife Department, if the public will help with conservation efforts there may not be a need for additional projects, which typically include at least 20 woodand- stone structures and can cost upward of $50,000 each. “Right now we’re focused on promoting good management of the land along the river and we’ve invited other organizations and community members to share that message,” he said. 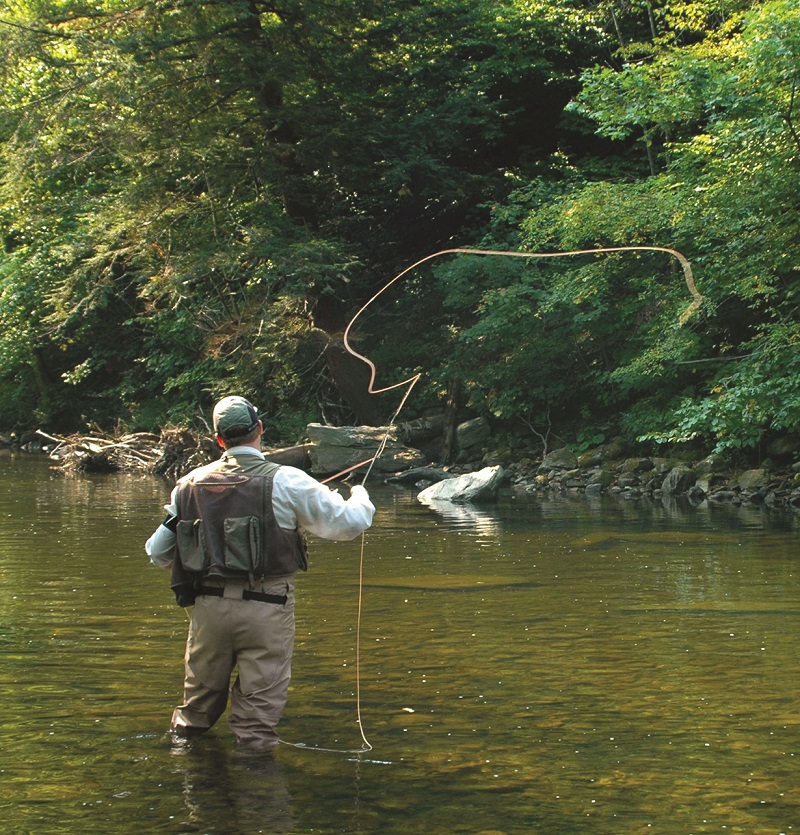 Because most of the land along the river is privately owned it will be up to the landowners to preserve the trees and vegetation along the banks that prevent erosion and to allow trees and branches that fall into the water to stay there. That said, it does not mean there can’t be some paths to the river or spots to take in the view.

“It’s a balancing act,” Simard said. “But what we’re trying to discourage is mowing everything right up to the edge of the riverbanks. Although some people think it looks nice, it is a detriment to the river itself.”

If private landowners can be convinced to plant additional trees and to preserve most of the vegetation along the banks, Simard is convinced that, given time, the Battenkill will recapture its reputation as one of the top fly-fishing spots in the country.

“We’ve seen that the river is capable of self-sustaining the trout fishery,” he said. “And in the areas where we’ve done this work, the population has come back. We’ve heard from a lot of anglers that they’re noticing it as well, and the word is getting out.”

And for the communities along the river, that is a win-win.

“I think people understand the service that a good, healthy ecosystem can provide,” Michael Cooperman said. “Fishermen will come and stay in the hotels, eat in the restaurants, shop in the shops. The riverfront property will increase in value. A good trout stream is good for the regional economy. A good, healthy trout fishery is money in the bank.”