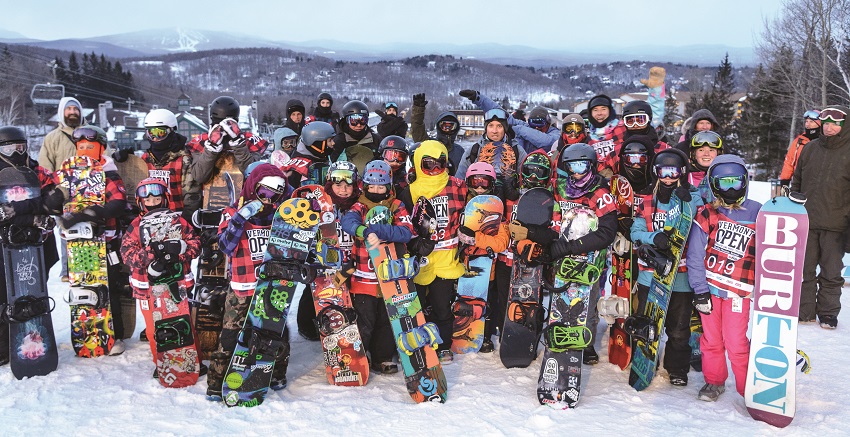 Ross Powers (back row with flaming board) and his young athletes at the 2017 Vermont Open.

When 2002 Olympic gold medal snowboarder Ross Powers was a child growing up in Londonderry, Vermont, there wasn’t a lot of extra money for equipment, competition entry fees, and all the other expenses that came with pursuing his snowboard dreams.

“My dad left when I was in kindergarten,” Powers said. “My mom worked at Bromley, and still does today, and did everything she could to get me to events.”

“When I was in the fifth grade, the Bromley Outing Club gave me $500 to get to the USASA Nationals in Snow Valley, California,” he recalled.

Powers took first place in his under-12 age group, his first competition outside of New England. That got the attention of Vermont snowboarding pioneer Jake Burton Carpenter, who began supplying Ross with equipment for both practice and competitions. Mountain Surf, a shop in the Price Chopper Plaza in Manchester, helped with some of the contest entry fees.

Fast forward a few years and Ross spotted a young snowboarder ripping it up at Bromley who reminded him a little of himself at that age.

“It was Tyler Emond. He was the youngest one of the next generation of snowboarders,” Powers said. “I would always see him riding and I found out that he wanted to go to Stratton Mountain School, but the family couldn’t afford it.”

So Powers donated $1,000 to help defray some of Tyler’s tuition expenses. 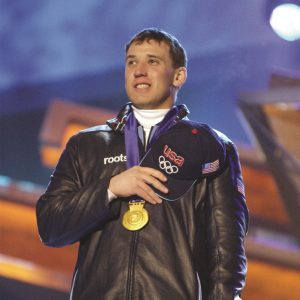 “I did it because people had helped me along the way and he was a good kid,” he said.

Emond went on to be a top-ranked freestyle rider and member of the U.S. Snowboard team from 2003–2006. Powers went on to start the Ross Powers Foundation—now called the Level Field Fund—dedicated to helping talented but financially strapped athletes pursue excellence in their sport.

“We started out helping snowboarders in Vermont, then branched out to all winter sports in Vermont, and now we do all seasons, all sports nationwide,” Ross explained.

“People gave to me to make snowboarding possible,” Powers said. “Now I can give athletes the same chance I had.”

And that’s a chance at greatness.

For more information, go to levelfieldfund.org.