Saturday morning and the parking lot at Second Chance Animal Center in Shaftsbury is full and visitors are crowding into the tiny reception area. A cheerful couple is here with their long time pet beagle to pick up an adoptee, also a beagle. The two dogs have already met several times and are clearly happy to see each other. Tails are wagging. An elderly couple has arrived to take some of the shelter dogs for walks. Some other folks are here to look to give another pet a forever home!

A mother has arrived with her two young girls to apply as Shelter Buddies. “Shelter Buddies,” are grade school kids who come to Second Chance to spend some time with the animals awaiting adoption. The mother watches, fondly, as her daughters are taken in hand by a boy of about their age. He’s been doing this for a while now and he knows the ropes. He leads them back into the area where the cats live.

“This one is Brutus,” he says, like the old hand that he is. And for the next two hours, he and the girls talk and play with some of the 13 dogs and 30-50 cats—the maximum number that the shelter can comfortably care for, until they can be placed in a home.

The boy’s name is Thomas and he is here because one of the Second Chance employees, Dare Munier, came to his school one day and did a presentation on how to be a responsible pet owner. Thomas was just one of the 1,000 kids Dare sees, on average, every month in their schools. Thomas was totally enthused. 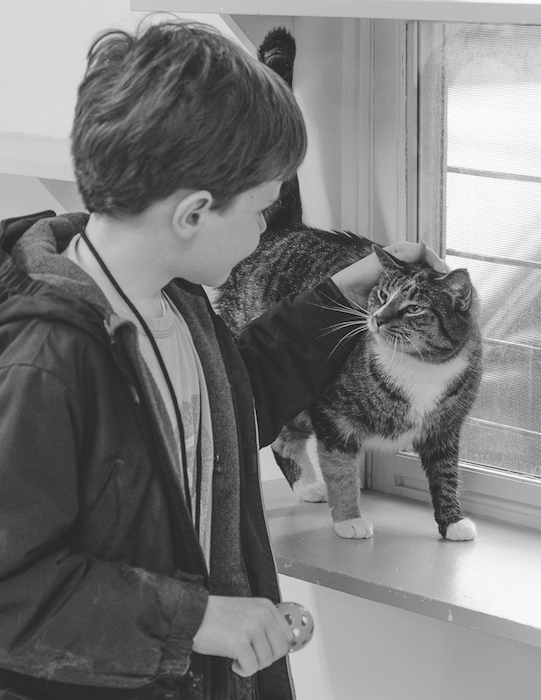 “He has always loved cats,” says Thomas’ mother Sheila. “And his father and I feel that building the habit of volunteerism and community spirit is a family priority. Thomas couldn’t wait to become a Shelter Buddy.” He also attended a Second Chance summer camp where he learned how to care for house pets, K-9 dogs, service dogs and small farm animals. And, he adopted a cat.

“What we’re about is helping,” says Cathi Comar, executive director of Second Chance. “People and animals. Helping people who want a pet and helping pets who don’t have a home find a new family.”

Cathi had only been on the job for two weeks, she says, when she got a call that more or less said
it all.

“It was from a woman who said she had a serious medical condition and could no longer care for her dog. It was touching. She was more concerned about the dog’s future than she was about her own health. She wanted to be reassured that we would find a good home for her companion.

It takes a lot of work, time and money to find the right match and home for the pets. The shelter does background checks on those who wish to adopt. This might consist of a talk with the family’s vet and questions about other pets in the household. When the adoption is approved, the animal leaves the shelter having been neutered, given all inoculations and implanted with an identifying computer chip.

For 40 years, the shelter has been housed in what was once a roadside bar and grill that has been repeatedly patched up and added on to, the way it is with “temporary quarters.” Cages are stacked on top of filing cabinets. A cat who doesn’t much care for other cats shares a back office with a staff member. “We’ve renovated and improved the facility as much as possible,” says Nancy Boardman who has been associated with the shelter for many years and is heading the capital campaign.

“She just fell in love with the cat,” says Cathi Comar. “And immediately drove to Second Chance to adopt it.” But once they met in person, she and the cat didn’t connect. She ended up adopting a completely different cat. “Often we find that animals pick us, we don’t pick them,” says Comar. “And we try to be very sensitive about picking up on those signals.”

Not long ago, two of the resident male cats, Tiger and Arnie, bonded very strongly. They even slept with their arms around each other. So strong was their friendship, in fact, that the staff would not allow them to be separated even though there were potential homes for one or the other.

But the staff held out until, eventually, someone adopted both.

“We all cried when they left,” says an adult volunteer who witnessed the adoption. “It’s what we’re here for but it was very hard to see them go.”

Second Chance is raising funds to build an entirely new, state-of-the-art animal shelter
in Arlington to meet the expectations of compassionate 21st century pet lovers and the needs
of animals they shelter.

It is easy to make a contribution to the Second Chance Animal Center Capital Campaign, with a one-time gift or a pledge over three years.

For more information, call Second Chance at 375-2409 or visit 2ndchanceanimalcenter.org.