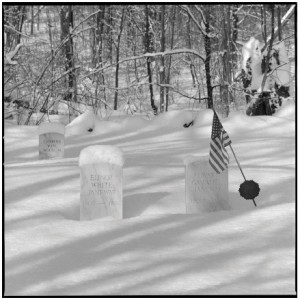 The modest graves of Edward and Elinor Janeway of South Londonderry. Ed served 10 years
in the Vermont Senate and was its president from 1969–1975. PHOTO: HUBERT SCHRIEBL

In Vermont, the past never disappears. Unlike other locales, where the new is built over the old or where there never was any “old” to begin with, here the old and the new quietly coexist, whispering to each other stories of the past.

Local history quietly makes itself known in Southern Vermont’s towns and villages. It makes its presence known to us today through street names, in stone walls snaking through the middle of a deep woods, in the towns like Newfane whose bones have remained unchanged for a couple of centuries. Little cemeteries pop up everywhere. They appear suddenly at the crest of a hill or around a curve in the road, weatherworn, and with stones askew.

This part of the past is present even in the midst of the developed resort world around Stratton. You’ll find it tucked back in the Stratton Nordic Center, and easy to get to on skis or snowshoes. Stomping through on a cold but sunny morning, I found a field of bright, blinding white, a surprising contrast from the dappled trail I was following. No skier can resist the urge to mess up such a pristinely blank canvas, and I was through the gate in a few quick steps. After a little sunbathing and a moment’s admiration of the view of Stratton Mountain, a small cluster of aging headstones caught my eye. They bore names of the Kidder, Styles and Estabrook families, inscribed with dates back to 1831. These were families who had lent their names to parts of Stratton and other parts of the region, which led me to wonder: who were they?

Local history quietly makes itself known in Southern Vermont’s towns and villages. It makes its presence known to us today through street names, in stone walls snaking through the middle of a deep woods, in the towns like Newfane whose bones have remained unchanged for a couple of centuries.

If you want to go hunting for history, an ancient, moss-grown cemetery is a good place to start. You wouldn’t be alone.

The short answer is that they were some of Stratton’s earliest, and most stalwart, settlers. The Kidders, for example, were one of the first 24 families to arrive in the town of Stratton before 1791, settling in the town’s northeast corner just below the top of the mountain. They lived here for three generations, on a family farm to the east of the mountain. The brook that flowed past the farm took their name, and in turn lent its name to the ravine it carved on the southern face of Stratton Mountain, as well as the Kidderbrook trail.

Being in Vermont, histories like this pop up like sugar maples (everywhere, and not always where you expect them). If you want to go hunting for them, an ancient, moss-grown cemetery is a good place to start. You wouldn’t be alone.

Daniel Barlow and Scott Baer, founders of Green Mountain Graveyards, are out there as well. The two of them have visited more than 300 cemeteries in Vermont, photographing headstones, monuments and the art inscribed upon them. “It’s a great way to explore the state. I go to towns I probably would never have gone to otherwise,” says Daniel. “And along the way, I’ve learned how Vermont was settled and how early development happened in early communities.” 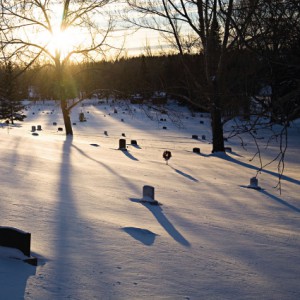 What draws us to cemeteries? They have a distinct sense of stillness and quiet, and the park-like beauty of the grounds is alluring. Strolling a path through headstones and monuments lends us a connection with the local history of the place. This is nothing new. New England cemeteries have long been a source of inspiration for authors and artists: Nathaniel Hawthorne was known to wander the cemetery in Salem, Massachusetts, borrowing names from headstones for his characters.

In Vermont’s old burial grounds, quietly sited near churches, town centers and old family farms, each element of a headstone fills in a bit of the state’s history, from the name inscribed to its fading artwork and even the type of stone.

In Vermont’s old burial grounds, quietly sited near churches, town centers and old family farms, each element of a headstone fills in a bit of the state’s history, from the name inscribed to its fading artwork and even the type of stone.

The oldest stones, usually dating from the late 1700s to early 1800s, are carved in slate. The dark grey stone is very hard, supporting delicate engravings while standing up to Vermont’s rough winters (except when the slate splits along its vertical striations). Slate was replaced by marble, a lot of which came from southeastern Vermont, according to Green Mountain Graveyards. Marble, however, erodes easily and these stones are often rough, tarnished with grey and sometimes hard to read. Granite became the stone de rigueur in the late 1800s, especially in Vermont—Barre was known for producing high-quality, weather-resistant granite. Barre’s granite industry was so successful, in fact, that Daniel says one-third of all monuments in the U.S. are either made of Barre granite or were carved by a mason trained in the town.

The work of those masons—some of New England’s earliest artwork—has other stories to tell. Vermont is unique in this respect, not because of what is carved, but because of what isn’t. The death’s head, a stylized skull, often depicted with wings or crossed bones, is an iconic image in New England cemeteries. “However, Vermont doesn’t have any of those— you find those in New Hampshire and Massachusetts, but because Vermont was settled a little later, we don’t have cemeteries old enough to show that artwork,” explains Daniel. 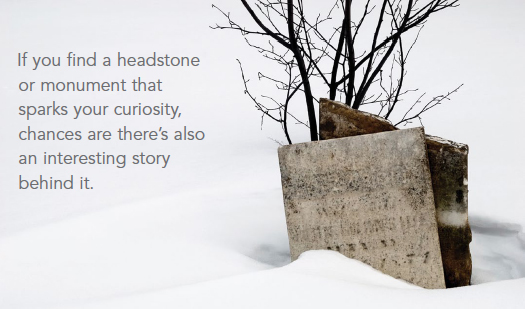 By the time Vermont’s cemeteries were in use, people no longer focused on the macabre, physical aspects of death. “As society’s views of death softened, the focus shifted from the body being in the ground to the idea of the soul going to heaven. Death’s heads transformed over many years to cherub faces,” Daniel says. Daniel finds a lot of weeping willows (a symbol of sorrow, but also immortality) and carvings of hands with index fingers pointing up, directing the soul to heaven.

While headstone artwork holds telling clues to the mind of society at large, the names can be a portal to personal history. Vermont’s graveyards have their share of famous residents—Robert Frost lies buried in Bennington; President Coolidge and his wife, Grace, in Plymouth; Robert Penn Warren, who wrote the Pulitzer-prize winning novel All the King’s Men, rests in the town of Stratton—but theirs are not the only interesting stories.

One of Daniel’s favorites is that of Colonel James Fisk, memorialized with a conspicuous obelisk surrounded by four statues of nearly naked women in Brattleboro’s Prospect Hill Cemetery. “It’s such an odd thing to see in Vermont,” Daniel says, “that we did a little investigating.” Turns out Fisk was notorious in life, too—he was a somewhat dishonest robber baron who made a fortune from several crooked schemes, kept a mistress in New York, and eventually met his end at the business end of his partner’s pistol.

If you find a headstone or monument that sparks your curiosity, chances are there’s also an interesting story behind it. Start with online research, but know that it only goes so far. Daniel recommends talking to longtime residents and visiting local historical societies and libraries, which often have older books that incorporate original documents. “There are people across Vermont who love their local cemetery, and who volunteer to weed and plant and mow. Many of them have also done the detective work necessary to decipher headstones,” he says.

It goes without saying that hunting up Vermont’s history is a lot more fun if you can’t find everything on Wikipedia. ◊

Meryl Robinson is a marketer and writer who lives in Brattleboro.