At an old and very good friend’s house one night, we were standing around the dining room table, where all was ready for our party to sit down to a feast together. There was an arrangement of flowers in the center of the table and it was flanked by candles. There was pressed linen and polished silver at each of the places around the table. Bone china and wine glasses that seemed to throw off sparks as they reflected the candlelight. The surface of the table, where you could see it, was waxed and the grain of the wood glowed, looking almost alive.

J.K. Adams, located in Dorset on Route 30, has been manufacturing heirloom- quality products for cooking and entertaining since 1944.Most of their wooden products are made by hand in Vermont using sustainably-harvested North American hardwood. A second- generation family-owned business, J.K. Adams also boasts a retail emporium at their Dorset factory, that is filled with a wide selection of their products, as well as an expansive array of kitchenware and homeware. Their wood products— cutting boards, coasters, trivets, napkin rings, etc.—give a holiday table an organic and festive feel. For an interesting touch, there are also slate serving boards and coasters that you can use as place markers, writing the guests’ names on them in chalk.

“I’ve had so many wonderful times at this table,” our host said. There was something approaching reverence in his tone. He seemed, almost, to be expressing a feeling a gratitude … to the table. And why not?

You don’t think much about a dinner table when it sits there unoccupied and unused. It is just furniture. Something you need to dust, from time to time, and to move when you have to vacuum. It can be a handy place for putting packages. It helps if the table is well made or old or somehow distinguished. But it is still just a table and, somehow, lifeless. But in the last months of the calendar year, the dining room table comes into its own, especially in New England.

…into the head of each table Plough and Stone inlays a replica coin of the currency of Vermont that was used back when the state was an independent republic, which are now minted in Rupert.

You can’t have a proper feast sitting at a breakfast counter. Or eating off TV tables. One of the flaws of the Roman Empire (and there were many) is that people ate lying down. It is not possible to eat a ceremonial meal while lying down. (Or while wearing a toga, for that matter.)

So when it comes time for the serving of our most ceremonial meals, we depend on the table for support. Literally, of course, and far beyond that. The table becomes, then, something just short of an altar.

Before you can decorate the feast table, there needs to be … a table to decorate. Ben and Kali Lennon, Owners of Plough & Stone in Manchester, build them of locally and regionally sourced woods, including pine, cherry, ash, maple, and black walnut. They use vintage American-made machinery, restored by a father- and-son business in Rutland.

And into the head of each table they inlay a replica coin of the currency of Vermont that was used back when the state was an independent republic, which are now minted in Rupert. “Food is totally our passion, and when we first got together we cooked a lot,” says Kali, and they wanted the perfect piece to complete the center of their shared space. “We were thinking about the whole farm-to-table movement, the culture of craft beer, and the refined Vermont entertaining vibe. And we wanted to make a push to bring people back to the table, shut off their phones, and enjoy good conversation.”

The objective, when you are planning and preparing one of those big, important dinners— Thanksgiving, Christmas, Hanukkah, or any big, ceremonial feast— is to make that table groan. You want a lot of food on top of it and you want a lot of people around it. And you want it decorated with all the treasures and heirlooms that have been handed down and have graced your family’s tables for decades. You want your dinner guests to gasp, “Oh, my! This is just beautiful.”

This is New England so it isn’t hard to find things that will give the table a sense of the season and make it charming to the eye.

It takes some thought to get it right, but here, in New England, there is a tradition for that. We came up with the whole Thanksgiving thing, after all, and that is the apotheosis of the American ceremonial meal.

If the table isn’t groaning, then you aren’t doing it right. Norman Rockwell caught it, just perfectly, with the painting called Freedom From Want. The painting was created for The Saturday Evening Post magazine in 1943 when Rockwell was living here in Arlington, Vermont. There is gratitude, mingled with pleasure, in the face of the matriarch who is holding a platter upon which rests an enormous and perfectly roasted turkey. And in the foreground, around the table, are seated Rockwell’s family members
and friends from his hometown of Arlington. These folks actually posed for the painting. Rockwell photographed them and painted their faces into the painting—an interesting little side note, especially for us here in the Northshire. But the emotion depicted in that painting is universal. Family and friends brought together to … well, to be together and, not incidentally, to eat that turkey and all the other good things that have come out of the kitchen. The painting has become an iconic representation of family holiday gatherings in general. The Post first published the widely admired painting with a corresponding essay by Carlos Bulosan as part of a series of articles called Four Freedoms. Bulosan’s essay spoke on behalf of those enduring socioeconomic hardships domestically at a time when the focus of the nation was primarily on the sociopolitical hardships abroad, and it thrust him into national prominence.

Kerry Comollo, owner of Vermont Kitchen Supply on Rt. 7A in Manchester Center, has in inventory something—or many things—that will add to the festive feeling of the holiday table. There are so many things, small to large, napkin rings to pepper grinders, cookie jars to stew pots that can make that small but essential difference in the meal a good cook brings to the holiday table. You may not know you need it, but somewhere in the profusion of her inventory, she will have it. “I like to think that we have everything that your grandmother might have used (or wished she had had) to create the holiday meals you remember from your youth.” 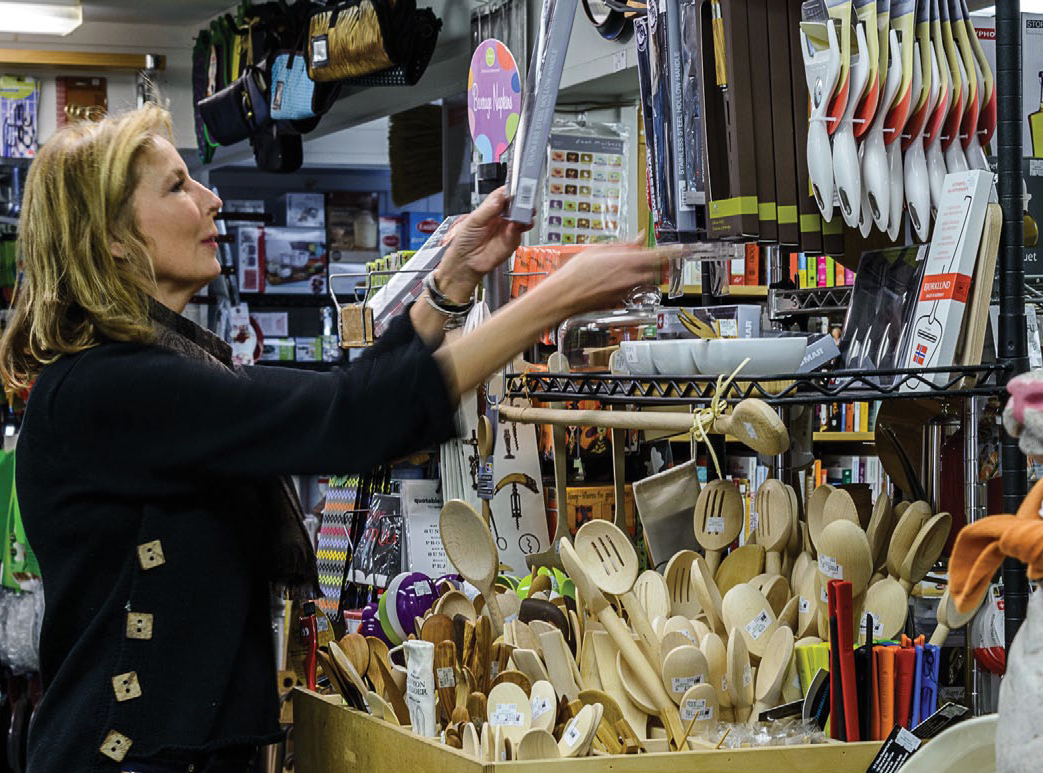 We don’t get a particularly good look at the table in Rockwell’s painting. He was more interested in the expressions on the faces of those who were blessing the food which they were about to consume. Amen.

But we can be sure that the table was artfully done. It would have been an injustice to the people seated around it, had it not been. So … what to do with the table? How to make sure that it rises to the occasion on one of those feast days?

Well, this is New England so it isn’t hard to find things that will give the table a sense of the season and make it charming to the eye. What else were all those gourds growing for all summer long, if not to make a centerpiece on the holiday dinner table. Pumpkins will also do. You can cut some spruce boughs or some creeping cedar and if there’re still any around, you can use high bush cranberries. Grape vines. Any colorful leaves that remain. There is a lot that is growing outdoors that can be used to decorate the table for the feast. You just need to use some imagination.

“I like to think that we have everything that your grandmother might have used (or wished she had had) to create the holiday meals you remember from your youth.”

Because this is Vermont and deer season recently ended, you might have venison along with your turkey. Antlers can be made into the foundation of a centerpiece. And if you are eating turkey, not venison, well there is a lot that can be done with feathers. 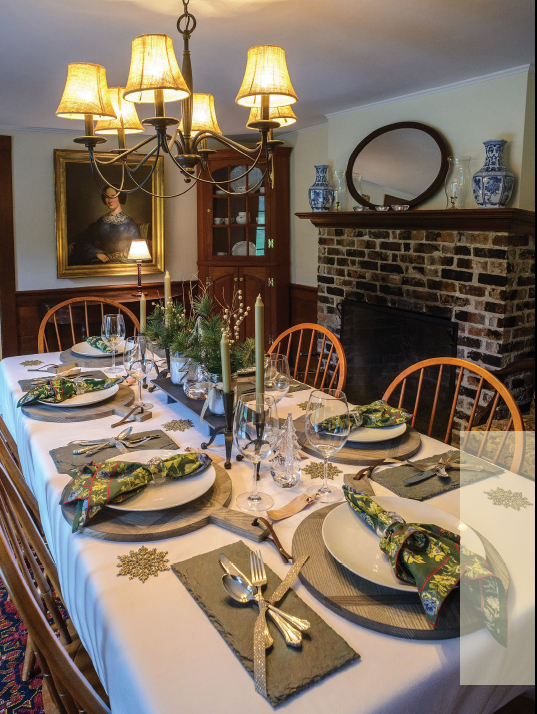 The feast table should not be austere. Colorful napkins are in order. Use the biggest glasses and goblets you have and polish them so they catch the candlelight. Use the oldest and sturdiest serving utensils and dishes. Give the table an opportunity to show you what it can do.

Use decanters, if you have them, for the wine. Big carving platters. Gaudy carving tools and make sure that the knife has a good edge. If you have to start sawing at the turkey, the table will rock and something will tip over. A full glass of wine, at the least, and maybe a candle.

“My, but we’ve had good times around this table!”

Which, by the way, you should use profligately. You can put small, individual candles at each place. Seat them in little mason jars or, better, carve out candleholders from pinecones or small pumpkins. For the bigger candles, use the most imposing holders you have. If they are silver, polish them extravagantly.

And that, perhaps, is the concept to keep in mind: extravagance. This is a special meal and the table is there to help make it so. Your table can take it. It wants to groan under the weight of all that good food, so long in preparation. It wants to be remembered, months later, when it is bare and not being used for anything … just taking up space.

It wants you to look at it and think, with gratitude, “My, but we’ve had good times around this table!”