Editor’s note: Ben Benedict has a solo architectural practice, H.H. Benedict Architect, in Shaftsbury. A few years back he was approached by a couple who had bought a gracious old house in Bennington. They asked Benedict if he could help them bring the house into the 21st century functionally, while maintaining its antiquity. Not an easy feat. However, today the house is net-zero in terms of energy use with both geothermal and solar collectors. And it even has air conditioning. Here is Benedict’s recounting of his adventure with this old Vermont house.

As you approach by car from the east, the white house and red barn on the hillside communicate 19th century contentment from a half mile. It’s one of a thousand picturesque reminders of lives well lived in the Green Mountains but this house in Bennington is hiding 21st century secrets.

Maria and Tom Ascher bought the house in 1988. They were living in Chicago at the time and have since moved to New York City. Maria grew up in Bennington and wanted to be reunited with her family, at least on weekends and during summers. They both loved the look and feel of the old house as well as the sense of graceful antiquity that it emitted. So from the moment they took possession and began working on the property, they followed the guiding principle that any improvements should reinforce the house’s early identity. 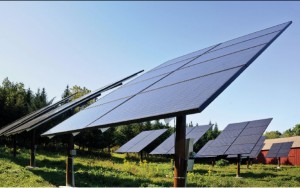 The photovoltaic array in a south-facing field produces more power than the house uses.

A few years ago, when the big project of adding family living space to the house came up (big enough for growing boys and Maria’s accomplished cooking skills) they sought my professional help and immediately regretted it. Even though they imagined using the 90-year-old shed that stretched north from the house, it was never intended to support 21st century indoor life. Foundation, framing and space were inadequate. So, I suggested replacing the shed with a new building of similar proportions and character and turning back to the west with a hidden garage ell nestled into the hill. I made all the typical architect’s arguments about writing a new chapter in the house’s story that evolved from its past. I allowed as how we could make a graceful new entry to the house with adjacent bath and mudroom, a laundry/potting room, a well-appointed kitchen, pantry and family dining spot complete with fireplace, a screened porch with a view and room for hungry teenagers to lounge. This, plus back entry and garage and cozy upstairs master bedroom and bath could all happen within a high-tech envelope that would keep future generations comfortably gobbling panini and quaffing grandma’s basil lemonade. We could (radiant) heat and cool the addition with the latest ground source heat pump and ride into the future green and clean. Admittedly, a large task. 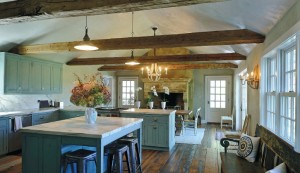 It’s the secret of every good architect to have good clients. Tom and Maria were involved every step of the way. They had a clear idea of what they liked yet they were open to suggestions. As in the best cases, the collaboration yielded a happy result. There were changes along the way including a movie theater/man cave in the full basement to share space with the mechanical system components. While hurricane Irene demonstrated that the floor of the basement was below the 100-year high water table, a subterranean assault worthy of the Army Corps of Engineers fixed that problem.

The contractor for the job, Paul LeRay, had to devote plenty of extra craftsmanship milling and installing antique barn boards to fashion a floor that seems to glow with generations of pride, sourcing old beams and building handsome cabinetry, exact to a 1/16th inch, which was finished by a local painter and topped off with hefty Danby-quarried marble countertops. A legion of sub-contractors, including a local stonemason, pieced together a 1697 fireplace from a French country house that had languished in the barn for years.

The house was carefully finished with plaster walls throughout. The restored roofs are now topped with copper standing seam roofing, and the house is surrounded by stonewalls built with mossy, stained rocks recycled from decrepit ancient stonewalls as well as new bluestone walkways and a patio. In addition, wells had to be drilled and geothermal heating and cooling installed. The triumvirate of architect, contractor, and client, working together, made every considered detail come to life.

When the addition and subtraction were complete and the bottom line was zero, it wouldn’t matter that the old part of the house was using a lot of power.

The seeds of the second stage of the project were sown by the first. The new portion of the house (even with its state of the art kitchen) was very energy efficient because of its tight construction, modern insulation and geothermal mechanical system. Overall, though, the house consumed a lot of energy in the form of fuel oil and electricity. The old portion of the structure leaks air from a thousand cracks and is largely without insulation. Tom and Maria like it that way. They didn’t want to replace the windows and doors and bore into the plaster or the siding to pump in insulation. And, I was leery of upsetting the equilibrium of the house. (There’s a substantial list of old houses that, after conventional insulating, have developed moisture problems that have led to multiple destructive, long-lasting issues.) The reasoning was that if we could convert the heating and cooling of the old house to a similarly efficient ground source heat pump that ran on electricity, we could manufacture that electricity on site. When the addition and subtraction were complete and the bottom line was zero, it wouldn’t matter that the old part of the house was using a lot of power.

So, plans were made to refit new mechanicals into the old house. We chose to change from hot water heat to hot and cold air. Removing the radiators in each room was aesthetically rewarding in every case. In order to get conditioned air to each room we put ducts and air handlers in the attic and in the basement. The heat pump that uses water from deep wells to cool in summer and warm in winter, feeds the coils in the air handlers. The water heater was converted to a super-efficient electric 80-gallon unit. There is a back-up oil-fired boiler and a sizable propane-fired generator that, like a belt and suspenders, can handle any emergency. After sourcing custom diffusers for the floors that have an old world feel, we were half way there. 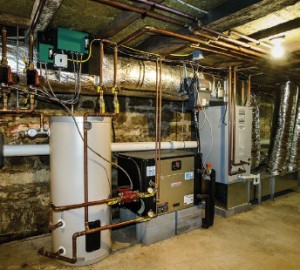 While not everyone has room for a 20KW photovoltaic array, the Aschers have the perfect south-facing field across the road behind a second barn. The plan was to erect 88 photovoltaic cells, each one of which generates 230 watts in full sunshine. Mounted on eleven stands that can be manually tilted for optimum summer and winter sun, the direct current generated by the panels runs through inverters, a meter and then out to wires on the road and thus into the power grid. The Aschers receive two bills each month: one for power used and one for power produced. After a year, it turns out that the photovoltaic field produces more power than they use.

There are a number of state and federal incentives to employ solar power and a generous mandated rate structure for selling electricity produced on-site back to Green Mountain Power. Part of the reasoning for the high rates paid for power produced and sold back to the power company (nicknamed “negawatts”) is based on the idea that local power generation allows the power company to build less infrastructure which means less capital expense on their part. The result is that calculations using conservative predictions of future power rates in this case indicate that the investment in the photovoltaic field is a good one compared to other investment opportunities. And, the happy result is that no greenhouse gases are emitted.

Old houses hold many attractions. They embody a history that suggests the perseverance of a simpler way of life. Residents of old houses often feel like caretakers, one owner in the middle of a chain of owners. Each generation adds something that becomes part of the history of the structure. In this case, the Aschers have guaranteed the continued survival of their house in substantially unchanged form by transforming it into a comfortable, modern net-zero energy house still cloaked in its original old New England garb. It is truly a house with hidden attributes. ◊

In addition to his architectural practice, Ben Benedict also teaches at Williams College (including a class titled Sustainabuilding.)