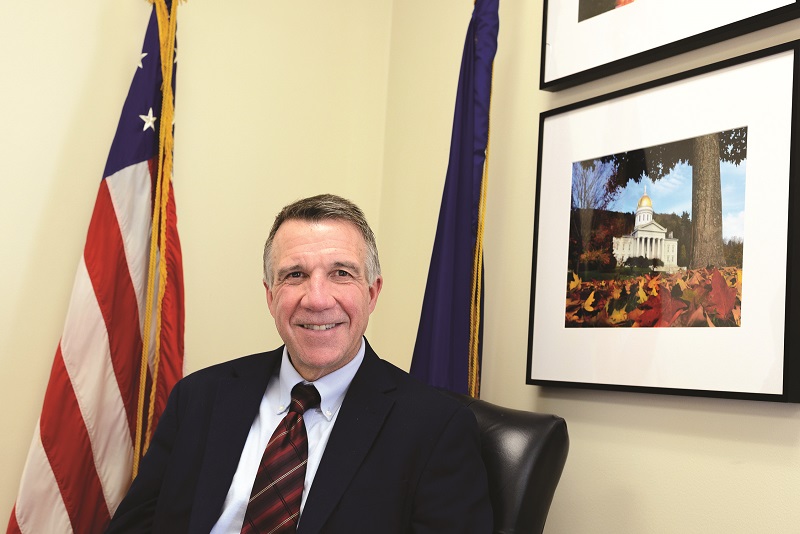 Republican Phil Scott was sworn in as Vermont’s new governor this month. Formerly lieutenant governor and a state senator, Scott, who lives in Berlin near his hometown of Barre, is a lifelong businessman who until recently was part owner of DuBois Construction in Middlesex. He won the election on a platform of fiscal responsibility, and last month he sat down for this conversation with Stratton Magazine.

You’ve said you want to revitalize Vermont’s economy. Can you talk about key steps or initiatives?
When I became lieutenant governor, I started a Vermont Everyday Jobs Tour, where I went out every day and worked in someone else’s shoes. I did 35 jobs, throughout Vermont, working in a bakery, as a beekeeper, school teaching, making snow, on the ski lifts, you name it. And the common theme was that Vermonters were working two or three jobs just to make ends meet—to pay their taxes, their fuel bill, their mortgage. And I thought, we’ve got a real problem on our hands.

When I see that a third of our population is involved with Medicaid, that’s telling us something about our fragile economy. When you look at our demographics, we have 30,000 less people in the age group 25 to 45 than we did seven or eight years ago. And that leads to other impacts. We still have to pay for government services—so there’s more burden on the rest of us. In our health care system, we have an aging population that needs more medical services, so that increases the cost of health care.

Our focus will be to attract those who would love to live in Vermont, with more opportunity. We need more jobs—but also, the cost of living has to be in line with wages. I call it a crisis of affordability. So that’s the area we’re focusing on.

Affordable housing is important, not just for those with low incomes, but for our working class. I think most of us can agree that we need more affordable housing. So we need to look at the barriers that are in the way of accomplishing that, and be able to eliminate those obstacles.

”Our focus will be to attract those who would love to live in Vermont, with more opportunity.”
– Governor Phil Scott

How can you stimulate the economy without raising taxes?
We’re trying to build a formula where we look at growth in wages—and not just overall wages. I’m very concerned about the working class. If we determine that wages and the economy grow at 2 percent, that’s what we grow the budget at, 2 percent. We live within those means. Property taxes can’t continue to grow the way they have—and that gets tied back to education costs.

If you look at what we spend, $1.6 billion to educate 86,000 students, that’s 20,000 less [students] than 20 years ago. So we need to think outside the box, have the courage to deliver a 21st-century education in a much different way. How do we give the high level of education that we want and deserve? Because education is part of how we grow Vermont, and how we become a magnet to others as well.

You’re known as somebody who can work with both sides of the aisle. How do you work with a Democratic legislature?
Well, I’ve never served in the majority. Twenty years ago, I had no interest in politics, but I was a frustrated business owner, who was starting to complain a lot about what they were doing to me in Montpelier, so I decided to step up and run. And admittedly, when I was elected to the Senate, I had this vision of everything being black and white. It’s like a business: yes or no. Well, I quickly learned that there’s a tremendous amount of gray area there. It takes a lot of thought, a lot of listening, a lot of communicating.

We’re going to be public servants. You respect the offices held by others, you treat others the way you want to be treated. You’re going to disagree, but I believe there will always be opportunities to work together. I think housing is one common goal that will help our economy, so that’s one I want to focus on initially.

Nobody seems to know what’s going to happen with the Affordable Care Act. How can you protect people’s coverage, especially those who are the most vulnerable?
I’ll put myself in the category of not knowing what’s going to happen. Truly we’re in unique times. But I have faith in our democracy. I’m not sure that all pieces of the ACA will be eliminated—there will be some good kept there. And I firmly believe there’s going to be something to replace it, or maybe some flexibility in determining what will work for your state.

Part of our problem is we have a small pool. Other states are facing the same thing, so why not get together in some way? There may be an opportunity. But we will protect Vermonters. I will work with our Congressional delegation, as well as legislative leaders, in trying to do what’s right. Public safety is part of our responsibility.

Vermont’s Comprehensive Energy Plan calls for the state to keep making major strides toward a renewable energy economy. Do you think that’s realistic, and will it be a priority for your administration?
Yes, I think it’s realistic. It’s going to be challenging—90 percent renewables by 2050 is a steep climb. But at the same time, technology’s changing every day. I’m not a fan at all of ridgeline [wind power] development; I want to protect our natural resources. And there are other opportunities: solar, hydro, biomass. Also, Québec is energy rich, and we should take advantage of that. When you talk about renewables, their large hydro is an opportunity as well. 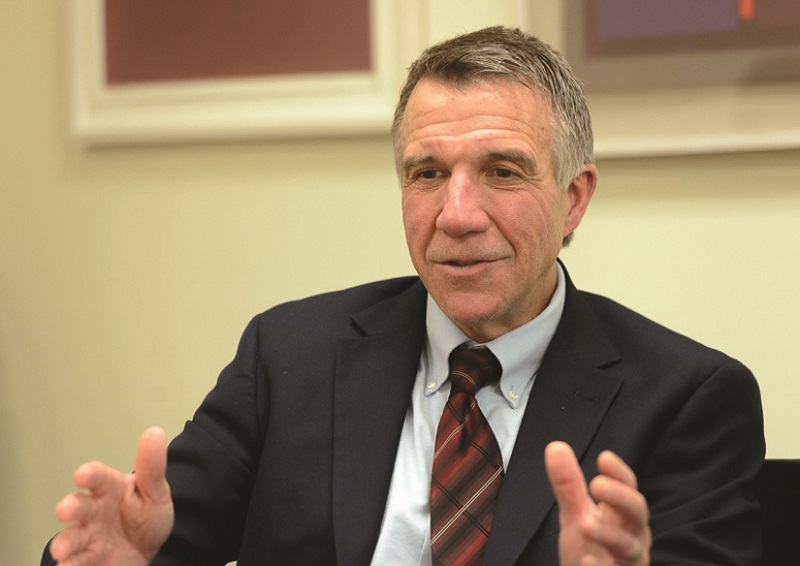 A lot of our readers are second-home owners. Is there anything in particular you can say to them?
Well, first of all, we can thank second-home owners. I mean that sincerely. They pay a lot in property taxes and ask for somewhat little in return. They could live elsewhere, but they’ve chosen Vermont, and we’re appreciative of that. I’d just have them know that I’m sensitive to how fragile that can be, determining whether they live in Vermont or New Hampshire or wherever. We’re appreciative of them being here.

What about your goals for the first 100 days? Are there two or three specific things?
Legislative adjournment. That’s my goal! It may not be likely for the first year, but I firmly believe, after serving in the legislature for the past 16 years, that we can get our work done in 90 days. I believe the citizens’ legislature is truly effective. But when you tell your employer, “I’d like to serve, I’d like to do my public service,” and they ask, “How long are you going to be gone?” and you can’t answer them, then I think we don’t always have people from all walks of life.

The rest of the first 100 days? Having a budget where we can live within our means. Providing for pro-growth legislation, in terms of education, job training, and seeking ways to incentivize housing for our workforce, as well as creating opportunities for growth in the economy. That’s growing businesses that are here in the state, as well as trying to encourage new ones to come as well—without watering down our standards.

It’s more about process than it is about the standards themselves. We also have areas in government that need to be modernized, like upgrading our software. I know we’re missing opportunities to modernize in a way that makes us more efficient, and gives us better outcomes.

This has been a real pleasure. Thank you so much.
Well, thank you! I appreciate it.