When John Schaub was growing up in New Hyde Park, Long Island, he lived near the Long Island Railroad and loved to watch the trains. “In my generation everyone had model trains in the basement,” John says, and his father set up a model railroad for him. One Christmas, John helped his father, a photographer, create a model train layout in the front window of his photography store, building a diorama and installing the tracks. For John, what began as a hobby eventually became an art and a business. He designs, builds, installs and repairs model railroads and has an auction and consignment service, handling from a few pieces to entire estate collections. “I’ve worked in estate disbursement for over twenty years,” he says. “I often work on eBay selling and trading trains for clients who want larger setups, as well as buying and selling collections. I added an historical ephemera business as a sideline when the recession hit.” He has a website www.modelrailroadsbyjohn.com and is planning to start a retail business in his Arlington home. “I balance selling and creating,” he says. He will design and build a train layout from scratch, depending on what the client wants. “I fell into it naturally,” he says. He was inspired by displays at the New York World’s Fair in 1964-5, “especially the dioramas. I was nine years old and I loved the General Motors Futurama exhibit. It was a ‘benchmark moment’ for me.”

The train tracks he builds run through dioramas he creates of surrounding landscapes or city scenes that often tell a story. 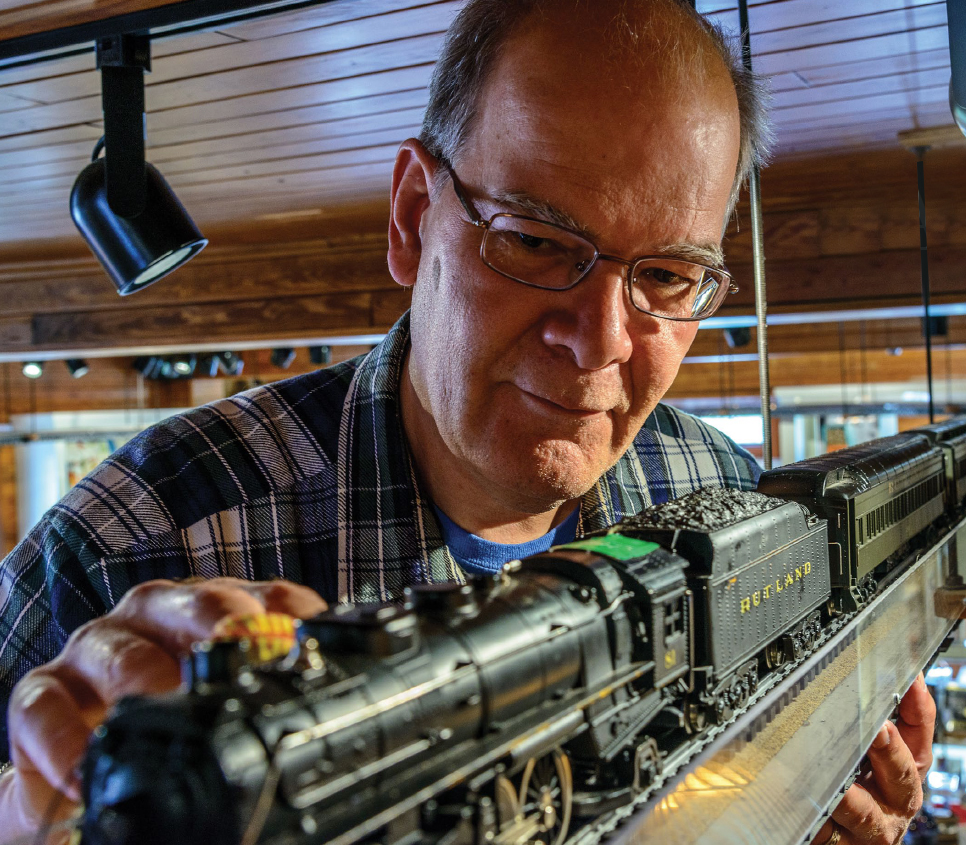 John Schaub fine tunes one of his model train creations.

He says, “The internet has opened up the business. There’s a brotherhood/ sisterhood of people who just love trains.” Some are older people who used to have model railroads when they were kids. Some clients want the lay outs as memorabilia, some are grandparents who want the setups for their grandchildren. “Some of my clients have grey hair or no hair. A lot are in their sixties and older who grew up with Lionel trains under the Christmas tree,” John says. A typical call will be from a retiree who wants to build a train layout. “It’s based on nostalgia,” he says, “often where they lived when they were growing up. They want to replicate their old neighborhood and I have to get a feel for where they lived and which railroads went through. It’s a challenge.” He has a reference library in his office with books, maps, catalogs, resource guides and pictorial histories, and he often searches for city plans and old photographs and studies the architecture of the time. Right now he’s working on a project for a customer who lives in New Hampshire. “He asked me to create scenery for his Swiss mountain HO scale railway. I enjoy challenges and this project has been a lot of fun to work on.” He uses Sculptamold and white acrylic paint to create snow. He has numerous clients on Long Island, since he lived there for many years, who want Long Island Railroad or other regional railroad setups.

His facebook page features a pre- 1935 image that he says shows “a significant LIRR junction in Garden City facing west; in the background is the Garden City Cathedral. Today, more than 80 per cent of this junction has vanished. The space is mainly a parking lot for surrounding office buildings.” In another LIRR scene, “the mid-day Oyster Bay Branch train glides in on the westbound track about to cross Main Street in downtown Mineola,” as seen from the Nassau Tower in about 1970. John says, “I rode on these 1950s-era passenger cars many times. Most of them were retired in the late 1970s but quite a few of them survive on tourist railroads today.”

The train tracks he builds run through dioramas he creates of surrounding landscapes or city scenes that often tell a story. In one, people waiting for a train at a railroad station watch as workmen replace a broken window in a building across the street. In another, a railroad track runs through a Vermont covered bridge. “I positioned it for the owner to allow his family or friends to peer through the bridge and view the other side.”

One of his very local clients is the Hildene Museum gift shop where he maintains and repairs the model railroad that is suspended from the ceiling and runs around the shop’s square footage. Clark Dunham from Pottersville, New York, who was a Broadway set designer, created it about nine years ago. John designed, built and maintains the model railroad in the Children’s Department at the Northshire Bookstore’s Saratoga Springs store. Northshire owner Chris Morrow says that John introduced himself when the Morrows were designing the Saratoga store. “I knew I wanted something interesting to give the kids’ section a ‘Wow’ factor,” Chris says. “Once I decided on a train set, I contacted him. We dis- cussed options and he designed it. He’s there once or twice a year for maintenance.” Chris describes John Schaub as “a nice guy who’s easy to work with.” And the model railroad at the bookstore is certainly a Wow! 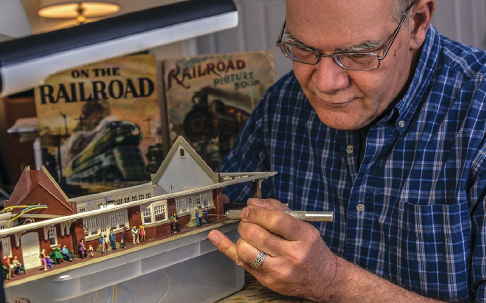 Schaub often creates historically-researched dioramas depicting the architecture of the time
when the train upon which the model is based was actually running.

As with many people, John got into his present business in a roundabout way. He was a film student in the mid-1970s and went to Los Angeles for a visit. A friend knew the modelmakers at Warner Brothers. “We took a studio tour and were allowed to go inside the art department. There I saw prop builders and model makers—the creative process—at work.” They also went to Universal Studios. “Seeing the back lot in person versus a composed image through the lens of a motion picture camera…helped me understand how to build a layout and create the magic—the illusion. That’s really how I got started. I learned that in movie model making what you think is real is not, and you can translate that to making model railroads.”

He began to sell trains and setups at model railroad shows. “I ended up walking into the job and it started from there. I was approached in 1994 at a show by someone who asked me to build him a model railroad setup in his large, empty basement.” Most of his work is in HO scale (3.5mm=1 foot). “With HO you can create a very realistic scene and that’s an emerging part of the industry,” he says. “I still do a lot in Lionel O gauge (1/4 inch=1 foot) but you need a large area for this size toy train.”

Tools That Fit the Job

John has two large work tables and keeps all of his materials and tools, meticulously organized and stored by subject and manufacturer, in his downstairs workshop: boxes of tracks, trains and diorama materials; plastic, paper and balsa wood, weights and squares for making model buildings; razor saws for cutting wood and plastic; sets of very small drills, scale rulers, and files. Upstairs in his office he stores materials and equipment for detail work: paints, adhesives, clamps, fillers, synthetic paintbrushes—some of only a hair’s-width. Trays hold pins and clips, Xacto knives, tiny drills, files and different kinds of tape. Because so many of his jobs are to repair existing layouts, he has a complete set of tools and materials that will fit in his pickup truck and are ready to go at a moment’s notice: boxes with pieces for broken trains, HO scale wheel sets and couplers for freight cars, an art box with paints, brushes and a scenery box. All electrical equipment is together—drills, tapes, wire tools, light bulbs—and a dedicated box for decal work. “I’m one of the few people in the country who does decals and lettering,” he says, all on scale models. He recently completed a job for a model railroad group in northern Vermont, applying identification decals to a string of O-scale model hopper cars that are used at the wood chip power plant in Burlington. He says he gets his materials everywhere: “Hobby shops, the internet, train shows, collections from my neighbors, art supply shops, Home Depot, my local lumber company and my back yard. I find a lot of materials in common places and in the most unusual places, too.”

“Model railroading is an art form. Imagination is my motivation to create scenes from the ‘mind’s eye’ translated to the table top.”

John says that when he was growing up his family came to New England for vacations. “I’ve wanted to live in Vermont since I was five.” He moved to Bellows Falls in 2000, where he lived in the Exner Building for artists and in a Rockingham Area Community Land Trust Building, working on photography. He discovered Steamtown in 1970, a collection of steam locomotives exhibited just north of Bellows Falls, which is long gone. He also worked for the Green Mountain Railroad Corporation on the Green Mountain Flyer that ran between Bellows Falls and Chester in the summer, as a passenger trainman and narrator. Then 9/11 happened, and he moved back to Long Island to be with family. There he continued working with his family in their custom black and white photolab. At that time he began setting up exhibits for historical societies in Queens and Nassau counties and special interest railroad groups. “During this time period the model railroad business became larger and larger,” and he mainly retired from photo work.

After many years of moving back and forth between Vermont and Long Island, he says, “I missed living in Vermont and…settled in Arlington in mid-2011.” He seems happy here and happy with his work. He says, “Model railroading is an art form. Imagination is my motivation to create scenes from the ‘mind’s eye’ translated to the table top.” ◊

Louise Jones is a senior writer for Stratton Magazine.