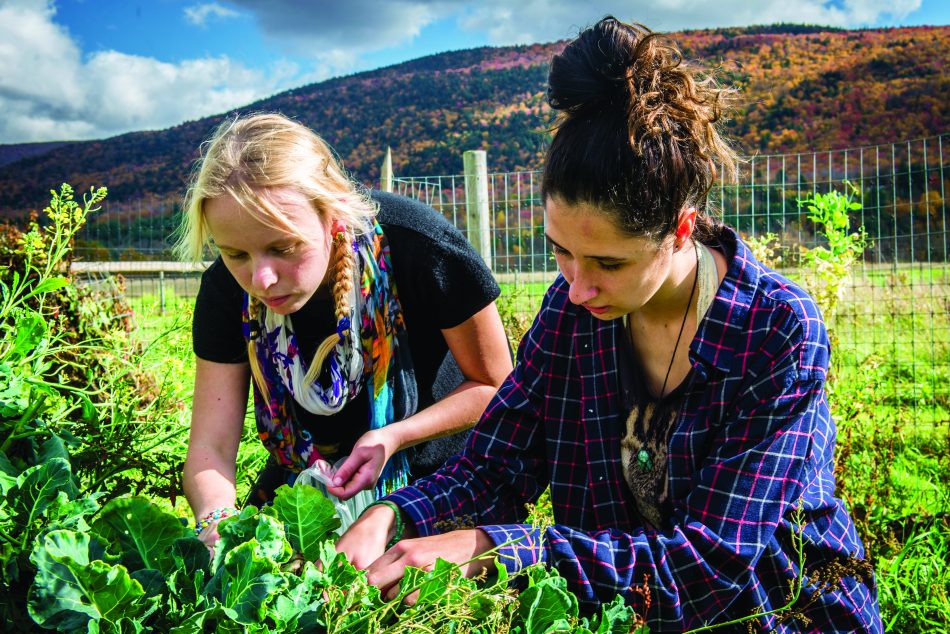 The Vermont Community Foundation Brings a New Focus to the Region

Even though it has been helping good things happen all over this state since 1986, the Vermont Community Foundation has never had a full-time representative in the Manchester and the Mountains region—until now.

Guided by a search committee of local residents, this past autumn the foundation brought on a senior philanthropic advisor for Bennington County named Elisabeth Marx (see the accompanying short article) with an impressive resume and a lifelong connection to this part of Vermont. Says Marx, who works from her home office in Manchester, “I love being the person who connects people: those who want to do good philanthropically, and those who are out there toiling on these difficult issues—arts, the economy, the environment—and they have dreams, if they could find the ‘venture capital’ to make it happen.”

But wait. What is a community foundation? And what will it mean that this one, the largest grantmaking charity born and raised in Vermont, is building a bigger presence and a stronger impact here?

In some ways, a community foundation is similar to a venture capital company. People work with a venture capital firm if they have money they’re ready to invest, and the firm directs it into promising business startups. The parallel that can be drawn is that a community foundation stewards charitable capital, putting it to work where it is going to have the most impact.

Here’s the difference: instead of placing investors’ capital into business startups with the goal of making a profit, a community foundation helps donors find and fund nonprofit organizations, in the form of grants, with the goal of doing good for the community in their areas of interest. Almost 700 community foundations are at work in all parts of the United States, serving cities, counties, regions, or states.

“Community foundations are best known for being aggregators of donor-advised funds,” says Manchester attorney Peter Kinder, whose home is in East Dorset and who sits on the Community Foundation’s Board of Directors. Vermont is small, but its generosity is outsized: The foundation, a statewide organization based in Middlebury, coordinates and provides services to hundreds of donor-advised funds and nonprofit funds.

In 2015, through its funds, the Community Foundation gave out $16.7 million in grants in Vermont and beyond, to nonprofits and community organizations working in health care, education, the arts, youth and family services, economic development, social issues, farming and food systems, land conservation, and more. As part of its efforts in Bennington County, an advisory group of community leaders will work with Elisabeth Marx to develop and manage a regional grant-making fund, built from contributions by local residents both full and part time.

“I’ve been involved with the Community Foundation for more than 20 years, and I have a donor-advised fund there,” says Lyman Orton of Manchester Center, the co-proprietor with his three sons of The Vermont Country Store. “Some people would like to set up funds and have them fairly narrowly defined—they know what they want their fund to support. Some want the foundation to handle the whole thing for them. Others, like me, want to be more engaged, with the foundation there for advice and guidance and helping sort things out. “New people who come in love to
get involved—and we want them to get involved,” Orton declares. “That’s what it’s all about!” 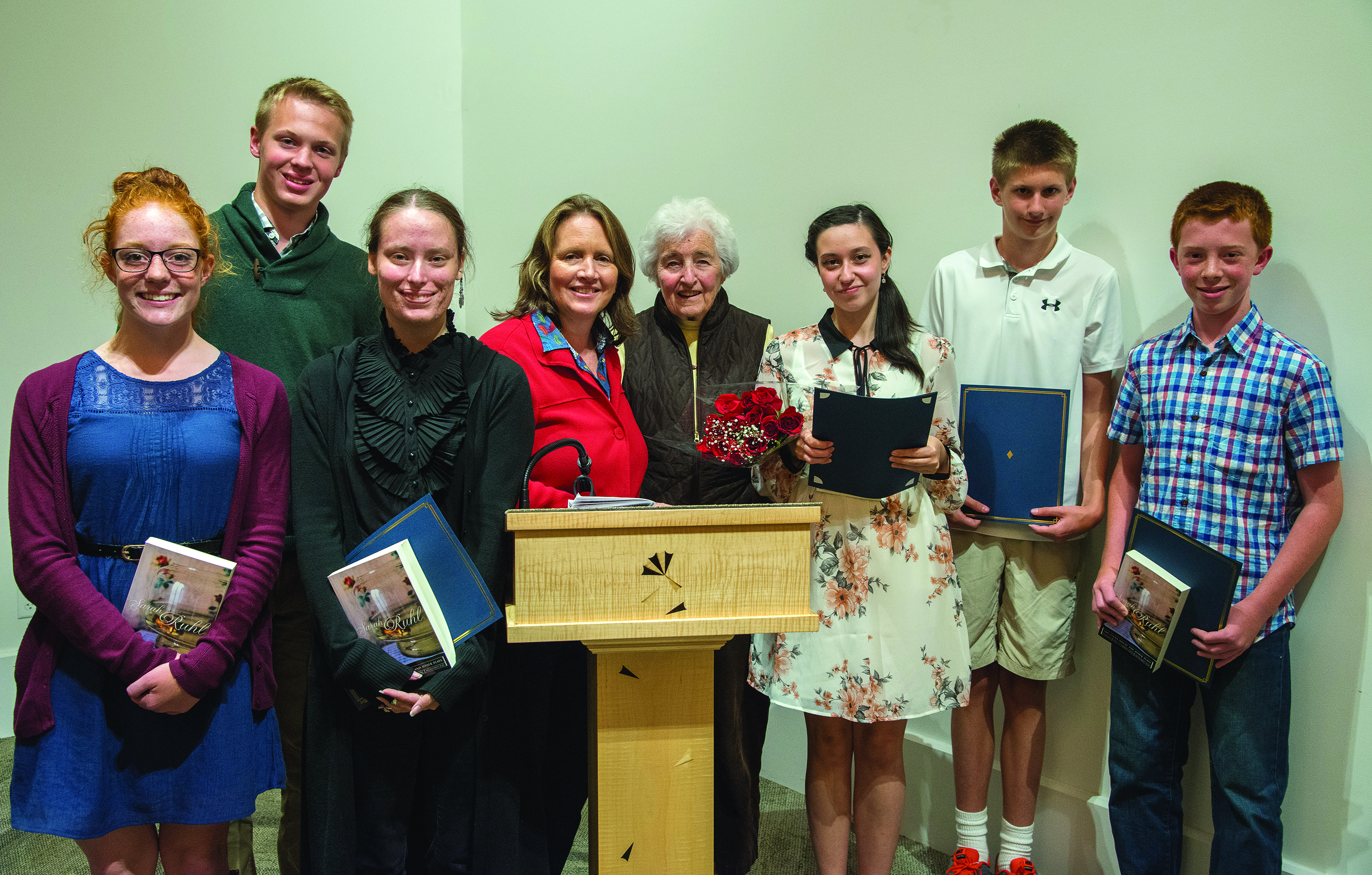 What will success look like, for the Vermont Community Foundation in this region?

Here are a few examples of recent positive impacts: 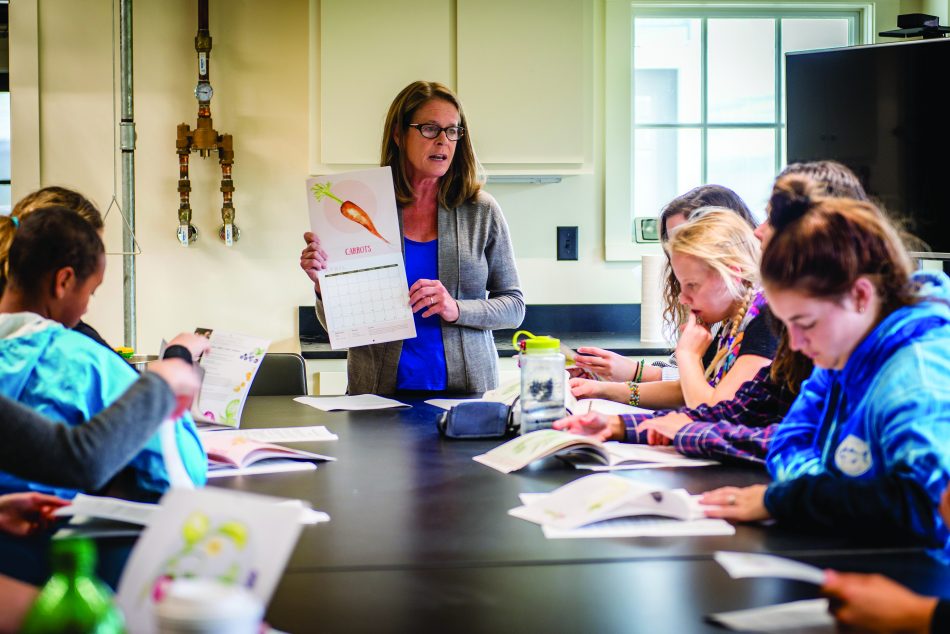 Liz Ruffa shares information about VT Harvest of the Month, a program developed with assistance of
Vermont Community Foundations’s Farm and Food Initiative, with students at
Hildene-Burr and Burton Academy’s Dene Farm.

What’s exciting about the Vermont Community Foundation building a stronger impact in this area—and what should be its biggest priorities?

“One challenge is the economic base. There’s a poverty issue that’s been denied in the past, but it has ramifications for all of us,” observes Martha Heilemann of Manchester, who was recently director of philanthropy at Long Trail School in Dorset. “Also, obviously we’re having a severe problem with astronomically increasing use of drugs, which is impacting all across the strata. That’s a piece that is being looked at by many organizations; I think it’s important for the foundation to be involved in that dialogue, to help coordinate the people and groups that are talking.

“There are a lot of solutions out there,” she adds, “but let’s try to work together.”

Historically in this area, among other issues, the Community Foundation has made grants to support land conservation, the farm-to-plate movement, outdoor recreation and education, and the arts, notes Manchester attorney Rob Woolmington, a former foundation board chair who lives in Bennington. “There’s a really strong arts community all over the county, and I hope they’ll continue to support that.” He also sees a need to fund innovative literacy programs and to battle the drug problem that is statewide. “What the Vermont Community Foundation can do,” he says, “is develop and match resources—develop more sources of funding and try to get them in the right place.

“There are certainly resources here,” Woolmington adds. “People are interested in giving, and the foundation can help them find the ways to do that.”

“Having a representative here who can really speak to people in the county, understand the needs of Southern Vermont, and build coalitions and collaborations—I’m really excited about that,” says Betsy Rathbun-Gunn of Sandgate, director of early childhood services at the United Counseling Service of Bennington County.

“This model of a regional advisor is working well in other parts of the state, and so often, Southern Vermont feels like we’ve been overlooked,” observes P.J. Venti of Bennington, who has done development work for regional nonprofits for 25 years and currently works for Williams College. “The Community Foundation is a great resource for small nonprofits. They can provide investment management services and they can administer your endowment and your planned giving, things you may not be able to do on your own.”

What about someone who would like to get started in philanthropy? The recent experience of one local couple shows how the Community Foundation can make the process work smoothly.

The couple, both retired, are passionate about supporting the performing arts, health care, and education. “We had been wanting for years to set up a fund that could make grants to organizations—and we thought this might be the time,” one of them says. So last year, they worked with the Community Foundation to create a donor-advised fund. Like many donors, they choose to remain anonymous.

“I could have probably figured out how to do it,” the donor says, “but they made it extremely easy.”

The foundation invests the money placed in its funds, taking care of the bookkeeping, accounting, and tax reporting. It provides donors with information and guidance about issues, community trends, and nonprofits in the state. It points out gaps where philanthropy could make a big difference; it makes sure that nonprofits applying for grants are legitimate 501(c)(3) organizations; and it reports to donors on what their grants have achieved.

“We’ve already given out four grants this year,” the donor says. “It’s not only easy to start a fund, it’s very easy to make grants.

“They take care of it, and our paperwork was ridiculously minimal,” she concludes. “They know what to do. It’s what they do!” 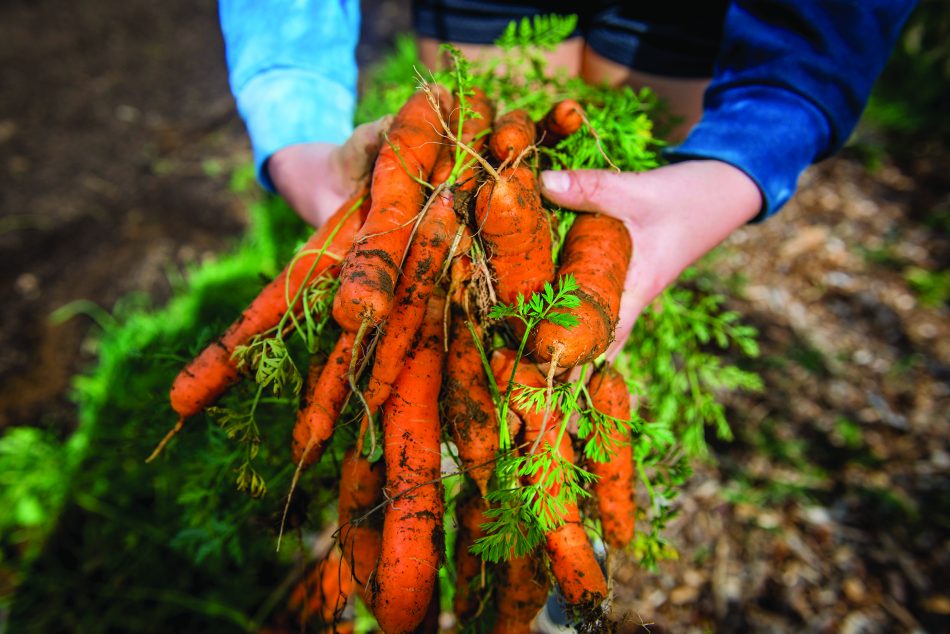 Deeply Engaged In The Community 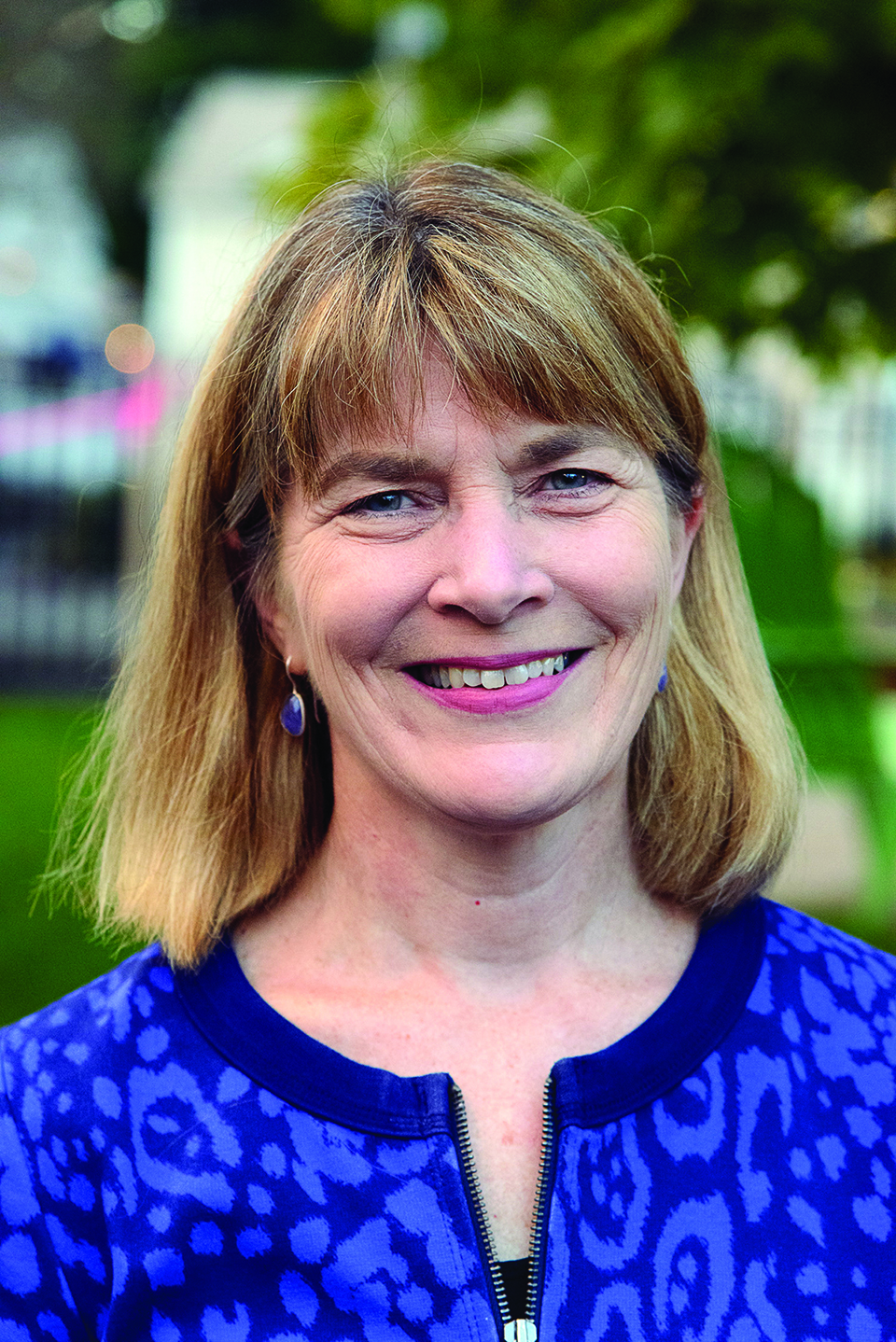 “My children learned to walk here; I have deep roots here,” says Elisabeth Marx, the Vermont Community Foundation’s new philanthropic advisor for Bennington County. “I’m like a lot of people, whose heart has been here for as long as I can remember.”

Throughout Marx’s childhood, her parents brought their family to this area several times a year. They now live in Mount Holly, while Marx lives in Manchester with her family—and she has lots of reasons to immerse herself in helping make this region stronger.

“I see a lot of really talented people, exceptional natural beauty, arts organizations, opportunities for outdoor recreation. It really is a vibrant place,” she says. “And I think a community foundation is effective when it is deeply engaged in the community, connected to the pulse of what’s going on.”

Most recently the senior director for strategic collaborations for the United Way of Dane County, Wisconsin, Marx has spent her career working for nonprofits and foundations. As the Community Foundation’s representative, she’ll need to get to know local philanthropists, potential donors, community leaders, and nonprofits as she works to build a regional fund, along with a diverse network of collaboration and support.

“I think the Community Foundation is positioned to take people who have deep, multigenerational knowledge of this community, as well as those who’ve come here because they want to be here, and bring them together,” she says. “Philanthropy can help support the change that people want to see. One of the beauties of a community foundation is its ability to have a long-term vision. Where do we want to be in 10 years, in 50 years? I believe that all of us can have a role in that.”

Giving Where You Care: A Guide to Holiday Generosity

’Tis the season when many of us make an extra effort to support favorite charities and causes. The Vermont Community Foundation offers this advice for charitable giving: