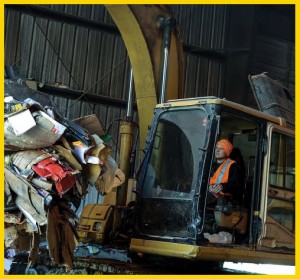 To borrow a phrase coined during the first major gold rush in the United States, “there’s gold in them thar hills!” Only the hills aren’t those of Georgia, but rather the Green Mountains of Vermont. The ‘gold’ is garbage. And the industry is waste management, not mining. Below are the stories of three successful, and unique businesses in our neck of the woods that are blazing the recycling trail and transforming trash to treasure.

Meet Trevor Mance, owner of TAM Waste Management, Shaftsbury, aka “Your Home Town Hauler.” Mance started his company in 1996 while only a senior in high school. With a beat-up, one-ton pickup and a 70-stop route, TAM was born. “We grew the business organically with flyers I delivered on my moped and folks I’d gotten to know while working at the dump,” says Mance. “As they got tired of going to the dump, we gained customers.”

Soon, 70 stops grew to 700, and Mance was pursuing a degree at Siena College while remaining TAM’s lone employee. “I did have a garbage truck by that point,” he laughs. Mance would pick up the Pownal route, drop off at the incinerator in Hudson Falls, NY, and head down the Northway to his favorite fast food restaurant, where he could eat and change clothes before driving to Siena. Then he would pick up another route on the way home. After a few years of sleep deprivation and a couple of shoulder injuries, TAM had grown enough to add employees.

Today Mance has a staff of 26. “I’m really blessed with awesome people who joined early on and have stayed with me,” he says. “Our customer relationships are what we pride ourselves on. It is super-important to me that we have a respectable person with high ethical standards and good driving skills showing up in your driveway…so we spend a lot of time training each driver on all the little intricacies of each customer. We have a great group of people and a great culture…we never want to become a commodity.” 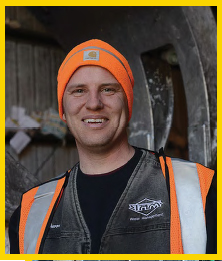 TAM offers ‘No-Sort Recycling’ or single-stream recycling. Essentially, that means the homeowner or business doesn’t have to sort recyclables—all fibers, glass, plastic and tin can be thrown in the recycling bin together. TAM drops the recycled material at an Albany, NY, plant that has the technology to sort and re-sell the materials.

And for the skeptics out there—no, the trash and recyclables are NOT mixed together after pickup and taken to the landfill. “First, there’s a financial argument that refutes that myth,” emphasizes Mance. “Recyclable material produces revenue, while garbage going to the landfill is a large expense. Why would anyone want to turn revenue into expense? The other reality is that TAM is very driven to do what’s good for the environment.”

In 2007, Mance built a new transfer station in Shaftsbury. Five years later, he’s handling material from 20 towns in addition to his own routes. “We’re getting to the size that we could have a recycling facility of our own,” he says. “My goal is to take a waste product, figure out how to recycle it, and find a market for it rather than throwing it away—asphalt shingles into road product, cement block into aggregate, wood into fuel bricks. I would love to see 80 percent of our waste recycled or diverted…and I’d like to squeeze any value out of the remaining 20 percent before it’s landfilled.”

Meanwhile, Mance is also looking seriously at composting. “For every five-gallon bucket of food waste you divert from the landfill to composting, you eliminate greenhouse emissions equivalent to burning one gallon of fuel,” claims Mance. “When food waste goes into a landfill, it creates methane gas in the absence of oxygen. But when you compost, you add oxygen, so this emits carbon dioxide instead.”

To put that into perspective, with just the four accounts Mance has initiated composting with to-date, TAM is diverting 3,000 pounds of food waste per week from landfills. Right now, they’ve contracted with two other companies to compost the waste. Soon, however, Mance will be composting it himself. “We’ve just entered into an agreement to build a new composting facility at the Bennington Transfer Station…we’re currently in the permitting phase and expect to be up and running by mid-summer 2013.”

Initially, Mance is shooting for two markets: a high-end, organic compost product for flower and vegetable growers; and an amended top soil that can be sold in bulk to contractors, as well as nurseries and other retailers that will bag the product for resale to the residential market. “This is the next frontier in garbage,” says Mance. 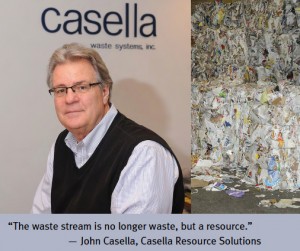 Squeezing value out of waste is a goal that is shared by our second business profile, Casella Resource Solutions. “The waste stream is no longer waste, but a resource,” says John Casella, chairman and CEO. “And the resource stream will either be used for its manufacturing feedstock value, for its energy value or for its nutrient value.”

Headquartered in Rutland, Casella was started in 1975 by John’s brother, Doug, and one truck. Today, it is a $500 million public company with operations throughout the Northeast that are involved in Zero-Sort recycling, collection, organics, energy, biofuels and landfills.

Casella has 17 recycling facilities in total, five of which are Zero-Sort, the company’s brand name for single bin recycling service. The most recent to come on line is in Rutland, where Casella invested $3.5 million last year to retrofit its dual-stream facility (where customers had to separate recyclables into two containers for fibers and bottles/cans) to Zero-Sort.

Here’s a simplified version of how it works. For the homeowner, it’s easy. Throw all recyclables into an 18-gallon bin. Take it to your garage and empty it into a 95-gallon tote, which can be easily wheeled to the curb (or wherever you want) for pickup. Casella empties your totes into a split-body truck, which has one compartment for trash and one for recyclables. “If we can go by your house to pick up both trash and recyclables with one truck vs. two different trucks, we’ve just reduced cost and carbon footprint,” says Casella, who notes that the split-body is the only truck model they’re buying today.

Once the driver tips the recyclables at the Zero-Sort facility, the material begins its journey through a maze of screens, discs, magnets and more. First, it moves through a screen that breaks and removes glass bottles and jars. Rotating discs then push the cardboard over the top, while the smaller material falls below. Smaller disc screens separate paper. An eddy current creates a reverse magnetic field that repels aluminum cans, while a magnet picks out tin cans. Optical sorting technology separates plastics into different types. And voilà, bales of separated materials appear at the end of the line, which are then sold on the commodity market and manufactured into new products.

“With Zero-Sort, we’ve increased participation by the homeowner by making recycling easier and more convenient,” says Casella. “We’ve increased recycling yield by right-sizing the containers and keeping recyclables out of the trash. And we’ve been able to help municipalities increase recycling rates from 10 to 40 percent, and are actually sharing with towns the resulting revenues over certain threshold levels.” Before converting to Zero-Sort, the Rutland facility was handling 10,000 tons per year of recyclables. In less than a year with the new technology, that figure has jumped to 30,000 tons per year and is on its way to 60,000 tons per year, according to Casella.

“Over the past decade, our vision for this company has evolved from the consumption/disposal model to the processing/sustainability model, where real value can be created,” says Casella. “The real challenge is marrying what is economically feasible to what is environmentally beneficial. Nothing is sustainable unless the economic model works.”

Beyond Zero-Sort Recycling, Casella Organics is another example of that vision. The largest organic processing company in the Northeast, Casella Organics handles 700,000 tons of organics—biosolids from municipal sewage treatment sludge, short paper fiber from paper mills, ash from wood-fired incinerators and more. The company has built an anaerobic digester that takes manure from a 300-head dairy farm, as well as organics from food processing companies, to create organic fertilizers and home-grown energy for the grid. “We plan to build three more digesters, but still have a year or so of development work to make sure the model works from an economic standpoint.”

Organics is where single-stream recycling was ten years ago, according to Casella, and is just beginning to make its way to the forefront. “Organics will be the next category of waste to be removed from the stream and converted into a resource,” he adds. “So with single-stream representing about 40 percent of the waste stream and organics at about 20 percent, you’re now talking about 60 percent of the waste stream being used for its resource value as opposed to disposal.” By any measure, that’s significant change. 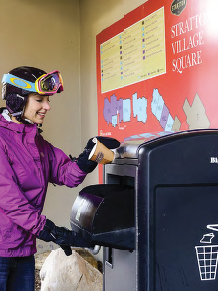 Enabling waste haulers to more efficiently collect trash and recyclables is the role of our third business profile, BigBelly Solar. Made in America at Mack Molding Company in Arlington, the BigBelly Solar trash compactor is about the size of a USPS mailbox and—because it compacts— holds 160 gallons of waste, as much as five municipal trash cans. It can displace four out of five trash pick-ups, dramatically reducing transportation and labor costs, as well as greenhouse gas emissions. It gets 100 percent of its energy from the sun, and uses wireless technology to alert sanitation workers when it’s full, limiting unnecessary collections. This aspect is particularly significant when you consider that garbage trucks burn over a billion gallons of diesel each year throughout the U.S., costing cities and towns more than $50 billion.

The newest offering, the SmartBelly, is similar to the BigBelly in every way except it doesn’t compact. It is self-powered by solar energy and reports when it’s full. Trash, single-and multi-stream recycling, and organics options are all available. There is also a compacting recycler to manage single-stream recycling in high-volume locations.

BigBelly Solar partnered with Mack early on as its development partner, plastics molder and contract manufacturer. Mack injection molds the solar bubble or dome that protects the solar photovoltaic panels. It also fabricates the back panel and door out of metal. Mack buys nearly 160 unique parts for the compactor and recycler, and totally assembles both products for direct shipment to BigBelly’s customers, which are dotted throughout the U.S. and in some 30 other countries.

For its work on the BigBelly system, Mack was awarded the Vermont Governor’s Award for Environmental Excellence and Pollution Prevention. When recommending Mack for the award, BigBelly’s Chris Summersgill, vice president of operations and manufacturing, said he was “confident that our success is related to the breadth of capability at Mack…I’m also convinced that there are only a small handful of molders that could have made the solar bubble at all. Equally impressive is the production line…that reliably and repeatedly produces high quality machines.”

A far cry from the garbage industry of old, trash collection today is evolving into an environmental opportunity for city, university, park system and corporate leaders to reduce their carbon footprint while simultaneously cutting costs.

Vermont is justifiably proud of its environmental ethic. It was the first state to ban billboards and a pioneer of what are called “bottle bills.” Every year, Vermonters turn out in the thousands on the first Saturday of May— Greenup Day—to clean up the state’s roads and highways. Until now, the collected debris has represented nothing much more than garbage to be sent off to the landfills. Now, new technologies and innovative businesses, like the ones described here, have moved the state forward again and what was once mere waste is now a resource to be recycled and reused for manufacturing, energy and improved agriculture. These businesses profit and so do we all.

Julie Horst is a writer who lives with her husband and two children on a 300-acre Christmas tree farm in Bennington.