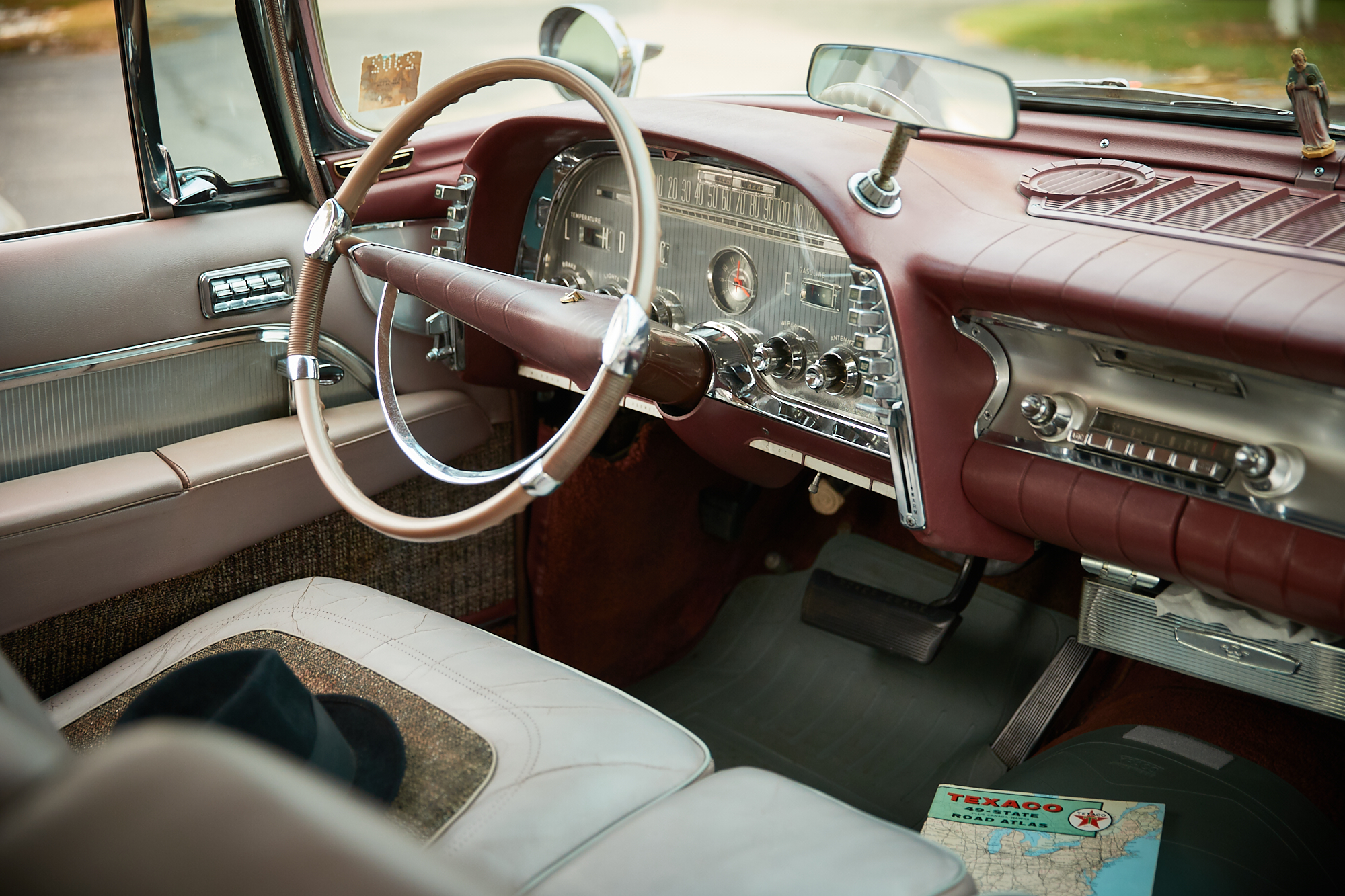 Throughout Southern Vermont, a growing number of classic car collectors come together at local events to socialize, trade stories, and celebrate their love for their timeless vehicles. Some are avid mechanics; some are passionate experts with encyclopedic knowledge of automobile history; and some of them just love to put the top down, head out on the open road, and let the good times roll.

From racecars and roadsters to wide framed cruisers, untold hidden treasures lie tucked away in the garages and barns of Vermont’s beautiful small towns. When the summer sun is high in the mountain sky, Vermont’s classic car scene comes alive with vintage American and European cars turning heads as they turn corners, catching the eyes of onlookers as they scintillate in the Green Mountain sunlight.

Some classic car enthusiasts love to get under the hood and take matters into their own hands. Joe Gervais is an East Arlington resident with a passion for mechanics, who has spent over a decade working on his “Resto-Mod” (restored and modified) 1961 Corvette, complete with modern power train, modern suspension, and redone interior and paint. Joe comes from a dynasty of savvy car experts, starting with his Great-grandfather, who modified early truck models to better suit the needs of his moving business.

Several generations later, Joe has continued the family tradition of home auto repair and modification. He has been proficient in advanced automotive maintenance since he was a young teen. He explains, “The family car broke down and my father told me, ‘Son, I trust you. Change the clutch for me.” Joe considers that moment as one of the catalysts that inspired his current auto restoration endeavors.

When Joe acquired his ‘61 Corvette from the father of one of his college friends, he took on the task of restoring it with ambitious vigor. Joe started the restoration process by working on the engine until it was reliable. Afterward, he decided that he needed to replace the suspension. While driving it early-on in the restoration process, Joe found that “The handling was just terrible. Before ’62, part of the Corvette suspension was similar to their early ‘50s Chevy trucks. It just didn’t handle well for today’s roads.” Luckily, Joe met a car builder out in California who was modifying early Corvette frames to accommodate late Corvette suspensions, who helped Joe with the project. After the frame was modified, Joe replaced the old suspension with a modern 1990s Corvette suspension. After Joe finished the mechanical work, he finished the body and paintwork, giving the car a refurbished interior in the style of a 1961 Corvette model, but with the light saddle color of a 1971 model.

Joe’s advice to other aspiring car collectors and restorative mechanics is to take things one step at a time and to enjoy the process as it unfolds. His classic American Chevrolet sports car might bend corners at breakneck speeds, but Joe intentionally paced out the restoration process to make the most of the experience. When discussing his restoration process, he says, “It would have been nice to just start from the beginning, do the whole thing, and be done; but by taking it in phases, you get to enjoy it along the way, and you get to the end with something that you can really be proud of.” For Joe, much of the payoff may be in the process itself, but he still loves to take his Corvette out for a spin on Vermont’s scenic back roads, which he praises for their tight turns, straightaway sections, and dynamic elevation changes.

Often, collectors specialize in specific makes and models of classic cars – and have extensive knowledge of their favorite automotive brands and niches. One such collector (who requested anonymity) has an incredible lineup of 1970s Porsches, each with their own unique features.

The 1974 Carrera 2.7 is light, nimble, and powerful. The owner describes the visceral experience of driving it. He feels connected to this beautifully powerful machine and states that he can “feel everything.” He explains, “I feel the road. The car’s really loud and the engine’s right behind me. It doesn’t feel like driving a front-engine car, because all of the weight is behind me. You have to learn how to drive them differently. You have to go through corners differently.”

With no power brakes or power steering on the 1974 Carrera, the learning curve is steep. Each one of this enthusiastic collector’s Porsches has its own unique set of mechanical characteristics. The collector’s 1976 Porsche 930 is a top-of-the-line 911 model from the first year that Porsche introduced turbo engine 911s to the United States’ market. When recounting the history of this classic European sports car in vivid detail, he explains that the 1976 930 Porsches “destroyed the field in terms of racing. There was nothing that could compete with those things back in the day because nobody had taken turbo charging to that level.”

This expert cautions that the turbo lag of the engine makes the 1976 930 difficult to control and gives a feeling of unbridled raw energy to the driver, who must exercise caution, especially when driving around corners. The 1977 Porsche Carrera 3.0 lacks the turbo capabilities of the 1976 930, but stands out from the others with its wider frame and larger engine. According to the collector, the 1977 Carrera 3.0 “has a great driving characteristic. It’s got a wide body. It looks like a ’74 IROC race car. It probably turns more heads than the other two Porsches I have. People just love this car. Everywhere I take it, people get excited about it.” The collector loves to drive around Vermont on day trips with other collector friends – and has made a number of social connections in the Vermont classic car community. When asked about his favorite roads for driving in the Green Mountain State, he recommends going up Route 30, north through Dorset to the Mettowee Valley, then past Rutland and beyond Lake Bomoseen. “Those driving roads are really fun,” he says. 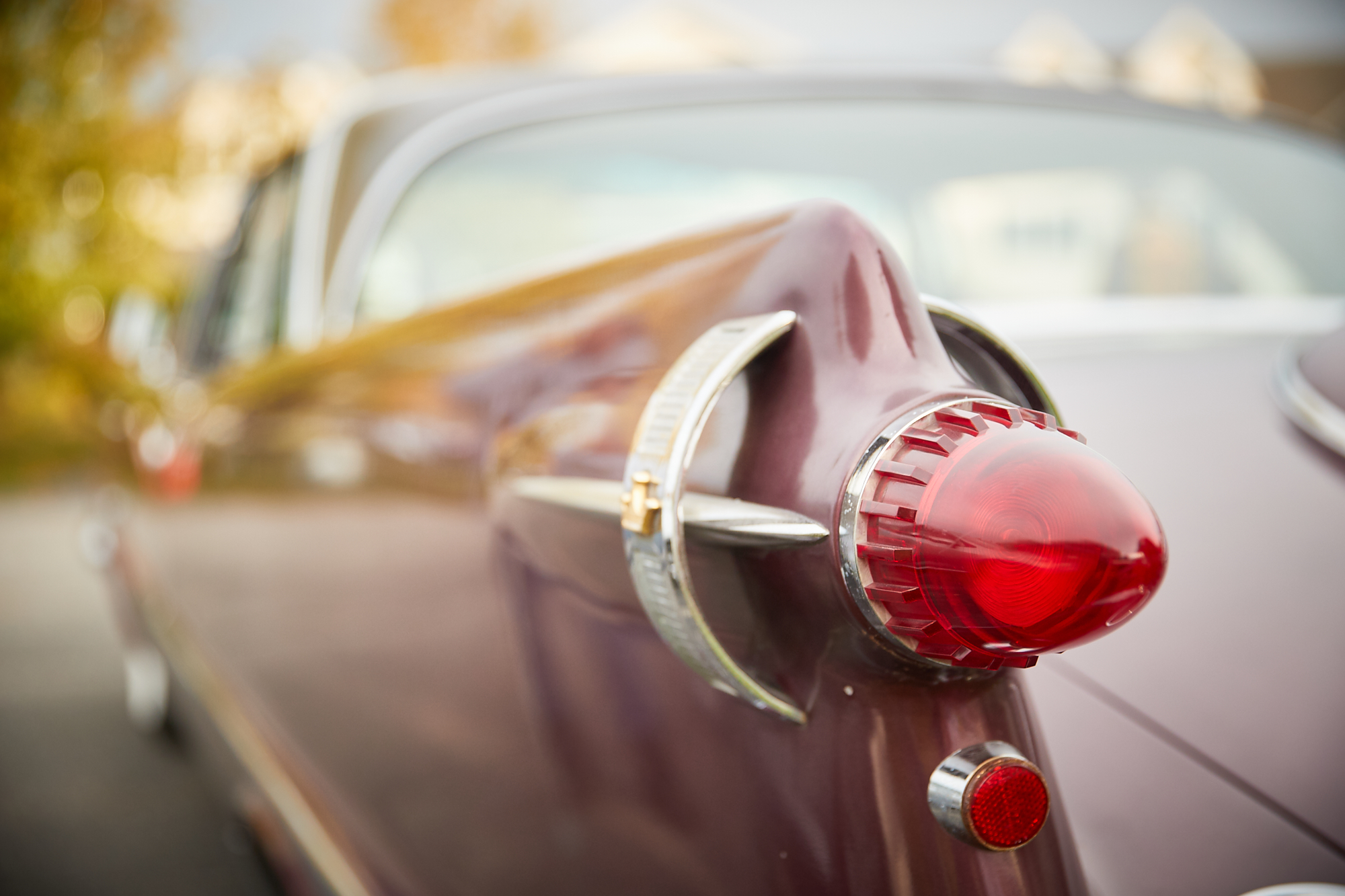 Some classic cars are sleek and aerodynamic racing machines with chiseled contours and curves, which appeal to the aesthetic and mechanical preferences of high-octane racing warriors with a need for speed. Others opt for larger American cruiser models, such as Manchester collector Matt Weir, who loves to take his 1962 Cadillac Series 62 Convertible out for a relaxing ride on the roads around Manchester and Londonderry. The Cadillac is massive and majestic at 18.3 feet long. Matt describes it as “longer than a Chevy Suburban”. Matt likes to savor his driving experience, taking his family out for trips for ice cream in Southern Vermont in his classic convertible that he says “ambles down the road like a boat on a lake”. For Matt, the best part about driving a car in Vermont is that “you don’t need to go fast. You can just take it slow and enjoy all the natural beauty that the state has to offer.” 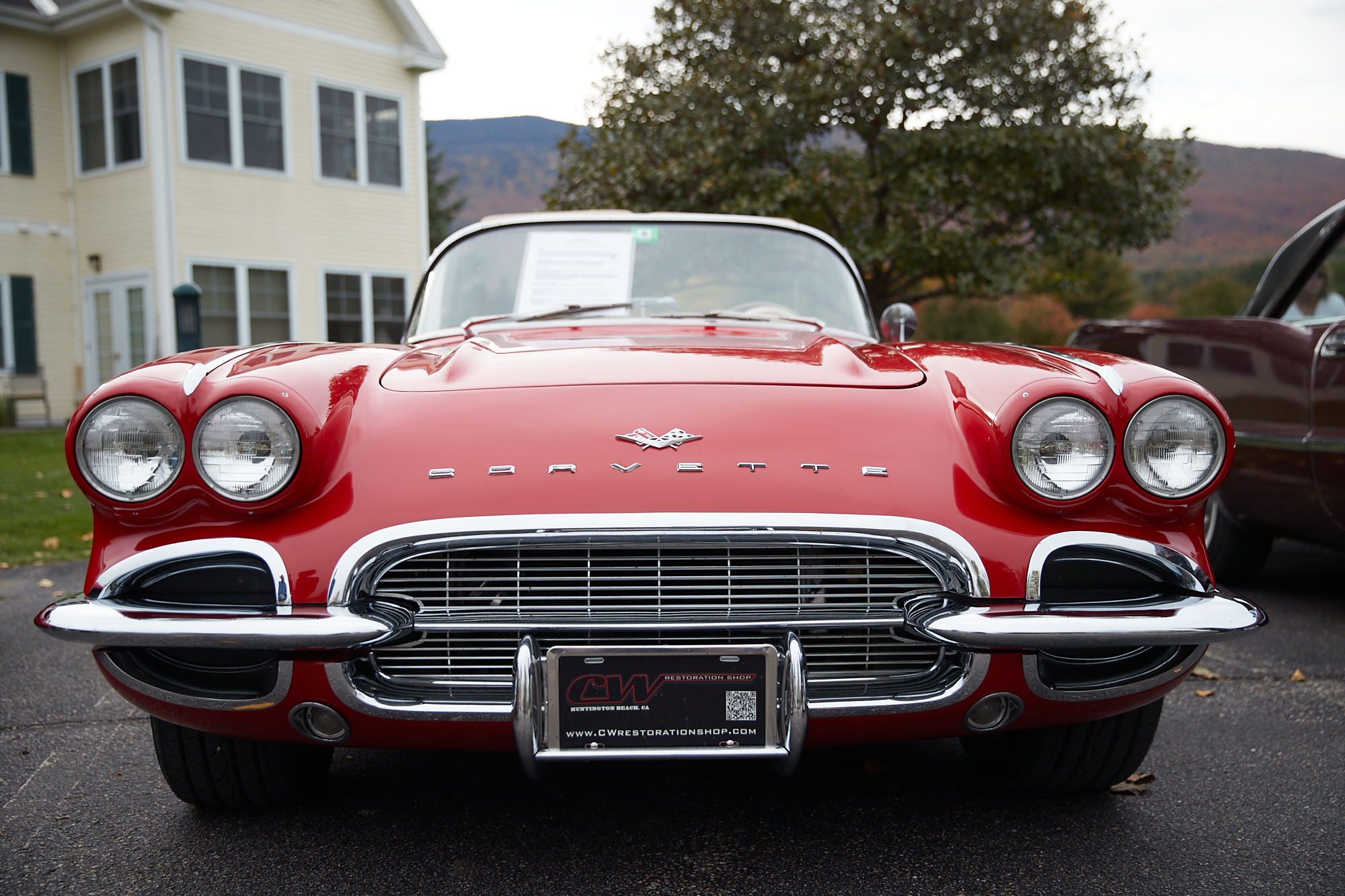 Rutland classic car collector Lou Beauchain’s 1959 Imperial Crown Southampton is an example of 1950s American aesthetic automotive engineering at its finest. With all original paint, body, interior, and engine, the car is exactly the same as when it left the assembly line over 60 years ago. Apart from the tires, brake pads, and routine maintenance, nothing has been replaced or modified. The swiveling seats, the dashboard rearview mirror, the push-button transmission, and the ribbon speedometer are some of the unique aspects of the car that made Lou fall in love with it when he first laid eyes on it. According to Lou, he “came over the hill and saw it parked in the driveway – and it was love at first sight.”

Lou describes the Vermont classic car community as friendly and welcoming. Prior to purchasing his own classic car, Lou’s friends invited him to ride in their car while they drove in the Stowe car parade. That was when he knew that he wanted to be part of the classic car community. The first year after he bought the Imperial, he “went up to Stowe, and [he] got to drive in the parade with [his] family. It was just wonderful driving down the street as everybody cheered. It was a great time.”

Events in Southern Vermont such as the summer “Cruise-In” shows at Hemming’s Motor Shop in Bennington and the Mount Equinox Hill Climb (presented by The Vintage Sports Car Club of America), have traditionally provided opportunities for members of Vermont’s classic car community to come together. From mechanically- minded restoration experts and knowledgeable niche aficionados to more casual car collectors, the Vermont classic car community is open and accepting to anyone interested in automotive craftsmanship. While all collectors have their own personal preferences, there is one thing they all agree on: The magnificent panoramic views of the roads and byways of The Green Mountain State provide the perfect scenic backdrop for an awe-inspiring drive.