It’s a rainy, foggy day, and Josh and Jamie Wylie are stuck inside. “We went through the list of things we’d love to do,” Josh says, “but the weather is bad, so we’re just sitting watching TV, which is something we’re not good at.” Jamie adds, with a laugh, “Even our dog is sitting here staring at us, saying ‘let’s go outside.’”

The Wylies, a young couple living just a long run from Stratton Mountain, love Vermont for its great outdoors. Their wish-we-could-do list is a long one: cross-country skiing, spinning, golfing, hiking, kayaking, paddle boarding, duck hunting, and of course, downhill skiing and snowboarding. Mountain biking is a serious passion for Josh (he has a fat bike for winter and mud riding, too), but it’s something of a sore subject for Jamie.

Josh starts the story: “One of the first mountain bike rides I took her on was Pine Hill Park in Rutland—I had never been mountain biking before, and he takes me to this park… he almost killed me!” Jamie insists.

“I took her on a trail that was really rocky and rooty, and I almost lost her to mountain biking for ever,” Josh laments, as Jamie adds, “Being the first time, it was very intimidating.”

“The advantages [of living in Vermont] are being able to let our dog out the door, having tons of privacy and being able to ski right off our front lawn,” Josh says. “We both definitely want to raise our family here.” 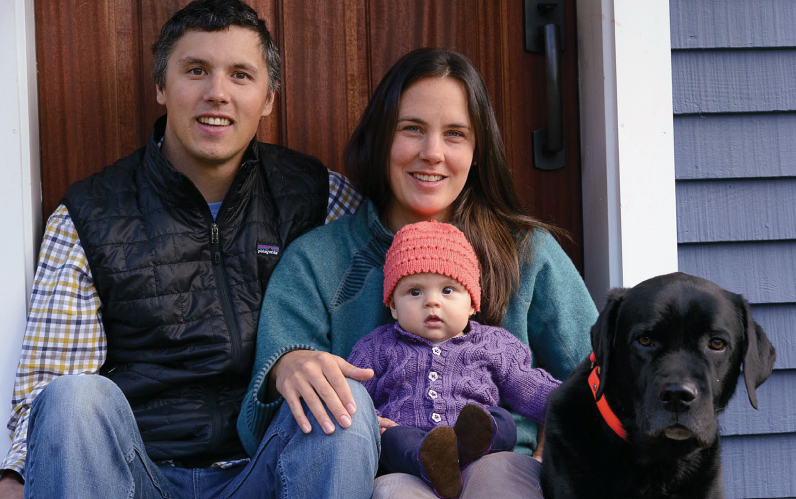 Josh, Jamie and Sawyer Wylie with their black lab Luke

“It was funny for me, because I’ve seen her ski and she’s fearless,” Josh says. “I watched her crash once, and she was tumbling and sliding a really long way, and still came up smiling.” He assures Jamie, “this was way tamer than some of the things I’ve seen you do on skis.“

From their house near Gale Meadows, the Wylies, their baby daughter Sawyer, and black Lab Luke have easy access to friendlier mountain bike options, paddling, hiking, ski trails… you name it. And they’ll tell you that they have it good.

“The advantages are being able to let our dog out the door, having tons of privacy and being able to ski right off our front lawn,” Josh says. “We both definitely want to raise our family here.”

They are doing that, too—Josh and Jamie welcomed a daughter, Sawyer Helen, in April of 2015. Already, she loves being outdoors, and they’re excited to introduce her to the best parts of growing up a Vermonter. “It will be fun to teach her skiing and snowboarding, Nordic skiing, golf, soccer,” says Josh. “She’ll be able to enjoy all the best stuff that Vermont has to offer. That’s pretty special.”

Both Wylies count themselves lucky to have found jobs they find enjoyable and challenging.

What makes them experts? They grew up here, too.

Josh is a Stratton native: “I was up on the mountain all the time growing up. It’s just something I love,” he says. He started riding competitively in his late teens, and after graduating from Burr & Burton, Josh joined the U.S. Snowboard Team to race in slalom and GS. “I traveled all over the world competing, and that was possible because I grew up right here at Stratton.”

During his nine-year competitive career, Josh earned two national titles and raced on the World Cup circuit. “Snowboard racing is more popular in Europe than it is here; racing there is probably the best,” he remembers. “The bottom of the hill would be completely packed with people with cowbells and beer… it would just get wild.” For a long time, the traveling was fast and furious: “I’d travel out West for two weeks, have a couple days off, then go to Europe. I’d come back home, repack, and fly out again for my next trip,” he says.

Jamie also grew up following the snow all over the world. Growing up in Waitsfield, Vermont, she attended the ski academy at Green Mountain Valley School, which offered plenty of travel opportunities. “With trips to Europe and out West, I saw a lot of the world without leaving my home town at a young age,” she says.

Eventually, they both found themselves at the University of Vermont, studying business and entrepreneurship. Josh was chipping away at a degree with a summer class here, a fall semester there—whatever could fit into his competition schedule. Jamie, meanwhile, was a powerhouse on the UVM alpine team, a four-time All-American and the school’s first female skier to win two NCAA Championships in giant slalom.

With similar friends in the snow world, the pair became friends at UVM and even dated for a bit before Josh’s competition schedule soon took him back on the road. “We broke up, but stayed friends for eight years,” says Jamie.

After college degrees, a post-graduate year in Utah (Jamie), and a few more years of racing (Josh), they both found themselves in Stratton. She had taken a coaching job at Stratton Mountain School, and he was still calling Stratton home base. “When I moved back here, he was back around Stratton off and on and we’d see each other once in a while,” says Jamie. The magic? “It just kind of happened.” (At least, that’s the PG version.)

Now the pair, brimming with talent and youth, lives in the quiet shadow of Stratton Mountain in a lovely home that gives them easy access to Gale Meadows. What made them decide to settle here of all places? They quickly recount the things they love about living in Vermont: an outdoors lifestyle, the privacy, and even the rainy, foggy days. “Home is home. Vermont’s an awesome place,” says Jamie.

Still, life in Vermont is hard, especially for 30-somethings like Josh and Jamie. It’s a land of pockmarked dirt roads, long winters, and “you can’t get there from here.” The rural, quiet towns aren’t particularly attractive to many other younger couples. “Nothing’s very close, other than skiing,” Josh commiserates.

“It’s sometimes tough to meet friends and younger couples that are into the same things we are,” says Jamie. Josh adds, “The age demographic is not in our favor. Our friends aren’t necessarily all our own age, but we meet people based on the things that we like to do.”

They’ve seen a lot of friends come and go, some part of a slow exodus after high school and others part of the more transient mountain community.

“One of the reasons everybody leaves is that there’s a lack of great job opportunities, unlike other places,” explains Josh. “We all know that we grew up in a great place, but ultimately it’s hard to get a job here.”

Both Wylies count themselves lucky to have found jobs they find enjoyable and challenging. She is still with SMS, coaching women’s alpine skiing and conditioning, while Josh works with his dad in the family construction business. “When I was younger, I thought, ‘No way, Dad, I’m never going to work as hard as you do,’” Josh says, “but it sort of fits. I have a lot of fun working with him, and I’m learning new things almost every day.”

“ Growing up here, having family and friends here, the familiarity… that’s what brought me back, if you could say I ever really left,” Josh says.

“Growing up here, having family and friends here, the familiarity… that’s what brought me back, if you could say I ever really left,” Josh says. He left the competitive snowboarding world about five years ago, when he was in his late 20s. “For Jamie, without that job opportunity in the ski world, I’m not sure I would have ever gotten her to come here.” Jamie adds thoughtfully: “That may be true!”

They both agree, unequivocally, that the less pleasant parts of rural living are easy to forgive, and they hope Sawyer will too. “It will be fun watching her learn and grow and then decide what she likes best,” says Josh, to which Jamie adds, “We’re just hoping she likes the snow!” ◊

Meryl Robinson is a 20-something who also made the (sometimes questioned) decision to live in Vermont.