Nathaniel Durfee remembers his childhood weekends clearly. Starting at age three, he and his family would head to Willow Park in Bennington almost every Saturday to participate in the “fun runs” organized by the Batten Kill Valley Runners (BKVR), a local nonprofit running club. While his parents ran in the adult 5K, Nathaniel would join other kids in a quarter-mile race organized by BKVR club member Kathleen Newton.

“I had what my mom called ‘Little Boy Disease,’” says Nathaniel, a 2014 graduate of Mount Anthony Union high school in Bennington. “My idea wasn’t to win, but rather to be in front of the pack at the beginning. I’d sprint off the starting line, running as fast as I could. That was my strategy back then—but it didn’t work very well. By the finish line, everyone had passed me.” 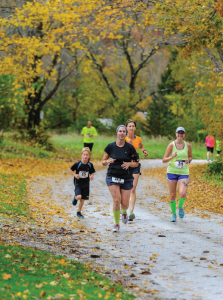 Running family members spread out along River Road in Arlington.

This past June, as a wiser and more experienced runner, Durfee wrapped up a successful high-school track and field career with Newton as his coach. He’s heading to Middlebury College this fall and will continue to run as an undergraduate—if not on the college’s Division III team, then for himself. In all likelihood, he’ll be a lifelong runner. And his love for running has its roots in those quarter-mile, little-kid scrambles organized by Newton and the BKVR in the mid-1990s.

“The ‘why’ of our club is to give people some other reason to run than ‘Oh, I gotta do my three miles. Running as a group is great, but organizing community races is even better. It’s a hell of a lot of work, but we get a lot of satisfaction in simply hearing people say ‘thank you.’”—founder Jack Quinn

The club was founded in 1995 by Jim Sullivan, Jack Quinn and several other local runners. At the time, Quinn was working as publisher and editor of the Vermont News Guide and Sullivan was a planner for the Bennington County Regional Commission, where he still works as executive director. After participating in a small, local 5K race, the two men got to talking.

“Jim said, ‘You know, we really ought to start a running club,’” recalls Quinn. “I thought that was a great idea. He had a lot of good ideas, and I had the advertising and promotional resources.” Sullivan was inspired by running clubs in the Albany and Glens Falls, New York, area that would arrive as a convivial group at races around the region. “They seemed to have a real identity, a sense of community,” he says. “I wanted to create that here.”

The first meetings were held at the round table in the back of the Wayside Country Store in West Arlington, a well-known spot for locals to stop for a cup of coffee, a quick bite and conversation. The founders and early organizers numbered a half-dozen people or more, including Sullivan and Quinn; the late Len Kotler and his wife Becky; John Pelton of Rupert; and Anita Gabalski of Shushan, New York, who still serves on the BKVR board of directors.

“Our original goals were to create an identity, run together and get organized so we could help out with local races or maybe start some races of our own,” says Sullivan. They named the all-volunteer club after the geographic reach of its new members, who lived in towns that line the Battenkill River as it runs from Manchester through Arlington and into eastern New York. Every weekend, the group would gather for a Sunday run, with the meeting place and route published in a printed newsletter. They also started managing existing races, starting with Arlington’s annual Battenkill Duck Derby 5K. With Sullivan serving as race director, the club hosted that race for 12 years, starting in the mid-1990s and adding a longer 12K.

“I have a lot of great memories of those early days,” says Sullivan. “It was fun to sit around the table at the Wayside and plan the weekend runs. And a lot of us got our kids and families involved, too. One year, quite a few of us participated in a national event called ‘Run to Work Day’ that was sponsored by our nonprofit parent organization, the Road Runners Club of America. I was living and working in Arlington at the time; my daughters were in elementary school there. We ran to school and then I ran back to my office. Anita Gabalski ran 24 miles from her home in Shushan to her job in the Capital District. She won the national award that year for being the person who ran the farthest to work.”

The first race that the BKVR started from scratch was the Running of the Turkeys, a 5K held in Arlington on Thanksgiving Day that’s approaching its 18th year. Soon after, Scott Printz, another early BKVR organizer, founded the annual Moonlight in Vermont race that still takes place in Pownal every July. It’s a four-mile midnight run on a course lit by luminarias and volunteers holding flashlights (most of the runners wear headlamps, too). Like every race the club hosts, a portion of the proceeds from registration fees are donated to a local nonprofit—in this case, the ePownal Valley Fire Department.

For the past 12 years, Dave Durfee—Nathaniel’s dad—has volunteered as race director for the Moonlight in Vermont event. He serves as the club’s vice president, and his story is typical of the BKVR community and mission:

“In 1998 my wife and I were living in Pennsylvania at the time, and we visited Vermont to run in the Moonlight race, which was hosted by the BKVR. We had a great time. Coincidentally, we moved to Shaftsbury two years later. I was really looking forward to the race, but it didn’t happen that summer. That’s how it goes sometimes with events put on by volunteers. Meanwhile, I had started running with the club and I said to Jack Quinn, ‘You know, I love that race so much, I’d be willing to direct it if someone will show me what to do.’ And I’ve been directing it every year since then.”

At one point in the late 1990s, the club had about 150 members, and the weekly runs were always well attended. Though it has continued to be involved in local races—sponsoring its own events and either organizing or assisting with high-profile races like the Maple Half Half Marathon—its membership has declined over the years to its current roster of about 50 people. That’s changing with the return of Jim Sullivan as the newly elected president.

“Clubs ebb and flow over the years,” he says. “And so did the BKVR. We’re on an upswing again and it’s exciting.” The club currently stages five of its own annual races: the Steven Zemianek Bennington Road Race in early May; the Shires of Vermont Marathon from Bennington to Manchester in mid-May; the Moonlight in Vermont race in Pownal in July; the Wandering Witches Trail Race in October in Greenwich, New York; and the Running of the Turkeys in Arlington in November. Sullivan and the BKVR crew are also recruiting members through a new Website (www.bkvr.net has replaced the outdated www.bkvr.org), a Facebook page (www.facebook.com/pages/batten-killvalley- runners), a revived newsletter, and group runs every other weekend.

“Clubs ebb and flow over the years,” Durfee says. “And so did the BKVR. We’re on an upswing again and it’s exciting.”

“We’re having a nice little renaissance with Jim as the president,” says Dave Durfee. “He has been a cheerleader for bringing back the group runs, for getting the word out on the Internet. It’s great that this club is still going—and growing.”

The marquis event is the relatively new Shires of Vermont Marathon, which was founded by Durfee and his wife, Melanie Dexter. In 2009, Dexter ran her first marathon—in Minneapolis, Minnesota—and returned to Vermont inspired. “She was talking about every detail of the race, and it resonated with me,” says Durfee, “because for quite a while, I’d had this notion that it would be great to run a marathon from Bennington to Manchester. They’re just about 26 miles apart, and they’re the two shire towns of Bennington County, and at that time, both communities were approaching their 250th anniversaries. It seemed like the perfect hook for a race.” Though daunted by the logistics of staging a marathon, Durfee stepped up as race director with the club behind him. The first successful marathon was held in May 2011 with 250 runners registered. It’s now directed by volunteer club member Steve Murphy, a longtime runner and the interim executive director of Riley Rink at Hunter Park, who took over the race when Durfee asked to bow out.

With energy and enthusiasm, Murphy put his own successful stamp on the 2014 marathon, which was held on May 18  (www.shiresofvermontmarathon. com). The course started at Bennington College and ended at Riley Rink, where Murphy had organized a “Taste of the Shires” event with local food and craft vendors. The race attracted 375 registrants from 37 states, plus two runners from Canada and one from Ireland. A number of local nonprofits helped out, manning water stations along the route, and the lead corporate sponsors included Stratton Mountain Resort, Southwestern Vermont Health Care, Hand Motors and Flying Cow Signs. A volunteer group from Rutland— Drum Journeys of Earth, led by Gary Meitrott—set up a drum circle at the Manchester roundabout near the Northshire Bookstore, offering an exhilarating percussion beat as the racers entered the final stretch.

In years to come, Murphy thinks the marathon can expand to a maximum of 1,000 runners. “It’s great exposure for our community,” he says, “…a way to get our name out there in a positive way, and another good reason to visit Manchester. Marathoners tend to stay overnight and bring a guest. They have high disposable income; they eat in restaurants and they shop downtown. It takes a lot of volunteer effort and a lot of work, but we believe this race can be a significant event for the community and a wonderful boost for the economy.”

Murphy’s explanation of the marathon’s mission is a perfect summary of the broader aim of the Batten Kill Valley Runners. “The ‘why’ of our club is to give people some other reason to run than ‘Oh, I gotta do my three miles,’” says founder Jack Quinn, who’s still rinvolved with the club today. “Running as a group is great, but organizing community races is even better. It’s a hell of a lot of work, but we get a lot of satisfaction in simply hearing people say ‘thank you.’”

“Races are a fun, high-energy way to get people together and to support a lot of great local causes,” says Sullivan. “You put so much time into the event in the months and weeks leading up to it. Then it’s race day, and you’re out with your friends, setting course at 4 a.m. and watching the sun rise…Then you see a few hundred people at the starting line, and there’s so much energy, and the gun goes off, and you think: ‘We did it.’ It’s tremendously gratifying. People love races. And so do we.” ◊

Kathleen James is a freelance writer from Manchester and a frequent contributor to STRATTON MAGAZINE.