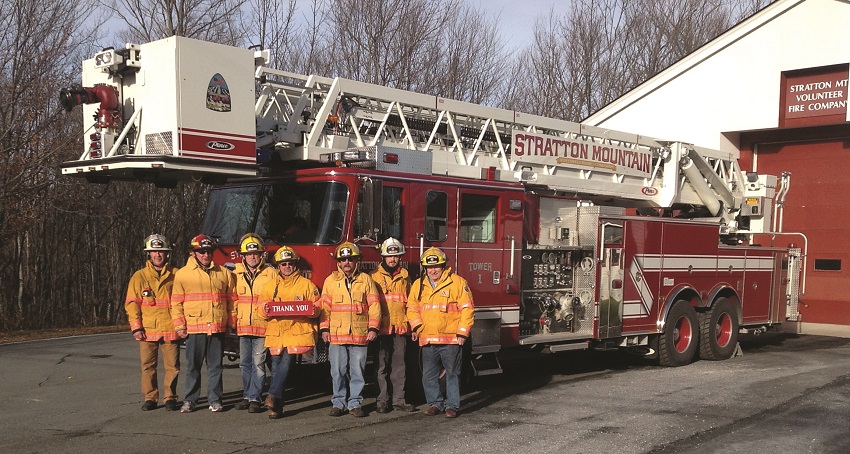 Even in a small community such as Stratton, there are plenty of ways people can volunteer their time and make a difference for their friends and neighbors. Some people are drawn to help their local schools; some folks spend long hours brainstorming with planning committees or through local councils. And for a handful of brave souls, there is the volunteer fire service. For those chosen few, the idea of walking into a burning building doesn’t deter them. They are driven by the adrenaline that comes when that fire pager wakes them up at 2 a.m., when most of us are sound asleep. For local rural fire service members, the challenges and dangers they face are all worth it to help their community and family members in a time of need.

2018 marks 50 years that Stratton Mountain Volunteer Fire Company (SMVFC) has been responding to emergency situations for the town of Stratton. Averaging approximately 65 calls each year, the SMVFC volunteers respond day and night in some of the worst weather mother nature can throw at them. The Stratton fire district spans an amazing 46 square miles (Boston, Massachusetts also covers 46 square miles of land), with more than 50 percent of that area lying inside the Green Mountain National Forest. This requires responders to be prepared for not only standard house fires and car accidents, but to be well equipped to tackle incidents such as backcountry fires where water can be scarce, as well as hiker injuries because multiple, high-traffic trails traverse the town. If a fire in a neighboring town requires extra resources (a multi-alarm fire), SMVFC is called in to provide available resources, including their coveted ladder truck, which is rare to find in rural fire districts. 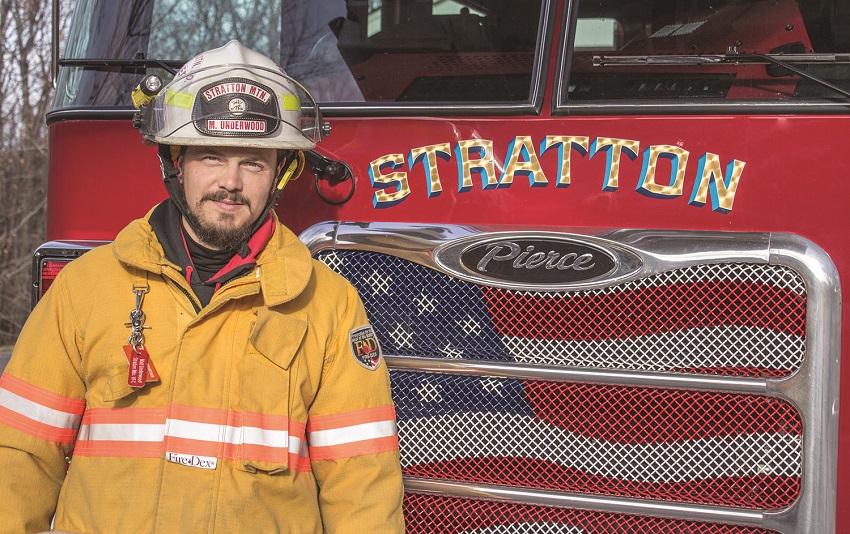 Many of the calls received can be a simple fire alarm malfunction. But when the fire pager alerts responders of smoke conditions in the basement, or a chimney, it has the potential to be a serious situation and an evacuation is warranted until the fire department can ascertain the cause. It is signals such as these that firefighters must be trained for; they need to be prepared for any looming catastrophe to help not only those folks in distress, but also their fellow firefighters. These are just a few factors that keep them returning for each call. Lives are at stake, priceless possessions and things that can’t be replaced (such as family photographs) are easily lost . . . these are some of the core values that drive a local volunteer firefighter.

In 1968, Stratton Mountain ski area had developed the Sun Bowl side of the mountain, and it was becoming apparent to some in this nascent community that the area at the top of the Stratton Mountain access road needed additional fire protection. Folks including John Planck began offering help with the purchase of fire equipment to furnish a fire company to service this area. Casey Rowley was a member of the ski patrol at Stratton Mountain and very familiar with the needs of a rescue service. Both John and Casey were happy to offer up their knowledge to get things off the ground. SMVFC was established with the help of people such as Harvey Clifford, Craig Swart, Gary Plante, Ralph Rawson, and Emo Heinrich, just to name a few of the many folks involved with the founding of SMVFC. According to one of the founding members, Casey Rowley, “the first few years were a little feeble. All we had was a pickup truck with a portable pump, which was stored at the town’s maintenance garage. There were almost no permanent residents in those days, so finding people to respond year-round was very difficult.” Casey held the role of fire chief for many years after the founding of the fire company. The early 1970s brought continued success for the ski area and support for SMVFC increased to the point at which they could purchase their first true fire engine with help from both the town and the ski area. Reggie Sears helped build a firehouse to create the first real firehouse on Brazer’s Way to house their new fire engine and to provide a place for SMVFC to call home. 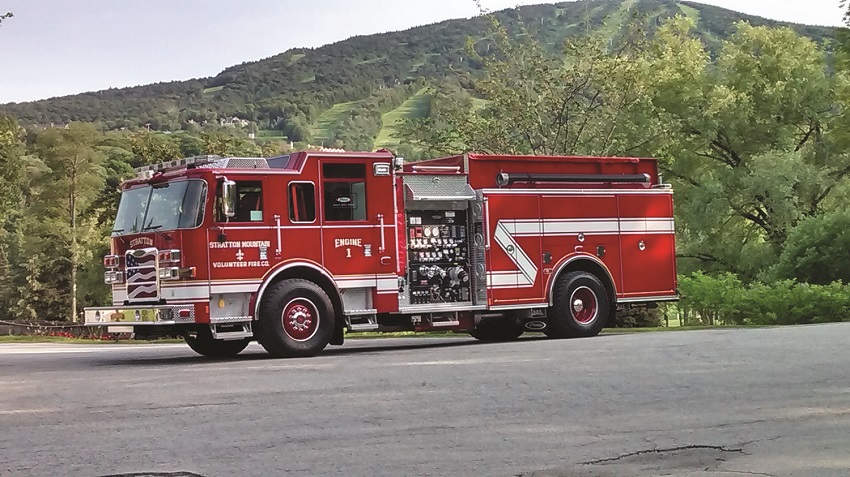 SMVFC is set up as a private fire company as opposed to a municipal fire department. This means that Stratton Mountain Volunteer Fire Company is a not-for-profit, private organization, which is not typical for rural fire districts. SMVFC is structured in a way that may be familiar to most in the corporate world. There is the executive side of things headed up by the president and the vice president of the company. Currently John Waite and Ric Swenson respectively fill these positions, with Alison Labatte as the secretary. On the operation side of things, you will find Chief Matthew Underwood, Assistant Chief Ray Hawksley, Captain Al Dupell, and Lieutenant Gary Johnson. On the financial side, Laura Hawksley runs reporting and fundraising components for the company while Kevin Robinson is the treasurer. These all are in place to help equip the firefighters with the tools they need and to keep the fire company’s resources turning like a well-oiled machine. This includes keeping the trucks and all related gear properly inspected and up to date. Training needs to be ongoing to keep firefighters’ certifications current. Paperwork and accounting need to be properly filed and invoices paid. There are a lot of moving parts that keep a volunteer fire company ready to respond to calls and a lot of hours from volunteers to keep the “i”s dotted and “t”s crossed.

The current fire chief, Matthew Underwood, has been the chief now for almost 12 years. His father, Stewart Underwood, was one of the original members of the company and was chief there for nearly 25 years. Matthew officially joined SMVFC at the age of 14, but as he states, “I grew up in the environment of the volunteer firefighter.” His father Stewart, a nearly 40-year veteran of the Stratton fire company, having served as a firefighter for the military during the Vietnam War, enjoyed the brotherhood he found in the fire service. When he returned to the States, he felt he “owed some level of service. What better [way] than to use my prior experience as a firefighter to help my local community.” Stratton does not have a large population (the 2010 population stood at 216) and Stewart lived in town, so when Casey Rowley stepped down, he was named chief of SMVFC.

SMVFC is mainly funded through Stratton town with contributions from the ski area. This is supplemented with fundraising efforts from members of the fire company. SMVFC’s annual direct mailing is their biggest source of raising funds outside of the town’s. Those familiar with the fire service can understand the struggle to keep up with raising enough money for new equipment and resources mandated by the National Fire Protection Association (NFPA). This is especially true in rural areas. Ultimately these guidelines were established to provide protections for firefighters who need to adapt to the changing conditions they encounter in modern fires. Synthetic materials found in a typical house tend to burn hotter and faster than traditional natural fabrics. Firefighter gear costs correspondingly increased (ranging from $12,000 to $20,000 per volunteer) to ensure the safe entry into an environment with smoky conditions. Also, additional training is required to identify signs of potentially dangerous situations from newer, lightweight construction of houses.

A firefighter’s first goal is to make it back home safe after a call. Saving the life of their fellow firefighters and neighbors is the next most important aspect, while saving property comes next on that list. Stratton Mountain Volunteer Fire Company has proudly kept these firefighter priorities in mind and has yet to experience a major injury during a call. With continuous training and support from the community, there is no reason that does not carry on. Happy 50th anniversary SMVFC!