“ It’s all about kids…The kids who live in the local community are our number one priority and we want to make sure they have food, shelter and clothing, and that they can participate in programs that help them see a vision for their own future.”

The nonprofit began hosting events and—with the help of donations made by local businesses, residents and second homeowners—made small grants to locals in need, just as founders intended.

“The people who started the Stratton Foundation really loved Stratton,” says Tammy Mosher, the foundation’s executive director, who joined the organization in 2010.

“It just continues on with every family that comes up here. They create their own memories, history and want to give back.”

One of those people is Carolyn Blitz, who has been a homeowner at Stratton for 13 years and is the current president of the Stratton Foundation’s board.

“I got involved because I wanted to know more about my community and its needs,” says Blitz.

In 2010, the foundation decided that, with growing need, stronger partnerships within the community were needed. Stratton Resort decided to wholeheartedly embrace the idea, and so the foundation was provided with additional resources.

“The partnership with Stratton Resort has been great. I don’t think the foundation would be the kind of iconic resource for the area without the resort’s generosity,” says Mosher. 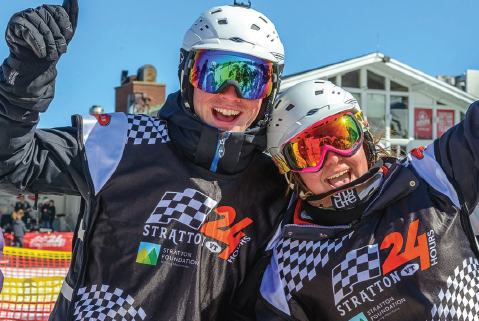 24 Hours of Stratton, held on March 19–20, and one of the Stratton Foundation’s key fundraisers, is a family-friendly skiing/snowboarding team event.

Stratton Foundation continued along, making grants, expanding their giving to
arts, education and assisting other nonprofit organizations. And then, without much warning, Tropical Storm Irene immobilized much of Vermont. Stratton Foundation was able to provide much needed assistance for over 300 residents in the months after the storm. Like so many other times since the foundation’s inception, the team went to their strong support network of Stratton homeowners. In addition to writing checks, they provided temporary housing, blankets, clothes and more.

“That’s when we realized the incredible compassion and heart of the people who come to Stratton,” says Mosher. “It’s not just a ski resort or a getaway. So many wanted to give back and to compensate somehow for what Vermont has given them generation after generation.”

The Stratton Foundation continued to grow, developing several signature events, including the 24 Hours of Stratton, which has raised over $700,000 in the last three years.

“We made a decision along the way to sponsor fewer events, but to make the ones we do bigger and better each year. That’s really our goal,” says Blitz.

With the money raised from events and donations, the foundation supports mental health and social services, nutrition and backpack programs, food shelves and pantries. It provides heating and fuel assistance, access to dental and medical care, as well as mentoring and educational services.

“ We don’t just put Band-Aids on a problem; our hope is that when we help someone, we’re really making a difference.”

“We are very grateful for the Stratton Foundation’s support of the children and families
of our area. Their generosity has provided children with an opportunity to participate in school and community fee- based activities, to have warm clothing in the winter, to

have personal dental kits, to have a Thanksgiving turkey on their table, to have gifts to open during the holidays. In short, it’s given the less fortunate a way to feel just like their peers,” said Laura Hazard, principal of Jamaica Village School.

“We feel strongly that if you can eliminate the challenges that a child living in poverty endures, you give them the freedom to focus on their education,” she says.

For Blitz, that’s the real reason why residents should get involved with the foundation, and perhaps the most important. “People need to be educated about the needs. My experience—and I think it’s the same for all of our board members—is that once you really understand what challenges some families in Southern Vermont are facing, there’s no question that you want to be helpful,” she says. “The first step toward doing that is really learning more about what needs people are living with, then working with us to find a solution.”

Over the last twenty years, the Stratton Foundation has been “moving mountains,” as their tagline affectionately reads. To celebrate its next twenty years, the group is looking forward to continuing to be a force in the community. “We want to be helping families and changing lives,” says Mosher. “We don’t just put Band-Aids on a problem; our hope is that when we help someone, we’re really making a difference.”

With 20 years under its belt, what’s next for the foundation?

“To me, for the foundation, it’s all about kids,” says Blitz. “The kids who live in the local community are our number one priority and we want to make sure they have food, shelter and clothing, and that they can participate in programs that help them see a vision for their own future.”