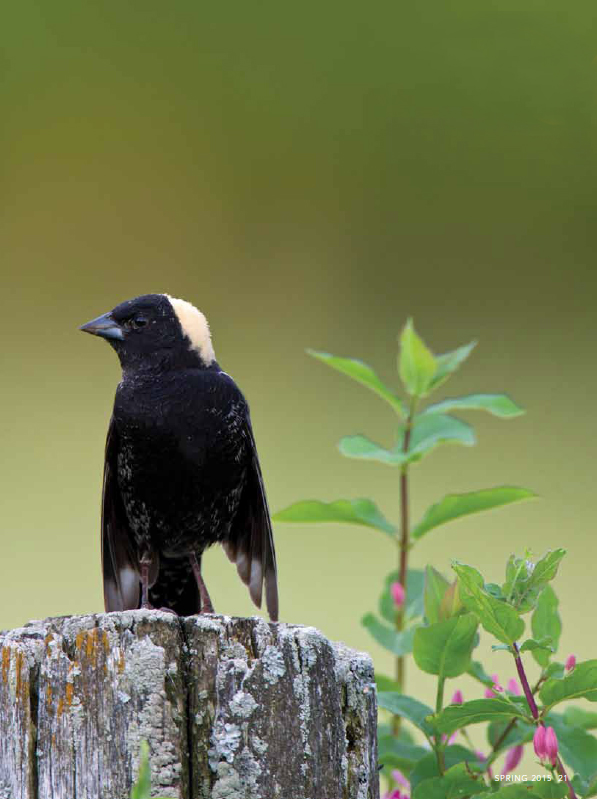 Sometime in late May, Bobolinks will return to nestle in the tall grasslands and uncut pastures of Vermont. Like geese and butterflies, the Green Mountains welcome these winged travelers home from a long journey. The Bobolinks winter migration takes them further than both the butterfly and the geese, though. Their round-trip voyage spans thousands of miles from the fields of South America and back to Vermont just in time for crisp spring mornings. Sometimes they migrate upwards of twelve thousand miles.

These hayfield harpists aren’t hard to miss with their stunning physical characteristics.

Perched on a tree branch or flying high over a field, mating male Bobolinks are handsomely turned out with white backs and black underparts—almost like a backwards tuxedo—and they sport a rich, golden patch on the backs of their heads. But, as summer ends and the male prepares to wing his way back to South America’s exotic grasslands, he becomes a muted, dull brown like his female counterpart.

More striking even than their appearance is the song they sing. Male Bobolinks warble a long, bubbly song. A song so inspiring it caught the ear of Emily Dickinson, who called the bobolink “the rowdy of the meadow.” An intricate mix of sharp, high notes and low, electrified tones, each male has two song types, each consisting of between 25 and 50 notes lasting just over three seconds. “A mad, wreckless song fantasia— an outbreak of pentup irrepressible glee,” says one admirer. “A bubbling delirium of ecstatic music that flows from the gifted throat of the bird like sparkling champagne,” says another.

And they save their songs for our ears.

Males are most vocal during mating or while claiming territory, both of which happen during their months here in the northeast.

Bobolinks build their nests on the ground, under a dense cover of grass and wildflowers. By midsummer, large flocks can be found perched together on flower stalks as they prepare to travel south once again. The birds prefer hayfields more than eight years old, with less vegetation and more grass cover, and often return to the same fields to nest year after year.

Despite the distinct space these birds fill in Vermont’s ecosystem, the prospect of a spring without Bobolinks is all too real. The population has plummeted 75 percent in the last four decades in the Green Mountain State.

What’s causing the decline of these stunning creatures?

Everyone loves the smell of fresh-cut hay…except for Bobolinks. They welcome new life at the same time farmers harvest their first cut of the season, leaving newborn Bobolinks exposed to predation. With advances in agriculture that allow fields to be harvested two or three times each summer, the songbirds don’t have enough time in between to nurture their young.

Here in Vermont, dedicated farmers are providing nesting habitats to grassland birds through the Bobolink Project. Last year, the project supported bird-friendly management practices on 20 fields throughout the state, covering over 200 acres. The program pays farmers to delay their first harvest or to forego grazing on smaller fields until the fowl are done nesting.

Bobolinks are by no means endangered, with 100,000 birds each year in Vermont alone. With some attention and dedication, they won’t become endangered either. Their songs and beauty are too rich to lose.

If you’ve never heard a Bobolink in person, do yourself a favor and go to your computer and listen to one sing on You Tube. One version, recorded by Lang Elliott of The Music of Nature even slows the song down to half time so that you can actually listen and absorb the crazy, mad, exuberance of the Bobolink’s song.