The Creation and Debut of Humphrey’s Trail 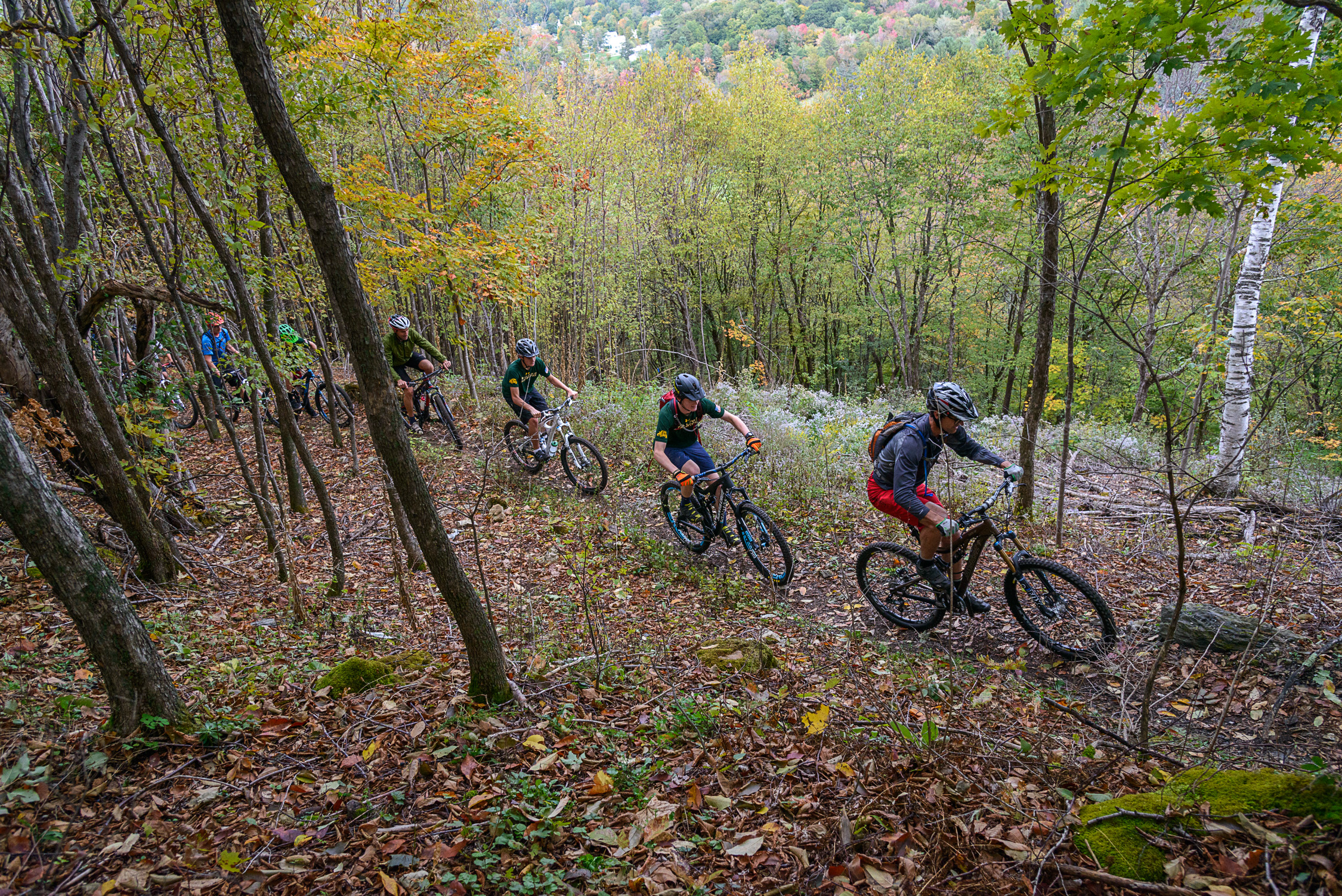 For far too long, fans of mountain biking — those people who throw caution to the winds and navigate downhill on narrow trails or who strain to pedal uphill to overcome gravity — have been underserved in Southern Vermont.

“Followers of the sport had to go far afield for their kicks. That might mean traveling northwards to the Kingdom trails network centered around Burke, Vt., or Ascutney, or Pico Peak near Rutland, or make do with old logging roads in the area,” said Joe Miles of Manchester.

Mountain bikes are different from the sleek machines seen cruising the sides of roads. They have wide, fat tires, and a brawny-looking frame to absorb the pounding that comes from riding them up or down mountain trails with their assortment of rocks, brooks, and underbrush. For their devotees, there’s an exhilaration to the experience that can’t be beat.

But neither is it about the daredevil jumps and acrobatics sometimes associated with the sport. “It’s more like cross-country skiing on a bike,” he said.

A typical trail will be about 18 inches wide, which sounds a little on the narrow side, but wide enough to skirt along past tree branches and other foliage on a hard, dry trail that goes up or down by no more than a 10 percent grade. Translation: no more than a 10 yard overall incline or decline over a 100 yard stretch. 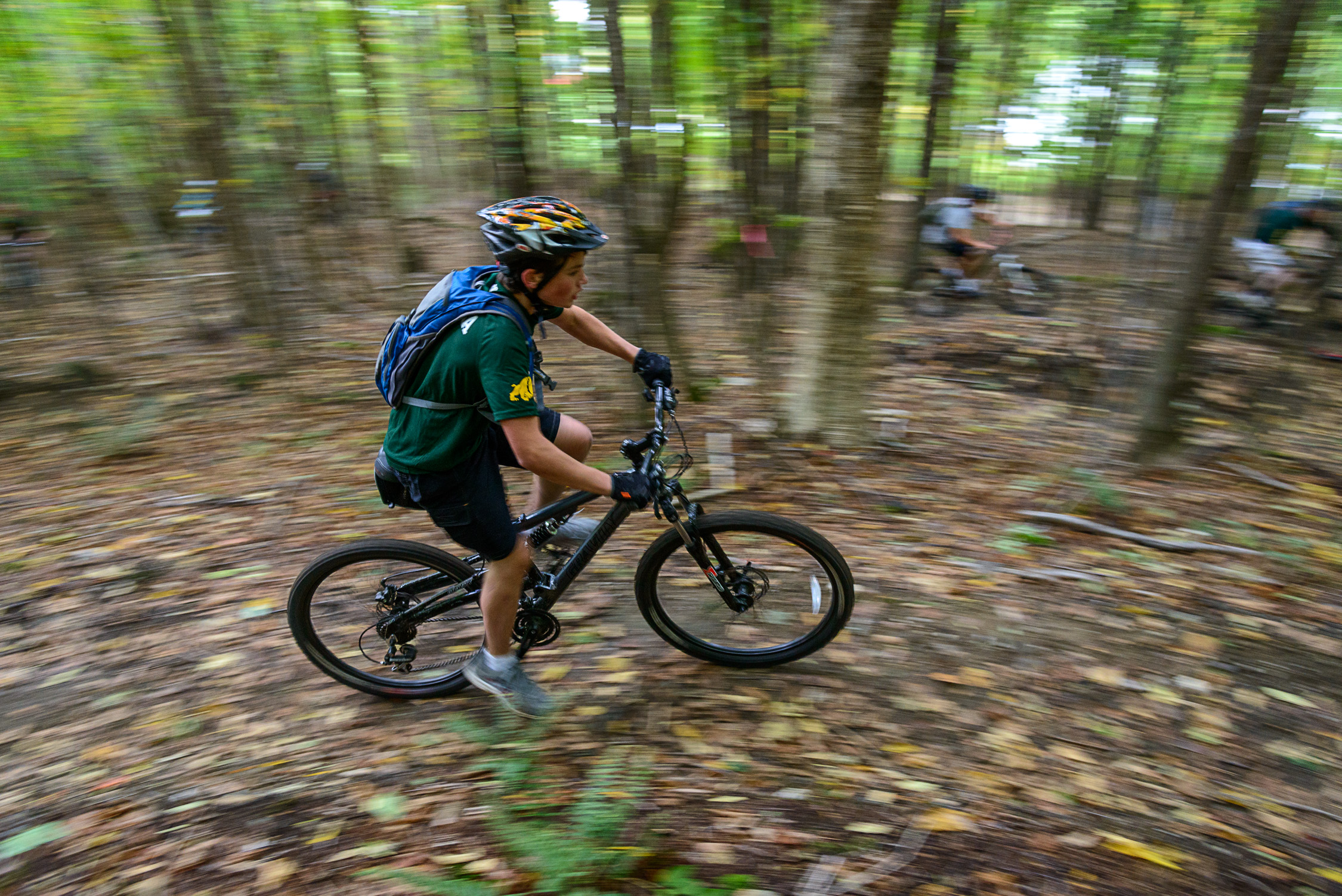 “This is a growing sport,” Miles said, one that has taken off since the 1990s and is big business.

The Kingdom Trails network draws many people to the area, as does a trail network around Stowe. “But there was nothing like that in Manchester or Southern Vermont at all,” he said.

That started to change in 2011 when he and a group of friends decided it was time to “do something,” he said. First they formed a bike club, called the Manchester and the Mountains Biking Club — MMBC for short — a full-blown 501(c)3 organization. The mountain bike group from MMBC went on to set up their own chapter under the state wide Vermont Mountain Bike Association. This new chapter of VMBA is called the Northshire Area Trail Systems, or NATS. MMBC still exists but is primarily road riding-centric.

Then came the hard part.

“Unless you have trails, you can’t mountain bike, so we decided we needed to get into the trail building business,” he said.

There are two ways to go — federal land and private land. The federal process is not impossible, but it is slow and shall we say bureaucratic — there are a lot of boxes to be checked off. Permits need to be issued, approvals granted, and everything from archeological to environmental impacts assessed. It’s not that the Feds aren’t willing to help and cooperate, but by law there are a lot of hoops to jump through. The mountain biking group is now nearing the end of an initiative along these lines which was launched back when the club was first being organized and is building a trail off of Dorset Hollow on federal land in the Green Mountain National Forest. Work has started on this new trail, which runs off of Grouse Lane. The trail will be almost four miles long when finished and Miles expects it will take about four years to complete.

The other route is to find a private landowner willing to allow a trail to be cut through their property. It’s not everyone’s cup of tea. But the liability is very limited — in the event of an injury, it’s the rider’s fault, unless the property owner goes out of their way to create a hazard. In 1998, the Vermont Legislature updated the state statute protecting landowners who let the public use their land and water free of charge for recreational purposes. The law was rewritten to encourage landowners to open their lands to recreational use and give landowners greater legal protection from personal injury or property damage claims and is much like the liability responsibility at the well-used Dorset Quarry for swimmers. And “having a biking trail will often add to the resale value of the property,” Miles said.

“But you still have to find that willing landowner,” he said.

“That led to a lot of discussions and emails but we found some great landowners who allowed us access off of Dorset West Road, near the end of Church Street,” he said. And on May 27, 2012, construction commenced.

“It was a near perfect spot,” Miles said. Close to a store and a place to park and rest and maybe have a beer or two after a ride through the woods, uphill and down. Far enough from the parking spot to give a nice warm-up ride along flat ground to get the juices flowing before entering what came to be known as the Humphrey Trail, after the family which owned the property (and still does).

There’s more to building a trail than hacking mindlessly through the woods. Joe and his friends laid out the course first — a winding, looping nearly four mile-long trail that offers a stern test right off the bat with a steep uphill climb — and then it was a case of fashioning a course that was never more than a 10 per cent grade up or down, and tilted enough so rainwater flows down the hill, not down the trail where it could pool and degrade to firmness of the trail.

Miles and his friend and fellow biking enthusiast Kevin Harrington spent nearly 40 hours just laying out the course. “Then the real fun started. Clearing out the debris, packing it all down, making it smooth while leaving the occasional root — this is mountain biking after all — eleven feet of progress per person per hour was a good rate of speed,” Joe said.

“If that sounds like a lot of work, that’s because it is,” Joe said. “We can build a trail that looks like it came out of nowhere, like it’s been there forever.”

Students from Burr and Burton Academy and Long Trail School helped out with the construction. It was mainly a weekend project, where volunteers and bike fans would randomly show up and whoever did got to help out.

Springtime is a period of the year that requires extra maintenance work, to clear away trees that may have fallen across the trail — a mere 18-24 inches wide — or clear up pools of water that may have gathered. The trails are built to the International Mountain Biking Association standards or similar National Forest standards when on federal land. 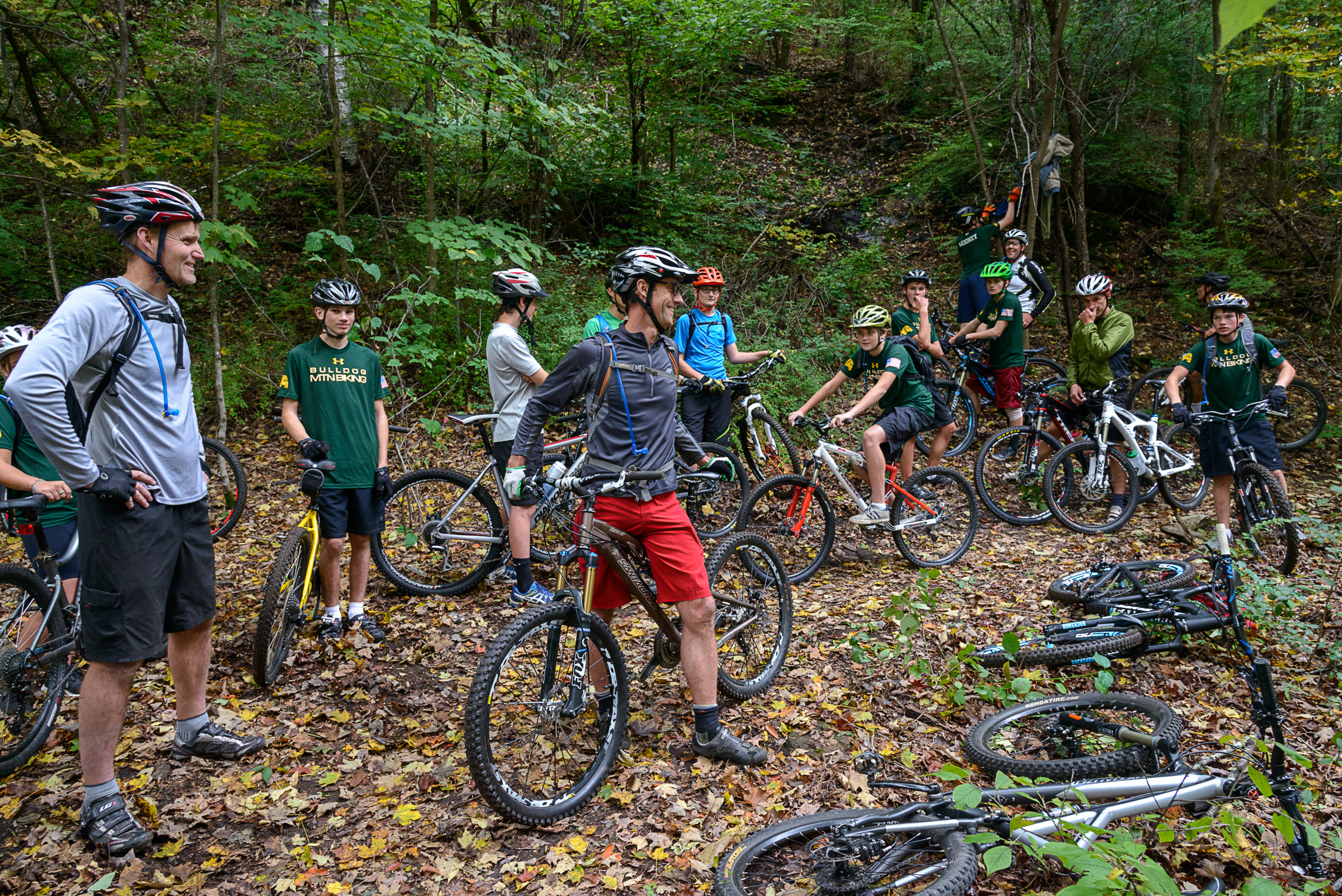 The three year effort paid off in the spring of 2015, when the trail officially opened. “It’s free, open to the public, and can be used for hiking and running as well as mountain biking,” Miles said.

Harrington, an independent contractor from East Dorset who started as a motorcycling enthusiast before switching over to mountain biking, is looking forward to the current project in Dorset Hollow. “It’s longer and will pose more challenges, but it does have a parking area,” he said.

So ….bring your own refreshments for the post-ride social hour. 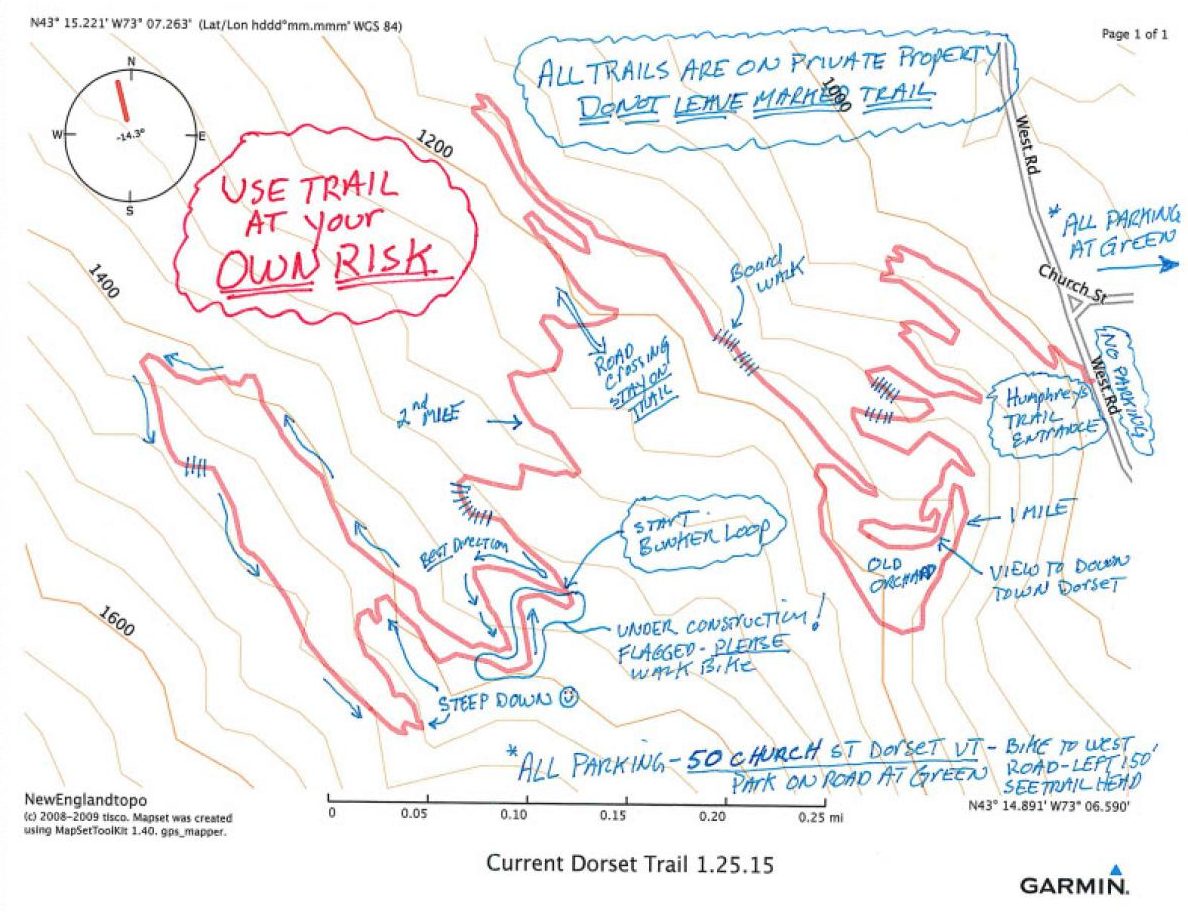