Maybe it’s just the novelty— pulling a fish out of a hole in the ice instead of from a dancing summer stream. Or maybe it’s just an excuse to get out of the house on a sunny winter day.

There’s a day come January when a ramshackle village suddenly appears on the ice at the mouth of the West River in Brattleboro. This is the day that the ice fishermen deem the season opener—the day when the ice is thick enough to haul out the ice shanties.

These little huts always look a little desolate out there on the wide expanse of ice. If you pull off Route 30 for a little while, you’ll see bundled figures moving along well-trod pathways on the ice, sometimes dragging bright red sleds filled with fishing gear—buckets, lines, hooks, tip-ups, augers and probably a good supply of beer, too. If the ice is thick enough, there might be a snowmobile or even a pickup truck out there to make the haul.

Inside the shanties, you can imagine a cozy picture: a few comrades-in-rods huddled up with hot coffee or a few cans of beer, with a radio on and a portable heater, taking an occasional peek outside to check their lines. This might ring true for some fishermen or women, but not all. Out on the ice, you’ll meet Mark Crowther, a wiry, energetic man who fishes without a shelter and thus is outside the whole darn time.

“I tend to go on the warm sunny days when I’m more likely to see my friends out there,” he says. “The whole idea of ice fishing there is that there is a little community. People hole up in the winter, and ice fishing is a nice excuse to get outside and get some sun on yourself.” 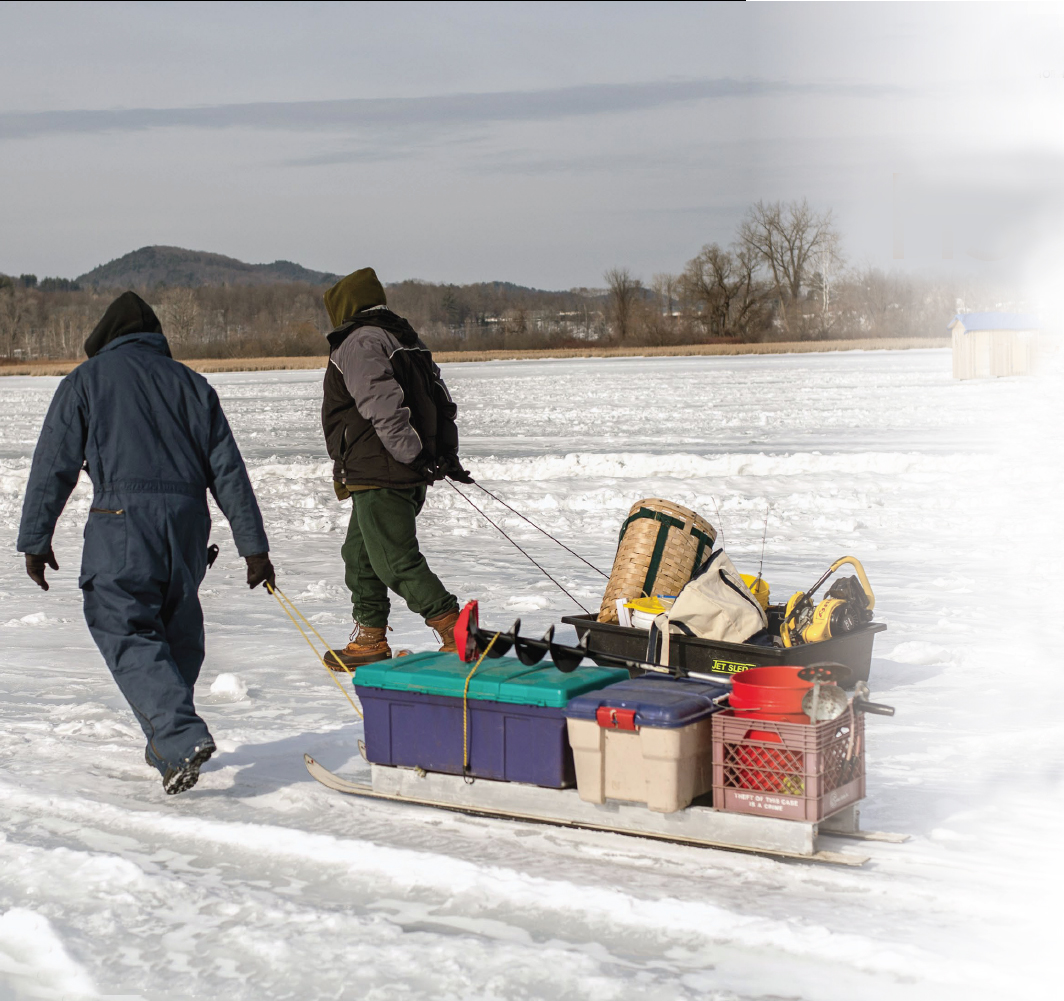 Mark, a born Brattleborian, has been fishing the Retreat Meadows (as this inlet on the north end of town is known) since he was 11 or 12. “I did the Brattleboro Carnival Fishing Derby that year, and I got a prize for being the youngest kid out there without a parent,” he remembers. “My dad dropped me off at 6 a.m., it was about 10 degrees, and I just fished all day. I think they kind of felt sorry for me.”

Mark’s years on the ice have awarded him stories to rival any romanticizing fisherman: he eagerly recounts the time he lost a “monster” of a fish when the hole froze over in -60°F weather as a kid, and then the day he fell in at the Meadows but was more worried about soaking his father’s borrowed Bulova watch (luckily, the water was shallow).

Some sound like tall tales, true though they are, like when Mark tells me about the time he pulled up a mudskipper in a shallower part of the Meadows. Mark didn’t know what it was at the time, but a Google search reveals a uniquely bizarre creature: a mud-colored, slug-shaped amphibious fish with spiky dorsal fins and stout pectoral fins that allow it to walk, walrus-like, on land. Two small eyes bulge up from the center of its big, round, frogish head. It’s creepy.

“A good day is when I look down in the bucket and see… did I catch dinner? Did I have a good time?” Mark quips. 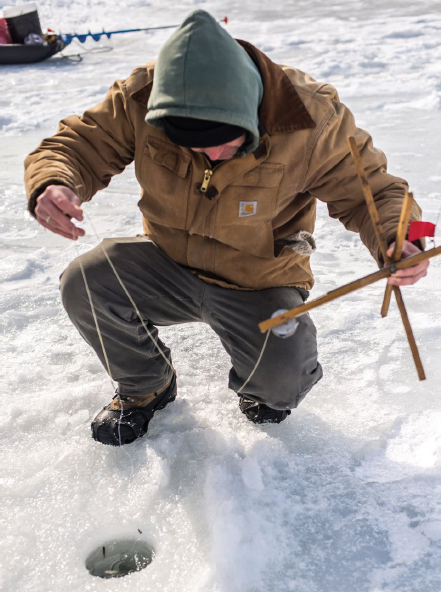 Mark Crowther ice fishes without shelter no matter the temperature.

Not every trip on the ice yields such a yarn; hopefully, it just turns up a bucket-load of fish. “A good day is when I look down in the bucket and see… did I catch dinner? Did I have a good time?” Mark quips. Mark’s perfect après-ice-fishing dinner is yellow perch fried in beer batter. “It’s a staple in the wintertime,” he says. “My wife loves to eat yellow perch, I love to eat them, and our dogs eat the eggs. I call it Vermont caviar.” (If you want to try his recipe for yourself, Mark catalogs his favorite fishing recipes on his blog, Brattleponics, at markcrowther.blogspot.com.)

To have a good day out on the ice requires a lot of knowledge, and quite a few tips and tricks. “It’s kind of a weird science, seeing what’s working and what’s not working,” says Mark. “It’s an interesting learning curve—it helps to have a mentor who knows what they’re doing.”

Mark himself has a mental encyclopedia of know-how earned over a lifetime-to-date of fishing, and can instruct on everything from which bait to use for a particular species to the lifestyles of the fish. He knows, for instance, that the Retreat Meadows is an attractive spot for fish that travel up and down the Connecticut River—the females, laden with eggs, are hunting for a place to spawn in April. In the Meadows, you might catch yellow perch, blue gill, black crappie, bass, pickerel and even northern pike. Each species is attracted to a different type of bait and a different method of fishing.

Knowing that type of detail is important because you can somewhat control which kind of fish you land by adjusting your technique and equipment. “There are the people that go to their shanty and hang out. They’ll set out big shiners on a tip-up for northern pike or walleye, and they wait. They might get one flag all day, but it could be a three-foot fish,” Mark explains. “And then there’s me. I just want to go out there and catch fish. So I usually use smaller bait fish like fat head minnows, and that influences what’s going to hit the hook.”

Small bait fish is on the menu for Mark’s usual fish-of-choice, the yellow perch, this time of year. “In the wintertime, they eat live fish or they don’t eat as much at all,” he says. The change in diet also changes the taste of the fish. “They don’t have that muddy smell or taste as in the summertime, when they’re eating more often and eating more bugs.” 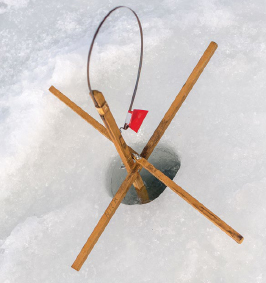 Most days, Mark uses tip-ups to fish the ice; these are popular and handy because they allow one person to fish multiple holes. A tip-up is supported by a plank that crosses over the top of the hole; the plank holds a spool and line with live bait and a flag above that pops up when a fish grabs the hook.

“When your flag goes up, I give the fish a little bit of time because sometimes they just run with it,” Mark says. “If your line’s straight down or if it looks like it went around the corner, that’s a good sign.”

When you’ve hooked one, you can’t let the fish know you’re coming—you have to sneak up on it, giving the hole a wide berth. Then, if you’re using a tip-up, you pull the line in by hand; there is no rod or reel. “It brings out an old tradition, using a hand line. I think it’s important to continue to do,” Mark muses. “You don’t have quite the control and it’s easier to lose a fish, pulling it through the ice by hand.”

More Than One Way…

Even so, there’s more than one way to catch a fish on the ice. Jigging (a technique also used in summer) uses a small rod and reel with a lure, which the angler moves up and down in various rhythms. Mark explains: “It really depends on how much the fish are biting. When they’re not so hungry, you might have to entice them by using a different technique.” Jigging can sometimes be more successful than tip-ups, because you’re actively controlling your lure, but it also limits you to one hole at a time. If you want to fish without leaving the shanty, you’ll jig. 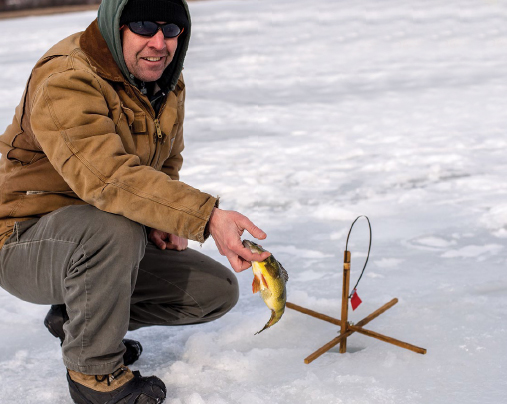 Whether you choose to spend the day on the ice, like Mark does, or retreat to welcoming shelter in an ice shanty, you’ll need plenty of armor against the elements. “It really starts in the feet,” says Mark. You need good boots, with warm insulation and big tread or crampons. Put warm wool socks inside them (maybe even two pairs). Then, layer: long johns or even a union suit, fleece-lined pants, and a parka. Even more essential are a few pairs of very warm, thick gloves—your hands will get wet while you’re fishing, so buy rubber ice fishing ones and have a few spare insulated pairs. Finally, don’t forget to accessorize with sunglasses, a warm hat and a facemask if it’s windy. Mark sometimes brings a portable radio and a camping stove on which to heat up lunch. “You don’t really need a shanty if you’ve got all that,” he says.

Then, there’s the hardware. The Reel Angler in Manchester has everything from augers, tip-ups, bait, and lines to pop-up ice shanties, jackets that float if you fall in and sleds to pack it all into.

Don’t forget to accessorize with sunglasses, a warm hat and a facemask if it’s windy.

If you’re planning to fish the Retreat Meadows, Sam’s Outdoor Outfitters in downtown Brattleboro can supply everything you need, too, including the essential fishing license.

One last indispensible item, says Mark, is a mentor. You might meet one out on the ice (certainly you’ll trade tips and tricks), but if you just want to test the waters, consider going with a guide. In Southern Vermont, Chuck Kashner guides ice fishing trips between January and March on Lake St. Catherine and Lake Bomoseen, among others. With gear, bait and advice provided, it’s a great way to get started on the ice.

Once you’re hooked, run with it— you can travel all over Vermont seeking new lakes and different fish. Mark tells me about burbot, an eel-like fish caught at night in deeper, northern lakes. “That’s a winter camping adventure,” he says. “It’s on my bucket list. There’s just a lot to explore.” ◊

Meryl Robinson is a freelance writer from Brattleboro.