STORY AND PHOTOGRAPHY BY GET OUT AND TREK

This winter, Get Out and Trek adventure group hosts its first-ever Gay Winter Summit at Stratton Mountain, February 21–23, 2020.

“It’s a weekend of gay people coming together to ski, skate, snowshoe, and socialize in Vermont,” says Keith Oberlin, who’s organizing the event through his company, GOAT—Get Out And Trek—a group that serves the LGBTQ community. “That might not seem important, but it’s not always easy for the gay community to enjoy the outdoors and feel welcomed. Events like our Winter Summit create a place where the gay community can get outdoors, feel safe, and feel they belong.”

The Stratton Winter Summit starts Friday night, February 21, with a welcome reception to break the ice. It snowballs from there. Daily breakfasts, group dinners, and a private after-hours party ensure off-the-slopes fun is well organized. On the slopes, Summit guests can pick from group lessons or private runs on a mountain known for its snow and grooming, fast lifts, and a mix of terrain with 99 trails.

Can’t ski all weekend? Can’t ski at all? No worries. There’s skating, cross-country skiing, and snowshoeing to be enjoyed. 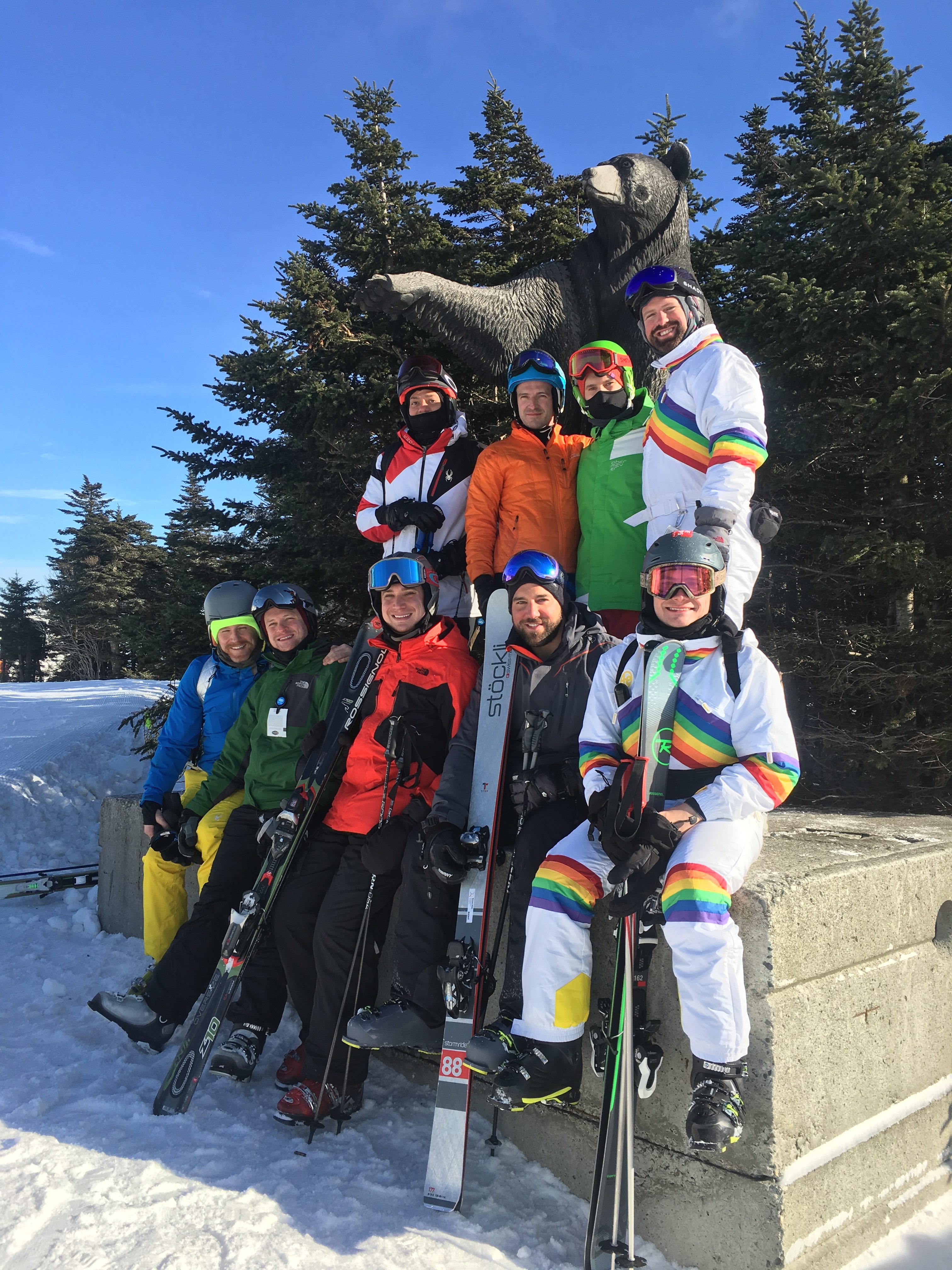 Since its creation in 2017, GOAT has covered the seasons to give LBGTQ people year-round access to the outdoors. Along with winter ski and snowboarding, trips have been organized around climbing, zip lining, biking, rafting, and surfing.

“Gays have a few strikes against them when it comes to getting outdoors,” says Keith. “I know from my own experiences in sports growing up, I never met any other gay people and statistically, we know that can’t be possible. And the gay community tends to be urban. It’s hard to find the great outdoors in the big city. GOAT is about making the outdoors connection easier.”

Bryan Noonan, a financial analyst from Long Island, appreciates that connection. “In theory, when you’re city folk, getting outside is easy to do—if walking in Central Park is your idea of nature. I’ve been skiing, whitewater rafting, and rock climbing with GOAT. That’s my idea of the outdoors.”

Bryan signed up for several GOAT ski trips last year when he was a newbie skier. He’s looking forward to the new season and the Summit as an opportunity to hone his snow skills and to make friends. “Events like the Stratton Summit are important to the gay community,” he says. “You see yourself in a group where everyone has been open to the same struggles and experience of coming out. It’s a feeling of community, with everyone rooting for you.”

Chef Christopher Thomas Jordan lives and works in the New York metropolitan area. He’s chosen GOAT for snowboarding and climbing trips. And even though he belongs to numerous outdoor sports groups, GOAT is a favorite. “GOAT does a good job of finding the best deals, so they’re pretty affordable,” says Christopher. “They’re all-inclusive too, so I don’t have to hunt up tickets or transportation.”

There’s another aspect of GOAT that Christopher enjoys. While he didn’t choose the company just because it’s LBGTQ-friendly, it helps. “At a GOAT event, I don’t feel I need to explain, or out myself, when someone makes assumptions about whether I’m straight or gay. It makes it easier to share experiences.”

As in all GOAT events, time together for the group is planned, and Christopher values those interactions. “Everyone gets to know each other when we meet for lunch and dinner and après ski. And because there’s always a mix of athletic abilities, we make a point of helping each other. It’s very friendly.”

Along with growing friendships on and off the slopes, the Summit is looking at partnerships. Ski-industry representatives will be on hand to demo gear and to show off product lines. That ticks another box on GOAT’s list—introducing the industry to the gay community. As Keith explains, “If we’re part of their market, we need to see ourselves in ad images and sponsorships. This is one way to get to know each other.”

For the 2020 ski season, GOAT plans several gay ski trips throughout New England and to Jackson Hole, Wyoming and Banff, Canada. On or off the slopes, Keith and his husband Ben enjoy Vermont year-round.

“This is where we’ve made our home,” says Keith. “We feel welcome in the Green Mountain State. Vermont encourages individualism. Here, people live their lives and let others—who may be different—do the same. I’m looking forward to showing off that Vermont spirit at our Stratton Winter Summit Weekend.”