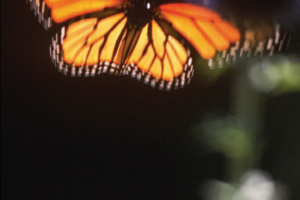 Sometime in early Fall, the monarch butterflies will begin leaving Vermont. Like the other migrating species that have been here for the summer, they have a long way to go. Too far, it seems, for such a small, frail creature. Two thousand miles and more. You can imagine a Canada goose making the journey. It is hardy and tough and built for long flight.

But a butterfly seems too delicate and ornamental. Designed to fly no further than from one blossom to the next, taking a drop of nectar from each.

But the monarchs have even further to travel than the geese. And they have been making the trip for a long time.

They are going to Mexico and will be covering a little less than one hundred miles a day, on average, until they have gone 2,000 miles and more. When they reach their destination, which they find miraculously and unerringly, they will spend the winter living, breeding, hibernating and dying in oyamel fir trees. Thousands of butterflies will attach themselves to a single tree and hang there, upside down, like ornaments. Sleeping.

Come spring, the young, when they have hatched and changed from caterpillars into butterflies, will fly across the Gulf of Mexico but they will not make it this far. They stop, in the southern states, where they breed and die. Then, this next hatch of monarchs resumes the northern migration. This generation stops to breed and it, too, dies off. Finally, its young complete the long flight north. So it is nomadic monarchs from this fourth generation that we see here, in Vermont, which calls the monarch its state butterfly.

It is a long flight, both ways. And each generation, along the way, goes through the transformation from a virtually microscopic egg that hatches into a tiny caterpillar that grows in size until it undergoes that remarkable metamorphosis from caterpillar to chrysalis to butterfly.

Here in Vermont, as it has all along the way, the monarch caterpillar feeds exclusively on milkweed. The plant is no “weed” to the monarch, but life itself, a dependence that puts the monarch in peril.

Milkweed is slowly being eradicated from Midwestern agricultural lands. Also from roadways and other public lands all over the country. The use of herbicides and “supersedes” makes this possible.

So … less milkweed. Fewer monarchs. They are not abundant as they once were. Not here in Vermont or anywhere else in their range.

But they have not disappeared and with luck and some wisdom they won’t. They are too improbably beautiful to lose.