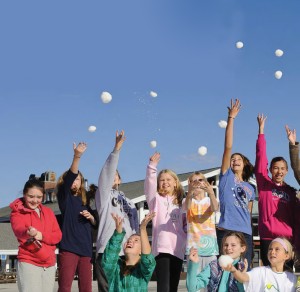 Last February, 15 girls trekked on snowshoes to a log cabin on the new Burr and Burton Academy Mountain Campus in Peru. With three female chaperones, the girls, ages 9 to 11, spent a night in the relative wilderness of the Green Mountain National Forest, with no electricity and a cozy fire for evening light and warmth. They built fairy houses with twigs and stones that they found in the woods; they prepared and shared a communal meal; and they passed around a traditional “talking stick” to share memories and emotions from their lives.

The expedition was more than a one-time camping trip. It was the pilot outing for Unplugged, a nonprofit program founded and led by former BBA instructor and tennis coach Lisa Kelly. Now in its second season, the Unplugged mission is to inspire kids to disconnect from technology—cell phones, laptops, TV and video games—and connect with each other by spending time outside.

“I want to bring back some of my own childhood, the way kids used to grow up,” says Kelly, who lives in Winhall with her husband Paul (also a BBA instructor and coach) and their three children, Connor (age 6), Ryan (8) and Katie (10). In addition to being a full-time mom, she also leads Heartworks, a women’s community service circle that she started several years ago. “I guess it’s a little old fashioned, but my passion is to get kids playing more, communicating better and focusing on something besides electronic devices.”

The idea for Unplugged was sparked in a BBA classroom several years ago. After taking a few years off to be at home with her young children, Kelly had returned to the high school to teach Spanish and coach the girls’ tennis team, which she led to five state championships before retiring after last season.

“I realized I was not excited about teaching in the classroom anymore,” she says. “I found more computers, more cell phones, more technology, more gadgets—and less eye contact, less respect and less communication. I was disheartened by what I saw among the older kids, and I felt I could create something different by using nature as the classroom.” 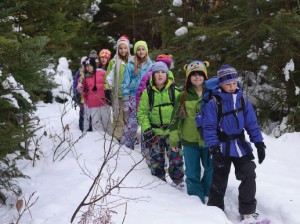 The group trekked through the woods in the
snow.

Kelly started with some ideas that she believed would work. In previous years, she had helped to lead weekend camping trips to the Adirondacks for BBA student leaders. “We would do something physically challenging during the day, like a tough hike, and then we’d sit around the campfire at night,” she says. “I loved seeing these kids transform and connect as a group.” She was also inspired by watching her daughter Katie participate in Girls on the Run, a national afterschool program for girls ages 8 to 13 that’s offered at 125 schools across Vermont. During regular practice sessions, the students not only train for a season-ending 5K race in Burlington, but also work through a fun, interactive curriculum that builds self-esteem, self-awareness and relationship skills.

After brainstorming a bit, Kelly invited an inaugural group of girls to last winter’s camping trip, spreading the news by word of mouth. Six schools were represented, from Mettowee School in Pawlet to Maple Street, Manchester Elementary Middle and the Mountain School in Winhall. The response from the girls and their parents was positive, so Kelly organized more events: a rock-climbing day at an indoor gym in Rutland, a swimming day at Stratton, and two warm-weather camping trips. She also established Unplugged as a registered 501(c)(3) nonprofit organization, developing a logo and Website and Facebook page and opening a bank account. She also recruited a founding board of directors: Randall Perkins, Andrea Ross and Heidi Guldbrandsen Chamberlain. 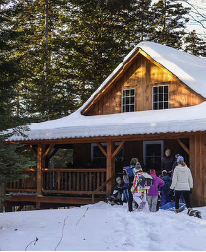 Their destination was Burr and Burton’s new
mountain campus in the Green Mountain
National Forest.

This year, Kelly has established two Unplugged age groups—the Acorns, ages 8 to 9, with 13 girls; and the Willows, ages 10 to 12, with 20—that will each participate in monthly events. Girls who aren’t signed up for the 2012–2013 season can attend if space is available, but the main idea is for the enrolled girls to share bonding experiences over time. The line-up includes a low ropes course, hiking and camping, canoeing, yoga and fitness classes, arts and crafts, cooking and several overnight wilderness trips. Kelly will also incorporate some curriculum from the Girls’ Leadership Institute, which she attended in October in Boston. All of its activities are aimed at empowering young girls and teaching them to be authentic. “They’re playing games, basically,” she explains. “But while the girls are having fun, they’re also learning about taking risks, being a leader, and not being afraid to reveal who they really are.”

In these early stages, Kelly is partially subsidizing Unplugged with her own money and has set an affordable fee of $250 per girl for the 12-month season. She hopes that fees will fully support the program soon—covering expenses like insurance, activity costs and the meals she provides, and eventually a reasonable salary for herself. She also hopes to attract grants and donations for scholarships. “I don’t need tens of thousands,” she says. “Five thousand dollars would cover my costs and help to keep it affordable for girls.” For this year, she says she’s just “focusing on the program, developing the curriculum and learning how to do it right.” Future plans include adding more groups, expanding the age range, and possibly offering the program to boys.

Ellen Russell of Pawlet is a big fan of Unplugged; both of her daughters (Piper, 10 and Rowan, 8) are enrolled this year. “We’re already an unplugged family—my girls don’t have iPods or cell phones, and TV is banned all summer, for example—so this fits with our belief system,” she says. “The coolest thing is that girls from different schools, all over the region, are making connections face to face, instead of ‘meeting’ over the Internet.”

“The most important thing we’ve learned is building friendship,” says Piper. “The whole idea is to get outside—with no electricity!—and learn how to trust and meet new people.” 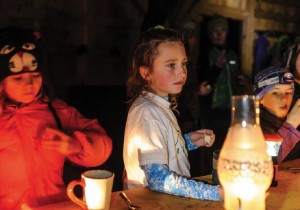 “The whole idea is to get outside—with no electricity—and learn how to trust and meet new
people.”

“Every single game is a lesson,” adds her sister, Rowan. Trading sentences, the girls describe a game, held during an Unplugged meeting in September, when each girl was asked to fall backwards off a low platform and trust the group to catch them. “Everybody tried it, but one girl was really nervous and didn’t want to take a turn,” said Piper. “But before we left, she did!” adds Rowan. “We caught her. And then we all clapped.”

“More than half of the girls I didn’t even know before,” says Sage Lalor, a sixth grader at Manchester Elementary-Middle School. “But now they’re my friends, and we’re learning how to do things like send each other real letters and call each other on the phone. When you send someone a text or an e-mail, they can’t hear your voice and they can’t always tell how you feel. We’re learning how to meet people: How to really meet them. How to actually hear them.”

“For parents, this program is a no-brainer,” says Sage’s mom, Abby. “It gets the girls out of their comfort zones. It builds confidence and broadens their sense of community. Lisa isn’t just unplugging our girls. She’s rewiring them, and connecting them in ways that they weren’t connected before.” ◊

Kathleen James is a freelance writer from Manchester.