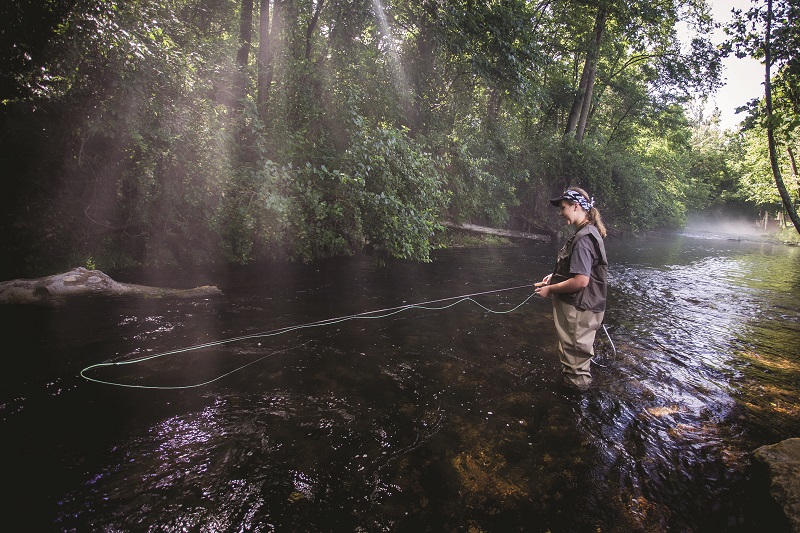 Arlington angler Seline Skoug started fly fishing with her two granddads when she was just 10 years old, but for many years she felt like she was the only girl on the river.

“Those two gents put me out there and there weren’t a lot of women around,” she said. “Maybe back then the women were home watching the kids and they didn’t have as much time to fish as the men did. It was a cultural thing and that is changing with time.”

Indeed it is. Fly fishing has long been known as the sport of gentlemen, but in recent years the ladies have splashed down in rivers and streams in droves, making them the fastest-growing demographic in the sport. According to a 2016 study by the Recreational Boating & Fishing Foundation, more than 2 million women cast a fly rod that year—an increase of some 142,000 from 2015. Women now account for about 31 percent of the 6.5 million Americans who fly fish.

“In the last five or six years the whole industry noticed an exponential rise in the number of women who fly fish,” said Orvis angler Jackie Kutzer. “They were coming from all different avenues, young families who got their daughters started, 20- to 30-something women looking for an adventure, and middle-aged women who want to try something new.”

And according to Bob Young of Young’s Flyfishing guide service in Arlington, women often are better anglers than men.

“Women have more patience,” he said. “As a male, you know, we’re gonna jump in there and we’re gonna catch these fish. Women are more observant. They pay more attention to what the guide is saying. I wouldn’t ever bet against the women, because 95 percent of the time, they’ll come out on top.”

Manchester fly-fishing guide Ray Berumen likes to run a contest when he takes couples out on the river to see who will catch the biggest or the most fish. “Last year I had 34 couples and with 28 of the 34, the women won,” he said. “I even had one husband accuse me of favoritism. He said, ‘You’re putting them in the better spots!’”

A big obstacle for years was the lack of equipment designed specifically for women. Needless to say, with the increasing numbers of ladies on the water, the sporting-goods industry took notice. Major outdoor retailers designed new fishing gear specifically sized for women and now offer female-centric apparel such as ultralight waders, colorful shorts, shirts and jackets, and even snazzy sling packs. And beginning last summer, Kutzer and co-worker Chrissy Atkins, pioneered a new push for Orvis called 50/50 On the Water. Their mission is to bring more women into the sport with an eye toward having an even fly-fishing gender split by 2020. To that end, 50/50 is offering women-only fly-fishing classes and the company is showcasing real women anglers. 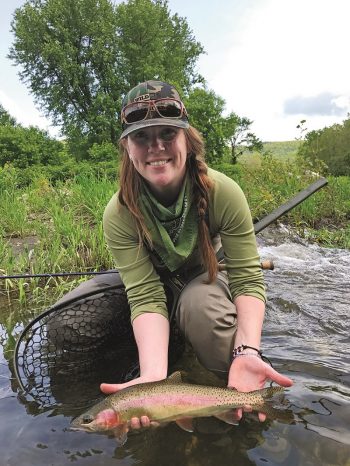 “We’re trying to change the perception away from old-school tweedy guys,” Kutzer said. “We’ll feature real women of all ages, skill levels, sizes, and ethnicities so that women can see others like them doing it and know that they can do it too.”

Atkins and Kutzer also recently established a New England chapter of Braided, a group that focuses on connecting women anglers to “learn, travel and fish together.” Although men are welcome too, Atkins said it’s fun to fish with just women because they seem to embrace different aspects of the sport than the men.

“They get just as excited about watching the current, what the fish eat, what bugs are hatching, and even watching the birds,” she said. “It’s also a great chance to get outside and socialize with other women. But just like the men, they love catching fish. The tug is the drug.”

“After breast cancer surgery, where they would go in and remove the lymph nodes, exercises were prescribed that seemed similar to casting motions,” said Sunderland angler Margot Page, a founding member of the group. “This was a huge light bulb [moment] and Casting for Recovery was born.”

The program originated in Manchester 23 years ago and has since spread to 48 states. Seline Skoug, another founding board member, became involved after her mother Sally was diagnosed with breast cancer.

“Seeing my mother fly fishing, she really came full circle,” she said. “It helped her mental space even as she knew she was dying. Fly fishing just gives these women a sense of respite. It’s spiritual out there on the river. We got letters from husbands, kids, grandmothers saying it was the first time they’d seen their loved one happy in years. It brings tears to your eyes.”

Any way they find it, women are embracing fly fishing and the sport’s fuddy-duddy image seems destined for extinction.

“I think fly fishing is a wonderful sport for women,” said Dagmar Neubauer of the Reel Shooter sports shop in Manchester Center. “It doesn’t require a lot of strength, it gets you outdoors to see some amazing wildlife and scenery. You get to breathe real air. And there’s a tremendous camaraderie whether you are out with friends or with your spouse. At the end of the day, people come back and they really do talk about every fly, every hookup, every one that got away.”

And as the sport transitions from its tweedy past to a time when there are just as many women wading into rivers as men, one thing remains constant: The fish really don’t care who is on the other end of the line.