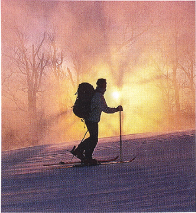 Once, during my first few years of mountain climbing, I found myself standing in near total darkness on a steep ice face in the French Alps. It was the 25th hour of what was to have been a 12-hour climb and I was waiting for my two climbing partners to follow. Cold and tired, half asleep from exhaustion, I watched my partners’ rope moving slowly through the safety device in front of me. Suddenly, a faint light began to shine off the ice around me. The glacier and its crevasses became visible out of the darkness below. As I turned my head to the east and the pale pink horizon, the numbness in my hands and feet was replaced with the sensation of hope and belief that I would make it off that mountain alive.

Hours later when we reached the valley and were able to take off our boots and socks, even the the touch of the wool against our bare fingers was painful.

Now, from time to time, I climb Stratton Mountain in the winter and try to catch the twilight as it rises or fades from the summit. To be atop the mountain in that light, cold and alone, brings back the memory of that morning and many others that followed. I can feel that light in my soul. That light is one of the reasons I began taking photographs.