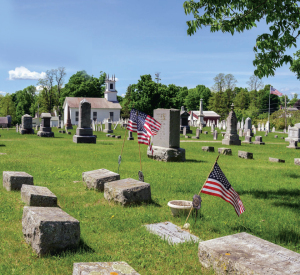 The historic cemetery in Shaftsbury

When I’m away from Vermont and tell people where I live, I’m usually met with rapturous sighs. “Oooh! How lucky you are,” they say. And they’re right! I love where I live and enjoy driving around this splendid state. But so many people zoom through in a hurry, not absorbing the manifest beauty of the natural scenery, farmlands and towns they’re passing or passing through. I recently drove from Pownal to Hubbardton along Routes 7A and 30, two of Vermont’s National Scenic Byways. The NSB Program was established in 1991 to maintain and show off scenic roads that are traveled less frequently than major highways. It is administered by the Federal Highway Administration and in Vermont by the state transportation department.

Vermont boasts 10 scenic byways, with individual themes that characterize each town; I traversed the two on the southwest side of the state: the Shires of Vermont Byway, 76 miles from Pownal north to Manchester on Routes 7 and 7A; and the 30-mile Stone Valley Byway from Manchester to Hubbardton along Route 30. It was a self-propelled sightseeing trip on well-maintained roads, but the traffic moves slowly enough for a good look-see, with many opportunities to duck off for picturesque views or into lovely towns and hamlets, each with its own personality, all calling out, “Vermont!”

Most of the towns, with classic white clapboard and red brick buildings, historic churches and monuments, village greens, locally owned stores and, in the warm weather, produce stands and farmer’s markets, were chartered in 1761 and have retained their historic aura. The area I covered offers more delights than I could absorb in a single trip: historic places, cultural venues, arts and antiques shows, agricultural and scenic views, sports opportunities, wildlife areas, shopping and commercial establishments. And for good eats, locally owned general stores and cafes for a tasty homemade meal or just a snack.

So many of the people who settled western Vermont, including the Ethan Allen family, entered from Massachusetts and Connecticut along the Shires Byway route, which starts south in Pownal. Here Route 7 is a main thoroughfare, but you can zip off to the west and follow the Hoosic River, overlooking a broad agricultural valley, to the small villages of Pownal, North Pownal and Pownal Center, then back onto 7 to Bennington. Just short of downtown Bennington is Old Bennington, picturesque site of well-preserved historic 18th century buildings and Bennington’s Old First Church; the grave of Robert Frost and those of many colonists and British who died at the Battle of Bennington on August 16, 1777, are in its cemetery. At the end of a beautiful street lined with large trees and gorgeous old houses is the Bennington Battle Monument, the tallest structure in the state at more than 306 feet, which looks toward the actual location of the battle just over the New York border. Visit between mid-April and the end of October to take an elevator for magnificent views. There are also three covered bridges in Bennington; a Covered Bridge Museum as well as local art and craft galleries; the exceptional Bennington Museum, home of many paintings by Grandma Moses; Bennington College; and, for entertainment, the Old Castle Theater Company.

Leaving Bennington on Route 7A, see the home of Robert Frost and historic buildings in the charming Shaftsbury Historic District, including a house that was a stop on the Underground Railroad. The lovely route wends its way to Arlington; the Green Mountains are to the east, with views of woods and bucolic meadows and farm stands, including the vegetable gardens of Clear Brook Farm. In the summer, stop at Lake Shaftsbury for a swim and picnic. 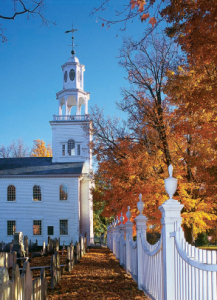 Next is Arlington, another town filled with history. Ethan Allen and his brother Ira lived there (as well as in Bennington) as did, much later, Norman Rockwell and the writer Dorothy Canfield Fisher. A side trip east winds toward the Green Mountains, then turns north on Dunham Road over the Chiselville covered bridge to Hill Farm Road on your left (look sharp or you’ll miss it!) and heads west back to Route 7A past a very old cemetery (there are many of these in each town and well worth a stop to read early tombstones) with a great view of Mount Equinox, the tallest mountain in the Taconic range. Another splendid side trip east on Kelley Stand Road leads all the way up to Stratton Mountain, although access is closed in the winter. Whenever I drive this curving, unpaved wooded trail along the Roaring Branch River, with its many little waterfalls and aptly-named rumbling waters, I feel as though I’m in a fairytale, expecting to see Little Red Riding Hood around the next bend. Keep this in mind for a future trip, as Kelley Stand Road is still being repaired from devastation wrought by Tropical Storm Irene in 2011. For hikers, investigate the section of the Appalachian Trail, here called the Long Trail, that runs more or less parallel to Route 7A nine miles to the east. For a nice side trip to the west, turn onto Route 313 just north of Arlington village and cross the covered bridge that leads to Rockwell’s former home (now a B&B) on a lovely unpaved road that parallels the famed Battenkill River, one of the best in the east for fly fishing; back on Route 7A, you can rent a canoe for a peaceful glide or tube ride on the section between Arlington and Manchester. 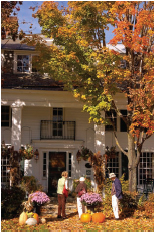 The Dorset Inn in autumn splendor

In Manchester, the Stone Valley Byway begins, stretching between the Green Mountains to the east and the Taconic Mountains to the west. The name comes from the many old marble and slate quarries and mills along the route; marble was so common in the 19th century that some of the towns, especially Manchester and Dorset, still have marble sidewalks. (The New York Public Library on Fifth Avenue and the Harvard University Medical School are built of Dorset marble.) Manchester and Manchester Center are many-faceted tourist towns, where choices to stay, eat and shop abound. But also visit Hildene, the 412-acre estate of Robert Todd Lincoln, Abraham Lincoln’s son, enjoy a tour of his Victorian home/ museum and attend one of the frequent Civil War conferences; the Southern Vermont Arts Center, as well as several art and craft galleries; the Manchester Music Festival; the American Museum of Fly Fishing; and hike up Mount Equinox or ice skate year round at Riley Rink.

Here the Byway turns onto Route 30 into Dorset, a lovely village with well-preserved colonial-era houses that is on the National Register of Historic Places. 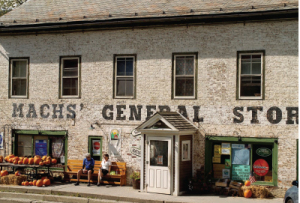 By 1918 most of the marble quarries had closed, but you can swim in the popular Dorset Quarry on Route 30. Dorset, with a well-stocked historical society museum, has long been an artists’ colony; the Dorset Playhouse operates year long. You are now in the eastern portion of Rupert, a mainly agricultural and wooded town with many hiking, riding, biking and snowmobiling trails. A turn west onto Route 315 will take you to the non-profit Merck Forest and Farmland Center, which features school based and environmental education programs, a working farm (and farm stand), rental cabins and trails for hiking, skiing and snowshoeing. Continue into Rupert and take a side trip on Route 153 toward West Pawlet to visit Consider Bardwell Farm, which was the first cheese factory in Vermont and has been revived to produce award-winning cheeses. In the spring many area sap houses welcome visitors to watch sugaring-off. Back on Route 30 north, where the lush, fertile Mettowee Valley widens, you’ll see a plaque identifying the site of the Harmon Mint, which produced coins for the short-lived Republic of Vermont. The Battenkill drains out of the Dorset Marsh here, and Route 30 now follows the Mettawee River, another fine fishing spot, through Pawlet.

In the 1800s the slate industry brought prosperity to Pawlet, West Pawlet, Wells, Poultney and over the New York border in Granville, which houses an excellent slate museum; keep your eyes open as you drive for old buildings, often barns, with colored slate roofs. Out of Pawlet Route 30 narrows, with Haystack Mountain to the east, then the valley narrows further through Wells. Soon you’ll drive along the eastern shore of Lake St. Catherine, lined with small cabins and a state park and swimming area. In Poultney, turn west onto the wide main drag, its local businesses in former Federal-style homes, ending at Green Mountain College, a small private liberal arts institution with an emphasis on environmental studies. In the 1820s, bustling Poultney was the home of famed journalist Horace Greeley and his colleague George Jones, co-founder of the New York Times in 1851. 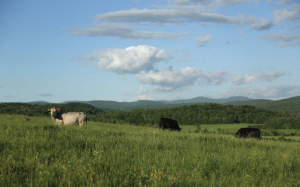 Hubbardton, site of the only Revolutionary War battle fought on Vermont soil. Photo by Lincoln Benedict

If you’re interested in architecture, Castleton is also worth a side trip east off Route 30. The home of Castleton State College, it has many Federal-style buildings in three districts on the National Register. Three miles north on Route 30 is Lake Bomoseen, the largest lake entirely within Vermont’s borders, a vacation, fishing and boating destination with many charming homes along its shores and a state park with a public beach. My drive ended at the Hubbardton Battlefield, the site of the only Revolutionary War battle, fought on July 17, 1777, that was actually fought in Vermont, by the Green Mountain Boys led by Seth Warner. They then made their way down present Route 30 (which since 1933 has been called the Seth Warner Memorial Highway) to the Bennington area for that fight. The Battlefield, in pristine condition, is six miles to the east on a well-maintained wooded road, at the top of a mountain with grand views of the Adirondacks and the Taconics. The battle is described in a diorama and narration with 3D map at the Visitor’s Center, open from late May to Columbus Day; as you walk through the site, helpful signs explain the logistics and history of the battle. An exceptional end to an enjoyable trip.

Stone Valley citizens, historical societies, chambers of commerce and regional planning associations provided guidance in preparing information which is now displayed on small monuments erected in many towns on the route. All are made of local material—stone, marble, slate— on property donated either by the towns or individuals.

Jonah Spivak of Bennington is co-chair of the Shires Byway committee, although he says much of the credit for developing the plan goes to Paula Maynard of Hildene. He told me that for eligibility, the road must be recognized by the US Department of Transportation for one or more of six “intrinsic qualities”: archeological, cultural, historic, natural, recreational and/or scenic. The two Byways I traveled certainly meet these criteria.

For maps, brochures and guidance from a helpful staff, stop at the two new Visitors Centers: in Bennington on Route 7 north of downtown and in Manchester Center on Route 30, just after the turn off of Route 7A; or visit the Vermont Scenic Byways website or individual town websites. You’ll have a wonderful time! ◊

Louise Jones is a senior writer for STRATTON MAGAZINE.