Fun, n. Something that provides mirth or amusement, enjoyment or playfulness.

Arcing turns over the corduroy or catching air is always invigorating. Always, that is, except when we fall hard enough to get hurt. Skiing and snow- boarding have inherent risks. We all know that, yet the risk is part of the allure. We seek the adrenaline rush that comes with gliding fast on snow, sometimes more than 40 miles per hour, or flying briefly above it, but regardless of how we get our ya-ya’s on the slopes, one thing we all share is our wish to avoid a ride to the clinic on a ski patrol toboggan. Stratton Mountain Resort does, too, and does everything it can to keep its guests in one piece. It’s doing a good job. The National Ski Areas Association (NSAA) awarded Stratton its 2014 award for “Best Overall Safety”.

“It’s the big one we’ve been shooting for!” says Seth Boyd, Stratton’s Safety and Risk Manager, “There wasn’t one thing that allowed us to win. We continually expand what we’re doing to reduce risk around the resort.” 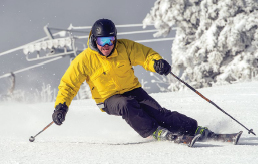 A National Example
The I.C.E. (“In Case of Emergency”) program implemented by the ski patrol and the Carlos Otis Clinic is one way Stratton sets itself apart from other winter resorts. Guests voluntarily register on-line at the clinic’s website. If that person is injured on the slopes, a sticker on his or her pass alerts the clinic, bypassing paperwork and insuring the person’s family knows quickly of the injury. Over 5,000 people have signed up for I.C.E.

But I.C.E. only eases the treatment process, it doesn’t prevent injuries. Stratton depends on outreach for that, all winter. However, during January, National Skier Safety Month, the mountain ramps up its effort to reduce skier and snowboarder risk on the slopes.

“During January, we promote the Skier Safety Code, and we enhance the effort to keep trails like Easy Street, a family zone,” says Boyd, “If someone is too fast around young kids, we ask them to slow down. We put 50 volunteers from our Safety Patrol on the mountain. Our goal is to prevent injuries. We want traffic to flow at a comfortable pace and encourage ski- ing etiquette rather than set up speed traps.”

Stratton was awarded the 2014 NSAA Award
for Best Overall Safety.

Stratton Mountain Resort has been at the forefront of skier safety since 1978 when the Vermont Supreme Court awarded $1.5 million plus legal fees to James Sunday, a 20-year-old novice skier who became a quadriplegic after falling at Stratton. Sunday claimed the mountain was negligent at maintaining its slopes and failed to warn skiers of hazards. The actual accident occurred four years earlier, in 1974. While travelling down the side of a beginner trail, Sunday’s ski caught in a clump of brush concealed by snow. He lost control, went off the trail and hit a boulder. The ensuing court decision favoring Sunday avalanched throughout the ski industry, causing many smaller areas to close due to skyrocketing liability insurance. It also created a higher level of attentiveness to skier and rider safety among mountain managers.

“Sunday versus Stratton is still referenced in skier liability cases across the industry,” says Boyd, “It’s a catalyst for the awareness and care that resorts take today. We want people to have a good time and to come back tomorrow.”

In reality, a ski resort cannot guarantee a good time or safety, but it can do a lot to achieve both goals.

“Our goal is to prevent injuries. We want traffic
to flow at a comfortable pace and encourage skiing etiquette rather than set up speed traps.”

“Safety is tops in the big picture. Priority number 1!” says Sky Foulkes, Stratton’s President and Chief Operating Officer, “We concentrate on taking care of what’s in our control and our guest’s control, such as the slopes and the gear we rent, and on mitigating what’s out of our control. In the end, you can’t manage everything. You can’t be safe in the true sense of the word and have fun on a mountain. Risk is part of the fun. Our job is to educate guests, so they know the risk.” 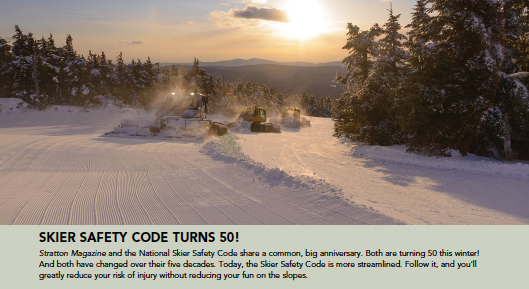 Foulkes points out a number of aspects of skiing and snowboarding that a person can control and thus lower their risk of injury including being in shape before arriving, learning proper technique, having current gear that’s properly sized and adjusted, and wearing the right clothing. He also strongly advises against someone heading to terrain before they’re ready.

“Like other sports, skiing and snowboarding have a progression of learning,” says Foulkes, “Don’t jump to the top right away… Mitigating risk is less about wagging a finger and more about following rules. If you practice safety, you can come again tomorrow. It’s a simple but powerful statement that has always resonated with me.”

Foulkes also emphasizes good athletic practices that apply to all sports such as warming up with a couple of easy runs before ripping the bumps, eating nutritiously, staying hydrated, and knowing when to quit for the day, as keys to both having fun and avoiding injury.

Helmets
Perhaps the piece of gear that’s most associated with safety is a helmet, but a hard plastic lid is not a license to go faster and fly higher. The average ski helmet is rated for crashes under 15 miles per hour. That said there’s no downside to wearing one.

“Helmets provide a limited amount of protection,” says Dave Byrd, “Director of Risk and Regulatory Affairs for the NSAA, “There’s a limit to the technology, but since helmet use has increased on the slopes, head injuries, particularly fatal ones, have declined. Our view is wear one, but ski like you’re not.”

Stratton has always encouraged helmet use among guests and employees and has close to 90 percent helmet use among skiers and riders, including 100 percent voluntary use among its on-hill staff. “We strongly encourage leading by example,” says Boyd, “We deeply discount helmets to all employees and their families, including off-hill staff such as housekeepers and people in food service. We also offer discounted rentals and discounts on helmets for sale to guests. Young kids can’t remember skiing without them.”

The Grooming Dilemma
Helmets are not the only thing giving skiers and riders more confidence on the mountain. Improvements to skis and snowboards, boots and bindings and better grooming have made it easier to turn and offer a smoother ride on tougher slopes. As a result, people are traveling downhill faster than ever before adding to the thrill. It’s a rare skier or rider who doesn’t plant a big grin on his or her face at the top of a perfectly groomed trail and then lets it rip. But therein lies a dilemma. State-of-the-art grooming has made the slopes more predictable and safer by eliminating hazards such as patches of ice and clumps of snow, but everyone is going faster. The correlation between higher speed and higher chance of injury is undeniable. What’s more, many people don’t realize they’re going too fast.

“Grooming and technical advances in ski equipment are one of the challenges in the industry,” says Foulkes, “People ski above their ability level. On the bright side, skiing is more pleasant, more approachable, less intimidating. Through the snow school process, we teach guests how to use their gear appropriately and how to ski or ride within their own bounds. But safety and grooming are not 100 percent reconcilable. Ultimately it comes down to the judgment, decisions and actions of the skier or boarder.” 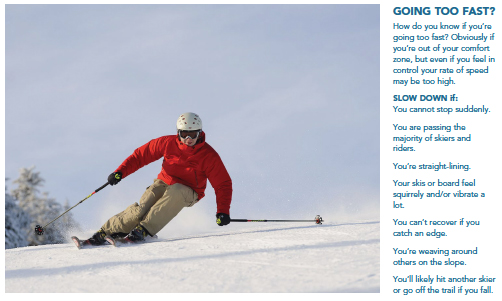 Terrain Parks
Interestingly, there is no evidence at Stratton or nationally that terrain parks are increasing the overall rate of injury on the slopes. In fact, at Stratton, injury rates have decreased and, as most park users would attest, the fun factor is much higher, thanks to the S.E.S. Pass program and changes in park design.

“We funnel only those into parks who are there for its intended use,” explains Boyd, “The level of risk was much higher when Mom, Dad and small kids, who wanted to watch but didn’t know where to stand and were going slow, were in there. We’re also building smarter.”

After extensively studying its terrain parks, the resort determined four factors—speed, the maneuver itself, the pop off an element and snow conditions—were the biggest components from a safety perspective. As a result, big jumps and big pipes have been replaced with smaller but more challenging jibs and hits.

“Skiing and snowboarding are sports with inherent risk because they involve sliding down mountains on snow,” says Foulkes, “If you take a narrow view of the situation, having fun and being safe are mutually exclusive, but in the broad sense, both are part of participating.”

Risk and fun are what makes skiing and snowboarding appealing, yet no one wants to get hurt. And most of us don’t. Fortunately, we find a balance between the two every time we get off the chairlift. ◊

An Emmy-winning television producer, writer and photographer, Lisa Densmore Ballard is a long-time Stratton skier. She graduated from Stratton Mountain School in 1979 and served on its board for over 15 years. Nothing brings a bigger smile to her face than fresh corduroy on Stratton’s North American trail. www.LisaDensmore.com