At the top of the halfpipe—a 13-footer—a crowd has gathered. There are jokes, greetings from old friends, boasts from younger riders, all spoken to kill time while waiting to hear their number called to line up. A few jostle to look down the slope, catching a glimpse of the pipe laid out below on Suntanner.

It could be a scene from one of the early U.S. Snowboarding Opens, and in fact, many faces from those days are there: Steve Hayes, Ross Powers, Seth Neary. But now, their children are also waiting with them above the pipe to drop in, as are 170 other pro and amateur riders competing at the inaugural Vermont Open. 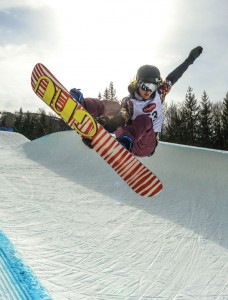 On the “traditional” St. Patrick’s Day weekend, Stratton’s Suntanner trail has become a maze of sculpted snow for the Vermont Open. The halfpipe dominates the left side, the banked slalom course snakes down the right and the bottom is dotted with rails for the rail jam.

“We wanted to bring back a truly open competition where riders of all ages and from all categories, amateurs, juniors, pro and washed up, could compete together in one arena,” explains Steve Hayes, a former professional rider and one of the organizers of the Vermont Open.

At the inaugural Vermont Open, jibbers mingled happily with riders more accustomed to a banked slalom course than a terrain park, while parents compared their scores against their kids’.

Hayes’ son, Jack, competed in the junior division. “There were multiple sets of parents and kids competing,” he said. “Powers, Cavanagh, Gage—how often do you see that? It was a really rare, special moment.” 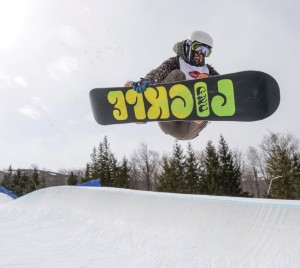 A successful blend of snowboarding’s past, present and future required a mix of on-snow events that revealed the breakneck speed of the sport’s evolution.

Less than 30 years ago, when Stratton first hosted the National Snowboarding Championships in 1985, there was no halfpipe, no rails. The winner was the rider who got down the hill first, battling finicky equipment and New England snow conditions. Through the late 80s and 90s, small halfpipes were introduced and riders raced through gates on banked slalom courses. Today, a 13-foot pipe is dwarfed by the 22’ superpipes of the X Games, banked slaloms are popular “throwback” events and many riders prefer to get creative at rail jams.

The Vermont Open brought all those elements together, creating a venue where riders of any background, age or experience could ride together. The most talked-about event was the banked slalom, a.k.a. the Washed Up Cup, and many of the older generation turned out to cheer on the rail jam. Quite simply, that was the goal: getting East Coast snowboarders together again.

It was the brainchild of Londonderry natives Steve and Mike Hayes and their group of once-pro snowboarders. The Vermont Open began as the “Washed Up Cup,” an annual banked slalom race held by Stratton’s resident once-pro (or “washed-up”) riders. After the U.S. Open’s move to Colorado, Hayes felt that the local competition scene lacked opportunities for talented young riders to truly compete on the same snow as professional snowboarders. It was an opportunity to take snowboarding back to its roots, or rather, take its roots—the passion, the innovation, the scrappy determination—back to snowboarders on the East Coast. To draw both washed-up riders, current pros and talented amateurs, a rail jam, halfpipe and big air contest joined the Washed Up Cup for the Vermont Open. 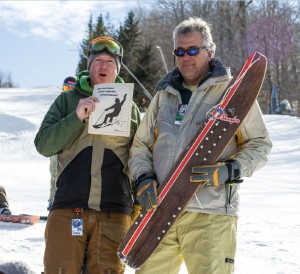 Well-known riders, including US Open champs Seth Neary and Andy Coghlin, served on the VTO’s advisory board, helping much of the character of the early days reappear at the Vermont Open. People speculated whether the legendary beer kegs would be reburied in the halfpipe wall. Music pumped through the base area and late night parties from bands like Gold Town and Barry and the Penetrators. Riders were so dedicated that, in the face of course delays, the big air competition ran until sunset, with riders hiking or catching snowmobile rides in frigid temps.

The spirit was catching, to the audience and to the riders. “The fun factor was really high,” remembers Hayes. “It wasn’t about qualifying for the X Games, but having fun together at something really special.” Hayes even brought champion snurfer Paul Graves back to host the Snurfer Challenge—a straight-shot downhill race on the snowboard’s early predecessor, much like what would have been seen back in 1985. 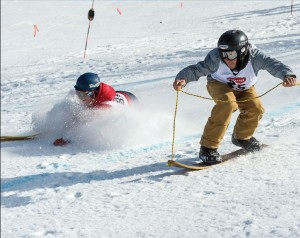 For pro riders like Josh Wylie, Powers and Tyler Emond, the Vermont Open was a chance to catch up with old buddies and renew some old rivalries. “The three of us grew up around here, so it’s pretty fun to have an event where we can all ride,” said Wylie, who placed first in the banked slalom, men’s pro division.

Many returning riders were both competitor and coach, since the children of these Stratton legends came out in force. Powers, for instance, shared the halfpipe podium with daughter Victoria, both taking first in their categories, begging the question: is snowboarding genetic?

Whether a love for the sport is born or bred, it’s clear that the Vermont Open both passed a torch and lit a spark for young riders. The VTO was a first chance to compete for riders like 12-year-old Oscar Loomis. “I’ve always wanted to compete— I’m like, yay!”

This year, organizers—a cross-functional team of Hayes, the Vermont Open advisory board and Stratton’s event staff—plan to streamline the event schedule so more time can be devoted to the halfpipe, rail jam and banked slalom events. Live music will become an even bigger component this time around, thanks to continuing involvement from local bands and mainstays from the old days.

It’s this nod to tradition while embracing the future that made the Vermont Open a singular event in Stratton’s storied snowboarding history. Stratton still stands with an exceptional riding community of boarders—and skiers, for that matter—who helped shaped the mountain’s history, as much as they were shaped by it. Pros, amateurs, washed-ups and their kids still call Stratton “home.” They’ll be welcomed back for the Vermont Open for years to come.

Meryl Robinson is a free lance writer living in Brattleboro. 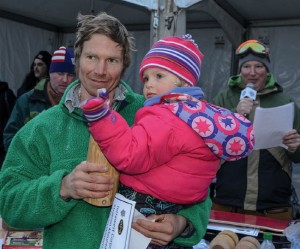 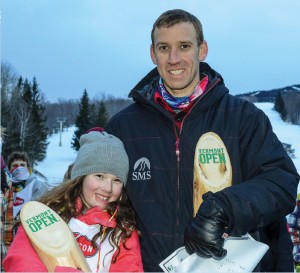