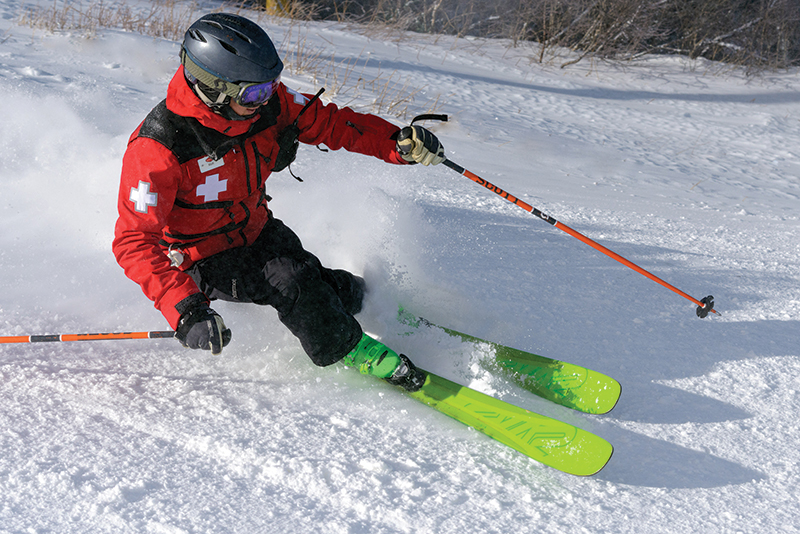 They’re part skiing fanatic, part first responder. They’ve bandaged cuts, found lost skiers, comforted crying children, and have been the first on the scene for serious situations. You’ve seen them on the chair lifts or monitoring the trails in their red parkas with the white first-aid crosses. The Stratton Mountain Ski Patrol is as essential to the resort as snow on the slopes, working tirelessly all season long to make the mountain safe for thousands of skiers and riders.

“We have a huge team of paid and volunteer staff on the ski patrol and it’s really a loyal and passionate group,” said Stratton Environmental and Safety Manager Jeffrey Cavagnino. “We’re lucky to have such dedicated patrollers who want to be out there doing a great job.” On busy days some 30 ski patrollers and another dozen of the 35-member, all-volunteer safety patrol are on the mountain performing a range of duties.

A typical day begins in the ski patrol headquarters with a morning meeting for all the staff led by Ski Patrol Director Chris Schilling, who came to Stratton 20 years ago right out of The University of Massachusetts Amherst. “I have a little speech prepared and we go over things like logistics, where snow has been made, what trails got groomed, what didn’t, any type of closures or openings that are different from the day before, weather, that kind of thing,” Schilling said. “Then we head out onto the mountain.” They assess conditions, check that signage and lift paddings are intact, and close any terrain that seems unsafe. And veterans know that, on the first run of the day, you sometimes encounter the unexpected. 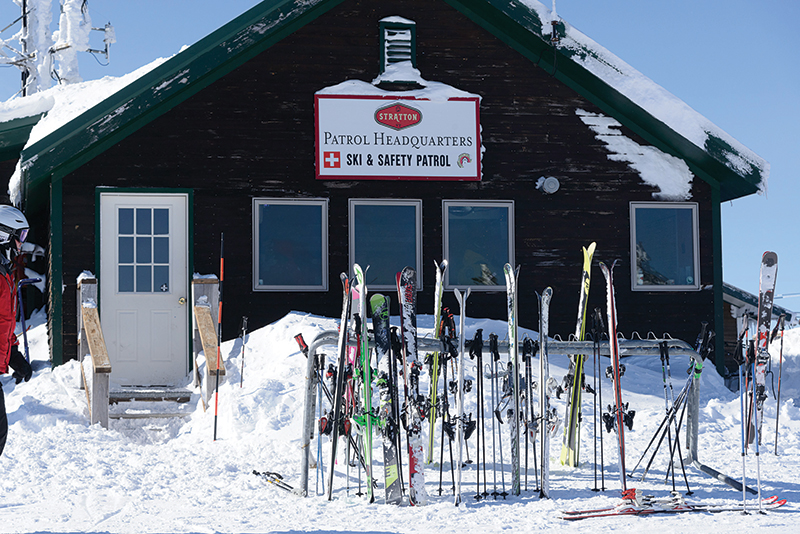 “It was first thing in the morning on the Drifter trail and I was headed out there with a couple of sticks of bamboo to mark hazards,” Schilling recalled. “It was a beautiful day: clear, no wind, and it had snowed a couple of inches the night before. I was cruising along, enjoying myself, and I came around a corner and there was a giant bull moose just standing in the middle of the trail. I came to an abrupt stop about 20 yards uphill of said creature and it was a standoff. I was looking at him. He was looking at me. I stood there for a few minutes, trying to decide what to do. I ultimately called dispatch, had them close the trail, and on the count of three I took off skiing as fast as I could. The trail was only about 50 feet wide, so there wasn’t much room between me and that moose. As I passed by, he turned his head, slowly looked at me, and then trotted off into the woods. I’ve seen a lot of things over the past 20 years, but that one was really something.”

Being on ski patrol comes with a skier or rider’s dream perk: getting the first run down the freshly groomed, or newly powdered, trails. “Personally, that first run of the day is as rewarding as anything I’ve ever done; it’s what keeps me coming back,” said Assistant Ski Patrol Director Mike Anderson, who is in his 29th year as a Stratton ski patroller. Anderson, now 54, joined the Stratton Ski Patrol in the late ’80s, and for him, it was a dream job. “To be a male in your 20s and be a ski patroller, that was pretty much it,” he said. “It was all about meeting girls, staying out late, skiing all day, and getting paid for it!” 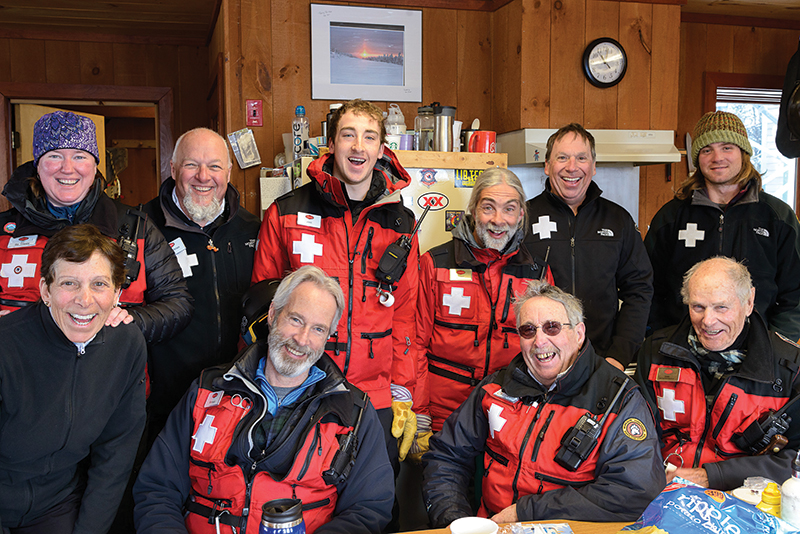 In Stratton’s early days there was still a heavy Austrian influence at the mountain, Anderson said, not only in the architecture but on the staff of the ski patrol and ski school. “Austrians really taught Americans to ski and at Stratton there was a real Austrian identity, that whole early ski haus vibe,” he said. “It was fascinating to listen to some of the old timers, who had been on the patrol since the ’60s, talking about the days of leather boots and wooden skis. It was great to get that historical point of view.”

Dick Massucco joined the patrol in 1972, and now at 80 he is Stratton’s oldest active ski patrol member. Known for his rabbit fur hat with the ear flaps and hammer-and-sickle pin, Massucco works exclusively in the first aid room at the Carlos Otis Clinic since an injury curtailed his skiing a few years back. Massucco, who just got his 60-year pin from the National Ski Patrol system, said he hopes to keep working at the mountain “as long as the good Lord keeps me going.” He said the camaraderie with fellow ski patrollers is what keeps him coming back season after season. “I’ve made some great friends over the years and we used to raise a little hell,” he joked. Like the time in the ’70s, during the height of the streaking fad, when Dick and a ski patrol buddy decided to crash one of the Stratton Mountain Boys’ Tirolean parties wearing just their ski boots. “It was quite an eventful evening,” he deadpanned. Most of the hijinks Dick and his crew got into back in the day wouldn’t fly in 2019, he said, because of the level of professionalism today. 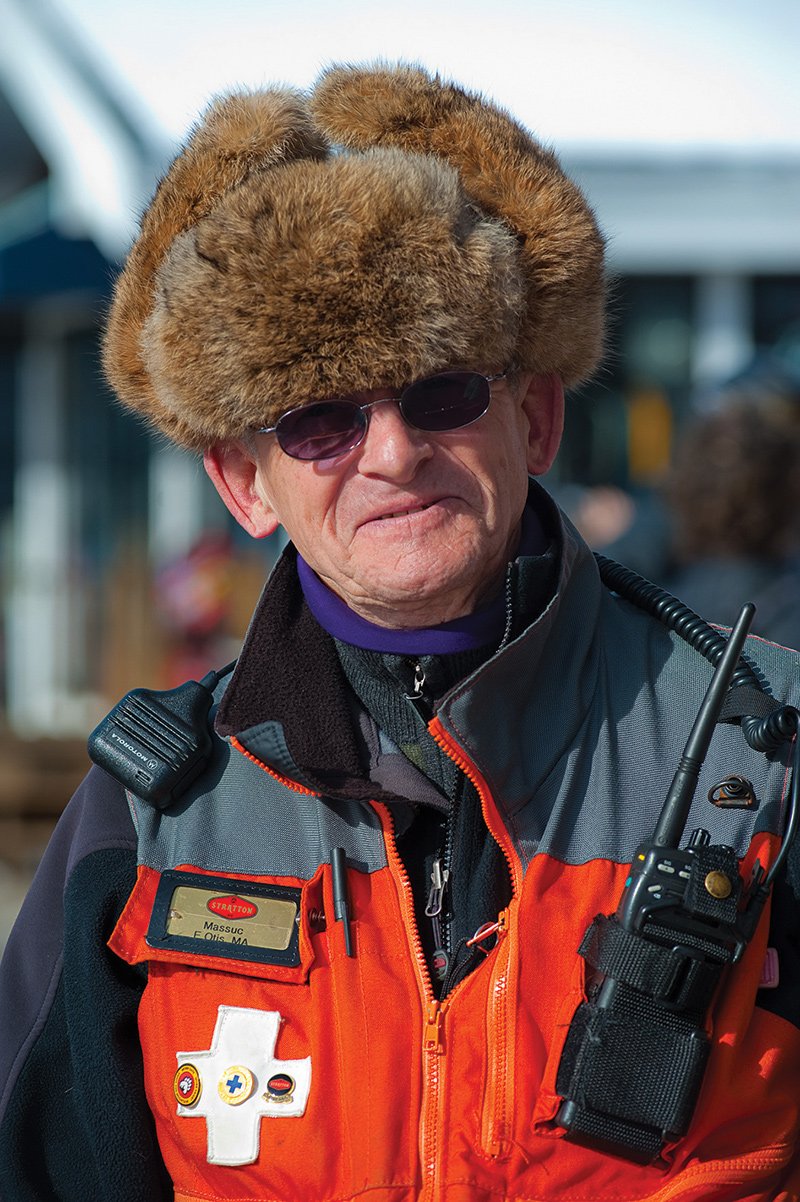 Becoming a patroller requires more than just great skiing or riding skills. Every member must successfully complete a course in Outdoor Emergency Care, a program developed by the National Ski Patrol for certification in first aid and other pre-hospital care and treatment in outdoor settings. Vicky Collingwood, who is in charge of Stratton’s OEC program, said it typically takes a ski patrol candidate nearly a year to complete the resort’s training program. “They begin an online learning program in July and that typically takes six months,” she explained.

When the mountain opens, hands-on training begins. “We work on all the skills, splinting, doing patient assessments, how to run a toboggan, and so on. Then Stratton adds a few other hurdles,” she said. “They have to go out and shadow an instructor on the hill. After that, they go out and an instructor will shadow them. And finally, we do what we call a chaos event.” That is a simulated emergency situation in which aspiring ski patrollers have to employ all the skills they’ve learned in a stressful, fast-paced scenario. After a final review by the patrol supervisors, successful candidates get a first aid symbol on their back and can go out and work the hill.

Many members of Stratton’s ski patrol are also certified emergency medical technicians who have completed another 160 hours of training and some are even paramedics. And the learning doesn’t stop there. Every day the ski patrol does some sort of training session either in their headquarters or on the hill to sharpen the team’s skills. The pride they take in doing the job well, the bond that develops with fellow patrollers, not to mention the amazing skiing and riding, are what keeps longtime patrollers coming back to Stratton.

“Our former patrol director Denny Davison still patrols with us and keeps us in stitches most days,” Collingwood said. “Once we were in the summit building, sitting around toward the end of the day. It was pretty quiet and low key. All of a sudden Denny jumped up like someone had lit a fire under his rear end. He’s jumping around, shaking his leg, doing this crazy dance and using all kinds of colorful language. Turns out a vole, one of the ones that typically inhabit our ski patrol building, had crawled up his pants, through the waistband, and into his shirt. He was flapping around so furiously and we were laughing so hard we couldn’t get up to help him. He finally shook his arm violently enough so the vole went shooting out his sleeve and across the floor. It was pretty priceless.”

“We have it all on video,” she continued, “and we show it at the beginning of every season for all the new candidates. Denny just walks around shaking his head saying, ‘Do we really have to bring this up again?’” 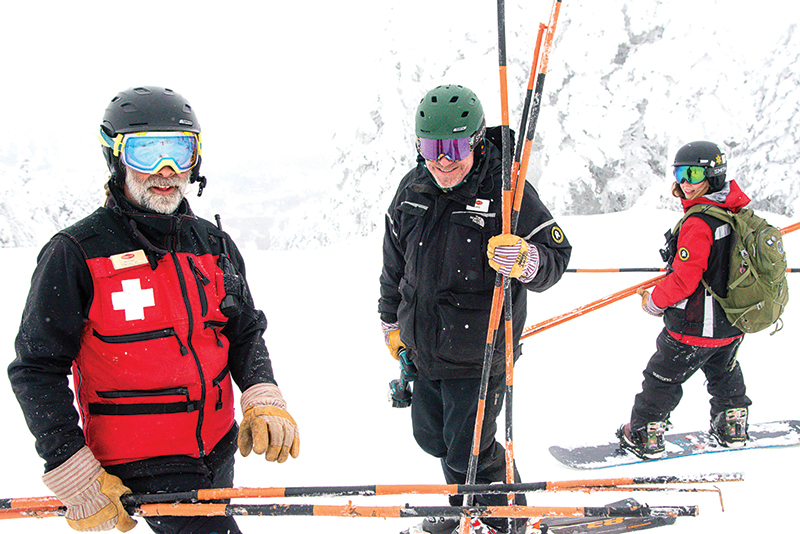 That kind of ribbing, as well as the lifelong friendships and esprit de corps are “probably the most appealing parts of the job,” according to Schilling. “I’ve been here for 20 years; this is my second home, my second family,” he continued. “I would do anything for any patroller on my staff and they would do the same for me. I wouldn’t want to work with any other group of people.”