They ski. They snowshoe. They hike. They play bridge and golf and tennis. They gather in restaurants for dinner and dancing. They join each other for après ski klatches. The members of the Stratton Trailblazers Ski Club breathe new life into the term “active adults.” They are a group of mostly retired folks who were brought together through the love of skiing, but their camaraderie and joie de vivre doesn’t stop there.

The idea for the club started in 1995 when Jerry Rosen and about 30 skiing regulars at Stratton Mountain got the idea to form a group of age 50+ skiers. Word of an invitation to “ski with some new friends” spread and by 2005 membership soared to over 900. With more people came ideas for additional social events that these new friends could enjoy together. “You develop a circle of friends that you can do other non-club activities with,” says current club President Jim Reynolds. “You meet people from the club, develop close friendships and then you have an instant group to draw from for other things you might want to do, such as a round of golf, a dinner out or going to the races at Saratoga. It’s good for singles, for people living alone.” 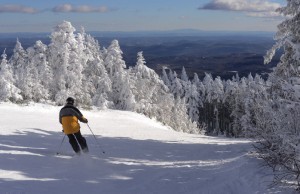 Membership now numbers around 700. About one-third are full-time residents and two-thirds are weekend people, mostly retired professionals with second homes. “Therefore we try to focus as many events that we can on the weekends,” Reynolds says. New members are recruited through a fall mailing to local towns as well as invitations from current members.

Annual dues go toward subsidizing some of the events because the 50+ audience is price-sensitive, says Reynolds. “We want to keep events at reasonable rates.” However, not all of the money goes toward social events. The club also conducts a Charitable Grants Program, with up to 20% of the dues allotted to contributions to various entities, including the Jimmie Huega MS Foundation, Grace Cottage Hospital, Race for the Cure, the Stratton Foundation’s Challenge and Men Who Cook. Their main thrust has been the Otis Clinic at Stratton, the Junior Instructional Ski Program and other local organizations, schools and rescue squads.

“Many folks have said that their experience on the mountain and living in the area full- or part-time is much better since they joined Trailblazers.” —Jim Reynolds

Trailblazer members’ altruism crosses over into other groups, such as the Stratton Country Club and Stratton Foundation. Also, many volunteer as mountain guides, on the safety patrol, as teachers at the ski school on weekends, at the ticket windows or in a variety of other mountain jobs.

“We started as a ski club and we haven’t lost that focus,” Reynolds says, noting that Stratton offers coached clinics with instruction for Trailblazers members. They also set a weekly racing course for Trailblazers members—fun, casual races for those who are competitive and like to push themselves a bit, yet no one is asked to ski beyond their ability.

Reynolds says that the 50+ demographic is growing and is much more active than they used to be. “Trailblazers” provides both physical and social activities that these people can enjoy with others who have similar interests,” he says. The organization is large enough to be able to provide a wide variety of activities for people to choose from. And they are always willing to experiment with something new and different. For instance, someone suggested a bocce league at Stratton, which they are looking into. They are also considering activities with other similar ski groups, and often plan out-of-town ski trips.

To Reynolds, it’s all about helping people out. “We are a tight-knit group always ready to pitch in and help others. Many folks have said that their experience on the mountain and living in the area full- or part-time is much better since they joined Trailblazers.” For more information on the Trailblazers visit their website at strattontrailblazers.com

Kristin McDonald is a writer in Bennington. She admits that keeping up with the Trailblazers would be a challenge indeed.