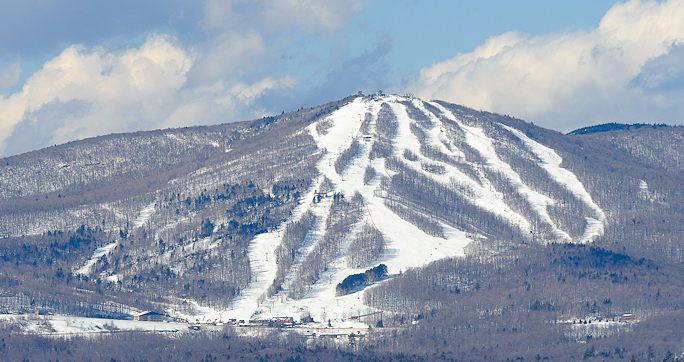 Bromley Mountain is where I first learned to ski in the 1970s. Shortly before my fourth birthday in December 1974, I wrote a letter to Santa Claus that was published in the local newspaper. In the letter, I asked Santa for a tea set, a cuckoo clock, and a pair of skis.

The tea set and the cuckoo clock never came. But on Christmas morning forty years ago, a pair of yellow skis with red plastic bindings were waiting for me under the tree.

Growing up in Manchester, I skied nearly every weekend at Bromley or Stratton with my parents, my brothers and sisters, and my friends. Winter was by far my favorite season.

When I was barely older than a preschooler, I would ride Bromley’s J-bar and ski alone through the narrow wooded trails between School Slope and Plaza. It was a blast. (In the 70s, parents didn’t think twice about letting a young child ski alone in the woods without a helmet!)

A Program to Learn to Ski or Ride

Now my own daughter is 3, and she’ll ski for the first time this winter at Cochran’s Ski Areain Richmond in the Ski Tots program. The program is led by Olympic gold medalist Barbara Ann Cochran, who helps instruct parents on how to teach their preschoolers to ski. I’ve taken a skiing hiatus since Phoebe was born, so it will be fun to be out on the slopes again. Even better, I will be skiing with Phoebe and writing about our adventures on Ski Vermont’s All Mountain Mamas blog next month.

For those of you who are itching to learn how to ski or snowboard, January is Learn to Ski and Snowboard Month in Vermont. Ski Vermont is offering a $29 package for beginners, including a beginner area lift ticket, lesson and rental during the month of January. The program is offered at several Vermont resorts, including Bromley, Bolton, Jay Peak, Mount Snow and Stratton.

Whatever your ability, there’s already plenty of skiing and riding to enjoy in Vermont. More than a dozen alpine and Nordic ski areas are open for the season, and additional ski areas are planning to open by mid-December.

I’m excited to get back out there. Are you?