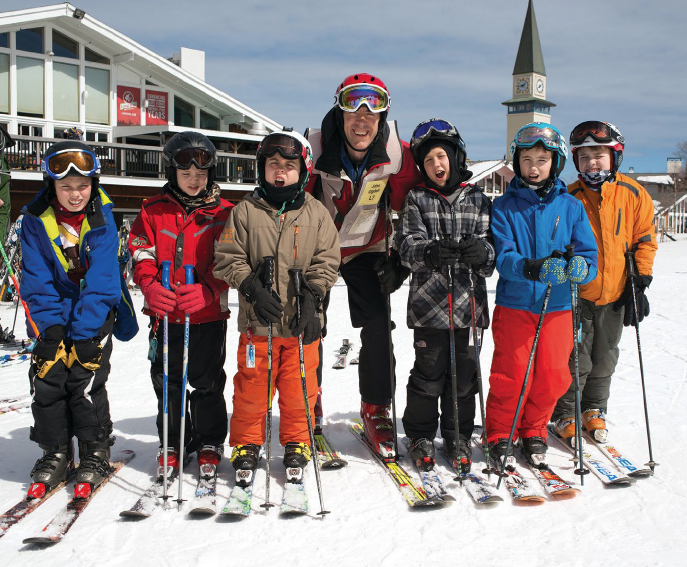 The Craigslist ad read: “Burton Chicklet snowboard only used a handful of times. Pink. Comes with child’s Flow bindings.” Score. I’d been searching for a used snowboard for my daughter for months, and this one popped up on my Craigslist app just a week shy of Christmas. I met the seller at a 7-11 in West Brattleboro the next day, cash in hand. You know how your heart melts a little bit when you see a pair of miniature sneakers for babies? Well my heart almost exploded when I saw the 90cm snowboard, covered in pink and purple graphics.

Even though my daughter had only been walking for about eight months, I simply couldn’t wait to see her unwrap her first snowboard. Christmas Eve, after my wife and I read The Polar Express and our baby girl was asleep, I spent an hour adjusting the bindings and tuning the board. I’d never been so excited to give a gift. I wasn’t just giving a piece of equipment, I was providing my seed a lifetime of passion and love for the best sport ever invented.

Fast forward two weeks. We’re on the bunny slope. “Noooo,” was my daughter’s answer as I asked, “Are you sure you don’t want to just try one more time?” She’d been outside on the snowboard for a total of 90 seconds, enough time to strap her into the bindings, stand her up and pull her 10 feet with a leash attached to the board. “No THANK you,” she protested. (My wife and I had recently been stressing the importance of politeness when saying “no”. So at least that was working.) A little bit heartbroken, I unstrapped her from the board. I tried another tack.

“Look. See how Daddy rides his snowboard down the hill?” I demonstrated, gingerly sliding by her. She didn’t look. She was much more interested in the maple-flavored lollipop in Mommy’s purse.

My daughter is now almost four years old. The pink and purple snowboard is going strong, although she is still not quite big enough to completely fill it out. Since the strikeout on that first day, the sport has intrigued her more, enough that she can slide down the slope in our backyard, unassisted, for 20 to 30 feet.

“Your students get to snowboard on a school day?” Yup. “And it’s practically free.” Yup. What a beautiful concept, I remember thinking. 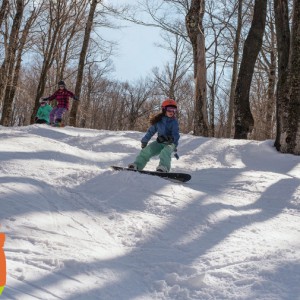 She now asks me if we can go snowboarding, which I consider a huge parenting win. My wife and I recently added a second child to the Stafford Family Winter Sports Team, so my duty to raise children who fully appreciate winters in the Green Mountains is now doubly important. Luckily, I’ve got help. Luckily, my daughters have the privilege of participating in the Junior Instructional Sports Program.

I first found out about JISP through my wife, who teaches art at an elementary school in Newfane. Years before we had children, she came home one day and explained that she’d be serving as a chaperone/instructor for her students on Wednesdays throughout the winter. “Wait a minute,” I interrupted. “Your students get to snowboard at Stratton on a school day?” Yup. “And it’s practically free.” Yup. What a beautiful concept, I remember thinking.

JISP was started in 1951 by Sally Pabst (Yes, she is from that Pabst family, the one that brews your Pabst Blue Ribbon.) as part of the Bromley Ski Club at Bromley Mountain. Sally’s mission when she formed JISP all those years ago was simple: provide southern Vermont school children with an opportunity to learn to ski, and foster their kinship with Vermont and winter sports. It needed to be inexpensive, and it needed to be accessible to as many children as possible. Great idea, right? The locals thought so; by the mid-1960s over 450 school kids from seven nearby schools were perfecting their turns on Bromley’s slopes.

Sally Pabst’s mission when she formed JISP all those years ago was simple: provide school children with an opportunity to learn to ski, and foster their kinship with Vermont and winter sports. 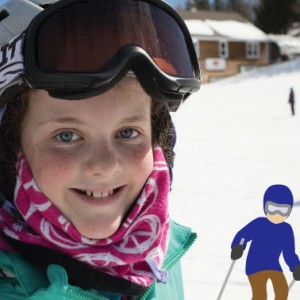 By 1972, JISP’s popularity had grown substantially. The program spilled over to nearby Stratton Mountain, where a partnership allowed JISPers to ski there as well. Enrollment continued to grow and in 1988, with the help of a local fledgling company called Burton Snowboards, snowboarding was introduced to JISP. This was just two years after Stratton became the first resort in the country to officially “allow” snowboarders.<!nextpage–>

Fast forward to 2014 and the ski industry has modernized in myriad ways. (High-speed, six-pack chairlift ride, anyone?). But Pabst’s original mission to get local kids out on the snow is going stronger than ever. “Our mission has withstood the test of time and hasn’t changed much since 1951,” says Dave Pinder, executive director of the Bromley Outing Club (formerly the Bromley Ski Club), the organization that oversees JISP. “We want to provide kids with their first ski or snowboard experience and instill a love of winter sports.”

Elementary school kids who sign up for JISP get to ski or snowboard for nine afternoons in January, February and March. They have a normal morning at school, then load onto a school bus or pile into parents’ minivans around noon. From 1 to 3 p.m. they have supervised instruction, and then are allowed “free ski” time until the lifts close at 4p.m. Pinder is also proud to report that JISP partners with the Bart J. Ruggiere Adaptive Sports Center at Bromley to provide instruction and one-on-one support to kids with disabilities. It’s also possible for a child to choose to skate or cross-country ski on JISP days if they would rather.

“ Along with the ability, and confidence, to carve my way down the steeps, I gained a whole new appreciation for winter, the outdoors and my home state of Vermont.”

“We made the 30-minute trek to Stratton every Wednesday afternoon with parent chaperones,” remembers Peter Biolsi, an email-marketing specialist at King Arthur Flour who attended Brookline Elementary School in the 1990s and learned to ski and snowboard through JISP. “Along with the ability, and confidence, to carve my way down the steeps, I gained a whole new appreciation for winter, the outdoors and my home state of Vermont.” Biolsi would eventually go on to volunteer as a JISP instructor after college. His first child is due around Thanksgiving, and he plans on JISP “being a central part of our family outings.”

Just as it did in the 1950s, JISP relies heavily—almost exclusively—on volunteers to keep it running. Parents, school teachers, ski instructors, coaches and community-minded skiers and snowboarders all team up to keep JISP as inexpensive as possible for kids.

For its part, Stratton Mountain has grown to embrace JISP almost as enthusiastically as Sally Pabst herself. ides drastically reduced equipment rental fees (We’re talking, like, $7 for a full day.) and access to Stratton’s professional instructors, participating students in grades K-6 receive a full season’s pass, with absolutely no blackout dates or restrictions. While Bromley has schools in the southwest corner of Vermont covered, Stratton serves schools in southeastern towns like Newfane, Townshend, Grafton and Windham. “Supporting JISP strengthens the community relationship,” says Ian Bruso, seasonal programs manager at Stratton. “It creates accessibility to the mountains for local students, some of whom may not have the opportunity to do so otherwise.”

Just as it did in the 1950s, JISP relies heavily—almost exclusively—on volunteers to keep it running. Parents, school teachers, ski instructors, coaches and community-minded skiers and snowboarders all team up to keep JISP as inexpensive as possible for kids. Bromley’s 2013-14 JISP fee was $95, while Stratton’s was just $35. That’s $35 for the entire season. Not bad, considering a regular one-day, midweek lift ticket at Stratton runs $61 for kids. Parents and grandparents coordinate carpools to the mountain. And elementary school teachers, after a morning spent in the classroom drilling multiplication tables, may find themselves on a snowboard, teaching toeside turns to those same students. 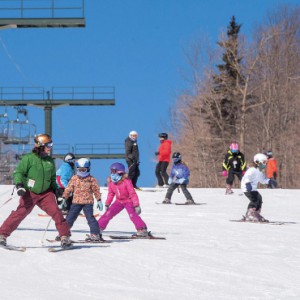 Over a dozen elementary schools and about 600 kids participate in Bromley’s JISP program, so it takes a large group of volunteers to make it all happen. Pinder reports that it takes about 150 volunteers to run the program effectively. Both Bromley Mountain and Stratton Mountain provide professional ski and snowboard instructors to train the volunteer chaperones and instructors early in the season and keep them on course throughout the winter. For every day they volunteer, volunteer chaperones and instructors receive a coupon valid for a lift ticket that they can use another day.<!nextpage–>

“Without a doubt I think that the program is important to Vermont,” says Travis Shine, a snowboarder who grew up in Newfane and learned to ski through JISP. “It introduces the next generation to the sport.” Shine’s mother, an elementary school teacher in Grafton, and grandfather both volunteered as JISP instructors in the 1980s. Shine would tag along as a mini-JISPer before he even hit kindergarten, then continued in the program through high school. Now with two toddlers of his own, one of whom is already learning to snowboard, Shine is hoping “that they find as much joy in the program and the sport as I did as a child, and still do as an adult.”

JISP’s most famous alumnus is Ross Powers, a snowboarder who grew up about 10 miles from Bromley in South Londonderry. Powers honed his skills as an elementary school JISPer, eventually ending up sponsored by Burton Snowboards. His progression led him all the way to the 2002 Olympics, where he won the gold medal in the men’s halfpipe competition. These days, Powers runs a non-profit foundation that provides financial assistance to kids in need who want to snowboard. Powers’ mother still works in the base lodge at Bromley Mountain.

A fair amount of media attention has been paid to the recent exodus of young Vermonters—sometimes called the “brain drain”—as educated people in their 20s and 30s flee to other states for job opportunities. Biolsi and Pinder both think that JISP serves an important role in keeping Vermonters in their home state, or luring them back home from other states after college. “If you live around here and don’t enjoy winter, you’re gonna be pretty darn miserable,” says Pinder. “So it’s important that we keep [JISP] going and help kids develop a passion for Vermont.” “[JISP] creates a connection to the sport that will remain with them long into adulthood,” adds Biolsi.

“It can also get kids started on an early path to a career in resort management, operations, etc. Programs like JISP are a wise investment, with potential long-term benefits for the state’s tourism and resorts.”

“We just want to provide a solid foundation for kids to enjoy winter and appreciate their home state of Vermont,” says Pinder. ◊

Luke Stafford is a free lance writer from Newfane.