Perhaps you’ve seen or heard of the new monster truck/mountain bike hybrid that has been quietly appearing on snow-packed trails. Fat bikes—named for their gargantuan wheels and tires—are quickly turning cycling into a year-round sport. With bulky tires for better float and traction than a regular bike, fat bikes chomp through snow, ice, and even slush in winter. This is a bike that doesn’t hibernate.

Winter riding has caught on quickly among Vermonters: “Fat biking is no longer an experiment. It’s the real deal now,” proclaims Tom Maneggia of Bondville’s Norse House, now four years into fat bike fandom. At Viking Nordic Center in Londonderry, which has welcomed fat bikes since the spring of 2014, the number of riders is growing. “We’ll see a handful on a week- end, but it’s building,” reports manager Dana McNair. “I think it’s fun—it’s another evolution of the sport that keeps it fresh.” 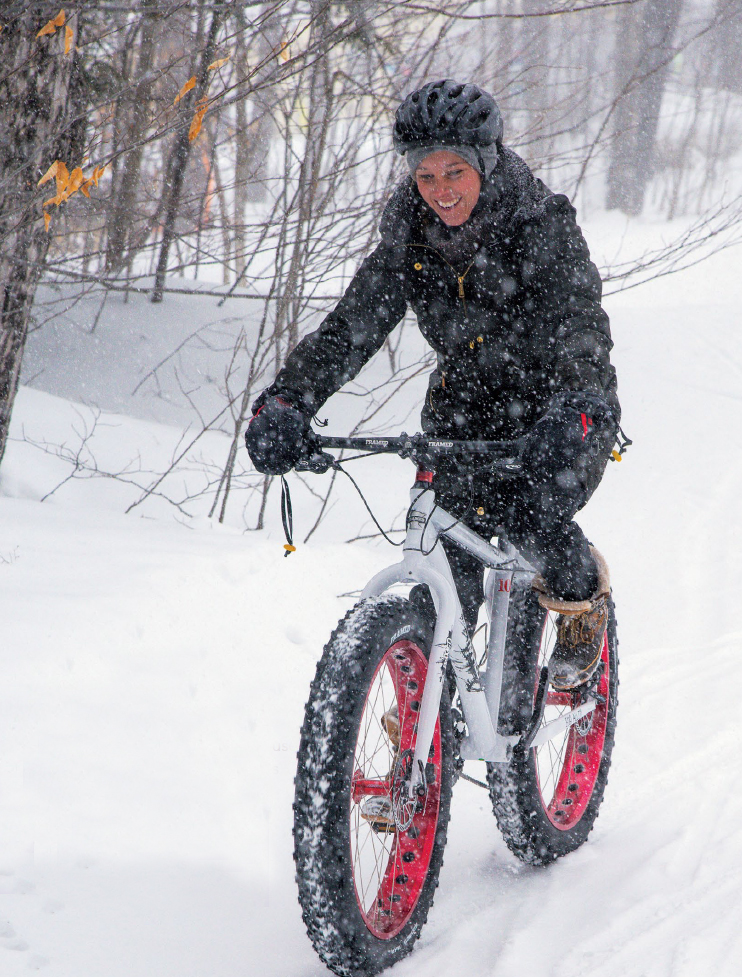 People use fat bikes throughout the winter for exercise, exploration, and even commuting. “We have one mechanic that rides his fat bike to work every day—he takes a snowmobile trail,” says Jon Woddell, manager at Mountain Riders in Rawsonville. “A fat bike makes riding your bike a year-round sport. People’s fitness levels are getting higher and higher. ”

Fat bikes can conquer terrain in every season because of the big tires—other than that, they aren’t too different from your standard mountain bike. “It’s all about the tire size,” Jon ex- plains. Mountain Riders rents and sells the Rocky Mountain Blizzard 30, which has beastly tires 4.7 inches wide. “That’s double the size of a regular mountain bike tire. You run it at really low air pressure so it gains a lot more traction and a lot more float.” Fewer PSIs allows the tires to spread out, grip the ground, and absorb bumps comfortably (many fat bike models are rigid and don’t have the suspension common in other mountain bikes).

“The bikes go places that normal mountain bikes don’t go, even in the summer months, because of the traction. They’ll even climb up and float above mud.”

The result is a silky smooth ride on a bike that feels like it’s floating. It tackles it all.

Another bonus for fat bikers is that winter cycling is at its most fun exactly when skis or snowboards are less exhilarating: on firm, hard snow. Packed snow, like groomed snowshoe or snowmobile trails, is optimal. “Once you have that winter lull or even rain— which we tend to have in New England—you can almost go anywhere on a fat bike because the snow firms up,” says one devotee. “Fat biking bridges the gap.”

Fat biking also affords the chance to explore and the freedom to travel groomed trails or to scoot through woods, much like cross-country skis and snowshoes. And perhaps most importantly, a fat bike adds another option for getting out and staying ac- tive in the wintertime. “We just had a customer who doesn’t do anything in the winter; her husband skis and she’s tired of snowshoeing,” recount the guys at Norse House. “She rode a fat bike, loved it, and now she’s got something to do in the winter.”

If you like to bike roads or trails in the summer, you’ll probably like riding snow on a fat bike. The winter terrain makes it a little more strenuous; expect to sweat as you push through snow, especially fresh snow. Even in hard-packed snow or dirt, a fat bike climbs more slowly than a slimmer bike because of the soft tires. But, after you’ve earned it, you won’t miss out on the fun part. As one biker puts it, “you have that same feeling as snowboarding: the wind in your face and the adrenaline of going down mountains fast.”

Putting the Fat in Fat Bike

Fat bikes were first adapted for cross-country-style biking on the Iditarod Trail, appearing in the human-powered races (once called the Iditabike) that started up in the 1980s. To make it over the 200-mile snow-covered course (and later, 350- and 1,000-mile races) on a bike, racers tried a number of new things, including welding two bicycle rims side-by-side, each with a tire, to fashion a doublewide tire.

Fat bikes have become streamlined and svelte since then, moving out of the DIYer’s workshop and into the lineups of mainstream bike manufacturers. Minnesota-based bicycle company Surly released the first mass-produced fat bike in 2005, and it is now joined by dozens of models from many manufacturers. Frames, rims, and tires come in a wide variety of sizes and styles, letting riders adapt their fat bike to their riding style and routines. Aside from its burly tires, a new fat bike looks a lot like any other mountain bike (a far cry from the original Frankenbikes used during the Iditarod).

Aside from its burly tires, a new fat bike looks a lot like any other mountain bike (a far cry from the original Frankenbikes used during the Iditarod).

Mechanically, fat bikes are nearly identical to traditional mountain bikes, but with a few key changes. “The forks have to be wider to accom- modate tire size, but other than that, the basic mechanics of the bike are exactly the same,” explains Jon. “The gearing is very low on these bikes, so in deeper snow or sand it’s much easier to pedal.”

Front suspension—a staple in mountain bikes for a decade at least— is a recent addition for fat bikes since the tires lend a cushier ride on their own. “The manufacturers are just starting to put shocks on, and front fork suspension is getting a lot more popular.” Jon notes. Full suspension fat bikes are popping up, but are far more rare.

Some fat bikes can now accommodate several different tire sizes, letting the rider adapt the bike to all seasons and conditions. “You can change not only the width but also the height of the rim for summer,” says Tom. “The convertibility is fantastic. Instead of hanging another bike on the wall, you change the tires, just like switching your snow tires on your car.”

And the price? The most affordable fat bike starts around $1,000, but with plenty of available customizations, from adding suspension to light carbon frames, the price tag can easily climb above six grand. Most riders will pick and choose the features they want in their bike and eventually special order or custom build the right one. Too impatient for that? Norse House stocks a selection of Trek and Framed bikes—a kid’s fat bike—so you can walk in and ride out.

With a bike that can take you to new places, over all types of terrain in any kind of weather, what you wear and what you bring are important considerations. The mantra of winter dressing—layers upon layers—is well worth repeating here. To be comfortable chugging uphill and letting it fly on a windy downhill requires some changing of clothes, so most riders recommend bringing a backpack with some extra options. Warm gloves and warm boots (not bike shoes) are essential, as are goggles or glasses. As for helmets, wear one. A bike helmet or a ski or snowboard helmet will do.

Whether you want to take your wheeled steed where other bikes dare not go, or just can’t stand six long months without a ride, it’s time to give fat biking a try. Riding a bike in the snow is not all that different than riding a bike on anything else. The trick is in choosing the timing and choosing the terrain.

The number one rule of thumb for fat bikers is to check conditions and make sure that fat bikes are welcome along your intended ride. “There are certain times when the snow is too soft for fat bikes,” Dana cautions. “A biker should never assume that something is open. They should always call ahead and check.”

The magic word in a fat biking snow report is “firm,” so fat biking shouldn’t cut into your powder days. More than two or three inches of fresh snow is really challenging because you have to push the bike through that. Save the snowiest days for your skis or board—what makes for imperfect skiing makes for ideal fat biking (and vice versa). 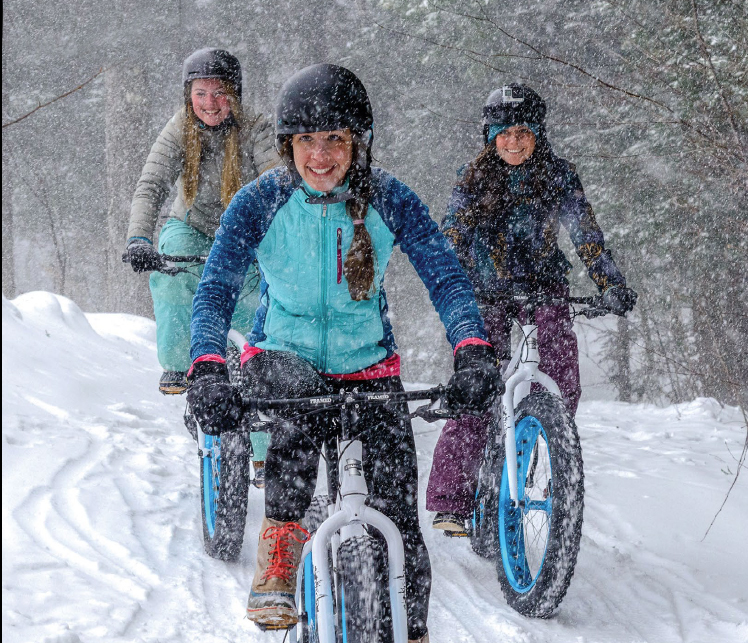 When conditions are right, Nordic ski centers are the perfect place to try out a fat bike. The groomed trails provide near-perfect conditions and good practice ground for testing traction and balance. The mix of uphills and downhills of different difficulties also poses a good challenge for progressing riders, but terrain should be chosen carefully. Going up a mountain is aerobically challenging, but to go down, you need to be a good biker. You don’t necessarily stop or turn right away in the snow.

Like anyone riding multi-use trails, fat bikers should follow common trail etiquette: yield to all others when riding (skiers don’t have brakes!), leave room for others to pass, ride on the firmest part of the track, and never ride in those carefully set classic ski tracks. “We’ve found that the bikers are really respectful of the skiers,” Dana affirms. “Our skiers enjoy seeing them cruising off into the distance.”

Exploring the backcountry on a fat bike is possible if the snow or ground is hard enough. Late fall/early winter is a great time to take long adventure rides, when the ground is frozen and the leaves are down.

Exploring the backcountry on a fat bike is possible, too, if the snow or ground is hard enough. There is more uncertainty about what the snow might do around a corner or below a drop. Late fall is a great time to take long adventure rides, when the ground is frozen and the leaves are down, whether or not there’s a dusting of snow.

In many ways, freedom is the major appeal of fat bikes. They have opened up an entirely new season for cyclists and more than one in Vermont. It’s a bike that is just as suited to muddy trails as sloppy roads and snowy woods, a place of common ground for all biking disciplines. If you’re a devoted biker, the fat bike is far from being a niche piece of equipment. Unlike your golf clubs or skis, this is one piece of equipment that needn’t spend any part of the year gathering cobwebs in your basement or garage. Even for the occasional cyclist, fat biking is easy to pick up and packs a lot of thrills.

If the key to surviving, thriving and enjoying winter is finding ways to have fun outside, then fat biking is a fantastic new weapon against the winter blahs. ◊

Meryl Robinson is a freelance writer who lives and bikes in Brattleboro.