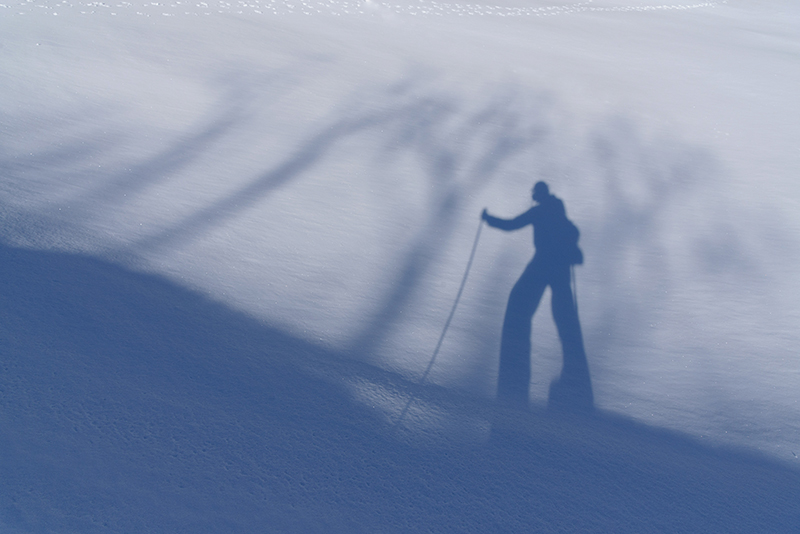 Earning your runs by climbing up before speeding down is a new way to appreciate your surroundings, as well as get a super workout.

While just about every skier and rider at Stratton Mountain is whizzing down the hill, a few hardy types are climbing back up. Uphill skiing and hiking are the latest trends in mountain sports, ambitious activities that began in Europe and are becoming more popular on both the East and West Coasts every year.

Advances in equipment are helping to drive the trend, enthusiasts say, as well as the chance to enjoy a whole other outdoor experience. “I’ve been hiking since I graduated college in 1989,” said Roxanne Prescott, 51, who snowshoes up Stratton Mountain two or three times a week all winter. “I wanted to augment my fitness, and hiking up the mountain is a great workout; it kicks your butt. Once I started doing it I realized how much I cherished the quiet time.” 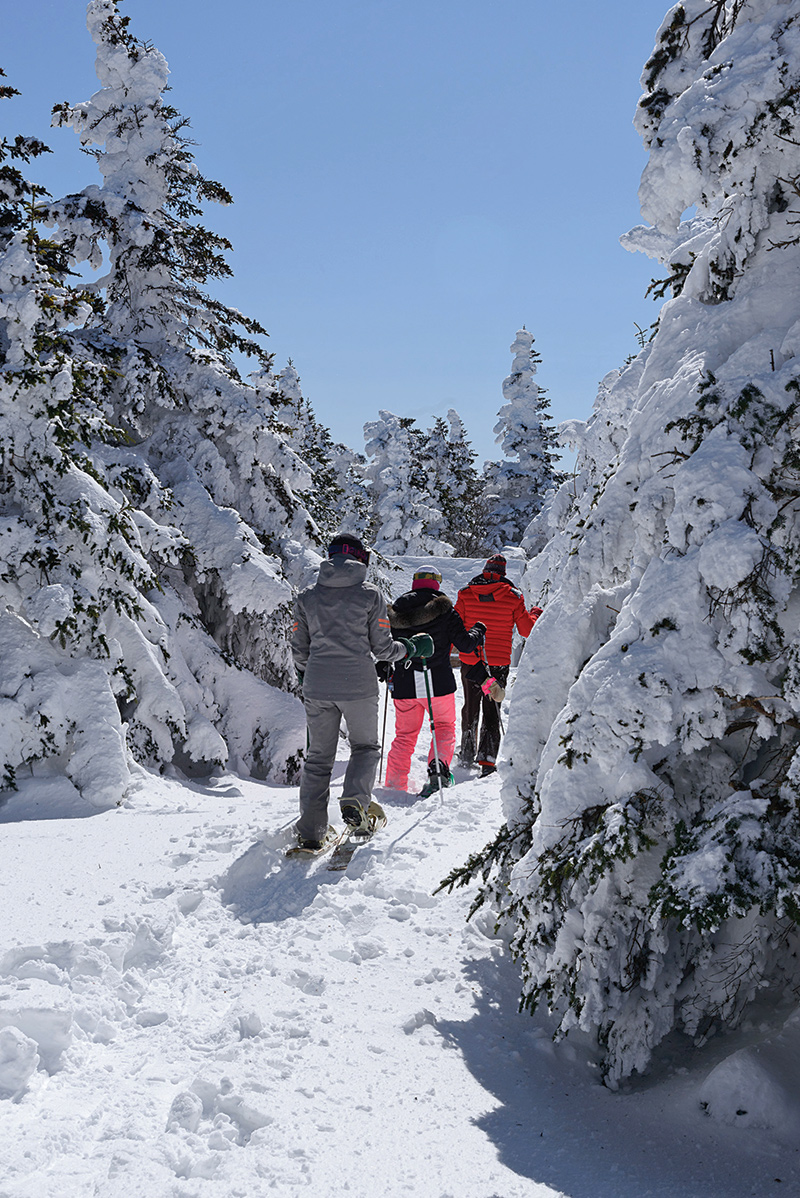 Climbers will tell you that scaling the mountain under your own power makes the ride down all that much sweeter. “Just the exhilaration of skiing or riding down the mountain after you’ve climbed up is unmatched for me,” Prescott said. “I’m smiling from ear to ear. It’s just magical.”

Mountain legend Hubert Schriebl has been hiking, climbing, and skiing up mountains since his boyhood in Austria, and at 82, he still does it two or three times a week all year ’round. “Our way of life was a little different in Austria in my teens and early 20s,” he said. “We had no money and mountain climbing was for free. I had a lot of friends who had the same kinds of interests and it was always a great time.”

Schriebl, who has scaled the 17,000-foot Mount Popocatépetl in Mexico and another 26,000-foot peak in the Himalayas, said he has used “every kind of weapon” to get up mountains, but these days uphill skis are his favorite way to travel. “In the winter you can glide on the top of the snow and make longer steps,” he said. “And me being a short person, every inch helps.”

Uphill skiing, also known as skinning, uses special “skins” on the bottom of skis that can both slide on and grip the snow. “Originally they used seal skin,” Kajah explained. “Now it is a synthetic material, sort of like a lint brush, where all the hairs are going in one direction so you can glide easily uphill but they won’t let you slide backward.” A special type of binding, similar to those on cross-country skis, allows skinners to lift their heels up in the back when they’re going uphill and then to lock them in place when they’re skiing down.

Riders either use snowshoes and carry their snowboards on their backs or they can use a split board. These devices can be separated into two ski-like parts with climbing skins on the bottoms to ascend slopes. The separate parts are then joined together to form a regular snowboard for the trip back down. And when the slopes are a bit icy, the best option for everyone might be mountaineering crampons or ice cleats strapped to boots. 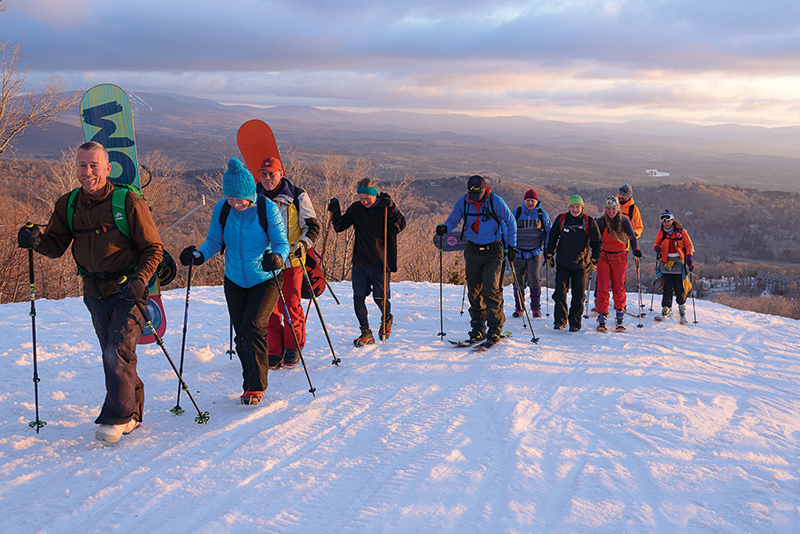 Schriebl, the acclaimed photographer for both Stratton Magazine and Stratton Mountain Resort, may be singularly responsible for bringing the uphill trend to the resort, introducing the sport to dozens of locals and visitors who often join him on his morning trek. “I have inspired a few people; it’s a great thing when it happens,” he said. Schriebl said he is usually joined by a small group of hikers on his regular morning trips up the mountain and has had as many as 20 alongside him for his New Year’s Day climbs.

“Hubert sets the standards for all of us; everybody wants to be like Hubert,” said Prescott, who climbs with Schriebl all winter. “He’s an iconic Stratton figure and has had extraordinary experiences on huge mountains in Austria and other places. I love hearing his stories during our hikes.”

Schriebl boasts that he has never been to the gym in all his 82 years, and has only been on a treadmill for a stress test. “My numbers were perfect,” he said. “I posted the results on Facebook to show what hiking can do.” 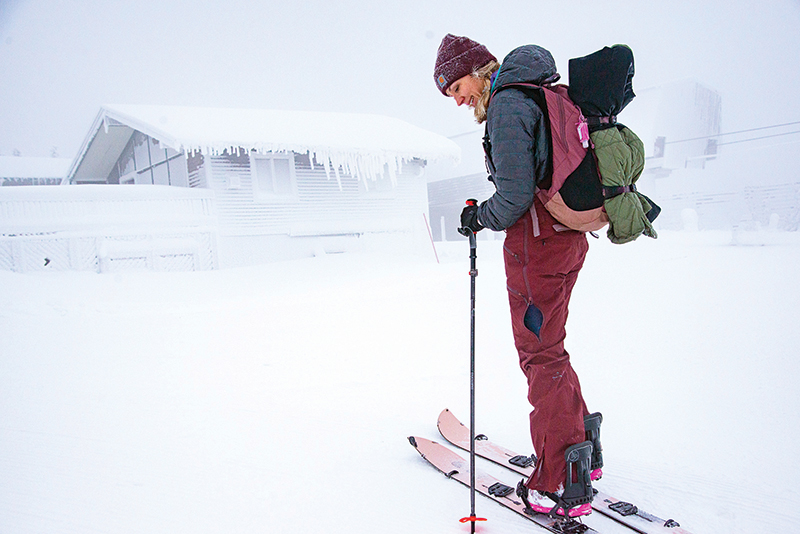 It takes Schriebl and Prescott 45 minutes to an hour to hike the 1,800 feet up Stratton Mountain. “You’re sweating like a hog but it feels so good,” Prescott said. Bringing a change of clothes up the mountain is imperative, climbers say, because you will be soaked when you reach the peak, which would make for a freezing ride down. Fortunately, Stratton built a cozy hut at the summit with snacks and a wood stove where climbers can rest and change in relative comfort. It is called, of course, Hubert Haus.

“We’re fortunate to have it,” Schriebl said. “You have to change very quickly before you catch cold, and it’s usually heated or at least out of the wind and that’s a good thing.”

Diehard uphillers will go out in just about any weather, because, they say, that’s part of the challenge. 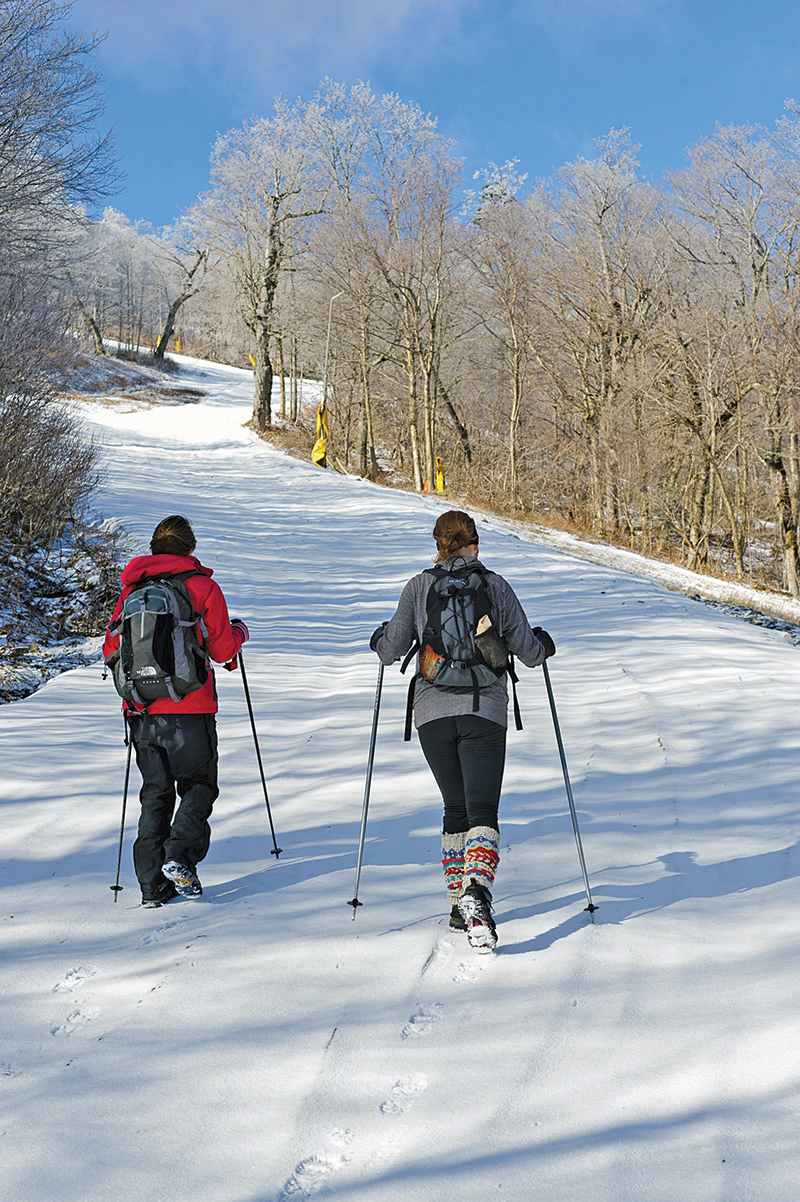 “I’ve gone when its super windy and cold, when it’s snowing like crazy and when it’s unexpectedly warm,” Prescott said. “Just going in any conditions under any circumstances makes you feel good. Stratton is not the Himalayas, but mastering this mountain makes you feel like you’ve really accomplished something.”

But perhaps the most rewarding part of uphilling is the chance to slow down and savor the ever-changing natural panorama of the mountain.

“It’s almost a spiritual experience,” Prescott said. “You hear everything that’s going on, the crunch of the snow, the wind. For me, it’s a chance to really experience the whole mountain, to be able to utilize the amazing opportunity we have right there in front of us.”

And Schriebl, who has been at it for decades, says every time he climbs it’s a different adventure.

“I never get bored; it’s always different, the clouds, the view—it’s never the same,” he said. “You see fantastic sunrises and sunsets. In the winter it’s very dramatic, you have the cold. Outside it’s freezing, inside you’re soaking wet from sweating. I don’t put anything in my ears. I like the sounds. I like the feel of the atmosphere.” And the experience can become addicting. 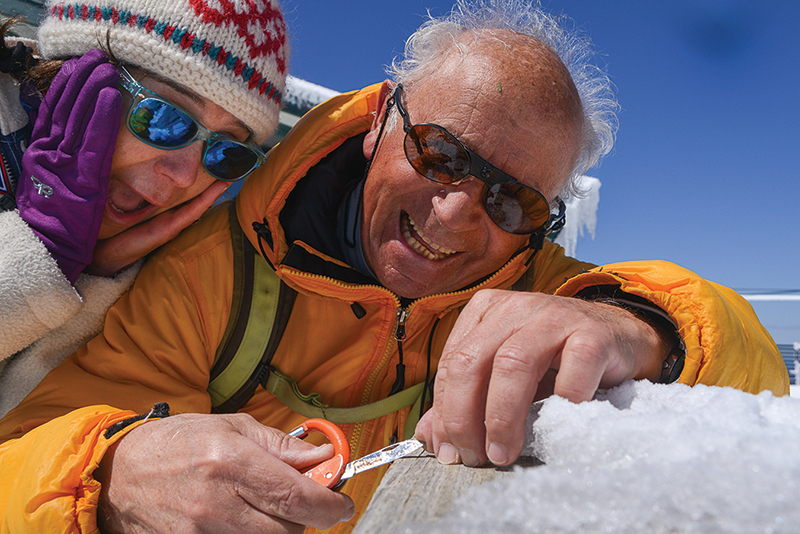 While downhill skiing is a thrilling adrenaline rush, intrepid uphill hikers say the quiet pleasures of ascending the slopes, while everyone else is throwing themselves down, is an incomparable delight for the body and the soul, and the ultimate way to earn your turns. 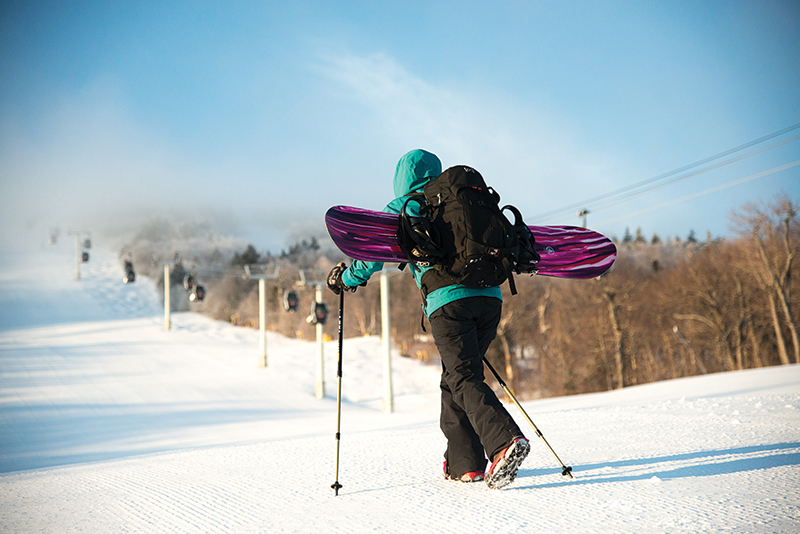 So, you want to try going uphill instead of down? Here are some tips from experts on how to start skinning or hiking at Stratton: