Sandy Sumner is the soft-spoken champion of Nordic skating in Southern Vermont.

An amateur video shot in Sweden changed Sandy Sumner’s life in Southern Vermont. It was the winter of 2006, and Sumner was getting tired of cross-country skiing—or, to be more accurate, cross-country skiing was making him tired. “I really love winter, and I love gliding through the woods on skis,” he says. “But the uphills were killing me!”

Nordic skating basically involves skating wherever you want to skate, on frozen lakes, rivers, the ocean coastline or inland canals. 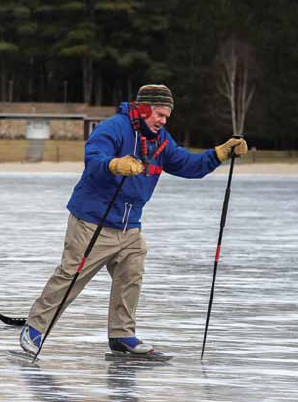 So he sat down at his computer and typed “ice-skating outdoors” into his Google search engine. Within minutes, he was mesmerized by a short video showing three men skating across Lake Vanern, the largest lake in Sweden. With the smooth side-to-side motion of cross-country skiers, they glide across an endless expanse of satin-smooth ice. They pass by small islands along a treecovered shoreline. They circle the lofty turbines of an offshore wind farm. They slide toward a distant horizon that blends into a limitless sky. (To watch the video, go to YouTube and search for “Vanern 2010”).

This video is fantastic,” says Sumner, as he shows it to me eight years later. He watches his computer screen with the quiet intensity of a disciple. “The lake is so vast, and the ice is so beautiful! And then I found more skating videos, mostly from Sweden and Norway. I was completely captivated. I knew I had to try it.”

Growing up in Pittsburgh, Sumner had skated at a nearby park as kid. “My dad would take us to the outdoor rink,” he says. “We’d zoom around and bang ourselves up pretty good, and that was where it stopped. After that, I didn’t skate for years.” But these Scandinavian videos were very different from the sport he remembered.

Sumner had stumbled across the sport of Nordic skating, a recreational form of ice-skating that originated in Sweden and is gaining popularity across North America. While aficionados may quibble over definitions—as a rather stern Wikipedia article explains, Nordic skating may also be called “trip skating” or “wild skating,” but must not be confused with the Dutch version called “tour skating”— the sport basically involves skating wherever you want to skate, on frozen lakes, rivers, the ocean coastline or inland canals. It’s also differentiated by equipment: Nordic skaters wear regular cross-country ski boots that clip into bindings mounted on long, curved aluminum skating blades. The blades are designed for speed, gliding distance and stability on ungroomed natural or “wild” ice.

Inspired by the video, Sumner did more research and was happily surprised to learn that one of North America’s leading proponents of Nordic skating, Jamie Hess, lives in Norwich, Vermont. After discovering the sport in Sweden, Hess opened his business, Nordic Skater, fifteen years ago. It’s a retail store that sells all kinds of sports equipment, from cross-country skis to inline skates; it’s also a leading importer of Nordic skating equipment in North America.

So Sumner hopped into his car and drove to Norwich one day. By late morning, he had purchased two pairs of skates—Nordic and figure skates, to give both sports a whirl. By early afternoon, he was jolting across a bumpy, 20-foot patch of ice on nearby Lake Morey. “The ice surface was horrendous,” he says. “So I skated back and forth a few times, and I said to myself, ‘Well, I guess this is what it is.’” On the way home, he stopped at Riley Rink in Manchester Center and laced up his figure skates. “It was so crowded, and I kept falling, and nobody had any compassion for me! The kids would just zoom by and cut me off. It was terrifying and embarrassing and it wasn’t what I wanted at all.”

Sumner stowed his new skates at his North Bennington home and waited. “A few weeks later, we had a thaw, and then it got cold again,” he says. “I went over to Lake Paran with my Nordic skates. And for the first time, I had the conditions that I’d seen in the video from Sweden. It was pure black ice. It was like stepping onto a moving walkway in an airport: The sense of speed, the sense of flying…It was everything I wanted it to be. And I’ve been hooked ever since.” 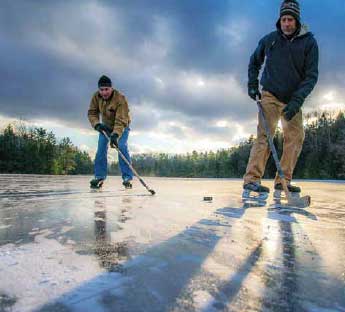 Sumner is not alone. Though he doesn’t track national statistics, Jamie Hess says that when he first opened his business in 2000, he was selling or shipping 50 pairs of Nordic skates per year to customers across North America. He now sells 1,000 pairs per  season, and estimates that at least 1,000 people in Vermont participate in the sport. His sales are sparked by the weather—he profits from early, cold winters with very little snow—and by people like Sandy, who discover the sport and get their friends hooked. “This year, the sport has exploded in Alaska,” Jamie Hess of Nordic Skater says. “Winter arrived early there, in October, with lots of ice but no snow. There’s nothing to do outdoors but go ice-skating, so people have taken up the sport in huge numbers. One guy bought skates and did a 100-mile wilderness tour up a frozen river.”

The Locations: Where to Skate

The best place to try Nordic skating in Southern Vermont is Lake Paran in North Bennington, where Sandy Sumner uses a snowblower to clear a path whenever possible. To add your name to his informal list, send him an e-mail ([email protected] net). You can also learn more about winter activities at the lake on the Paran Recreations Facebook page; find it by searching for “Lake Paran— North Bennington, Vermont.”

If you’re willing to drive, the epicenter of Nordic skating in Vermont is Lake Morey in Fairlee, where the Lake Morey Resort, Upper Valley Trails Alliance and the Hulbert Outdoor Center maintain the longest ice-skating trail in the United States. It’s a 4.5-mile loop around the lake, and you can rent Nordic-skating gear at the resort. Call (800) 423-1211 or go to www.lakemoreyresort.com.

On a much smaller scale, Sumner is helping to spread the Nordic-skating word in southern Vermont. Several years ago, he started shoveling a skating path on Lake Paran in North Bennington, spending hours—often with a few other volunteers—to clear a path the length of two football fields. Then last winter, he muscled his snowblower into his truck and cleared an even longer path, with a turnaround loop at either end. People heard about it and showed up to skate—and couldn’t help but notice the quiet, middle-aged guy in the blue jeans and windbreaker, gliding by on his extra-long blades. He’s since met a few other Nordic skaters in the area, and they skate together on Paran when they can. He also worked with Alisa del Tufo, the volunteer president of the nonprofit Paran Recreations Association, to raise $1,200 for a dedicated snowblower to keep the skating path cleared for as many winter days as possible. “Sandy is our cheerleader and skating weatherman,” says del Tufo, who’s working on a long-term campaign to raise $150,000 for a new boathouse at Paran that will double as a winter warming hut for skating and sledding. “He sends out e-mails to his skating friends, telling them when the ice is safe and the path is cleared. He’s been so generous with his time; you don’t often meet people who will go beyond talking, to just get out there and do stuff. But Sandy does.” 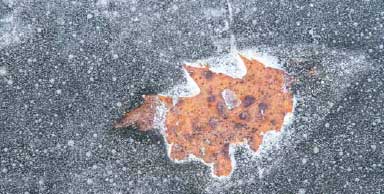 Sumner, 62, is a semi-retired woodworker who specializes in custommade cabinets, doors and windows. His wife, Marie-Pierre Huguet, is the assistant director of adult education at the Southwest Vermont Career Development Center in Bennington. Their cozy home, on a low hill looking south over Mount Anthony, is a testament to their shared interests: The basement is occupied by Sandy’s large, well-equipped woodworking shop, while their tidy yard is dotted with gardens. In the winter, Sandy’s woodworking business slows down, 3and he likes it that way.

“When the ice is good, I’ll head over to Paran two, three times a day,” he says. “I love the ice; I love how beautiful it is. How it freezes and crystallizes— the leaves that are trapped just beneath the surface, the cracks and the intricate markings. I love the silence, and when conditions are perfect and the wind is at your back, the skating is effortless. It’s the most exhilarating feeling I can imagine.”

“I just can’t let it go,” he says, looking out his living-window toward the lake. “This sport? Believe me, it does not disappoint.” ◊

Kathleen James is the editor of Skiing History magazine and the operations director of the International Skiing History Association (www.skiinghistory.org).