“You never see a runner with a smile on their face,” muses Victoria Silsby, the tanned, blonde woman waiting for the first racers to arrive. “Runners never seem happy.”

We are at the West River Run, an 11.6-mile race on the West River Trail from South Londonderry to Jamaica State Park. We’re stationed at a water stop near the Ball Mountain Dam, which is a little more than two-thirds of the way through the race. I have to agree with Victoria. In a race nicknamed “11 Miles of Trouble,” I expect few, if any, runners to be laughing all the way to the finish line. Even so, I quickly spot the first exception to the rule: a runner with a broad smile and easy laugh. But that’s because he hasn’t started running yet.

As the third leg of a relay team, Rogan Lechthaler is patiently awaiting his teammate’s arrival for the hand-off. Really patiently, because on a spring day this brilliantly blue, hurry just kind of melts away. Rogan’s wife, Abby, and their young son are lounging (in her case, at least) on a sun-soaked blanket just behind us, enjoying the type of day that, in early June, still feels like a miracle.

When I ask what he’s expecting from the course, Rogan tells me, “I did the middle leg last year, so I don’t really know this part, but I’m told it’s a lot of downhill which sounds great. We own a restaurant so we’re usually up pretty late, and this is about as early as I ever run. Downhill sounds good.”

Rogan and Abby own Ludlow’s Downtown Grocery; Rogan is the chef and Abby’s spirited presence fills the front of the house. They’re here thanks to one of the other members of Team Kelly Looks Great (named for a friend who raced with them last year). “Melissa’s big into the run community and is always dragging us out, which we love,” especially when it’s to this side of Terrible Mountain, says Rogan. “My wife and I are from Ludlow, but we used to live over this way, so to come over the mountain and see old friends is always fun.”

So far, Rogan has literally laughed in the face of the serious impression I have of runners. The racers currently jogging past us do have more intense expressions on their faces, but many manage to crack a smile as they hear the cheers from spectators and race volunteers. I stop to talk to another waiting racer, who I hope will show his serious side since he has already gotten a few miles under his sneakers today. He is James Maund, and is also relaying the race with his fiancée (now wife), Heidi.

“I ran the first part, she’s running the middle one—which we’re told is the hardest, up the mountain and down the mountain, so I left that one to her—and then I’ll run the last one.” His sense of humor was obviously still intact. After an interlude to cheer on passing runners, I asked James to tell me about the first section.

“The first section was gorgeous; the only hard thing was that I always go out too fast so by about a mile and a half in I was huffing and puffing. But it was perfect,” James adds, “it was flat, it was right along the river and in the shade. Everything about it was exactly what you want.”

Lynette Volden, who works at The Collaborative, encourages the runners

A pleasant run, with some easy parts and some challenging parts, is just what the race organizer, The Collaborative, intended. They put on the West River Run as an annual fundraiser (2015 will be the third year), and wanted to make the race accessible to all ages. Splitting the race into three segments of varying difficulty lets a family participate together by taking different sections.

A Collaborative Project
“ A piece of our mission is a healthy , involved community , and we always think of healthy ways to involve different pieces of the community ,” explained Maryann Morris, The Collaborative’s executive director “We feel like we’re accessing a different part of he community by doing something like the West River Run rather than our more traditional programs which focus more on aren education or youth substance-free events.”

Maryann’s goal is right on target —there’s a wide spectrum of people at the run, representing nearly all aspects f the communities surrounding Stratton. James Maund an his fiancée Heidi are here for the weekend rom Manhattan , staying at her family’s house, and just found out about the run the night before. People like Rogan live nearby but far enough away to be part of different community. Local representation is strong , too; on the course, there’s team of runners from The Mountain Goat in Manchester, students from Stratton Mountain School and people like Bob Stack , who are here just to do something outside with friends.

Partnering with the West River Trail was also a match made in runner’s heaven. The meticulously maintained trail was once the path of the West River Railroad which connected South Londonderry to Brattleboro. (The route was notorious for calamity and earned the nickname “36 Miles of Trouble,” a moniker the run borrows.) Major sections of the rail bed have been restored as multi-use trail, opening much of the 36 miles for year-round use.

The course of the West River Run, which uses the longest contiguous section of trail, is a mix of flat, wide rail trail and narrow, more uneven single track. On the shady rail trail, “the miles just cook along, and you enjoy every minute,” runner Anne Houser says. “The single track is hard but it’s also really cool. There are bridges and waterfalls, and actually, there was a runner that couldn’t resist and jumped in!

Restored by Friends of the Trail
The trail is the way it is thanks to the Friends of the West River Trail, which developed the trail and recently restored the disused South Londonderry Depot as a trailhead and public gathering space. The West River Run uses the Depot as a starting point, which is a plus for both organizations. “We could help them spread the word both about the trail and how much work they’d done to help it get together,” says Maryann.

A high level of community engagement is essential for The Collaborative, which strives to promote a healthy involved community supporting substance-free youth through programs, education and environmental strategies (like creating smoke-free areas). Their biggest program is called Refuse to Use, for which they partner with Stratton Mountain to give season passes to local middle and high schoolers. It’s not a free ride, though: students must pledge to be substance free and attend five prevention education events through the fall and winter, and their parents must pledge to support them. About 400 families participate each year.

“Refuse to Use is great, because it provides education, it provides a healthy alternative to substance use, and it also engages parents and kids in communication,” says Maryann. “We also have an afterschool program and a mentor program, so we’re trying to build resiliency in kids by expanding their assets.”

As in many, many other places, says Maryann, “all teenagers say there’s nothing to do in this community so we try to provide something to support that.” The Collaborative also arranges substance-free events for local students, like broomball at Riley Rink or a middle school dance.

Even if you don’t know a student attending a school in Manchester, Londonderry or Winhall, you might have seen—and benefitted from—The Collaborative’s efforts. They recently created a media campaign encouraging parents not to provide alcohol to their kids and have helped put up signs designating smoke-free areas in towns like Dorset.

Back at Mile 8, Victoria and I talk about that, too. She’s the Tobacco Prevention and Community Coordinator at The Collaborative, a job that puts her in all the microcosms of the community. She works with kids involved in Collaborative programs, adults, and local businesses, where she can help develop policies to create smoke-free campuses and provide resources to help employees quit smoking. “It can have a lifelong impact,” she says, “because now kids like Paige, or my son, or little kids, see fewer people smoking so there’s less chance that they will start smoking.”

Paige is a high school student who is with us at the water station, volunteering on her Saturday morning. She’s been involved in The Collaborative for years, attending and volunteering at events and working as a camp counselor at their summer camp. Paige boils her experience of The Collaborative down to simply “helping kids make good decisions,” and does feel that she’s helped make an impact, even if indirectly. 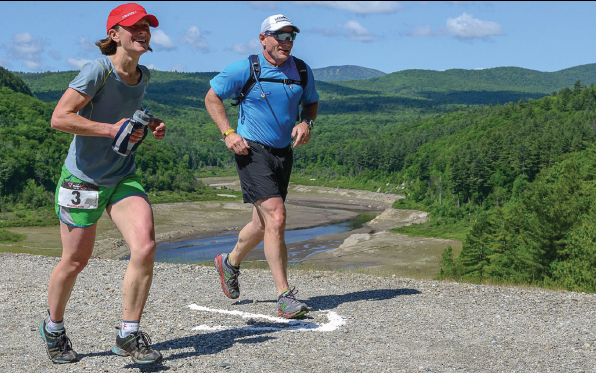 When the stream of runners starts getting thicker, I climb to the top of the Ball Mountain Dam, offering what I hope are encouraging words to runners as they pass. The top of the dam is probably one of the most scenic spots of the whole run. On one side, the Ball Mountain Lake is a wide, blue stripe between rugged cliffs, narrowing upstream into the ribbon of the West River; on the other side, the river looks whittled down and angry, and snakes away in rapids to disappear between the mountains. To the runners, the top of the dam also means it’s all downhill from here.

The last three miles are much like the first few, where the trail is wide, dirt-packed and mostly flat as it runs alongside the river in the former rail bed. The middle section (between the Winhall Campground and the dam) is more challenging: it’s a single-track footpath that weaves through hilly terrain and over mountain streams. Then, runners climb a steep, steady grade to summit the dam before taking narrow switchbacks down the back.

The meticulously maintained trail was once the path of the West River Railroad, which connected South Londonderry to Brattleboro.

At the top of the dam, maniacally clanging a cowbell, I meet Lynette Volden, an AmeriCorps member who works at The Collaborative. In between bouts of yelling encouragement and ringing the bell, she tells me, “It’s amazing to see how much the community can come together around an organization like The Collaborative and events like this.”

I don’t know if it’s the cowbell, or the view, or the knowledge that the finish line is near, but some of the runners going past us now—at one of the hardest parts of the race—still manage to look like they’re enjoying themselves. Many do have a fierce look of willpower and endurance, but they might let it crack with a half smile for a few moments.

The finish line is another story; it’s a little subdued but there is a sense of satisfaction and a rush of exhilaration every time a runner comes into the finish. I watch two young women tapping into some deep wells of energy, race each other to the end at a dead sprint (they finished at exactly the same time). There’s some debate about whether or not to jump into the swimming hole in the park, but as Rogan says, “it’s like ice cubes!” and I didn’t see any takers. I ask everyone what they liked about the race, and consistently hear that they enjoyed it. Katharine Ogden, an SMS Nordic skier and the first finisher today, says, “I really liked the trail in general, especially the single track section. I like running on single track; it’s entertaining, it’s fun.”

Clearly, even if they’re not smiling all the while, runners at the West River Run are still having a really good time. ◊

Meryl Robinson is a reluctant runner and marketer who lives in Brattleboro.