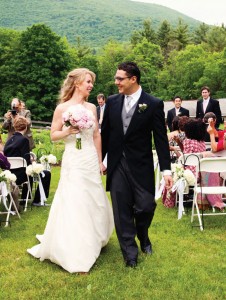 An adventurous spirit and interest in other cultures brought them together, but it was the unlikely event of an automobile accident that started Brooke Page Rosenbauer of Sunderland, Vermont, United States, and Wilson Ordoñez, of Quito, Ecuador, South America, on the path that led to their simple, elegant Vermont wedding last summer.

During her junior year at Brandeis University, Brooke studied abroad in Quito. Wilson is a second cousin of her host family’s two sons and that’s how they met. One day, after a wonderful day of sightseeing, Brooke and the boys stopped to get some ice cream. On the way home they were involved in a horrible car accident. Brooke’s injury required that she be taken to the nearest trauma center.

In the hospital, Wilson came to visit, and she began to see a new side of him. “He was very helpful and mature. He made me laugh. It was very healing having his spirit and energy with me,” says Brooke. When she returned home to the US to recover, Wilson was the first person who called to check on her. They shared a lot of laughs through email and Skype over the next year. During her senior year, Brooke made the decision to return to Quito to make her peace with the unpleasant memories she had from that country. She saw Wilson again. During an eight-hour overnight bus ride through the mountains to visit his apartment on the Ecuador coast, Brooke felt calm in spite of her fear of the roads, and fell asleep on his shoulder. Since she’s a vegetarian, Wilson cooked her a dinner of rice and veggies, and they spent time walking along the beach, talking, getting to know each other and becoming close. 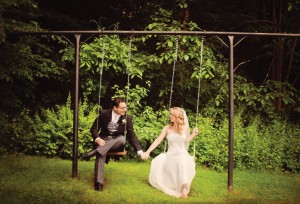 In March 2009, Wilson visited his host family in Portland, Oregon, where he had studied abroad in high school. For his birthday, Brooke bought him a plane ticket to visit her in Boston. Says Wilson, “She had a plan to get us together. I knew if I didn’t go see her then, I probably never would again.” That was it — they fell in love. That Christmas, Brooke visited Wilson and his family in Ecuador. He proposed on December 28, on the same beach where they had fallen in love a year before.

For three-and-a-half years they maintained an intercontinental relationship, sometimes going four months without seeing each other. It was a challenge, but they made it easier by setting their next date each time they met, and connecting through Skype. The time spent with each other’s families, sharing and exchanging cultures, was very meaningful. Wilson’s family even came to Vermont for Christmas one year, where they experienced a true Vermont winter and their first encounter with snow. A huge snowstorm stranded them for a few extra days and they went sledding on the Burr and Burton Academy hill. Wilson’s mom showed her own mother the snow via Skype and they both shed a few tears.

The couple knew they wanted their wedding, at the West Mountain Inn in Arlington, to be small and intimate, with 45 closest friends and family members. Three families—Brooke’s, Wilson’s and the Oregon host family, which is Asian-American—made it a truly international event.

Brooke’s mom, Margot Page, says she had nothing particular in mind for the wedding because Brooke was in total control. “She knew what she wanted; it had to be in her hometown in Vermont,” says Page. “She’s extremely organized; she made spreadsheets for each step, determined every penny of the budget, researched the vendors. She found her dress with the help of a bridesmaid, even made her invitations and the table decorations. She kept the whole flow going. I didn’t worry about a thing. All I had to do was prepare the peonies from my gardens and host the rehearsal dinner,” a BBQ picnic at her home in Sunderland.

For the ceremony in the inn’s Spiral Garden, they chose a minimum of decorations, says Brooke, “to allow Vermont’s beauty to show through.” Wedding party colors were blush pink and white, to reflect Page’s peonies. Officiate was Brooke’s uncle, Jim Reynolds, from Concord, MA. Photographer was Celia Kelly. Floral arrangements in addition to the peonies were by Nancy Bishop of East Arlington. Ring bearer was Brett Rosenbauer, Brooke’s half-brother.

Brooke and Wilson designed two simple gold bands from Wilson’s parents’ original wedding bands, since they had gotten new ones for their recent 25th wedding anniversary. Her engagement ring came from his grandmother, who had bought the ring when Wilson was born and saved it for this occasion.

Bride and groom had three attendants each: Brooke’s best friend from Vermont, Stephanie Spencer; a friend from Brandeis, Kim Fraser; and her cousin, Julia Reynolds. Wilson had his two host-family brothers, Derek and Jered Yagi; and Kim’s fiancé, Ben Chase. Music for the ceremony was by Brooke’s friend Amanda MacLellan, who played ukulele and sang. Wilson’s sister Yanella read a Pablo Neruda poem, “Canción de Amor” and Stephanie read Shakespeare’s “Sonnet 116” (“Let me not to the marriage of true minds/Admit impediments…”).

Everything, from the wedding vows to the reception toasts, was recited in both Spanish and English. To Brooke, “it was really important to share our love with everyone.” Says Page, “It was so inclusive and lent an international aspect to the event that truly deepened it.” Communication was a challenge, but everyone managed happily with lots of gestures and “Spanglish.”

During the ceremony, they heard claps of thunder in the distance, but the rain held off until near the end of the cocktail hour. Everyone grabbed the clear umbrellas the bride had thoughtfully provided—just in case—and ran to the barn for the reception. Rather than ruin the ceremony, Page calls it “a delightful adventure.” Brooke says the rain made it “magical–and the umbrellas looked great in the photos!”

The only real “glitch” was, in the end, a funny story: Brooke walked down the aisle, and when she got there, Wilson whispered, “Where’s your veil?” She had forgotten to put it on. She looked to maid of honor Stephanie, and whispered with a goofy smile, “Veil!” Stephanie heard “vows”, however, and started to race back to the inn to retrieve them before she finally understood. “For those who remember our hijinks from middle and high school,” says Brooke, “it was a classic Brooke-and-Stephanie moment.” Immediately after the ceremony, Stephanie brought the veil back for later photos. 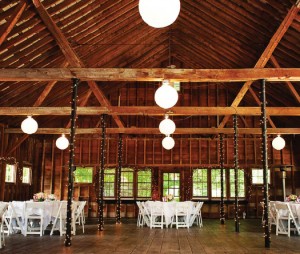 Decorations for the reception in the barn were also simple but elegant– white tablecloths, white fairy lights and globe lights, white and blush peony arrangements. On a side table were Wilson’s favorite American foods, brought by two college friends as an inside joke: Froot Loops cereal and Cheez-It crackers. Music was from Wilson’s iPod, a mix of Latin and international music. Favors were handmade boxes of Ecuadorian wood filled with Ecuadorian chocolates.

For the meal, the West Mountain Inn served meat and vegetable kabobs, cheese ravioli with marinara sauce, tortellini with pesto, and salads. The cake, made by Dina Bronson at Bistro Henry, was lemon with lemon icing and raspberry filling. And, since Brooke had worked at Ben & Jerry’s, a Ben & Jerry’s ice cream cart was donated by John Rindell as a wedding gift; he and his wife attended as guests.

Highlights during the reception included two Ecuadorean traditions: crazy hour (hora loca) and the garters (las ligas). For hora loca, they brought in boxes of costume props from the dollar store: horns, eyeglasses, leis and necklaces. People were encouraged to dress up and “let go”, forming a conga line and dancing to the lively Latin music. Americans quickly fell into the spirit, says Page. “It was very merry. It brought a zest to this small, elegant wedding celebration. Ecuadoreans have a very warm, passionate culture. And they are very good dancers!”

For las ligas, Brooke wore four garters instead of the American tradition of two, one of which gets tossed into the crowd to the lucky male recipient. For this version of the ritual, Brooke and Wilson chose three couples. The girl stood on a chair and the guy had to dance up to her and put the garter on her while she balanced on one leg. Brooke decided to make the game a little more interesting by handing the girls either candles, water glasses or ice cream scoops to hold while they tried to balance amid all the laughter. Everyone enjoyed it, says Brooke, except for her uncle and father, who were a little skeptical about the whole thing.

The couple honeymooned in Lake Placid, NY, at the Mirror Lake Inn. Brooke now works in Washington, D.C. for Partners of the Americas, a non-profit organization doing international development in Latin America. Wilson just finished his studies in international relations and diplomacy.

As Page reflects on the event, she says, “I think everyone who attended realized the wedding celebration was a wonderful ending to a long road of distance and uncertainty. Brooke and Wilson have a very deep bond because of what happened that afternoon in Quito and because of their courage to get through this journey. Their relationship thrives today because of that bond, their commitment, their love and their dreams.” ◊

Kristin McDonald, a true romantic, writes of amor–and other things–from her home in Bennington.