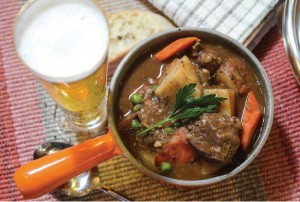 You may already realize that a wave of craft beers has swept the US of A and little old Vermont appears to be on the crest of that wave. Today the explosion of small breweries and brewpubs that began in the 1980’s just continues to increase. Nowhere so abundantly as in Vermont. This fact made me very curious to see what the excitement was all about and so a fellow foodie and I went on a self-conducted tour of some of the Vermont breweries.

We viewed brewing processes and tasted samples all over the state, and were quite impressed with the sheer number of brews being produced here, as well as the variety, the depth of flavors and the difference in alcohol content and bitterness units. A brewery may offer as many as ten year ‘round brews with additional seasonal brews. There are very light lagers, good for thirst quenching, and deep dark ales with the tastes of caramel, chocolate and roasted wheats, oats and barley. The seasonal brews may contain pumpkin or berry flavoring with various herbs and spices.

Of course my main focus during this tasting tour was to determine which flavors would be the best to use in cooking, as well as what beers to drink with various foods. Not being a beer drinker per se, and much more accustomed to cooking with wine, I had to really search for recipes containing beer. I came up with some from my files, but also tapped fellow cooks and searched on line and in cookbooks for the rest.

Most recipes using beer come from Bohemia, Germany, England and Belgium. Of course our local breweries and brewpubs all have menus that feature dishes to accompany beer or are made with beer as an ingredient. If you’re cooking with beer at home, here are a couple of things to consider. Similar to cooking with wine you would use a beer to drink or to cook with that is complimentary to the dish you are serving. For instance a lighter beer would be added to a chicken dish and a darker more full-bodied beer to a beef dish. The breweries usually publish a list of their brews and the foods to “enjoy with” their products. Of course there are always pretzels.

Touring the local breweries was a real eye opener for someone who has never been much of a beer aficionado. If you are like me and have been wondering about the new wave of craft beers, just visit a local shop that stocks beer, and peruse the selection you’ll find there. The extent and variety of the offerings is impressive. Plus most shop owners are quite knowledgeable and will help you decide which brew might appeal to your tastes.

If you don’t care to go it alone then the Fullerton Inn in Chester offers a “Vermont Brewery Tourery” that goes as far afield as Burlington with stops along the way. And, if you want something closer to home, you can visit Bennington or Brattleboro for a brewery or pub stop. Just go on line and you will see that Southern Vermont is full of beer. Northern Vermont is even fuller. A short word to the imbiber, most Vermont brews are not pasteurized and so have a shelf life, therefore try to use before the expiration date on the bottle. And bon appetit.

Cream butter with cheeses and Worcestershire. Pack into a crock or bowl and chill two hours before using.

Melt butter and sauté onion till soft, about 5 minutes. Mix in shrimp and all ingredients. Simmer till shrimp turns pink. Remove from heat and let sit in broth for ½ hour.

To serve: remove shrimp from broth and serve warm with a butter dip.

NOTE: Shrimp may be refrigerated in broth a day ahead and reheated before serving. Broth may be reserved or frozen for recipes such as gumbo.

Cook all ingredients in a saucepan over low heat till smooth. Add egg yolk off the fire.

Put toasts or Zwieback in a pan and pour cheese over all. Brown in the broiler. Serve hot.

Melt cheese and butter in beer over a low fire till smooth. Add the mustard and pepper and stir thoroughly.

Pour over toasts and serve immediately.

NOTE: Welsh rarebits may be topped with sliced tomato or crisp bacon slices.

CHICKEN IN BEER
(a French Farmhouse recipe)
(Serves 4 to 6)

Brown chicken pieces in olive oil for about 5 minutes per side. Remove to a plate. Season with salt and pepper to taste.

Add sliced onions to the same pan, add more olive oil if dry, Cook till translucent, about 8 minutes. Sprinkle flour over onions and cook 2 to 3 minutes. Add beer, bay leaves and thyme, stir together, bring to a boil, than add chicken.

Reduce to simmer. Cover and cook till chicken is cooked through, about 45 minutes. Remove chicken from pan and reduce sauce by half. Return chicken and keep warm. Serve with garnishes as follows.

Cook onions in butter about 5 minutes then add mushrooms and cook 5 minutes longer. Add crumbled bacon and parsley, salt and pepper to taste. Spoon over chicken and serve hot.

Brown salt pork dice till crisp and golden. Drain on paper towels. Pour off all but a thin layer of fat from pan. Shake beef chunks in a bag with flour, salt and pepper. Brown with all of flour in remaining pork fat. Remove to a casserole or to a crockpot when done.

Cover and cook in a casserole over medium heat about 2 to 3 hours or in a crockpot on high about 4 hours till beef is very tender. Add more beef stock from time to time if dry or uncover and cook the last half hour if too much broth. Adjust seasonings.

To serve, garnish with pork dice and parsley and serve with egg noodles.

BEER BATTER FOR DEEP FRIED VEGETABLES
(Can be used for fish, etc.)
(Good for a head of cauliflower or 1 Pound chicken livers)

Sift together flour, salt and pepper, stir in oil and beer and egg yolk. Let stand covered for about 3 hours at room temperature.

Fold in egg whites that have been beaten fairly stiff.

Dip vegetables in batter and deep fry in hot peanut or canola oil at about 365 degrees till golden. Drain on paper towels and serve hot. ◊

Barbara Little is, as she says, a foodie, a cookbook author, and a regular columnist for STRATTON MAGAZINE.